Christmas has come and gone, it’s a new year with loads of new games on the horizon, and it’s time to update your wishlists. Ready your wallets!

Caravan was a much-hyped title by Emerson Matsuuchi (Specter Ops), available in two different themes – Crystal Golem and Spice Road – to be published by Z-Man Games. Well it seems that Asmodee’s acquisition of Z-Man in 2016 created some changes – the game has now been completely rebranded to Century and will be available in 3 different themes (Spice Road, The New World, Eastern Wonders) – all to be published by Plan B Games and Nazca Games.

Spice Road will be the first be released:

Century: Spice Road is the first in a series of games that explores the history of each century with spice-trading as the theme for the first installment. In Century: Spice Road, players are caravan leaders who travel the famed silk road to deliver spices to the far reaches of the continent for fame and glory. Each turn, players perform one of four actions:

It has been mentioned as a potential Splendor beater – a 2014 Spiel des Jahres nominee. It’s also worth noting that if you were looking forward to the Crystal Golem variant, that it hasn’t been completely abandoned – Matsuuchi mentioned in a Boardgamegeek post that it may be resurrected if the series sells well enough. 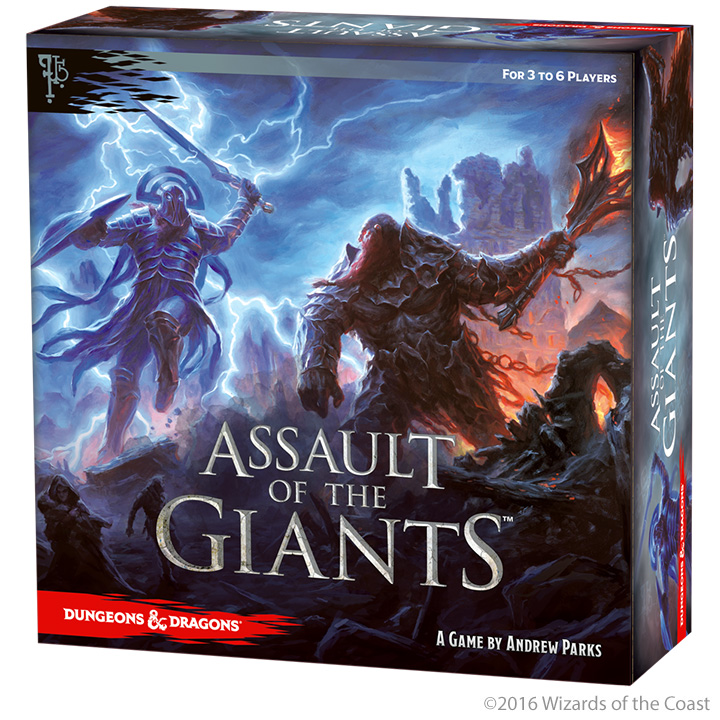 2017 looks to be a busy one for Wizkids, with many new games planned for release. The big one will be Dungeons & Dragons – Assault of the Giants from Andrew parks, designer of Core Worlds,  D&D: Attack Wing and…. Office Space: The Party Game (How much fun can TPS reports be?).

Each player issues commands to his or her giants in the form of command cards (recruit, move, attack, pillage, and so on). This allows players to recruit new giants, send them out to attack settlements and other giants, and also to pursue special agendas based upon their race. For example, the Storm Giants seek to restore their lost monarch, King Hekaton. The Cloud Giants seek an ancient dragon treasure trove, and the Hill Giants seek an abundance of food with which to feed their massive monarch, Chief Guh.

In Assault of the Giants players send their giants out to wage war on each other and the small folk, but the game’s real strategy lies in each player’s ability to pursue their giant race’s unique agenda, not only through combat but also through clever cardplay.

Assault of the Giants will be available in two versions – the standard edition and the Premium Edition in which all the Giants miniatures are fully painted. 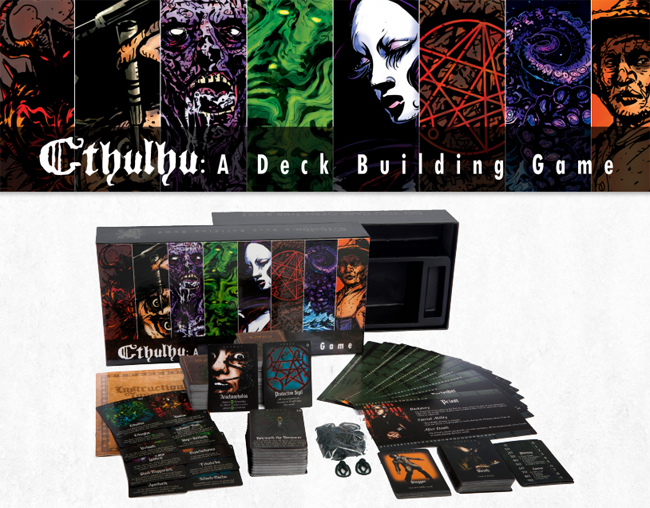 Following on the heels of FFG’s Arkham Horror The Card Game, a new Cthulhu-themed game is on its way in the form of Ninja Division’s Cthulhu: A Deck Building Game. 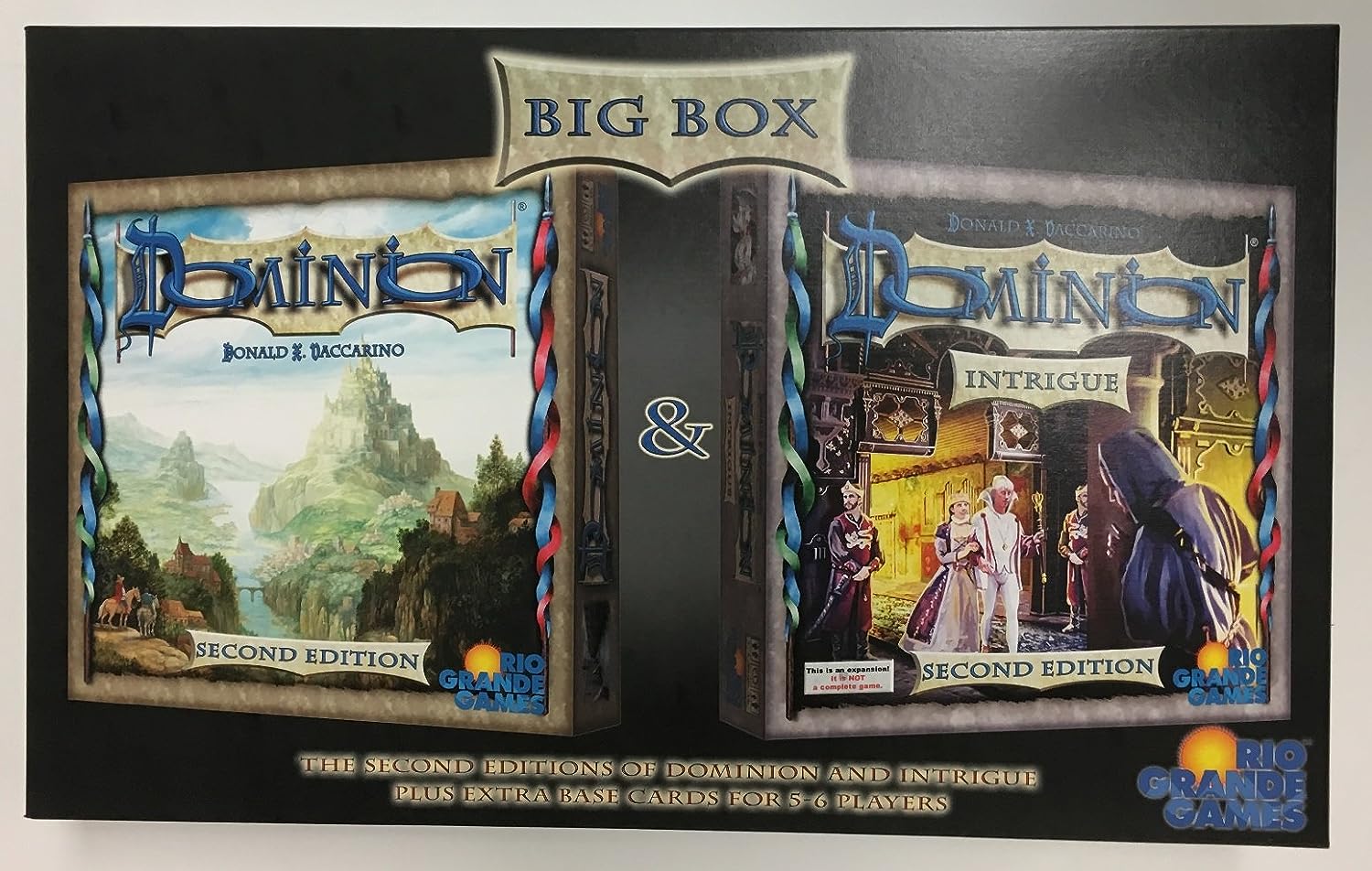 If for some reason you’ve never heard of Dominion, this is the game that just about single-handedly popularised the deck building genre (and spawned a range of similar titles). 9 years after its original release, it still continues to sell, and a new “Big Box” version is being released this month to hook more players:

The Other Side is a steampunk-themed wargame from Wyrd Games, featuring  preassembled miniatures and a set of streamlined rules.

The Other Side is a cinematic wargame by Wyrd Miniatures that combines streamlined rules with the tough, tactical decisions and ruthless combat that are a staple of modern miniature gaming.

Players take control of a company of troops ranging from powerful commanders to massive titans to rank and file squads. The Other Side miniatures come preassembled, which means you can go directly from the box to the table.

This project has been a resounding success, easily reaching its $75K funding goal and has now surpassed $265K with 8 days still left to go.

Archon Studio brings us Vanguard of War, a tower-defense style game in which 1 to 4 players attempt to hold off a demonic horde, till they can activate an artifact and save the world. The miniatures alone might be worth the $110 price tag.

Vanguard of War (VoW) is a 1-4 player game focused on the defense of a small church deep inside the decaying ruins of a once great city now known only as “the Whispers.” Players will use their heroes to hold the line against seemingly endless waves of demons while their allies inside the church desperately attempt to learn how to use the fel army’s own doomsday weapon against them.

Needing a total pledge of $45K, Vanguard is currently sitting at around $165K, and still has almost three weeks left to run.

The digital incarnation of Mysterium was first announced back in November 2016 by Asmodee Digital, and now we finally have a release date – today! From 12 January 2016 it will be available on Steam, iOS and Android. 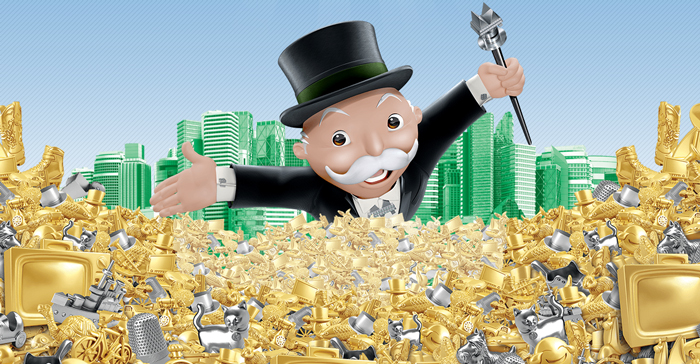 Monopoly is ready for change, and it needs your help.

Hasbro wants to change the iconic player tokens included in their next set, so head on over to the Monopoly Token Madness website and pick your favourite 8 tokens. The tokens that receive the most votes will be placed in the latest Monopoly set. Choices include the classics like the race car, and new tokens like a t-rex, a computer and a smiley emoji to name a few.

This week on CBQ Stuart finally managed to get his hands on the Knizia classic Schotten Totten, and tomorrow Paul will be reviewing Inis.

That’s it for news this week, good gaming all.