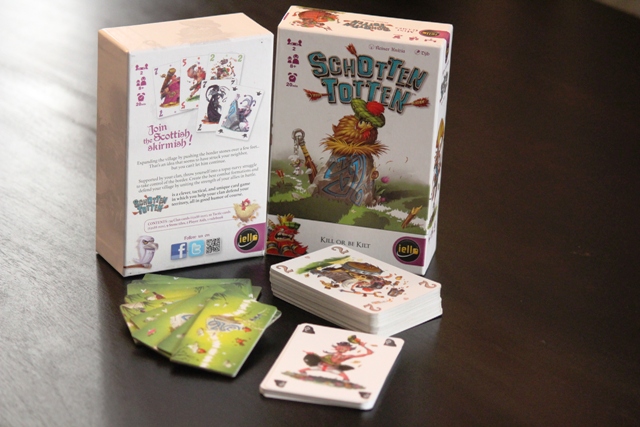 What is it? Pull up yer Kilts, shake off the drunken haze and assemble yourself on the border! The Snow be melting and this be our chance to roll those territory marking stones a wee bit further to extend our village's pastures for the coming farming season. We'll just need to roll half of the stones and no one will be the wiser, neither lad nor lassie!

We love Iello’s mini games collection that they have been unpacking from the toy box at the foot of their bed. Last year, we couldn’t get enough of the push your luck game of chicken that was Welcome to the Dungeon and after hearing so many great war stories of BattleLine (the GMT ancient war retheming of the original Schotten Totten of 1999), when Iello announced the new version of Schotten Totten I immediately ordered what I’d heard to be a two player classic. 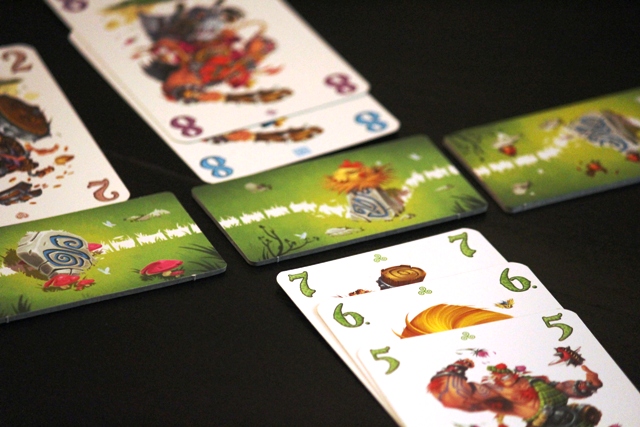 So what is this game with the ludicrous name that sounds like it was spat straight from the lips of a drunken Scotsman? In Schotten Totten players will compete for majority control of the nine stones that mark the borders of your clans territory. Each player will start with a hand of six cards, from a draw deck that contains 54 cards, 6 different colours labelled 1 through 9. Alternating playing a single card at a time, you’ll place cards behind a stone on your side of the battlefield in an attempt to overwhelm your rival and claim the stones. Play a card, draw a card, curse about the card you just played. To successfully claim a stone, players will make the best possible 3 hand set on their side of that stone in poker style combinations. If you can prove using the cards already played in front of stones that your combination of three cannot be beaten, you may claim that stone to your side of the table. Once you’ve either claimed five of the nine stones on the battlefield or claimed three adjacent stones your clan is victorious! 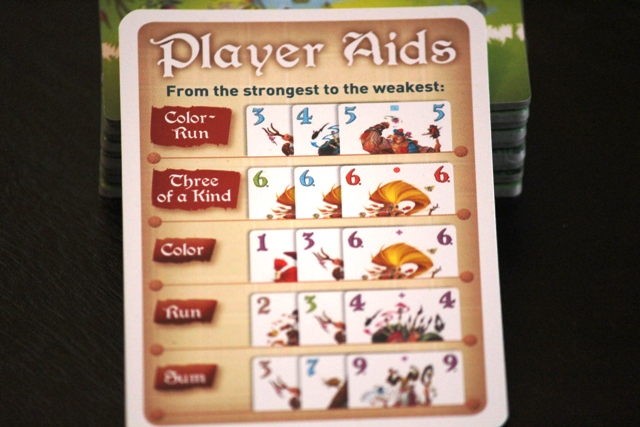 You’ll furrow your bristling red headed highlander brow and stroke your beard while you stare at your cards deciding where to place your troops in order to make the best possible combination to overpower the enemy forces. The best combination is a Colour Run (3 cards in numerical order of the same colour), then 3 of a Kind, Colour (all three cards of the same colour), Run (cards in numerical order) and lastly simply the sum of the 3 cards placed. In case of tied combination superiority, highest number played in the case of both players placing three number 9 cards on opposite sides of the stone, the player who played his third card first will overpower his opponent by getting in the first push on the stone! 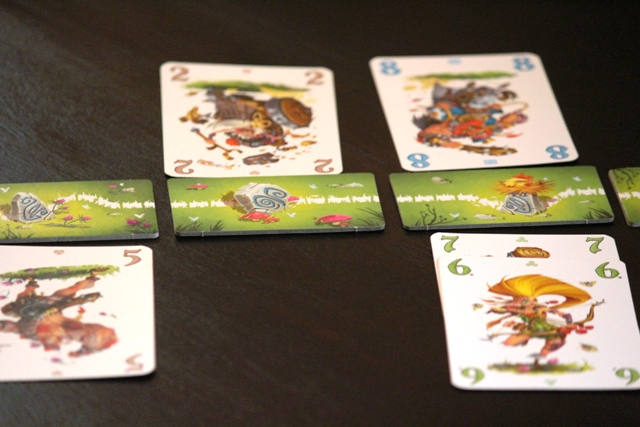 Schotten Totten is a back and forth 2 player head to head game that takes you through a vegetable dicer of emotions. Initially as you stare over the battlefield you’ll feel apprehension as you look into your hand to decide what to play. Should you play that second 9 going for three of a kind while your opponent has his two red clansman on their side of the stone and hope that in coming turns you draw another 9? Or are they laughing at you with the last two 9 cards in the deck in their hand? Do you finish off your final combination at one of the stones and show your final assortment of troops there already and scare them off? Do you just randomly place an “unnecessary” warrior at an open stone place just to hopefully draw that card you want? Fear of failure then sets in as you realise that you may have given away information that your opponent can thwart you with. With the drawing of a new warrior you’ll watch as your opponents face goes through the same cycle as you smile and analyse the combinations of cards scattered across the battlefield. 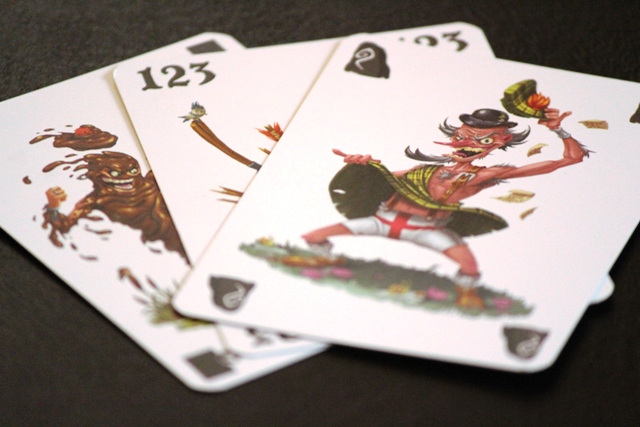 Like many tactical 2 player games, Schotten Totten has you deducing every play, analysing every card and trying to foretell combinations that are only good enough to win each stone to free up further combinations for other stones. Miss some clear piece of knowledge and your opponent can punish you for it while the delicate balance of lady luck’s cards keeps most games on dual spikes. A single game lasts around 15 minutes with variants for scoring best of 5 or even playing multiple games and keeping score of how many stones were claimed in each game and tallying totals at the end of multiple games. This new version also comes with an assortment of “super powered” tactics cards that create an advanced version of the game. These include Jokers, a card that can be either a 1,2 or 3 and a even a play that forces players to make a combination of 4 cards for that stone. Tactic cards come from a separate card deck with each player starting with 1 in hand. However you can only play one more tactic card that your opponent, so should your opponent never use a tactic card, the game balances itself by never allowing you to play any more to keep a level playing field.

Staying true to its roots, Iello’s production quality of the new version of Schotten Totten is stellar. The art is a vibrant cartoonish depiction of Scottish stereotypes that will leave you smiling as you place them on the battlefield. Card stock is fantastic and the cardboard pieces depicting the stones are high quality and durable through a number of plays. All of this in the typical Mini games box and we’ve been given another great 2 player game that can be played anywhere. 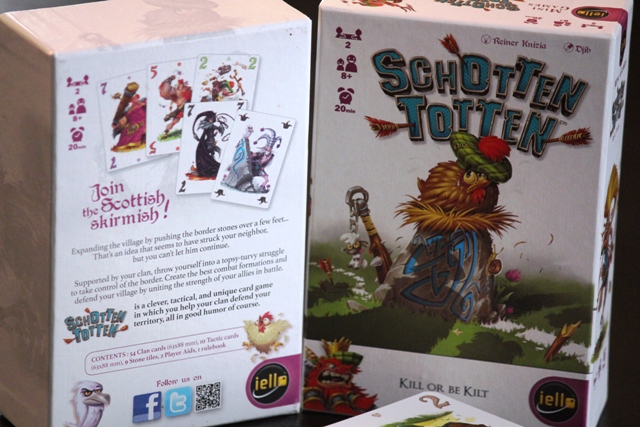 While I always try to pick something negative about a game, I’m really failing with Schotten Totten. Granted, no game is everyone’s cup of tea but this game is accessible to players of all experience levels, the art and production is amazing, it’s a game with simple rules but deceptive complexity that makes every play feel like it matters, it’s playable everywhere in short periods of time so it never overstays its welcome and has multiple play modes with the tactics cards. All of this for one of the cheapest price points on the market. If you like great 2 player games, just get it already. I know Paul played it once and has already ordered his own copy. 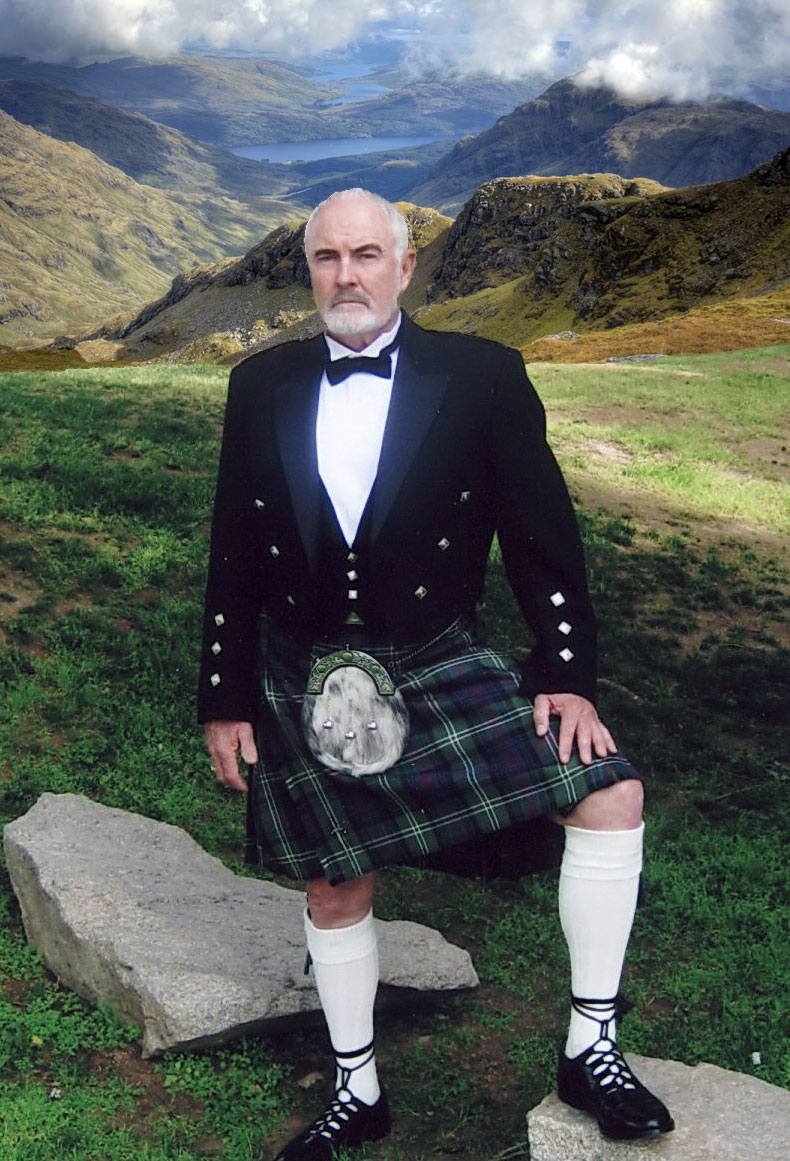 Whether its my heritage, love for colourful cards, great two player games or simple rules that create fantastically complex decisions but its clear to me that Schotten Totten is one of, if not the, best two player game I own. For anyone who plays 2 player games, or wants to, just buy two copies of this game. One of the best ways CBQ could have started 2017.