Welcome to our regular news article, but in a different time slot as we prepare to release a fresh batch of reviews (more details at the end of this article).

An image of a Dead of Winter expansion has surfaced. This was taken at the Nuremberg Toy Fair, and posted by Gioconomicon magazine on their Facebook account. If you look at the description on the box, you’ll notice it says it is a “Stand-Alone Expansion”. All we know is that the game is currently still being playtested, with no confirmation on a release date.

Also seen on the Gioconomicon page was a photo of a  Cthulhu-themed Pandemic title called Pandemic: Reign of Cthulhu, published by Z-Man Games.

Last week Portal Games announced their 2016 lineup. Not the first of the games to be released, but the one we’re most excited about – First Martians: Adventures on the Red Planet (4th quarter) takes the mechanics of Robinson Crusoe: Adventures on the Cursed Island and gives it a splash of sci-fi paint. There will also be a companion app to “maintain the balance and challenge throughout”.  The game will have two different modes – a custom campaign mode, and an open world mode where players attempt to survive for as long as possible. 51st State is a remake of a 2010 title, in which the world as we know it has been decimated, and players attempt to rebuild civilisation. And lastly, Cry Havoc is a area-control game card-driven war game – not much more is known, we’ll update you as soon as we hear more.

Bezier Games are releasing America by Ted Alspach and Friedemann Friese (he of Power Grid and green hair fame). It’s a party / trivia game based on 2014’s Terra, which was in turn based on 2009’s Fauna. Obviously the focus of this version is solely on the US, with subjects like pop culture, American history, sports and more. America releases at Gencon 2016 (August). **** yeah.

You thought the murder was solved, but you were…. dead wrong. Mysterium: Hidden Signs takes you back to the mansion where the ghost becomes restless once again. This expansion will feature new characters, locations, objects and vision cards. The release is not known yet.

Gingerdead House is a tower defence board game for 2-4 players, set in the Grimm’s Fairy Tales universe. You bought a gingerbread house in the middle of nowhere, and now you’re being attacked from all sides by witches, trolls and monsters. This project has been successfully funded with more than 20 days still left.

Tasty Minstrel’s latest project is Thief’s Market, a dice drafting/stealing game for 3 to 5 players. This project has also been funded already, generating a whopping $85K (original goal was $20K), and it still has more than 10 days to go.

Digidiced, developers of the Le Havre app, is creating a Patchwork app. The release date is pegged at somewhere towards the end of February. 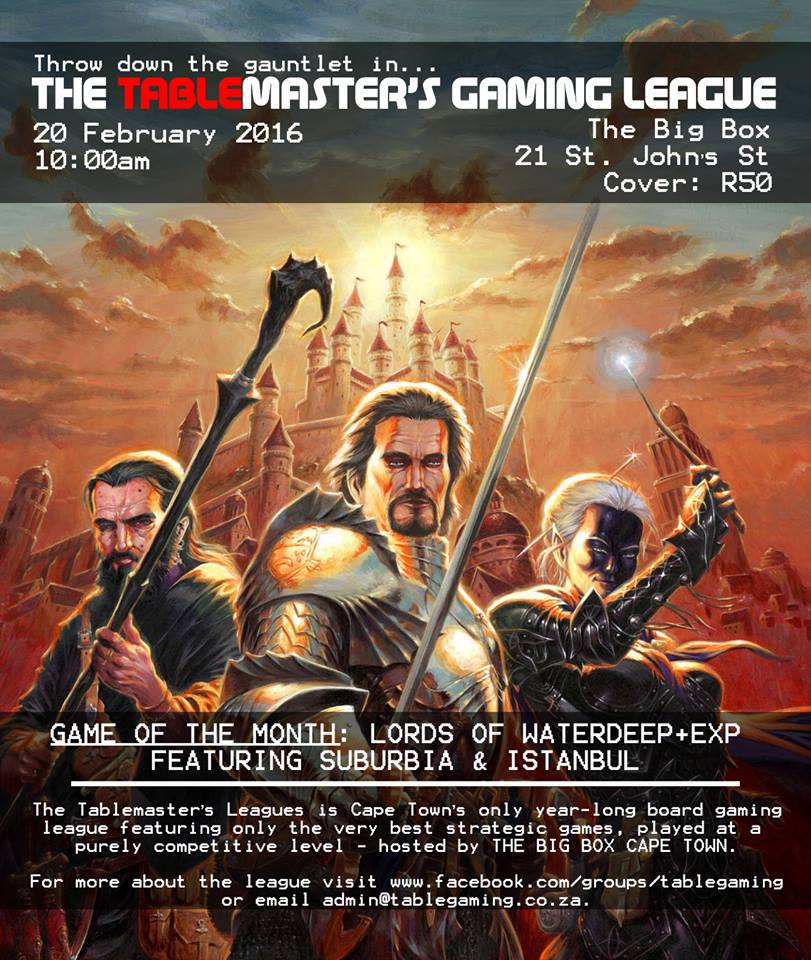 The Cape Town Board / Card Gaming group has announced a new series of events – The TBGL (Tablemaster’s Board Gaming League), hosted by The Big Box Cafe. Each month there will be a different set of games to compete it, and you will be scored on all your results. The top 3 gamers for 2016 will receive their share of “considerable prizes”. The first games have been announced: Lords of Waterdeep (+ Scoundrels of Skullport expansion), Istanbul and Suburbia. R50 gets you an entry into the league.

A big thanks to Etienne Koekemoer who is designing a browser-based app for sourcing games from local suppliers. It’s still in pre-alpha version but the basic functionality is in place. If anybody wants to assist, check out the source code here.

This week on Cardboard Quest we’ll be bringing you two new reviews – Paul’s views on the third edition of Runebound, and Stuart tries to pawn off worthless Hitler paintings in Operation Faust.