The Really Awesome Gaming Expo was always going to make for a difficult first time experience. Somehow contriving to leave my camera’s battery at home wasn’t a good start, for sure, and having to approach the event with a journalistic bent whilst every booth screams for rapt attention is tricky. Compounded by my love for both the cardboard and console based hobbies, I knew from the moment I set foot on the sprawling convention floor that time was going to make me her whipping boy – too much temptation, far too few hours in the day.

As it turns out, the digital delights on offer this year were mostly underwhelming, which meant I could dedicate most of my two days to steeping myself in the atmosphere of the Unplug Yourself area, which rightfully found a home in the center of Joburg’s Ticketpro Dome. Without having attended previous events, it’s difficult to gauge how much of an increase in presence board gaming had over 2014, but from chatting to attendees and exhibitors, the consensus was certainly that 2015 was the best year for board gaming yet. 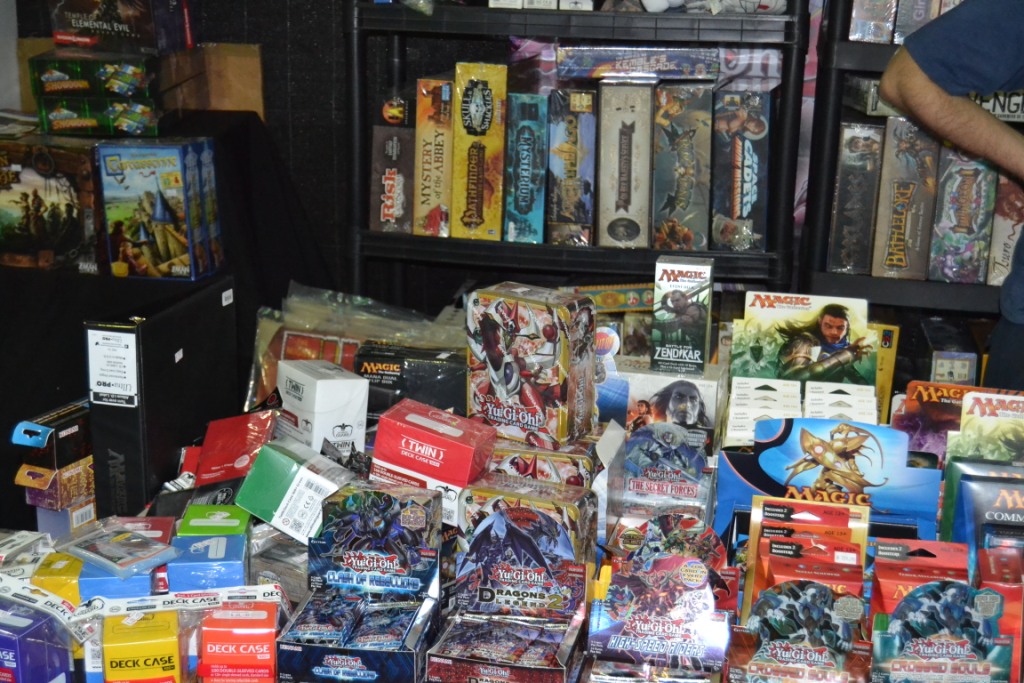 And beyond the real-estate, the rapid rise of the hobby was evident in the eyes of gamers at the tables, in gamers at the booths wrestling with that eternally taxing purchase decision, and even in those of the sales-assistants – which were slightly wider and a little more terrified. As exciting as it was to be able to experience some of the games being demoed, and to witness the incredibly diverse games on offer, my lasting impression of rAge 2015 will be of the people involved in our hobby. Seeing those demoing games as excited as those learning them for the first time, the diversity of the attendees – young, old, guys, gals – it was genuinely exciting to just how many folks are interested in exploring what our hobby has to offer.

CCGs and LCGs were, as at most conventions, present in full force. Netrunner, MTG, Yu-Gi-Oh – all were being played from sunrise to sunset. One card game in particular piqued my curiosity, namely Game of Thrones: The Card Game 2nd Edition. And when I say ‘piqued my curiosity’, what I mean is that I’ve been wanting to play this for weeks now and made a beeline as soon as I saw it at the table. Not having played the 1st Edition, I was nevertheless still aware of its popularity, and even more aware of how many improvements had allegedly been made. 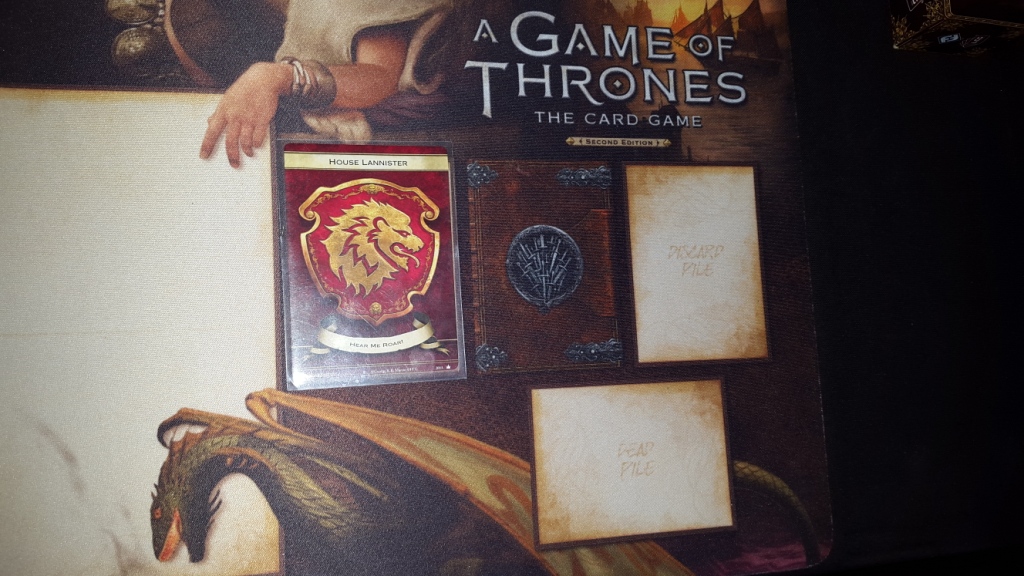 Zuma is clearly not a Lannister…

I won’t go into much detail, as CBQ will be previewing the game in full shortly, suffice to say that the game is as thematic as I’d hoped it would be. I do own the Lord of the Rings LCG, so to give you an idea of just how cleverly the theme is implemented, I’ll explain it thusly. LotR, whilst still being an excellent deck-builder, oozes theme in a way that mainly relates to the artwork. You’ll see plenty of locations and creatures and characters that you’ll know and love from the lore, but the cards don’t interact in a way that is uniquely LotR related. Whereas with GoT, the abilities of the characters, the objectives, the variation in playstyles provided by the factions – everything screams betrayal and intrigue and tragedy in a way that is uniquely Game of Thrones.

I lied. This is such a House Lannister thing to do, I know. There were in fact TWO cardgames that lived up to initial expectations. The second is a little known publisher’s first foray into the LCG market, although technically not their first deck-builder. Well, Plaid Hat Games can’t really be referred to as ‘little known’ anymore, and Ashes: Rise of the Phoenixborn was one of GenCon’s most anticipated releases. Up close, Ashes truly is a fine looking game. The iconography is pleasing to the eye, the artwork is simply sublime and all set up the game had many an envious stare thrust upon it. Of highest concern, was to see how similarly Ashes plays to MTG, which which it has been frequently compared to.

When Gotham is Ashes…

How fair is that comparison? Well, not much, would be my answer at this stage. Ashes lends itself far more to the kind of gamer not interested in spending countless hours crafting a particular deck. It’s too early to tell whether the game will perform well within a more professionally competitive environment, but it had more in common with the card play of Mage Wars than it did that of MTG. The other glaring difference is the presence of the dice which essentially operate as mana. You’d surmise that this would introduce a greater element of luck, and you’d be right, but there are various ways in which you can mitigate a poor roll. The dice also allow for more options, which means there are less instances of being screwed over by a poor draw. We’ll also be covering Ashes in more depth over the next few weeks.

Some of our readers may recall our recent Blood Rage preview, in which despite the glowing endorsement, I did have a few concerns. After getting the chance to play the game for a third time, I’m pleased to say that some of those concerns did prove to be baseless. Cards were used in combos I hadn’t seen before, and highly effectively too, and where I had initially felt that the ships were largely ineffectual, this was purely because I just hadn’t made the necessary connections. There is so much game in the box in terms of variable strategy and replayability – I still haven’t won a game, but Blood Rage remains firmly on the wishlist. 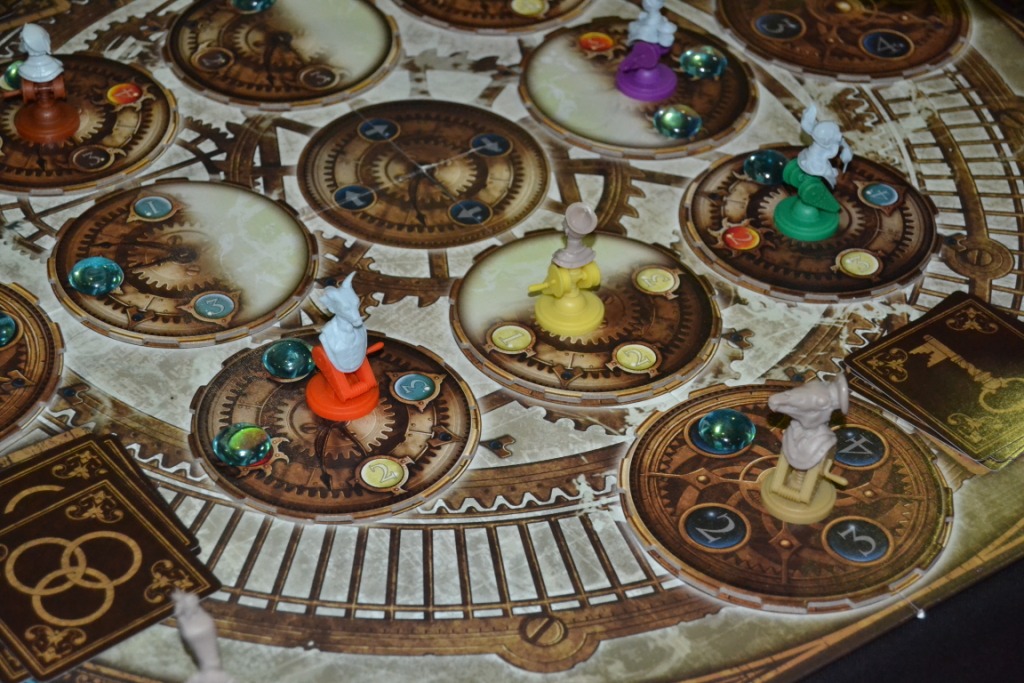 Seeing photos and video reviews of World of Smog: On Her Majesty’s Service had certainly gifted me the impression of a sumptuous looking game, but seeing it up close and personal – well, the game is even better looking than I’d imagined. And though the theme could be divorced from the gameplay without anyone really noticing, I appreciate that the designer took the time to create a backstory for the characters. Because let’s face it – members of an avantgarde alternate London society racing to claim magical artefacts from the fiendish Shadow Market to gain the favour of Queen Victoria? Sold! The game is quite unlike anything I’ve played before. It’s not the first title to implement rotating tiles, but I can’t think of any Euro game that implements them in a manner that encourages chaos like this. I’ll definitely need a proper game of Smog, as there were certain elements that didn’t feel balanced, but CBQ will endeavour to post a proper review sooner rather than later.

Mysterium was arguably the game of GenCon 2015. Not due to universal acclaim, or even it’s position on the BGG Hotness list at the time, but rather due to how quickly copies were snatched up, and the volume of the buzz that followed the game around everywhere. For those not aware of the basic concept, Mysterium takes the lateral thinking and creativity infused in Dixit, and attempts to extract a little more game out of it by fusing it with Cluedo. This particular version is a reinterpretation of the successful Tajmenicze Domostwo, which keeps all of the original game intact, but adds an extra step – a straw poll which attempts to make the game a little more competitive by declaring an outright winner. The new components and reworked graphic design are impressive, but I’m not yet convinced that straw poll was a necessary addition. If you enjoy the concept of Dixit, but find the pressure of grasping just the right way to word your clues a little daunting, this might be the game for you. 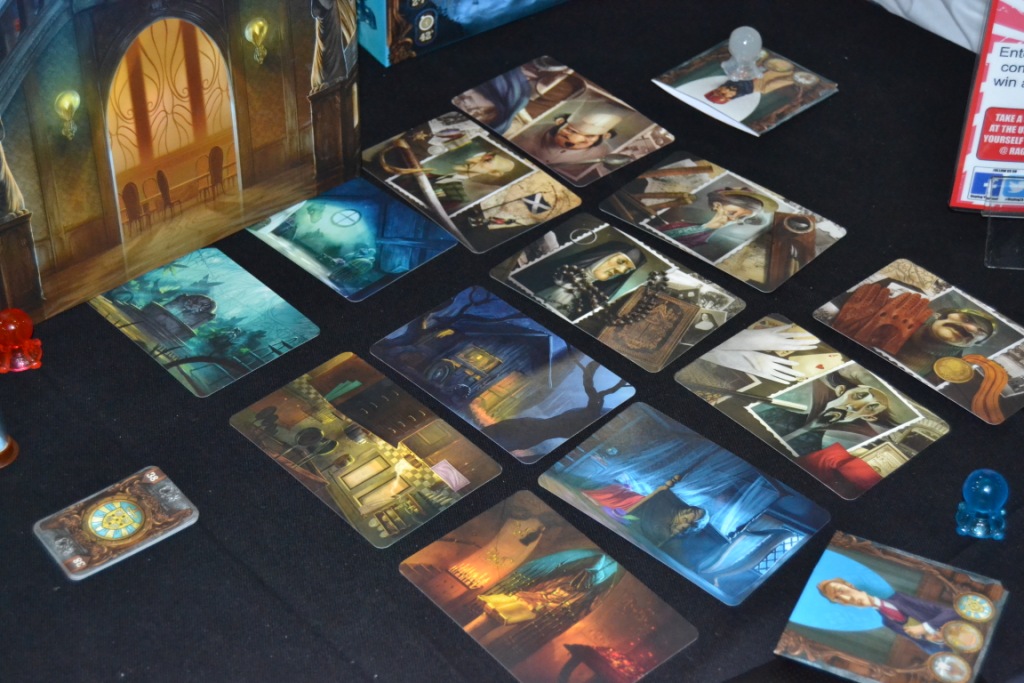 Wasn’t that also a Rihanna song?

Lastly, I was finally able to experience the lunacy of Spyfall first hand. Thought it was available as a demo at rAge, I was lucky enough to play it at a meet-up afterwards, the privacy afforded allowing us to leap into the game without any voyeurs present. I’m really enjoying this current crop of party games that aren’t reliant on slapstick humour – Codenames (which we review here) is one of my favourite games of 2015 – and Spyfall fits the bill well. It’s not quite as intuitive as Codenames to pick up and play, but limiting the game to a timed 8 minutes was a smart move, as this allows the game to be played multiple times within a group. Because Spyfall certainly needs a few plays under the belt before you start to appreciate just how difficult it is to ask the right questions.

It feels inherently unfair to criticise an event that’s first and foremost focused upon videogaming, and I know for a fact that most of the assistants manning demo tables and credit card machines were all volunteers, but there’s always room for improvement – well, room for more tables is probably the biggest issue. It would be amazing to see a future rAge arrange something to similar to the Nag Lan area, even just providing larger tables (Blood Rage tokens were being constantly knocked off the table) would be a step in the right direction. If the interest shown in boardgaming was anything to go by, doubling the tables might still not be sufficient. And that’s exciting.

I’m also aware that geek conventions remain a fairly new experience for most local boardgame distributors, but I’d urge them nevertheless to work on structuring the chaos. One of the counters had a pile of delicious demo games to pick up and play, but I can’t recall seeing anyone trying those games out, so perhaps it could have been made clearer that attendees could do exactly that? Equally, with limited numbers of demo copies for games that will no doubt prove immensely popular, a better managed solution for gaining access to those demos would also go a long way. It was very much a case of lucky timing, or hanging around a table until the current group were finished. Not ideal.

But those are all areas that will absolutely improve, and it was also evident that some distributors had picked up on ideas from the bigger conventions, so that was encouraging to see. The title of this feature is somewhat tongue in cheek – videogaming isn’t, and shouldn’t be, in competition. And for the excellent folks behind the organisation of rAge to welcome our hobby with open arms is something the community should be grateful for. That said, given how dominant our older brother is over the local scene, it was thrilling to see boardgames did not go gentle into that good night.

Captured footage or snapped some photos of rAge you’d like us to feature? Drop us a mail here and we’ll add it to the gallery below. Those of you who attended, which were the games to capture your attention? Surprises? Disappointments? Let us know! 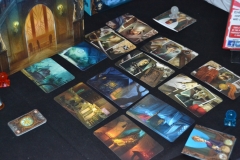 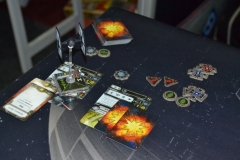 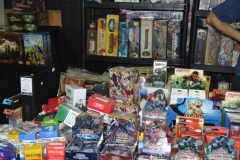 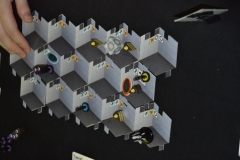 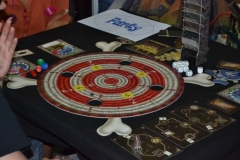 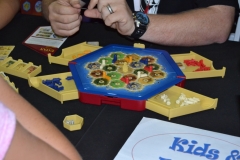 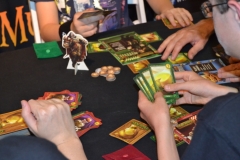 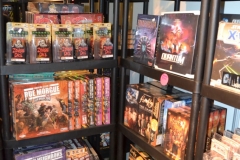 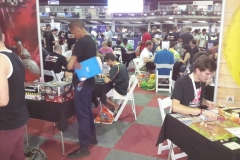 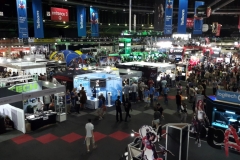 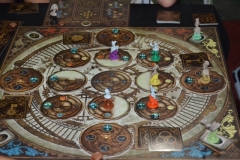 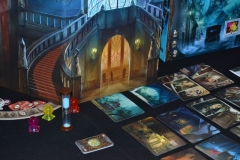 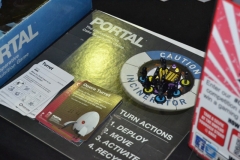