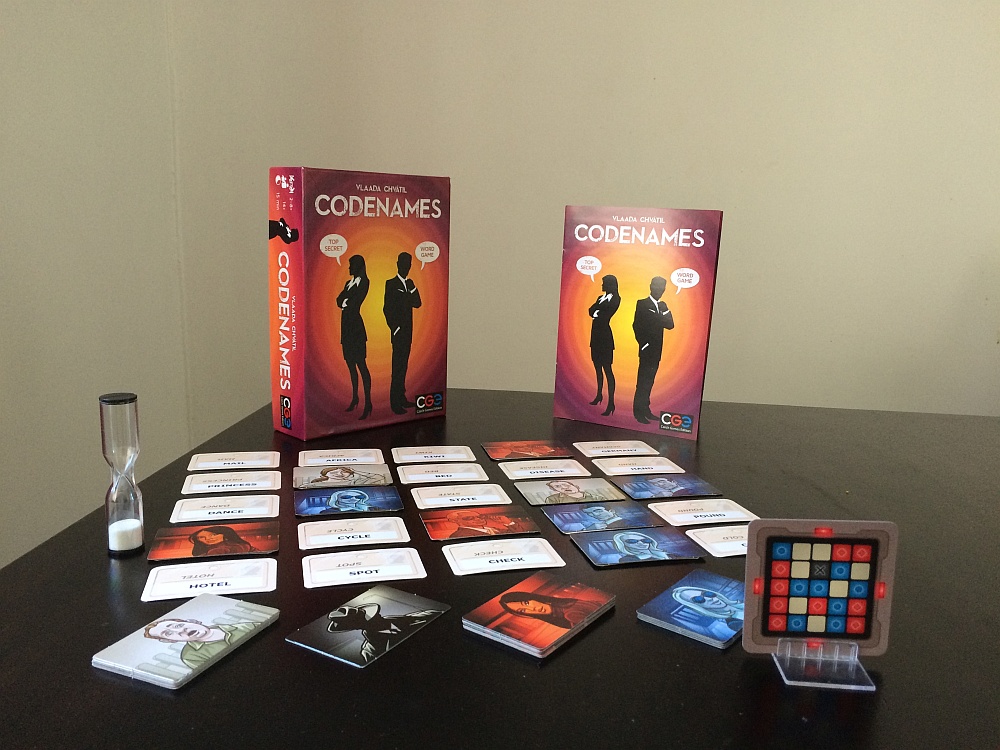 The instructions in the telegram were clear. “X-Wing – 2” Sophie walked through the doorway of the Palais Armani Hotel in Morocco and turned left to enter the bar. Around two dozen people milled around the tables, making light conversation, all apparently there for a military weapons conference. She grabbed a martini from the waiter’s tray and mingled while glancing at name badges. She first discovered “Pilot” at the far end of the room and led her out through the back door to a vehicle waiting to whisk the Agent to the Airfield 3 miles out of town.

When she returned, the party had simmered down a bit and she saw “Force” leaning against the bar. She approached him from the side, confident in her assessment of the second Agent. Sophie made the pre-defined signal of placing a box of matches to the left of her drink and watched “Force” nod and begin to follow her out back.

As she took her second step down the fire escape, she heard the unmistakable mechanism of a pistol being loaded. In her last moments she recalled “Laser” being seated in the rear booth of the Hotel bar. Should’ve gone with “Laser”.

Codenames is a party deduction game from the eccentric, yet brilliant mind of Vlaada Chvátil and Czech Games. Players will split into the red and blue teams, each appointing a single person to act as the Spymaster. On the table you have a 5×5 grid of words, all seemingly unrelated, with Spymasters on one side of the table and their team of Field Operatives on the other. Spymasters will be able to scrutinise the grid for all the identities of the 25 secret agents in the field, given to them in a secret shared key which sits in front of them. The Field Operatives will simply have the view of the code names of people on the table, and the pained and puzzled faces of their Spymasters to look at. 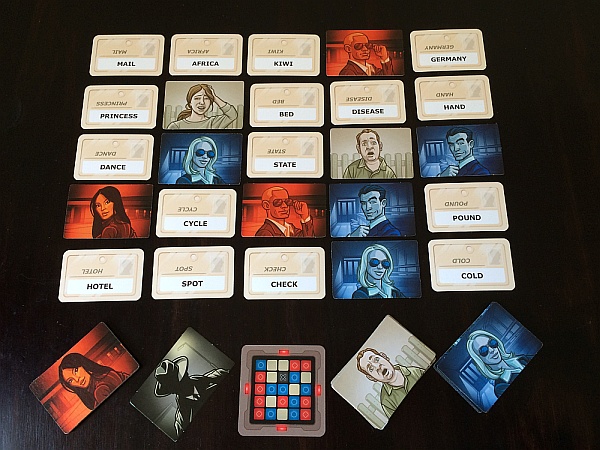 The Field is comprised of Agents, Innocents and an Assassin. Spymasters have to use the “decoder” to send the right messages to Field Operatives

The reason for these expressions? The excruciatingly limited means offered to Spymasters to transmit clues to their Field Operatives. I imagine this in a cold war setting, where various US or Russian Agents have different pieces of a schematic that needs to be put together at headquarters. The Spymasters need to co-ordinate the efforts of their Field Operatives to make contact with their Agents in a limited number of days (turns), with short cryptic clues. These would only make sense to their side to ensure the plans don’t fall into the wrong hands! However each team of Operatives is being closely monitored by their rival nation and hoping that they will lead them to their own agents in error. In every grid of 25, their are Blue Agents, Red Agents, Innocent Bystanders, and a single deadly Assassin.

Each turn, Spymasters are able to give their team of Operatives a single word clue, and indicate how many of their own agents in the grid they believe relate to that particular clue. Beyond this, they are to remain stoic, neither making faces during Operative discussions, nor remarking on anything after contact is made. 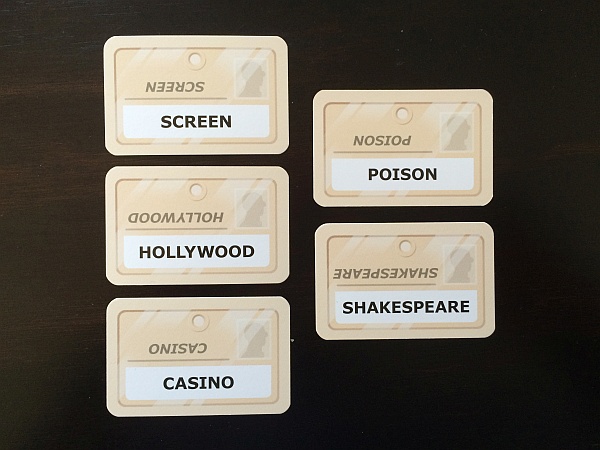 Codenames delivers a word game experience unlike anything I have played before, and with moments that are rewarding to both Spymasters and Field Operatives. Spymasters will fret over how to link together code names in (il)logical ways using a single word that they believe their team will be able to decode. On a deeper macro level, Spymasters will need to be aware of ALL 25 code names on the table, and specifically the 8 or 9 code names of opposing agents as well as the devastating Assassin. This needs to to be factored into the clues they give to NOT give away points to the opposition or end the game prematurely. Operatives will fret over how the Spymaster’s clue relates to the code names in front of them, taking into account a meta game of the Spymasters frame of reference as an individual as well as the panic of picking the hidden Assassin. As the race for discovering Agents escalates, players notice diminishing numbers of code names on the table after a few rounds as cards are covered up, narrowing the options relating to clues. This injects a brilliant catch up mechanic for teams, with clues now possibly easier for Spymasters to convey to their operatives. Compound this with the ability to make contact with one more code name on the table than the number issued in the clue by your Spymaster, and teams can easily come from behind to discover their final agent and emerge victorious! 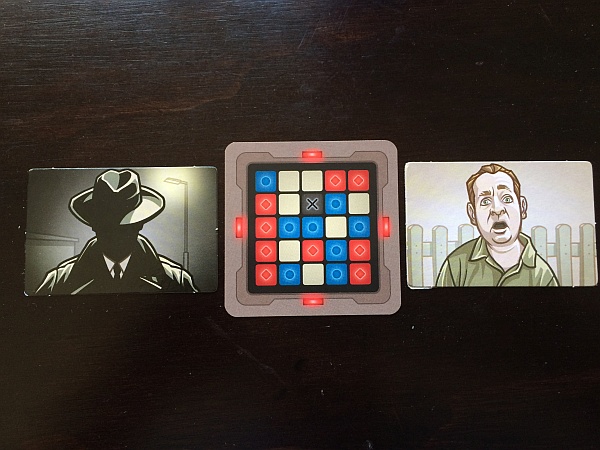 Assassins will bring an early end to your Field Operatives Work and Innocents will simply be confused.

I LOVE CODENAMES. It’s not simply the elegant (often overused but not in this case) mechanics of a seemingly simple word game that has a deep system behind it, something often lost in many party word games. It’s also not just the fact that I can introduce this to almost every person who has played 30 Seconds (aka, almost everybody) and they will grasp the mechanics within minutes and have an amazing time being introduced to new and different board games. It’s also not uniquely the portability, the replay value with a brain bending number of unique combinations, the art that reminds me of Archer and the short time of setup and play. Codenames is one of my favourite games of the year because of the moments it creates.

It’s the discussions between Operatives of whether the Spymaster thinks that “Kiwi” is related to the “Vegetable: 3” clue they have just given because they think the Spymaster is “dumb” enough to actually put those together while the Spymaster must remain sculpture-like. The joy for the Spymaster when the Operatives click with their thought process and can successfully make contact with the desired 4 Agents on a single clue and vice versa, the Agents “nailing it”. The horror of the Spymaster as they realise that they overlooked a card on the table that belongs to the other team, or the sudden sinking sensation as they comprehend the connection of the clue to the Assassin card. Codenames has so many moments packed inside a 15 minute game, and these moments are for ALL players, not simply the Spymasters or the Operatives enjoying the rollrecoaster of success or failure. If I were to nitpick, the game may suffer slight Analysis Paralysis on the side of the Spymasters trying to optimise their choices and possibly players who feel they are not “creative” in giving clues may feel overwhelmed.

I got my copy of Codenames via GenCon thanks to my industrious friends (Shout out to Morne and Les), and it’s come out in almost every gaming session I’ve had since then. At R450, it’s my personal best value game of 2015 (so far) and I’m recommending it without hesitation. Go and buy it now! I want everyone to have the same Amazing, Awful, Brilliant, Bemused, Climactic, Chilling, Delirious, Depressing moments that I have had with Codenames.

Codenames injects a terrific deduction mechanic into a party game about words, a genre that is very popular at gatherings. Cardboard Quest whole heatedly recommends that you at least play, if not own, a copy of it as soon as you possibly can.