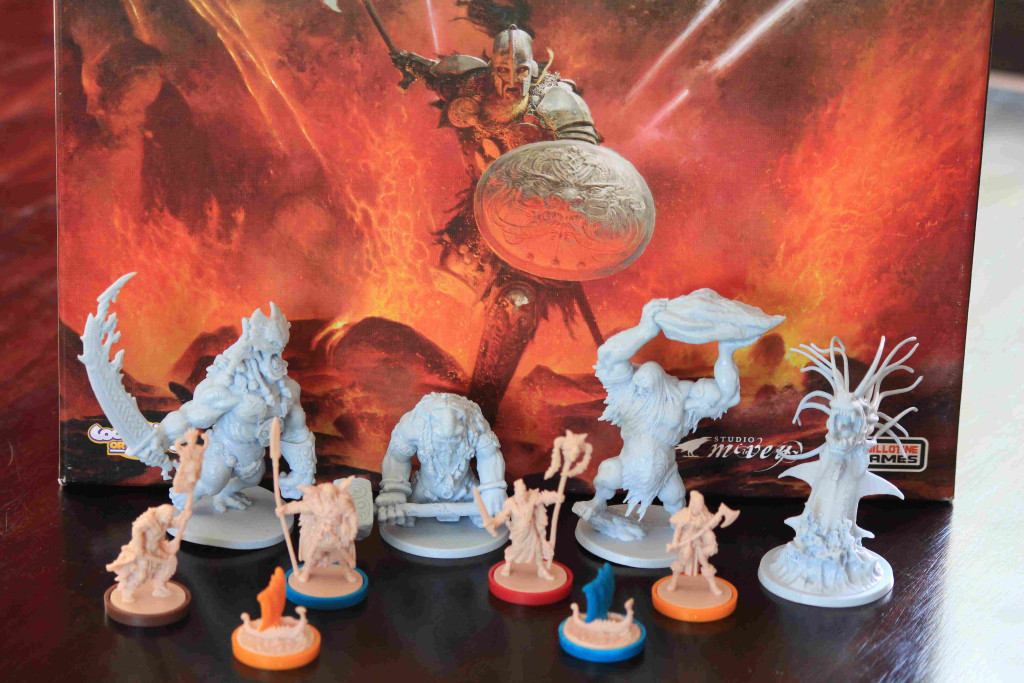 Svanhild felt the world grow cold. A curse, barely formed upon her lips, met the frigid air and dissipated. She wrenched her spear from the neck of a fallen enemy, his contorted features frozen in death, a glorious hymn to Valhalla. The flames of Muspelhiem flickered, as afraid of the coming gloom as any mortal. Fumbulvetr, the Mighty Winter. And with it, a darkening of the skies like the shadow of Fenrir. An eerie quiet descended, and gave Svanhild pause to survey the valley around her. Corpses lay strewn in rivulets of blood, banners of clans Bear and Wolf muddied and broken.

A rustling to her left – Svanhild spun around, eyes locked on a brooding warrior, a shimmering loop of raven feathers tattooed from his shoulder down to the fingers, which held a menacing axe with a vice-like grip. She could hear her blood pumping, thundering in her ears, seconds from driving her forward to end this newcomer’s life. And then, the stars began to fall. The warrior dropped to his knees, as two more stepped from the shadows. The ground shook with the impact of an obliterated sky, the air thick with screams of death and pain. She glanced at the other three figures, their faces wet with tears, mouths agape, arms raised up as if to welcome an infinite joy. Ragnarok had come – black the sun’s beams, the fates of men painted with crimson gore. Svanhild braced herself against the chaos, gasped a lungful of ashen air, and screamed her last words. “Dudes, this game is freakin’ EPIC”

This is a fairly accurate description of what transpired as four of us set aside long-standing friendships to tackle Eric Lang’s much hyped Blood Rage. Around 20 minutes into the first game, after a particularly thrilling throwdown, we all looked at each other knowingly and nodded. Yes, this was going to be brutal, bloody fun. 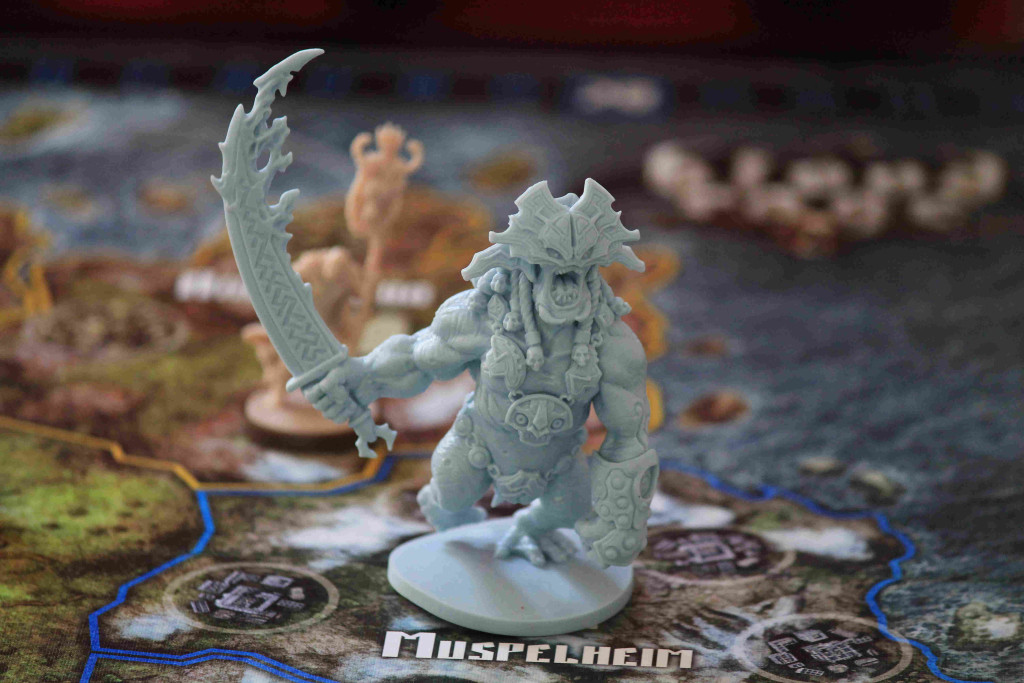 Please allow me to introduce myself…

Blood Rage has remained affixed to the CBQ radar for quite some time, comfortably in the list of both mine and Stuart’s most anticipated games of the year. Neither of us were smart enough to back the Kickstarter, which eventually fell just short of hitting $1,000,000 of its original $50,000 goal, and plenty of wailing and gnashing of teeth has been performed since. So you might imagine, we were more than a little eager when presented with the chance to preview the game hands-on. Chances are if you’re reading this preview, you are up to speed on the basic mechanics of the game. And even if you aren’t, it’s the impressions that matter, so I’ll summarise the rules with as much brevity as I can muster.

Each player chooses from four viking clans, each clan comprising a leader figure and seven warriors. The clans differ only in design, but over the duration of the game will morph until clan powers are somewhat more like the asymmetrical races of Small World. These clans will battle it out on a board representing nine realms of  Asgard, the unifying world tree of Yggdrasil in the centre. Before each of the game’s three rounds, players will draft a hand of six cards from one of three matching decks. Then, each player will perform one action, going around the table as many times as necessary until all players can no longer perform a legal action. This indicates the end of a round, or Age, and play begins once more with the drafting phase. The player with the most victory points at the conclusion of the third Age is declared the winner. 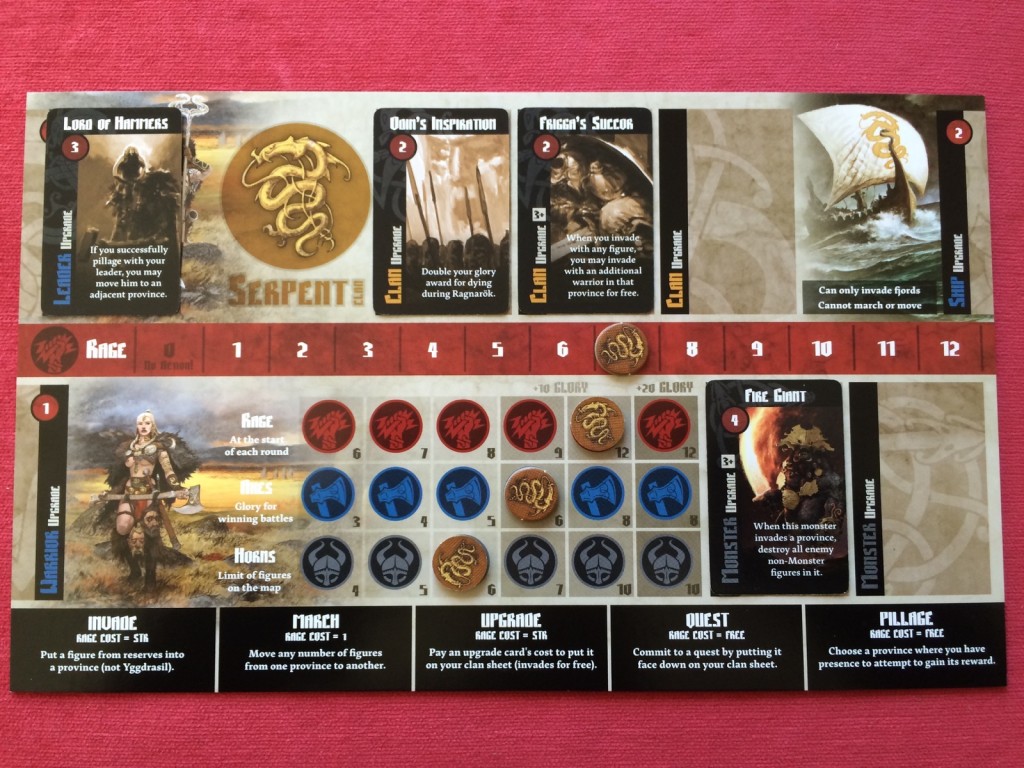 For tonight, we dine in hell…

So, what actions can you take? Almost every action is governed by Rage, a resource you can increase over the course of the game. You can deploy units to the board using the Invade action, you can March units from one space to another, you can Upgrade a slot on your Clan sheet, you can play a Quest card, and lastly you can pillage one of the nine provinces. Aside from Rage, players have access to another two resources: Horns, which govern the limit for the number of units you can have on the board, and Glory which is the number of victory points you earn in successful combat.

These resources all work in conjunction with that hand of drafted cards, which is the bloodied heart and tormented soul of this game. Your leader and warrior figures can all be upgraded by certain cards to increase their strength, or to give them a range of powerful abilities, and they can also be used to summon game-breaking monsters. Your Clan sheet can also hold up to three Clan upgrades, which are essentially favours from the Norse Gods that play into the evolving asymmetric nature of the gameplay. 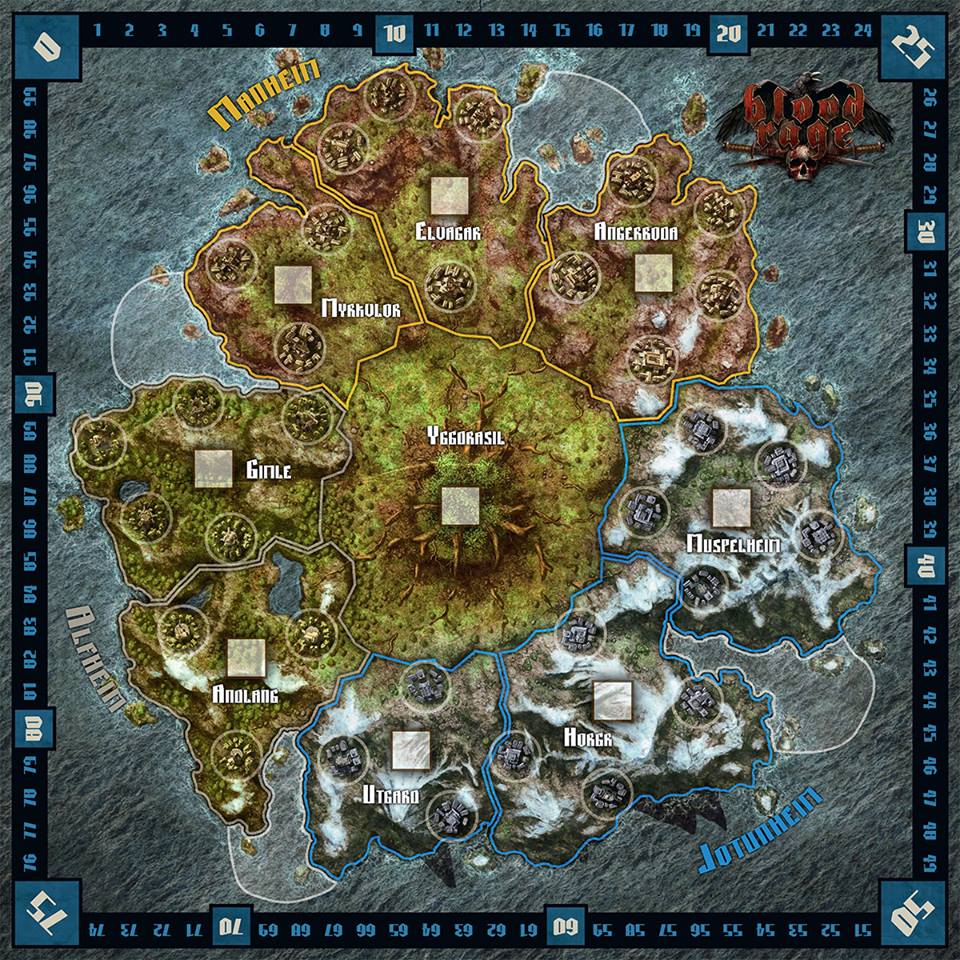 This is NOT Sparta

The Pillaging action is responsible for varying levels of bloodletting. If a player has a presence in a province, and they announce their intention to pillage, each other player will be able to move a unit from an adjacent location, provided the region being pillaged has an open spot (since each province has a limited number of spots that can be occupied at any  time).

Combat takes a leaf from the Cosmic Encounter playbook, as players can augment their total strength in a province by playing a Battle card from their hand. Cards are played face down, and revealed simultaneously. As with Cosmic, certain cards increase strength, whilst others can penalise players with the most strength, or are designed to gleefully steal points by losing the battle. Each unit in a province has a strength value, and the player with the most strength in that region wins the combat. This allows them to successfully pillage, which results in an increase to one of the resources (pillaging Yggdrasil raises each of your resources by one). Defeated units are sent to the Valhalla board, and return at the beginning of the next Age. 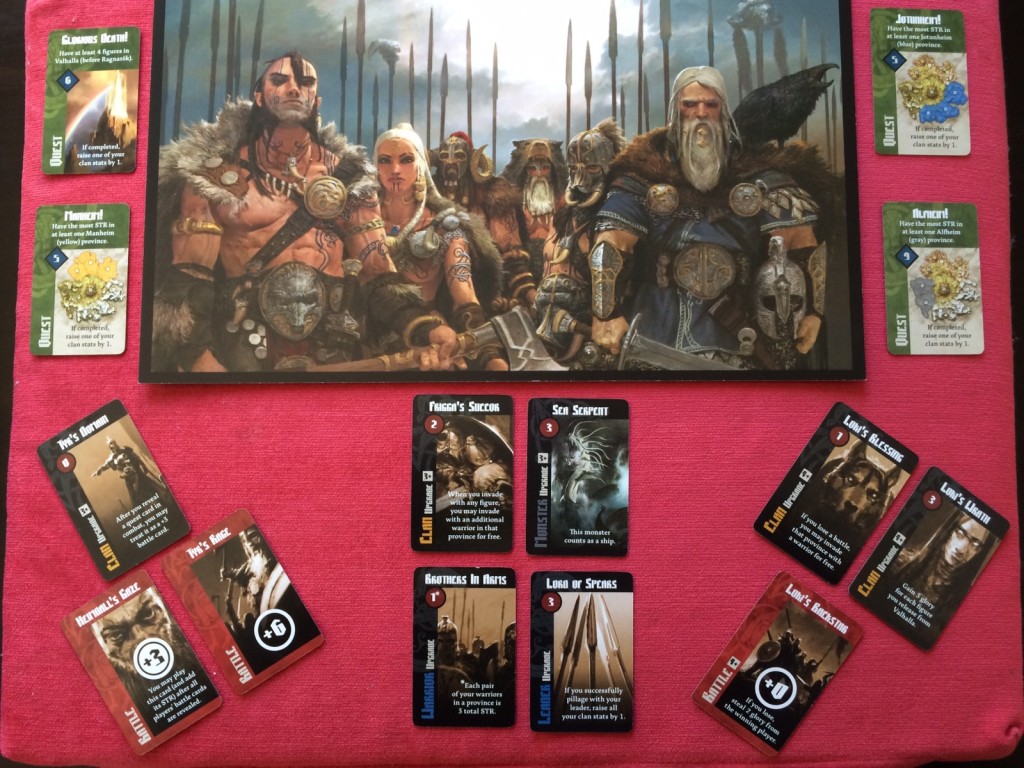 I lost both games of Blood Rage that we managed to pack in to around five hours. Well I was horribly last in the first and 3rd in the second, but who’s counting? No loss is ever particularly satisfying, but being able to scribble down my impressions from a place of defeat is a valuable exercise indeed. Boardgaming is first and foremost a social engagement – unless your goals are cooperative, there will always be a winner, and then everyone else. Certain losses are easier to forget, King of Tokyo for instance is quick and random enough that losing is shrugged off easily enough. But an investment of time and deep strategical thinking for +2 hours is another matter entirely.

Sure, losing is predicated upon personality type, but great games tend to make the scale tip toward a desire to learn from mistakes, improve strategy and try again. Does Blood Rage achieve that? Absolutely. But not without leaving scars. There are no nail biting finishes to be found here, the fog of uncertainty hanging over proceedings until the final scores are tallied. In both games, it was clear toward the end of the Second Age who the winner was going to be. And though it’s entirely possible to attempt to interfere with the leader’s plans when the final drafting round arrives, doing so will likely handicap your own strategy. With four players, two will absolutely endure the final round in the knowledge victory is out of reach. When the winner is crowned, they’ll be doing so on a throne dozens of victory points ahead. 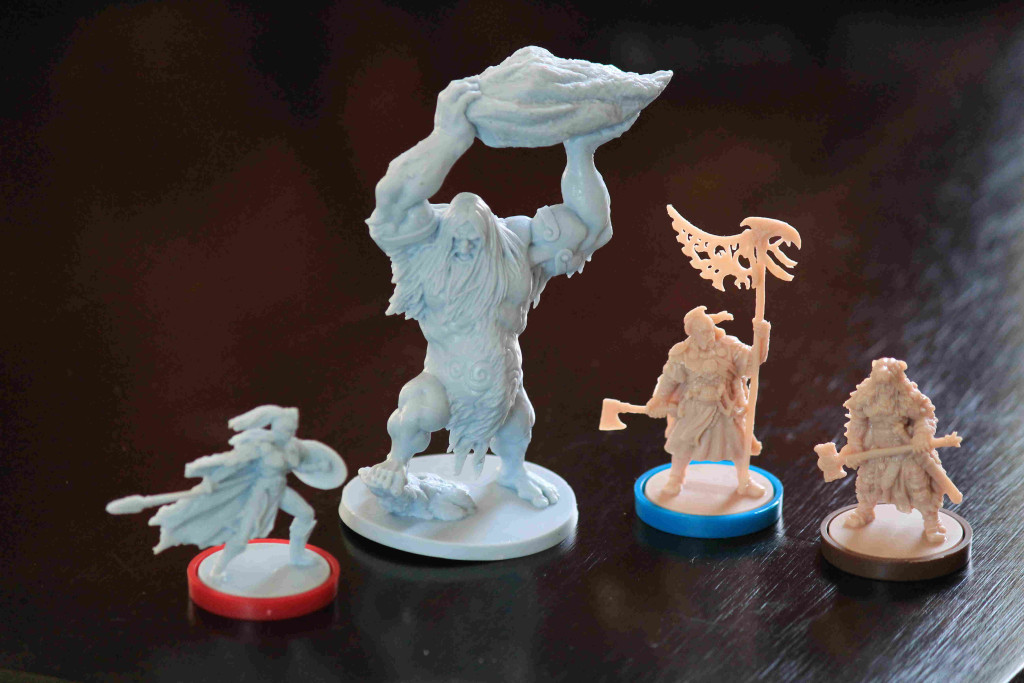 Now this is stoner rock…

But is this a bad thing? Should all games strive for a victory condition that will keep players invested until the last minute? It certainly sounds like a noble goal, and on balance I’d probably agree it’s the better path. But every now and then a game comes along where the manner of victory is intertwined with the theme in such a way that, as bitter as defeat may be, it feels right. And that’s how I feel about Blood Rage. It’s a brutal game, through and through. Brutal in decision-making, brutal in combat, brutal on mistakes made, brutal on newcomers. And I wouldn’t want it any other way. 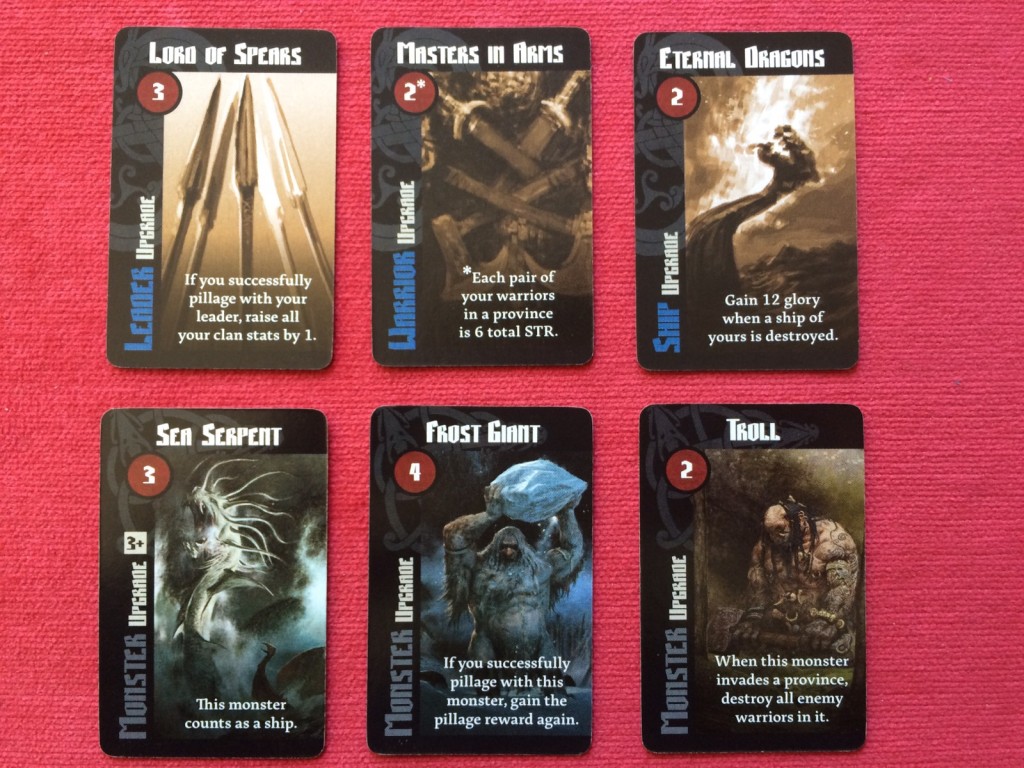 A cleaved head no longer plots

In stark contrast to Paul, I found myself surveying a bloody battlefield from the top of the podium before Ragnarok consumed us all. Over the course of two games, I played with different strategies and I could definitely feel that my knowledge of the rules, and having watched some play-throughs online had given me a distinct upper hand. Blood Rage is cutthroat, more so than any recent game in memory, and poor choices and exploratory strategies against seasoned warlords will find you watching your clansmen die. In this sense, it’s one of the most pure gaming experiences I’ve had in a long time. The game rewards multiple plays, has almost no luck factor past the drafting phase, and offers genuine depth of strategy and alternative counter strategies. Knowing when to throw in the towel during battle, forcing someone to lose a powerful battle card (only the victor discards, while losing players retain theirs). Drafting to prevent players hording powerful combinations. Maneuvering your armies around the board to get Glory from quests. These are all tactical arrows in your quiver of options, elements that require constant monitoring.

While there is an impression of the “point salad” scoring system while playing, Blood Rage rewards players for concentrating on a strategy and evolving it through the ages. Do too little, and you’ll find yourself being bullied by the largest Viking at the table. It’s a game that is driven and changed by each player at the table, and everything you choose to pursue, needs to have the aims, desires and strategies of all clans taken into account for you to emerge victorious. 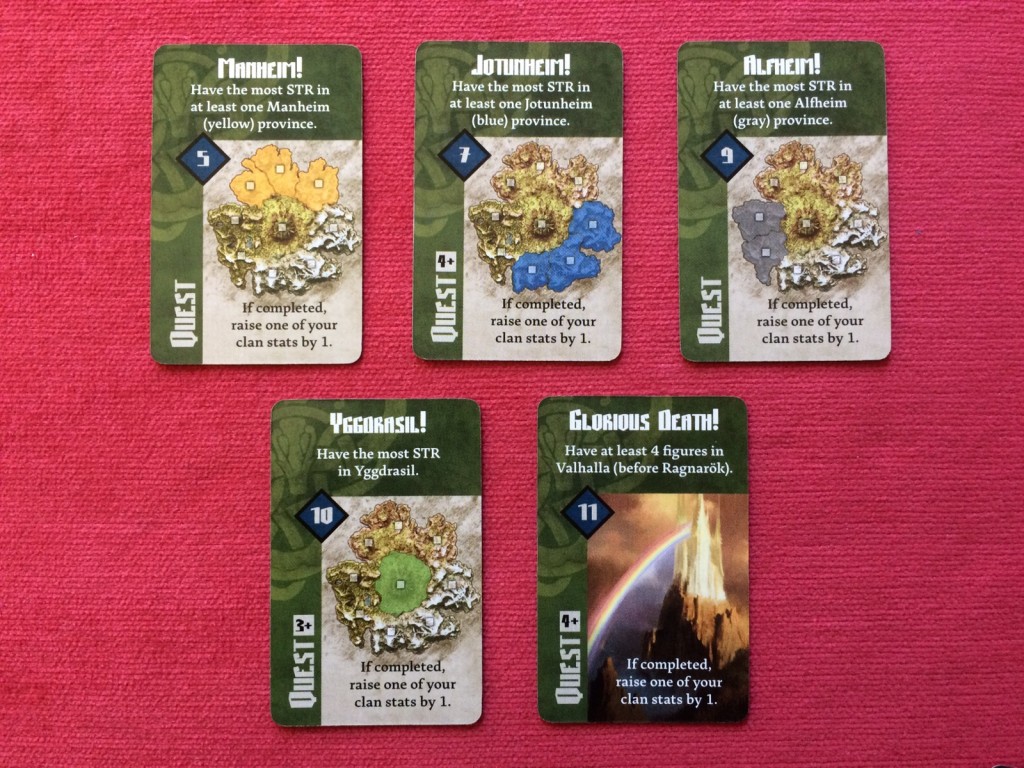 Now, if you’ll excuse me, I have to destroy Jotunheim

Blood Rage does come with a massive caveat from me though. While the theme is about ruthless vikings showing no mercy for others in the quest for glory in the final days, the metagame at the table is very similar. Your “friends” will (and should) not show any mercy in foiling your plans or destroying your armies. When you are lying bloody on the the edge of the cliffs, there is no mechanism to raise your army from the dead, no glowing hand reaching from the heavens to light a new path. If you, or your group cannot appreciate “in your face” style games with no quarter given, or will only play this once a year, Blood Rage may not be a must-have title for you.

Whether I’m giving my impressions of Blood Rage through a helmet soaked with the blood of my enemies, or because I just may have found one of my favourite group conflict games, only time will tell. Right now, I can say that gamers who love their strategy and tactical nous balanced on an axe’s edge must play this game. It’s certainly not for all, but those who embrace its steel will find glory in Valhalla. Witness Me!!