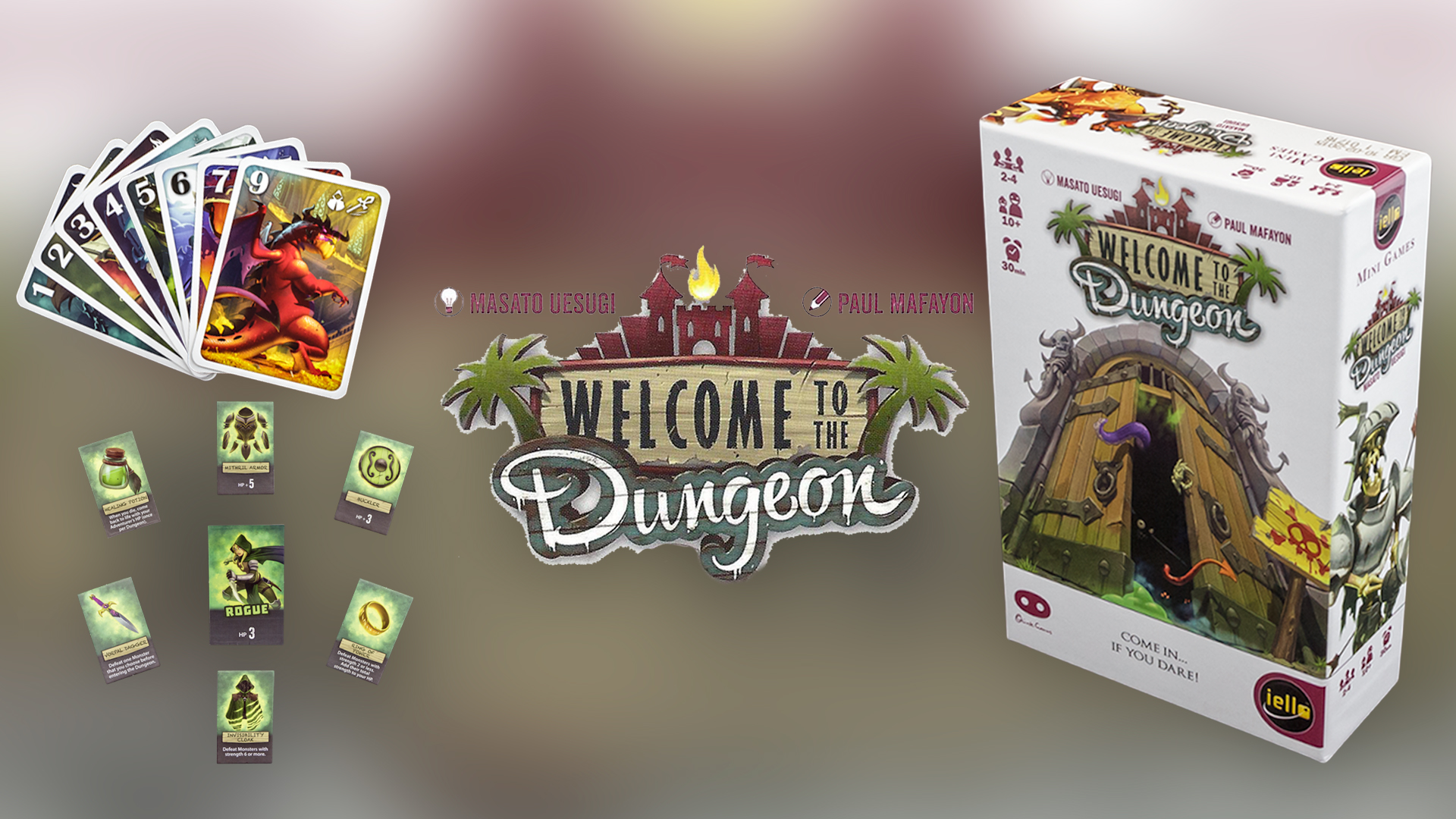 What is it? Want a quick and dirty dungeon delve where he who hesitates is lost? Think you're the bravest warrior that ever lived? Many have watched others set the challenge and triumphed over insurmountable odds. Yet, many more have been devoured beyond the dungeon entrance. Who among you wishes to use their insight to wager it all for the sake of glory? You're all Welcome to the Dungeon, but you can't all leave...

Huddled around the campfire, the four “heroes” exchanged tales of bravado while true evil and peril lurked mere minutes away beyond the cavernous opening of Plyccan Dungeon. Whilst all boasted interactions with maidens in “peril” and rescued many farmers livestock from wandering too far from the paddocks, their true tests would ambush them through a lapse of a daring tongue, and the fear of shame just one week before the county’s “Knight: A Squire’s Road to Fame” auditions to be held in Hillbottom Square. Such a lapse happened to dear Reginald:

Edelina the Insane: “I could pass through this dungeon with nary a hair lost from my head! Why, I wouldn’t need the Dragon Lance nor the Mythril Armour”

Reginald the Righteous: “Milady, you insult us all with your feeble challenge, surely you think that not a warriors tale worthy of regale? I will commit to banishing all foes without the Dragon Lance, Mythril Hammer, NOR even a torch to light the ways through Plyccan!”

Heymon the Timid: “Go forth Reginald, you are more worthy than I….[the last compliment he heard]”

Merild the Shield: “You Sir are a True Champion [dibs on his piece of the roast]”

Edelina: Well show us how its done, Reginald! [I wonder how his helmet will look on my mantle?]

Reginald ventured into the Dungeon, brandishing his tighty-whities, a helmet and a rusty blade. In just a few minutes the others heard the screaming cease.. and began their tales anew.

Welcome to the Dungeon, from Iello, is a 2-4 player micro game where you challenge each other to a glorious game of “chicken” with limited information and generally more bravado than brains. Aiming to be able to best the beasties that players load inside the Dungeon and come out again intact, players must decide when the peril is too perilous and force another player to his doom or simply hold out to be the last hero in the running for the gauntlet. 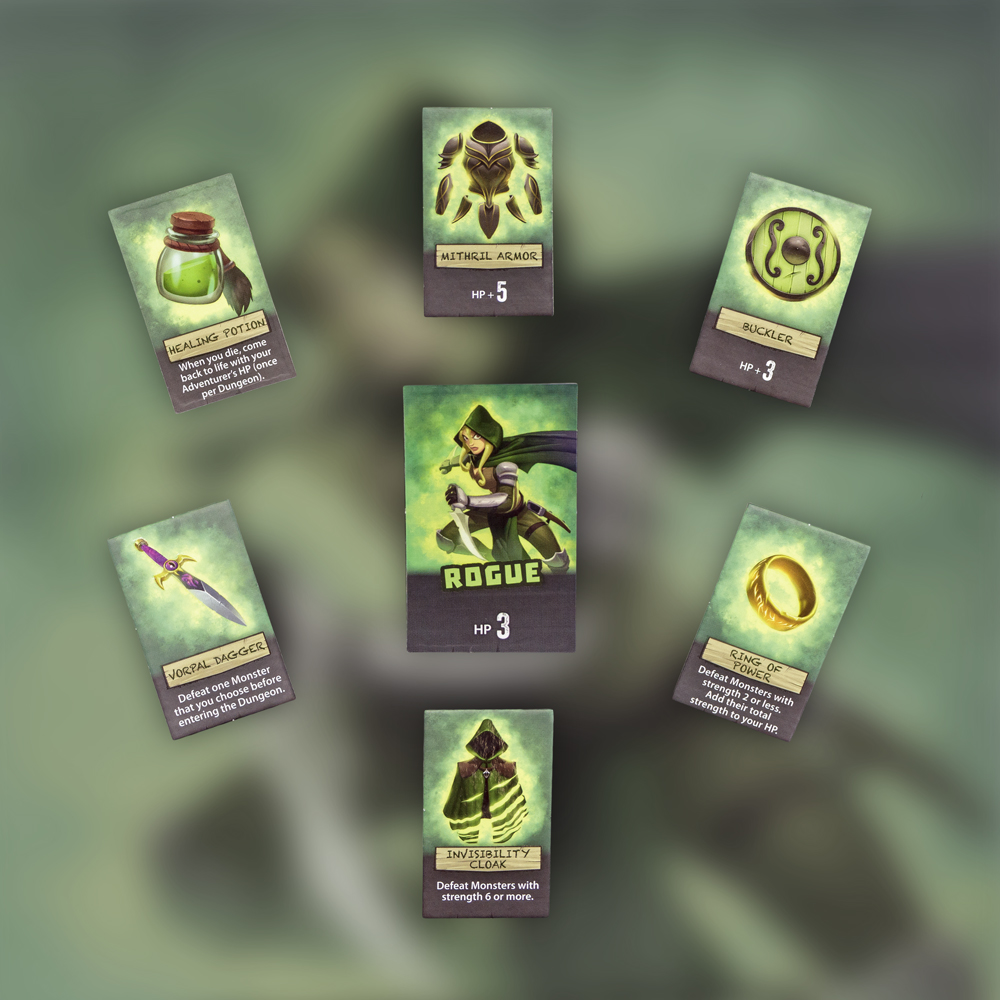 At the beginning of each round a fantasy hero archetype, fully equipped with 6 items to protect them or give them benefits in the dungeon, will be placed in the centre as the shared adventurer for the group. Each archetype differs slightly with items that grant them abilities but all equally capable of dispensing with the dangers in the dark, as long as they go in fully equipped. For example, a Barbarian may carry great hammers to destroy Golems, Rogues have invisibility cloaks that keep them hidden from Dragons and Demons, Wizards can polymorph one enemy to take the form of another and Warriors carry a great Dragon Lance to defeat any Drakes that may cross their path.

To the one side of the hero, we have the shuffled monster deck of 13 cards, ranging from single strength Goblins up to a ferocious 9 strength Red Dragon lying in wait. On their turn, players will choose to either draw from the monster deck or refrain from going any further and simply pass on their turn. When drawing from the deck, players will look at the fearsome foe in their hands, and choose whether to add the creature to the growing dungeon, or discard the creature from the deck. However discarding comes at a price and the player must discard one of the valuable items from the center hero and by doing so making the dungeon delve more difficult for each player at the table. This continues until all players pass from the last person who played, and the player who drew the last card must venture into the dungeon to defeat the horrors stored by other players, and themselves. 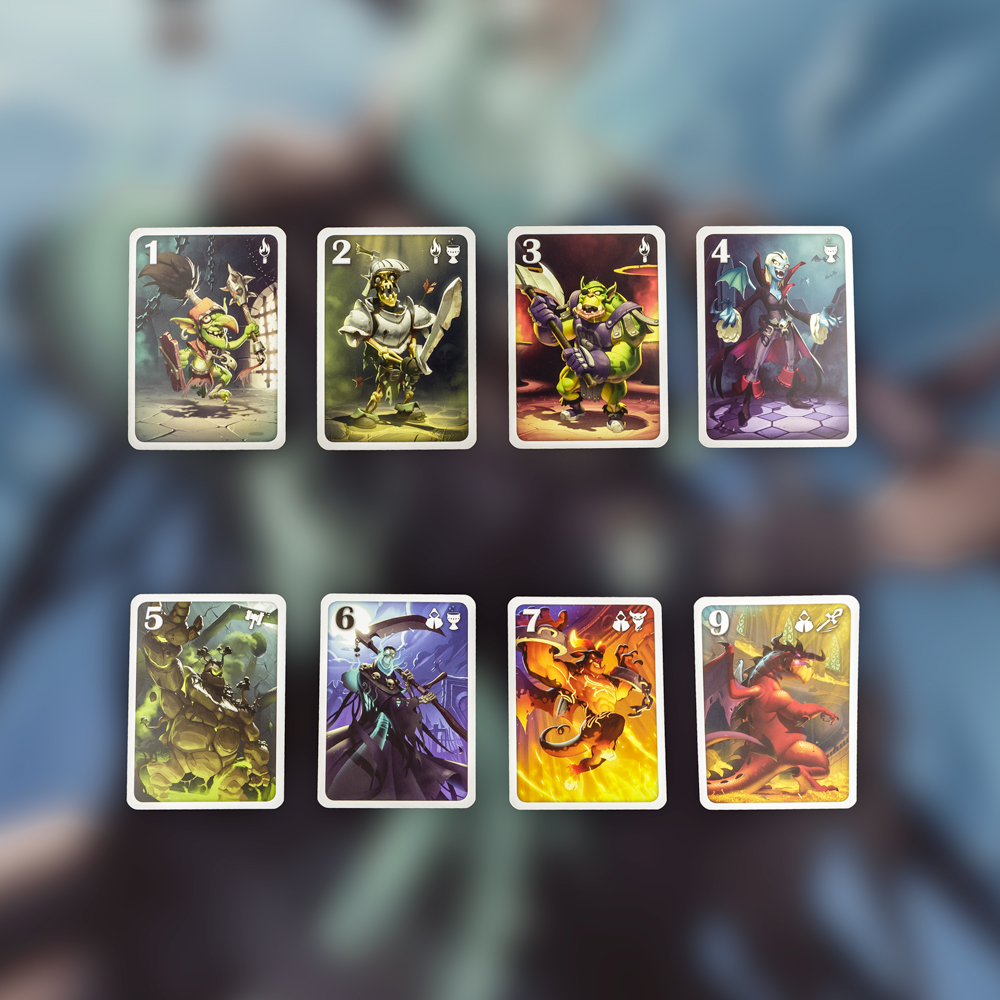 When beginning their dungeon crawl, players should add their starting health and all their equipment defense bonuses together. Then, in order, the cards from the built Dungeon deck are revealed for the hero to face. Some equipment may nullify certain creatures, allowing the player to ignore the monster cards. For example the Dragon Lance allows players to ignore any Dragons in the Dungeon and the Holy Grail ignores damage from any monsters with an even number strength. All monsters that cannot be countered by the remaining equipment of the hero, causes the player to lose health points equal to the strength of the monster. Should the hero deplete all of their health they are defeated, however should they manage to navigate the terrifying depths of the Dungeon they will receive a Scroll of Success! The first player to score two scrolls will win the game and those who fail to defeat the dungeon on two occasions are eliminated, with last man standing rules also in effect.

Welcome to the Dungeon tests a player’s insights of risk with limited information and while the simple rules allow players to become easily acquainted with the elements, there is some depth to it. Players may dupe each other by removing “critical” pieces of equipment to get them to pass prematurely and allow them to sally forth to glory or identify crucial information that confirms their suspicions of impending doom and allows them to defy certain death. It creates a fantastic virtual campfire at any table that encourages player interaction to goad others to their death. The beauty is that you will never have all the critical information, just varying degrees of certainty, with card counting and observation a crucial element of success. Passing too early will never get you a chance at glory, however many a boastful hero will will see their end when jeering in the face of demons! While I’m usually not a fan of player elimination, the short game time ensures that this is never for long periods. 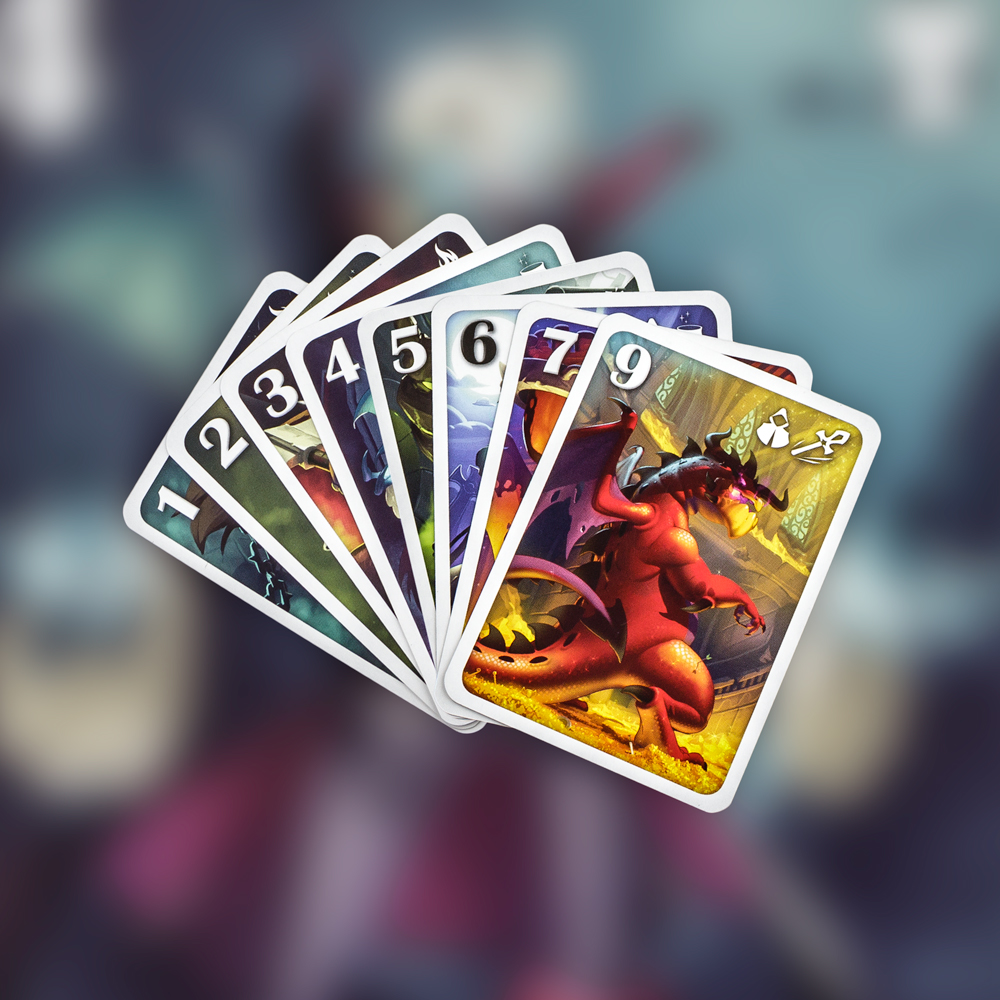 While micro games are on the cheaper end of the board gaming catalogue when it comes to contents, Welcome to the Dungeon showcases fantastic quality components with solid cardboard and card stock housed in a travel friendly package. The art deserves the praise of many a minstrel with beautiful and vibrant colours and characterisations of fantasy creatures that will appeal to every demographic. While lessor creatures seem ever so whimsical, the higher level creatures appear fearsome with a few knee shaking baddies in the middle. It’s a game that will catch the eye of anyone who sees it hit the table, and the subtle nuances of the imagery are noticed after many plays still.

At a recommended retail price of R250, and a few bargains where you can snatch it up at slightly under that, Welcome to the Dungeon is a filler that I can recommend without reservation. The replay value of the game is seen both in the diversity of the 4 heroes supplied with the game, as well as the playing styles showcasing the better (or worse) judgements of different players at the table. Beautiful Art, a great filler that can be played in as little as 15 mins with interesting choices and gameplay makes Welcome to the Dungeon a solid buy from us at CardBoard Quest!

Childhood dares and games of "chicken" are brought to life in this fantastic filler from Iello. With beautiful art from Paul Mafayon and just enough variation to keep it coming back to the table, this micro game will make you fret over the small stuff and simple choices. That is: small stuff being Hell Spawn or Golems and simple choices being Life or Death.