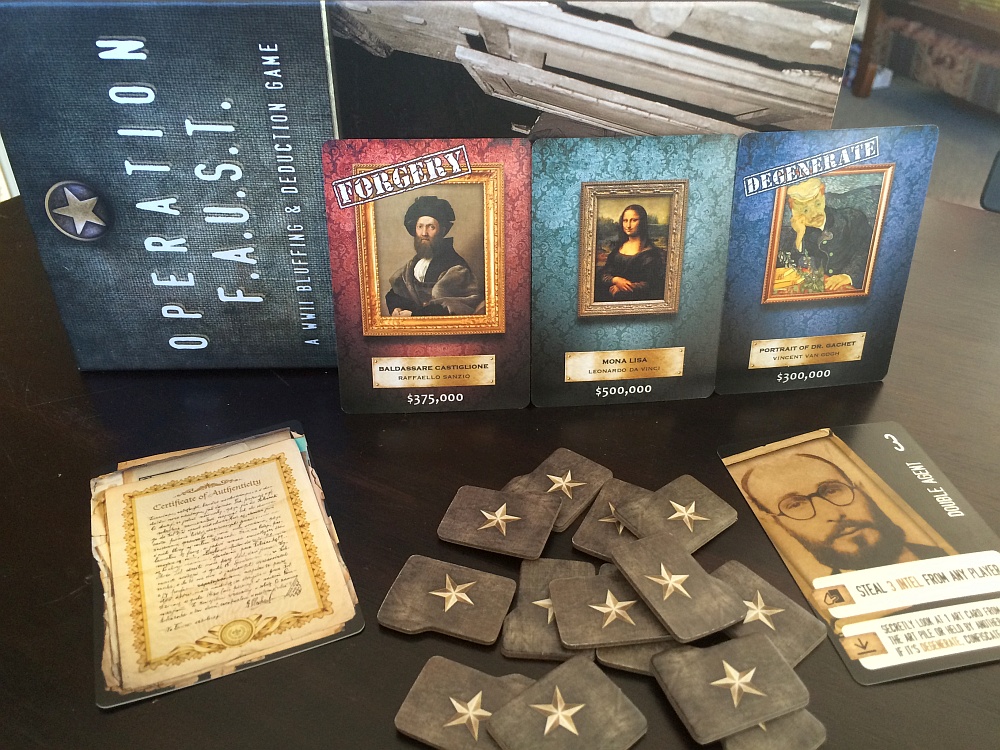 What is it? "Rescuing" art in an era of history filled with betrayal requires you to have the right people for the job. You'll need intel on where masterpieces are located, ranking officers to intimidate other "curators" to handing over art that clearly should not be in their possession and double agents to keep them in check. The real question is, does Operation FAUST complete the mission of being the social deduction masterpiece to be placed on the mantle above Coup, Werewolf and others that have painted the scene before it, or is it simply a forgery?

Board game psychology is something that fascinates me every time I open a cardboard box at the table with friends and families. The most successful players are usually those that can adapt to new situations sooner than others, exploiting others weaknesses or by identifying the most rewarding paths to victory earlier than the rest of the group. All players start with an equal chance of victory and it’s the social aspect of understanding who you are playing with, how they play and what you need to exploit and rely on to have a shot at the title. In recent years, deception has become a popular element in party games, with players needing to “bluff” (lie) in regards to hidden roles. Convince people you’re a villager and that someone else must be the mangy werewolf. Sidetrack the accusations that you’re a spy and talk your way onto missions. Coup emerged as a new wave, allowing players to deceive others to make use of role card powers they may not have to emerge victorious. All these party games have a minor detraction in common; player elimination.

What if I told you that there was game that encouraged bluffing, amidst a range of extended players actions that allowed all players to be involved until the final play?

Operation F.A.U.S.T. (Fine Art Underground: Stolen Treasures) is a bluffing and social deduction game for 3-8 players, kickstarted by Grey Fox Games and designed by Robert Burke. Players are looking to utilise various army roles to acquire the Intel for them to discover and claim $1,000,000 of fine art that has gone underground during the era of dominance by the Third Reich. Each player begins with two hidden recruit role cards and 5 pieces of Intel (the game’s currency), and in the centre of the table you’ll find a hidden art cache of 4 cards face down next to the art cache draw pile, a stack of certificates of “authenticity” and a recruitment deck.

Each turn players are able to recruit by spending 4 Intel to add an additional role card into their hand, carry out on of the actions of the various role cards, purchase a work of art by spending 10 Intel to claim the top piece of art from the draw deck or one of the four face down on the table, and lastly discard 3 Intel to request a certificate of “authenticity”. 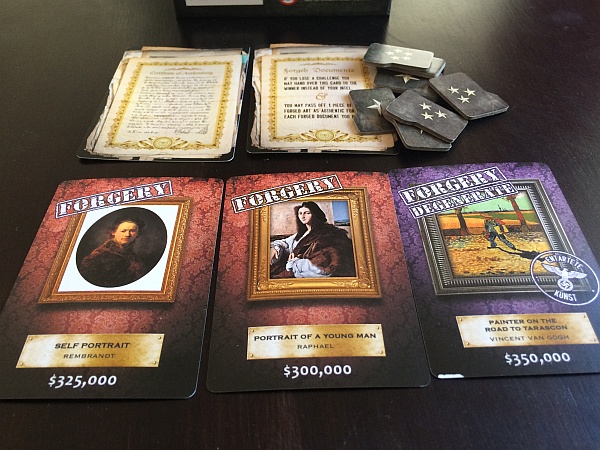 Getting the right people to claim your art is authentic makes all the difference to your wealth.

This is because not all art you’ll discover is equal. Littered among the pristine original Mona Lisa’s and Soap Bubbles of the museum world, you’ll also find Degenerate Art (Modern art labelled as being inferior in moral fibre to the classics) as well as the works of opportunistic artisans who have created forgeries of the great pieces. While you’d expect the pristine art to be pieces to get you closest to the finish line of $1,000,000 of art, you’d be solely mistaken in many cases with some degenerate paintings and forgeries being assessed as having higher monetary values. However, Forgeries require a certification of authenticity and both they as well as degenerates can be claimed through the use of role cards by opponents.

Through the strategic use of roles and their interactions, Operation Faust sets itself apart from the other bluffing games that have come before it. The ability to buffer your hands recruiting additional roles creates more uncertainty between players as to what action options they truly have. “Couple” this with each recruit role having dual actions, an in-hand and discard ability, and each player should have a wealth of options with simply a few cards. But do they really, or are they counting on you assuming that they do? Do you allow the other player to call his spy ability to look at 2 cards in the art cache, knowing that they have enough Intel to purchase next turn? Do you allow them claiming to send in the double agent to steal 3 Intel from you, or at worst claim the discard ability of the Allies to search through all of your hidden art and claim a Degenerate piece of art from you should you have one? Eventually you’ll smell a rat or simply get frustrated with enemy officers bullying your people and call someone’s bluff. With every challenge there is a winner and a loser… 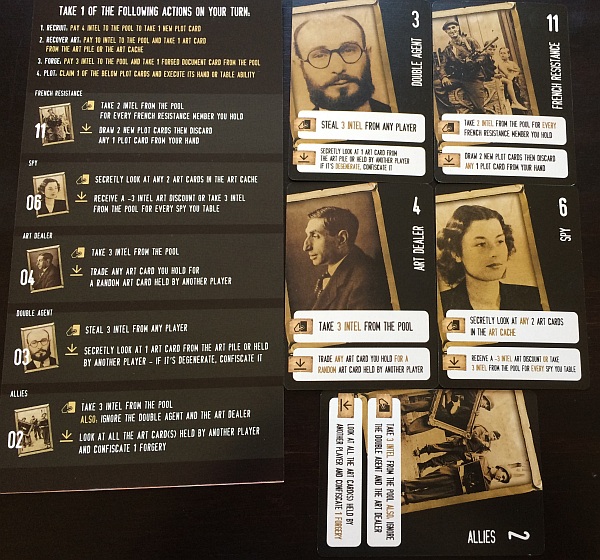 “I’m not upset that you lied to me, I’m upset that from now on I can’t believe you.” – Nietzsche

Accusing people in bluffing games usually works similarly to the Salem Witch Trials. Either the accused goes straight down to the bottom of the lake with weights, or there is one call to strike the match and the second to set flame to the pyre. In some cases people who accuse incorrectly of heresy find themselves replaced on the pyre to sate the crowds bloodlust or simply receive a shrug from the town magistrate and told to go along with their business. In Faust, there is fairness and appropriate retribution for those being found guilty as well as those crying wolf and disrupting decorated officers attempting to carry out their legal duties. The winner of the challenge, receives half the Intel of the losing player, be they the accuser or accused. Should the officer carrying out his action be accused, and prove his role to be true, then he may carry out his duties, as well as claiming his additional income, and then replacing the used role card with a new recruit. Should they be found wanting, the action is rebuffed the and the penalty for impersonating an officer is imposed. Accusations are not limited to the involved parties as deception, impersonating officers and insubordination is the responsibility of all parties.

Robert Burke has managed to create a game flow that allows players to improve their strategies as they play, adapt to other players achievements and most importantly always feel like they have a chance to catch up in the recovery of valuable art. If you’re low on intel it’s never been a better time to call out players with more income or those using powerful actions as they are forced to reveal or discard the role if you’re wrong for a minimal cost or simply hand over a wealth of intel. Just short of $50,000 of art to win and seeing an opponent about to claim what’s likely to be winning art? Then you simply play the Art Dealer, Allies or Double Agent cards to switch your cheaper artwork for the hopes of finding theirs more valuable or pillage to find forgeries or degenerate pieces from their collection. 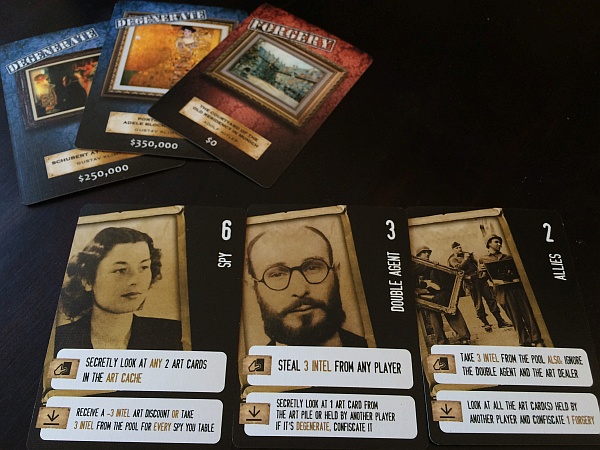 The beauty of Operation FAUST is that it offers a basic strategy game that uses bluffing and deception as an additional mechanism. There are numerous ways to win without lying, and bluffing is an enhancer to keep your opponents guessing and give you that clutch play when you need it. Much like Sheriff of Nottingham, you don’t have to bluff to win the game, and reckless tales will cost you little setbacks constantly, but not cripple your enjoyment. Its a game where you’re constantly working angles to create opportunities to catch others in deception to boost intel, listening intently to what people are claiming to play, hoping they will be caught in a web of deceit or simply trying to establish what powerful you could safely claim to have that aren’t in your ranks. Bluffs can be made with the purchasing of authenticity documents without holding forgeries, certain roles stack benefits due to the number of them in your hand and sometimes you just want to try a Hail Mary to watch the world burn. Art pieces will change hands, change positions in the central cache, alliances will be made (and broken) around the table and when someone turns up with $1,000,000 in art and claims victory you’ll always feel you “had a shot”.

Operation FAUST allows me to introduce lying games to new players without punishing them for lacking that skill with the severity that Coup, Werewolf, The Resistance and other social deduction games do. It allows a group to fluidly adapt to lies, cards in hand, art in caches and other “red herrings” or “truths” that players bring to the game night. The theme is a renaissance to the norm of board games, with brush strokes of historical relevancy, role cards that make thematic sense (I’m looking at you Captain that Steals) and beautiful artwork on the cards from the true masters of the canvas. 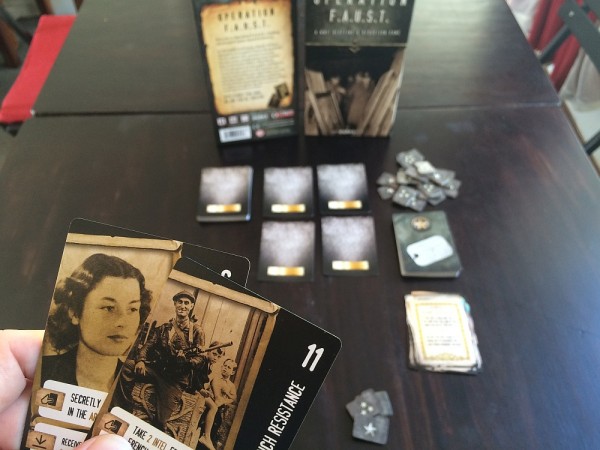 In closing, I’ve served my time on the front lines with a few tours in werewolf county, 3 stints fighting to free resistance fighters from oppression as well as that time when I tried to take control of a futuristic government and I thought I’d hung up my boots and holstered my sidearm. When the commander called me up for FAUST, I thought of my gaming group and all they’d been through before and yet still I signed up, knowing that this was for their future. There is not a gaming session in the last 2 months where I regret that choice and knowing that I made their table a safer place to lie.

I've not been a fan of bluffing games. I've always found there to be too much riding on one element, my ability to trick others and the anxiety and emotional aspect of the game would often sink it for me. Operation FAUST is hands down my favourite of the genre as the bluffing is NOT crucial to the game with other strategic options and is NOT punishing me severly for testing out my bluffing abilities with friends. With a unique theme that I adore I cannot recommend Operation FAUST for gamers who've struggled with elimination and the pressures of pure bluffing games or simply for those that enjoy the genre but have always wanted a little more game. We just need to get it into local stores.