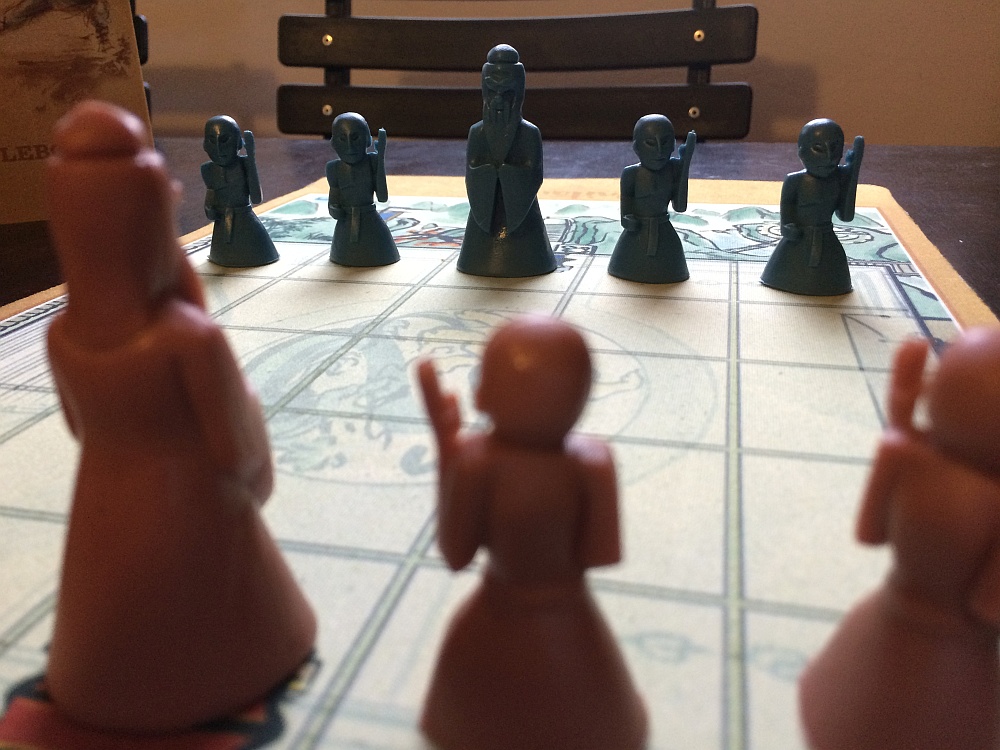 What is it? To oversimplify, Onitama feels a little like karmic chess with an ebb and flow of strategic options between two players in this Japanese abstract title. Each game consisting of 5 simple movement options and dual winning scenarios aims to create a short but masterful fencing match of attack and defense where one failed movement could end the game in victory or defeat. Does Onitama bring something new to the abstract market, or is it simply a tired Chess or Tic-Tac-Toe variant?

My name is Stuart and I enjoy chess. About 20 years ago, that phrase uttered by any high school lad would have reduced the number of invitations inside my locker to weekend parties and yet didn’t deter me from spending afternoons in the school library competing against peers for intellectual superiority. Chess, despite its massively popularity with players around the world, does not feel like a game played for “the fun of it”. Chess is mentally brutal with victories and losses attributed to a strategically superior intellect or a failed understanding or careless assumption. It’s associated with smart players and intellectuals who battle with the constraints of time and silence to win. If Mensa were to support a bloodthirsty gladiatorial competitive sport, it would be chess. Last year I heard about a small Japanese game which revived all these feelings I used to have under the fluorescent glow, and when I learnt of the reprint in the Dice Tower Essential line I placed a pre-order immediately. 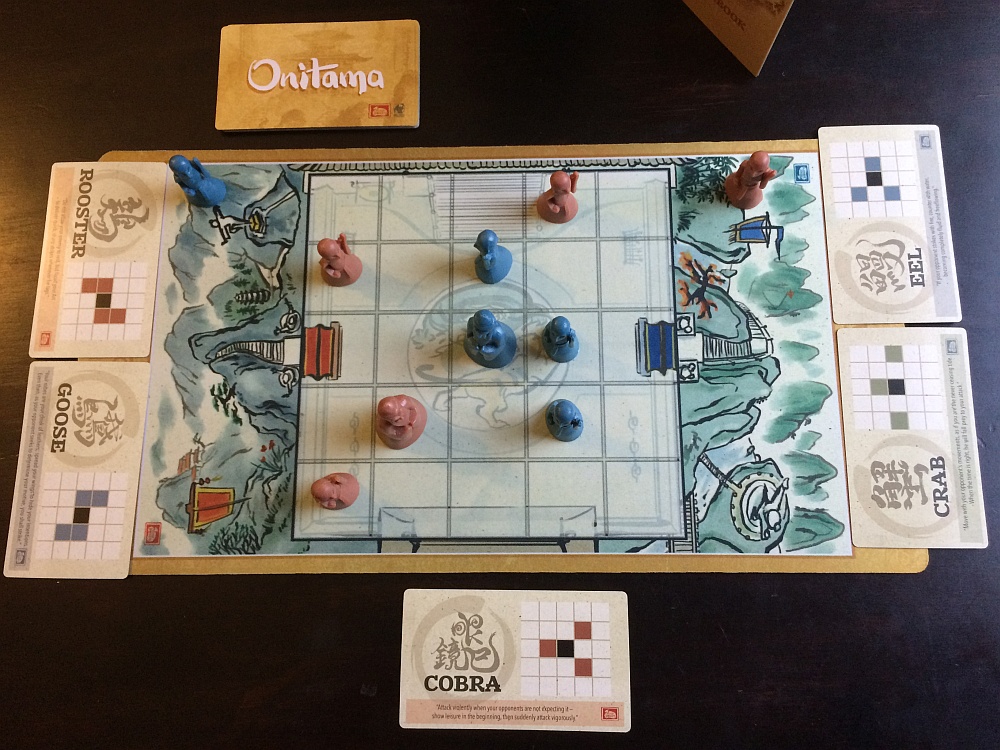 Onitama, published by Arcane Wonders as the second title in the “Dice Tower Essentials” line, is a head to head abstract game with elements of hand management and open information strategy. Each player represents a monk school with a master and four disciples battling to show their superior martial arts movements, attempting to capture the opponents master or by having their master out wit and outmaneuver the opponent by reaching the other side of the board. Capturing pieces in Onitama is done by moving one of your pawns onto an opponents space, however unlike many other abstract games developed in similar styles, the moves available are not dictated by the type of piece, but rather by the unique shared movements cards in each game of Onitama.

At the start of the game, each player places their 5 pieces along the back of the 5×5 grid board having a Master in the center flanked by two pawns on either side. 5 random movement cards from the box are then dealt out for that particular game, two to each player and the last in between them on the side of the board. The colour shown in the bottom right symbol on the shared card in the middle denotes which player will get to move first. 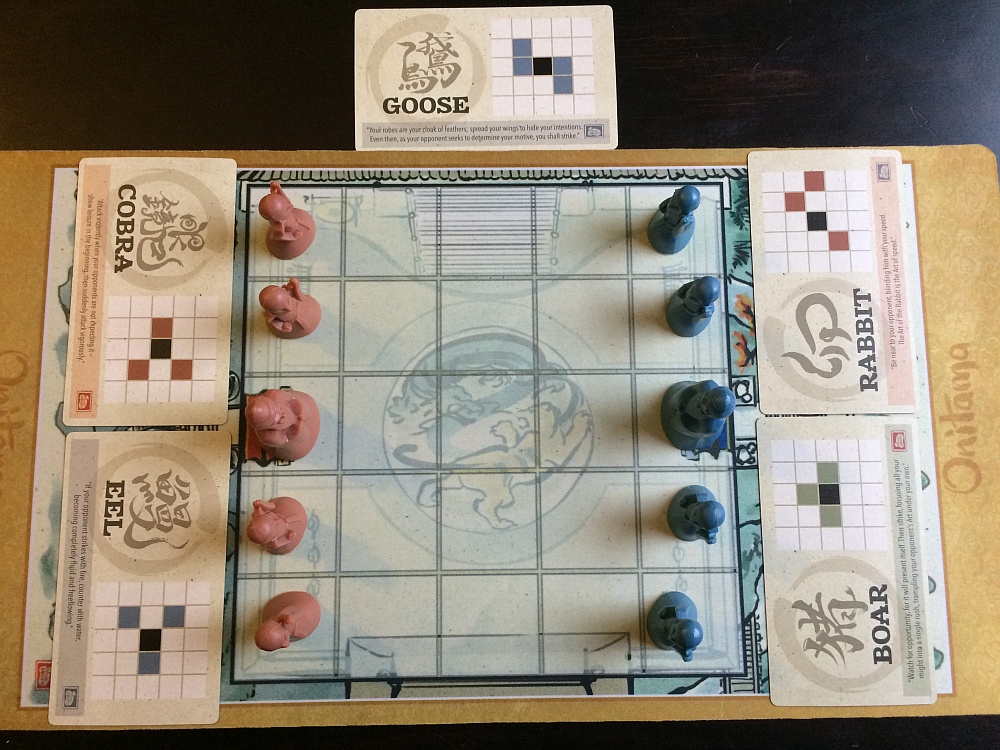 The Setup for Onitama

On your turn you’ll choose to use one of your movement cards to move your pawn in the style allowed by the played card. In our example above, if the Blue player chose to use the “Boar” movement, they would be allowed to move any of their pieces forward one space, due to the “Boar” allowing you to either move your piece left, right or forward one space. After Blue has move a piece forward, they would exchange the used “Boar” card with the “Goose” in the centre and it would then be Red players turn. Red would choose either the “Eel” or “Cobra” card to play, allowing them to move any piece diagonally forward left or diagonally forward right respectively as all other movements are currently invalid. After making this move, red would exchange the card that they moved with the “Boar” card in the center and play would switch back to the Blue player. This cycle continues until either player has captured the opponent’s Master pawn or they have moved their Master pawn into the space on the opposite side of the board where the opposing players Master pawn started. Pieces are captured by moving your piece onto a space occupied by an opposing players pawn. Capturing the Master Pawn is known as victory by Way of the Stone, and victory through moving to the opposite side is called Way of the Stream.

Now despite this game easily having the shortest rules explanation of any game that Cardboard Quest have reviewed, its ratio of strategic thought to simplicity is completely imbalanced in the best possible way. Whilst most easily compared with chess, Onitama creates such a strong karmic balance of attack focused movement instantly leading to the realization that those exact same strategic options will be open to your opponent in two moves time. Information is open, so players can constantly see what options your opponent has after you have made your move, making strategic thought constrained within the limitations of the cards. These constraints allow new players to easily grasp the challenges, depth and strategic options available for them to achieve victory without being bogged down of trying to remember options and rule sets. 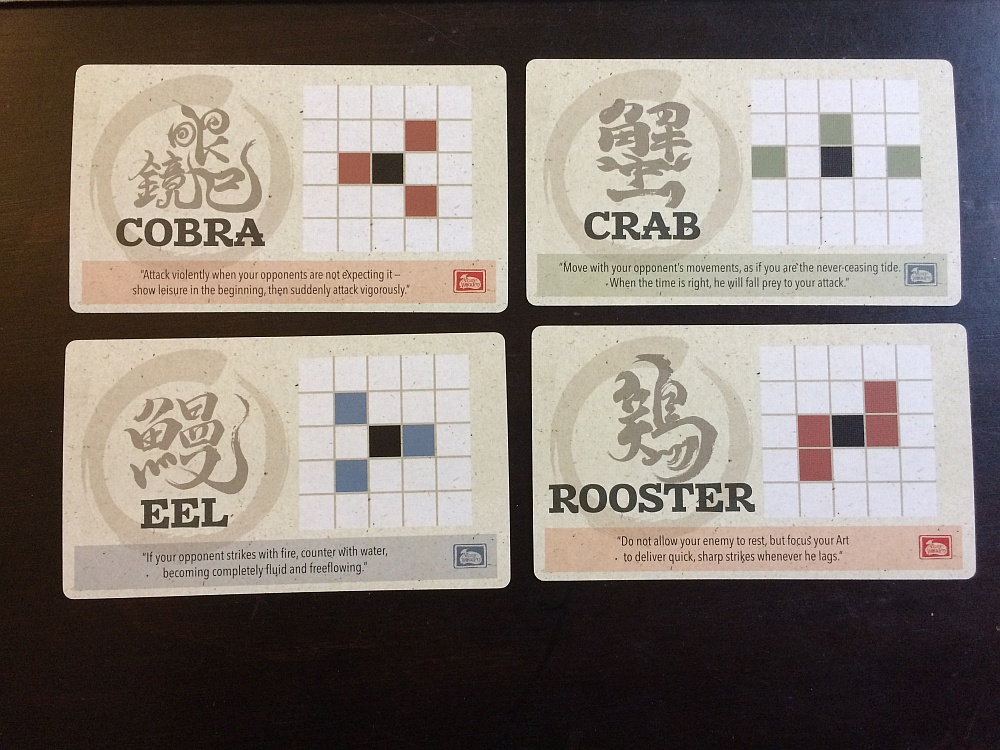 What Onitama gave me was a gaming experience that awoke that long dormant strategic head to head part of my mind. In most board games, I pick a strategy and opportunity based on advancing ahead of my opponents knowing that at the end of the game I will either emerge victorious or somewhere lower down the pecking order when there is no elimination. Most modern elimination style games are bluffing and deduction games, such as Werewolf, Deception: Murder in Hong Kong or Coup where information is hidden and its a different set of skills as to whether you succeed or bow out. Onitama makes me calculate each move. By moving here, what options will I have next round with the new card I exchange in the center? What does giving away this card do for my opponent? By making this play, what retribution do I open myself up for with the moves my opponent can now make? It’s a wonderfully distilled chess variant that requires focus on the immediate and strategic planning for potential moves coming in following turns.

Despite the constraints of the open information movements, the dual victory conditions create just enough choice to keep your opponent guessing. Do you move to constrain his Masters movement or simply whittle down his monks, and thereby reducing his options? If you rush for the victory by Way of the Stone, do you not entice him to evade and have your centre point occupied in a decisive victory by Way of the Stream? The game creates a beautiful karmic flow of every action having an equal and opposite reaction with the same five cards cycling between the players. 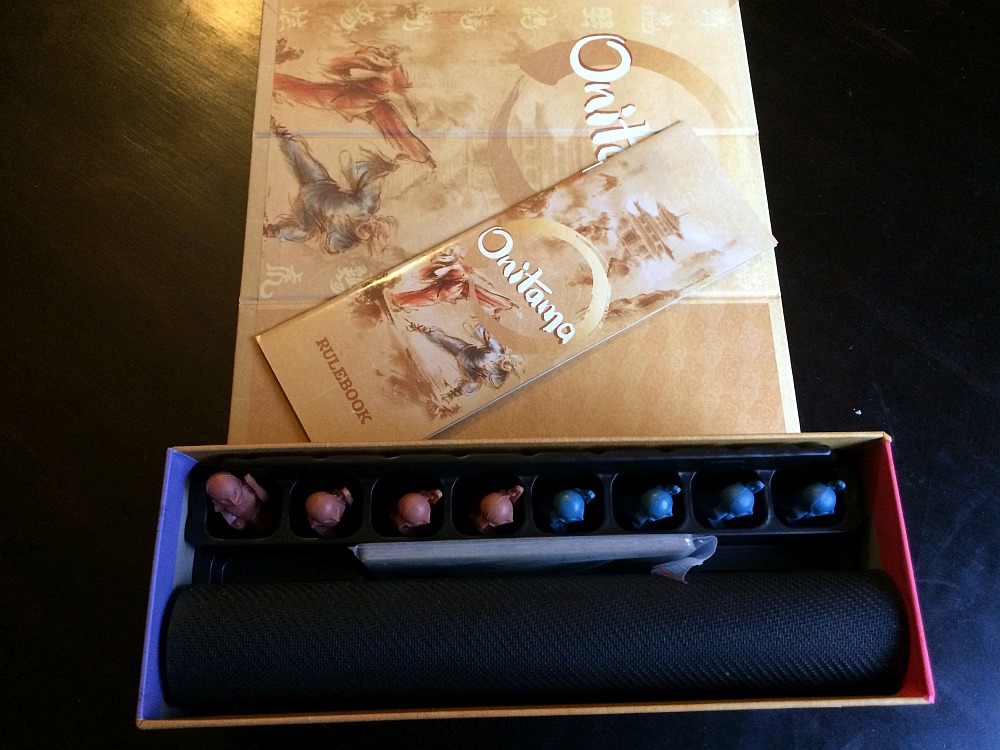 With its gameplay style of ebb and flow, the theme plays a subtle role in the immersion. The components are beautiful as well as controlled in their composition. The square grid of the Arcane Wonders retheme is bordered with artistic hues and colours, each mini supplied is sturdy and robust and all the card art contains calligraphy of a martial arts movement reminiscent of the animal name provided. With martial arts being all about balance and control, the intricate balance between offense and defense, what could have easily been a very pasted on theme may have more depth with considered thought. The presentation of this game is amazing for its price with a custom rolled playing mat, high quality card art and miniatures that all come packed in a portable, magnetically sealed container that shows  up FFG and many other publishers.

I love what Shimpei Sato has created with this game. It’s an amazing filler of 10-15 minutes that immediately has players lining up the pieces to start another round. With 15 movement cards and only 5 used each game, there is a wealth of replayability options in combinations that make each game feel unique and different while also preventing Chess like elements of robotic play. These simple 5 movements also create a welcoming environment to new players to enjoy the stimulation of strategic abstracts without feeling overwhelmed which means that I can bring this out to the same reception from a co-worker, significant other or friend. Needless to say, Onitama is my new favourite abstract and one that gets unpacked at least once a week to be played a great deal more.

Its hard to fault a small game which ticks all the boxes that it sets out to fill and then many of those that it was never supposed to. Onitama is a beautifully crafted abstract strategy game, repackaged into a theme that surprisingly enhances its immersion with excellent production values, and offers a great short tactical brain burn lasting only 15 minutes. At its low price point for what you get, if you have any interest in 2 player abstracts this game should be in your checkout immediately after you close this window.