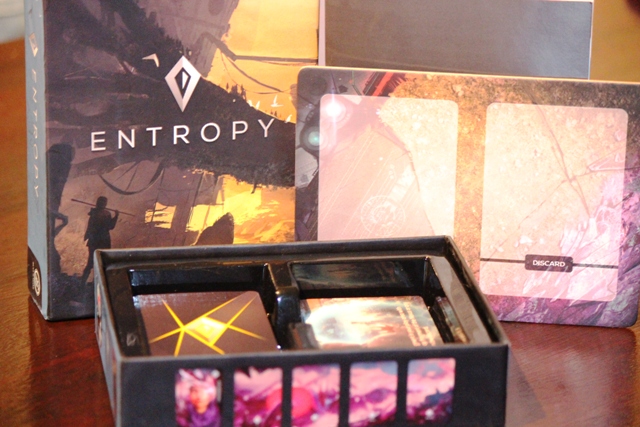 What is it? Like the pieces of the fractured reality you are tasked with restoring, Entropy attempts to form a complete experience from slivers of bluffing, deduction and simultaneous action selection. We dive into the chaotic Nexus to discover just what that reality looks like.

Here at CBQ, we do seem to possess a predilection for micro-games that employ bluffing and deduction. From Coup to Operation Faust to Love Letter, we derive a distinct measure of satisfaction from these sudden, limited and repeatable bursts of colour that demand street smarts and quick wits in equal measure.

But with a plethora of great games that occupy this particular niche, is there room for more? This was the question at the forefront of our minds as we cracked open a copy of Entropy from Aussie publisher Rule & Make.

It’s a question for another feature to explore in greater depth, but when theme isn’t critical to the gameplay, just how much can it possibly add to the overall experience? And I’m not talking about games like Imperial Assault for example, where the theme may well be interchangeable but nevertheless remains an intrinsic part of the enjoyment. Yes, the mechanics of the game would translate to a variety of settings, but there are elements of the version that is Imperial Assault that simply wouldn’t work in a fantasy setting. 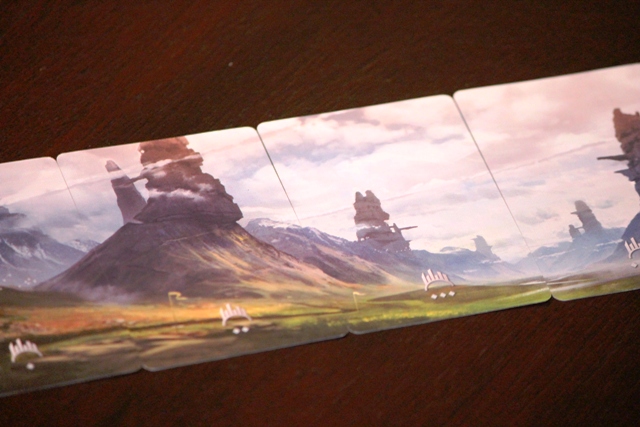 Whereas with a game like Love Letter, whether it’s Batman themed or Hobbit themed or even Adventure Time themed, the experience is that same. Sure, you may have someone who will be more likely to play the Batman version, but once the game is underway there’s nothing that the Batman theme does to change the nature of the game.

Why am I going on about this? Well, because the team from Rule & Make have done a tremendous job of imbuing their creation with a lovingly conceived theme, complete with worldbuilding and backstory by author Leith Vance, and even an original game soundtrack. If you were lucky enough to back their very successful Kickstarter version, I can imagine unboxing the game would have been an impressive endeavor indeed. Even the basic retail version that we received is nicely packaged and features a range of stunning artwork by Mike Yakovlev.

But how much does all of this additional work do to genuinely impact the gameplay experience?

Quick overview of the narrative; five parallel worlds have been flung together and space-time has collapsed on itself. This hyper-reality that you find yourself jettisoned in is referred to as the Nexus, and you are not alone. There are other travelers too, all attempting to locate fragments of their reality. Piece together yours first, and you just might make it back home.

Each player will choose a random character card as well as a set of action cards, but in a slight twist they also take a unique action card that corresponds to their character. Central to all players if the Nexus deck, which contains fragments of all player’s realities. Your goal, through sly selection of your action cards, is to find the four fragments that relate to your homeworld and place them to the right of your character card so that they form a panorama. 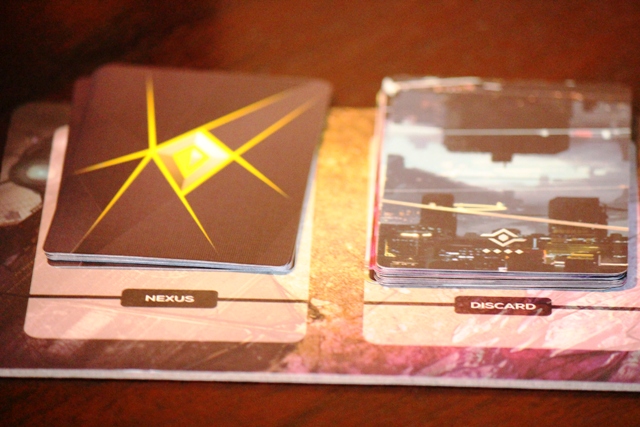 Turn structure is fairly simple, secretly select your action card for the phaes, flip it simultaneously, resolve order and resolve action. All the action cards have an initiative value 1 through 6, and cards are resolved in ascending order. However if two cards of the same number have been flipped, a temporal clash occurs and neither player resolves their cards action. Unless they happen to possess the Anchor token. Once four of these phases have taken place, a Fracture Event occurs, which is essentially a means of resetting the Nexus deck by shuffling the discard pile back in. It’s also the only time you’ll be able to reclaim used action cards, as once you’ve played on to the table it stays there for all four phases.

In terms of unique actions, one player will be able to draw an extra card every time they clash, another is able to choose an action that has already been played and resolve the effect again. Adaptive enables the player to search the Nexus deck for a fragment of their reality and place it on top, Persuasive ensures that whenever the Anchor would return to the central Nexus area, it instead returns to them. 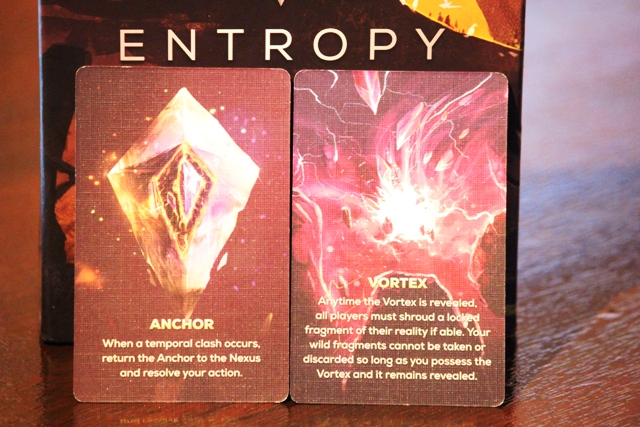 Add to the mix wild fragments (which act as a wild card), the Ronin expansion which introduces a more advanced character and a differing win condition and the Vortex fragment which acts as both protection for any wild fragments you possess as well as a potential last-minute win prevention, and there’s a decent amount of variation from one game to the next. As for scaling, certain action cards are removed when playing with 2, but 4 and 5 seems to be the game’s sweet spot.

For a game that plays in around 15 minutes, we were impressed at the level of thought that went into emphasising the nuances of the game. At 2 players, the Anchor is far less important than at 5, and even the process of a temporal clash offers up strategic options. You’d assume avoiding clashes without possessing the Anchor would be optimal, but if you’ve managed to clash three times in the course of a phase, when the Fracture Event occurs 3 fragments are dealt face-up, and you can claim one of the newly revealed cards if it belong to your reality.

Even the decisions around the ordering of initiative speak to a design team chiefly concerned with finding not only the right balance between the asymmetrical aspects, but also the right balance between take-that and a healthy dose of player interaction. Yes you can steal fragments from players and attempt to thwart their best laid plans, but it never feels unfair or mean-spirited. 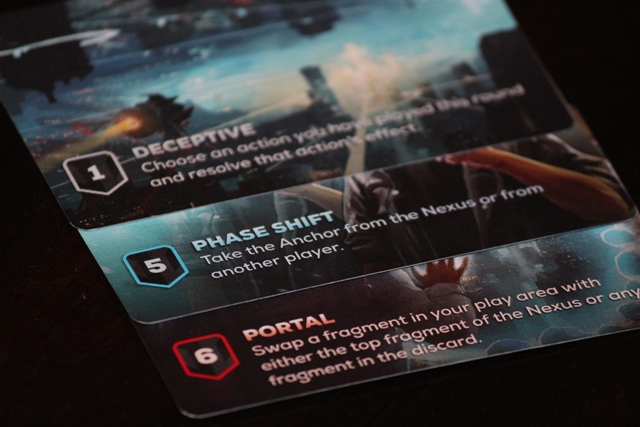 Where Entropy didn’t quite deliver, and this may certainly result from our own lack of experience with the game, is with the bluffing aspects. I can identify where bluffing is possible and where it may prove beneficial, but it lacks the immediacy of games like Coup and Operation Faust. This isn’t intrinsically a bad thing for sure, I mention it as if your chief interest in the game is based on the bluffing aspects, you may be disappointed. Entropy shines far brighter in mastering your timing – when to play certain actions, knowing what  actions your opponents can still play. Which is also the reason that it absolutely does find a space of its own in an increasingly crowded market. It creates sufficient desire to play multiple times in a single setting and succeeds in mixing familiar elements in a way that feels new.

Unfortunately, and this ties back in to my discussion around theming, the depth of narrative the designers have implemented though appreciated, is quickly relegated to an afterthought. And whilst this is absolutely true for similar games, Entropy has placed a lot of focus on the uniqueness of the panoramas as an aspect of the gameplay, and in reality after four or five rounds we may as well have been attempting to collect various items of clothing to make up a specific costume. As beautiful as those vistas are once pieced together, in practice the moment a player has collected their 4th fragment and won the game, the board is reset so quickly there’s little time for admiration.

In fairness though I’m probably more inclined to play Entropy because it has a science fiction theme, so I suppose I’m simply lamenting the effort that was put in that in the end yields so little. For us, it also exists in a slightly awkward space where it’s not quite light enough to and not quite chunky enough. And by that I mean it does require a degree of mental gymnastics that one can’t simply auto-pilot at the speed of a No Thanks! for example, but the satisfaction derived from winning is equally all too fleeting. For many of you that will potentially sound like a perfect fit, and if that’s the case I encourage you to have a look at Entropy in action.

It’s a solid micro-game, a labour of love that speaks volumes of the potential that designers Allen Chang and Alistair Kearney possess and we’ll absolutely be following their next project with interest.

With thanks to the folks at Rule & Make, who were generous enough to supply a review copy of Entropy

Will I play Entropy again? Yes. We enjoyed our time with the game and were for the most part pleasantly surprised. Am I eager to try it out with friends who've not played it yet? That's the more difficult question to answer. I'd certainly be happy if it hit the table, but I'm just not convinced I would recommend it above an Operation Faust or a Deception: Murder in Hong Kong. That's not a fault of the game, though, simply a matter of personal taste.