On Saturday the 11th of June 2016, a group of fourteen knights found themselves braving the chill morning air as they waited for the steward of the keep to open the gates. The jovial mood seemed at odds what with the pain and bloodshed to come, but as knights they all know the only path to triumph is paved with suffering and torment. Walk that path for long enough and you don’t even notice the dark shadows anymore. And though these knights rode under clashing banners – Houses Stark and Greyjoy, Lannister, Tyrell and more – their shared history provides a common ground upon which all swear allegiance to notions of honour and duty. 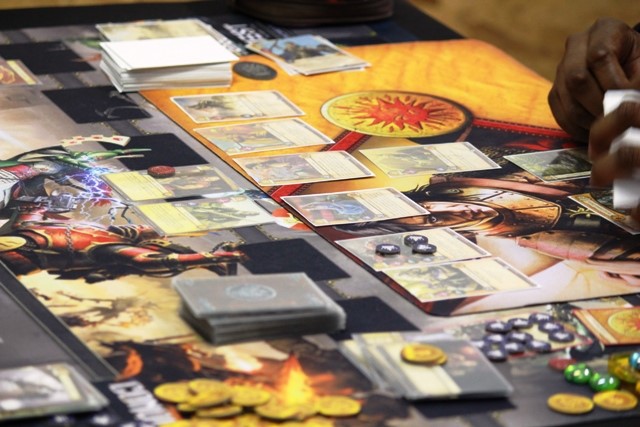 The blazing sun of House Martell, close to victory

Yes, yes, perhaps I exaggerate ever so slightly in calling myself a knight, especially considering that this was my first competitive tournament of anything card-based, but one should never show your enemy the fear in your eyes. Well, either that or the fact that the other competitors were all genuinely amiable fellows made for a festal atmosphere. As soon as the doors of Quantum Gaming opened, these brave souls from as far as beyond The Wall (or The Boerewors Curtain, whichever you prefer) dropped all semblance of good will, and South Africa’s first Game of Thrones 2nd Edition LCG Tournament was underway.

Thrones tournaments utilise the Swiss format, which simply means that players are drawn randomly to begin with, and thereafter play multiple rounds against similarly weighted opponents. If you win your first game, your second will still be randomly assigned, but against someone who also won their first game. If the group is large enough, there will be a cut after the Swiss rounds which follows the more traditional elimination route. Rounds in Swiss have 55 minute time limit – once the limit has been exceeded the current turn plays out and the player with the most power gets a modified win. 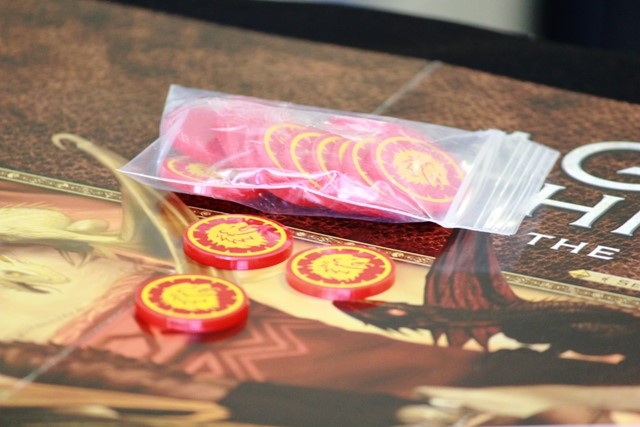 To the victor, custom power tokens. I hate the Lannisters, but those tokens are pretty sweet

Before I pen a quick wrap up of the actual event, just a few quick observations for future participants, or those who may have been eager to join but had concerns about not having sufficient experience: 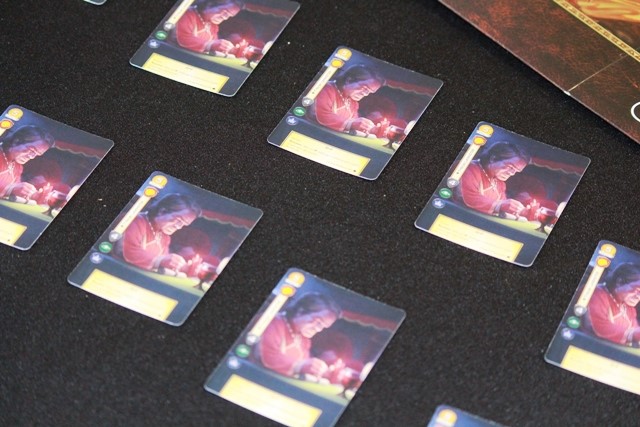 House Greyjoy may be somewhat in disarray currently in the series, but they certainly proved the belle of the ball and were comfortably the most popular faction of the day. Starks and Lannisters also featured strongly, a sprinkling of Martell and Baratheon and even a Night’s Watch Fealty deck appropriately named Pissing off the Wall. CBQ was duly represented by myself and Stuart, running Martell/Banner of the Sun and Lannister/Lord of the Crossing Decks respectively.

Once the dust had settled, I’d managed to pilot my deck to two wins against Greyjoy and Martell Fealty, but also losing two against Stark Fealty and a ridiculous Greyjoy/Lord of the Crossing power rush deck that devoured mine with such ferocity I’ll be feeling the Iron Price for weeks. Stuart fared better, with only one loss for the day against Martell Fealty, getting hit by two Milk of the Poppies in a single turn. 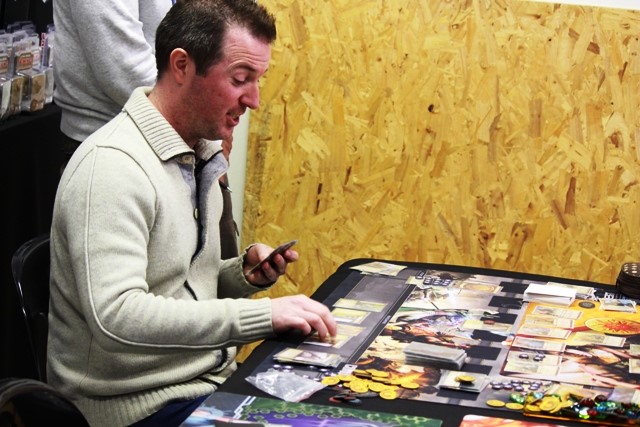 Stuart’s smile did not last long…

Things were very close at the top with only one player reaching the final round without having dropped a game. And his Tyrell/Lord of the Crossing deck proved too strong in that final game, ensuring that Pierre Alexei was crowned as South Africa’s inaugural Game of Thrones store champion. Pierre commanded his knights with skill and cunning, and was indeed a worthy winner. I was delighted to see my fellow brother of the Night’s Watch Etienne Le Roux claim the runners-up spot with his NW Fealty deck, with the top three bring rounded out by Troy ‘The Dark Lord’ Smuts running Stark Fealty.

Big thanks to Niz for organising the tournament and to all who participated – we have the makings of a great local community and I’d like to encourage the rest of the country to kickstart communities in their FLGS. And if you’re just curious about the game and still many miles away from considering competitive play, find out from your FLGS when local Thrones players meet for casual play, and you’ll find almost all will be more than happy to teach you the game, or walk you through the finer points. Not only is it a great way to nurture a love for the game, it’s also a great way to make new friends. Check out Quantum Gaming’s Facebook page to find out about upcoming special events, but Tuesday nights are LCG nights, so come join us! 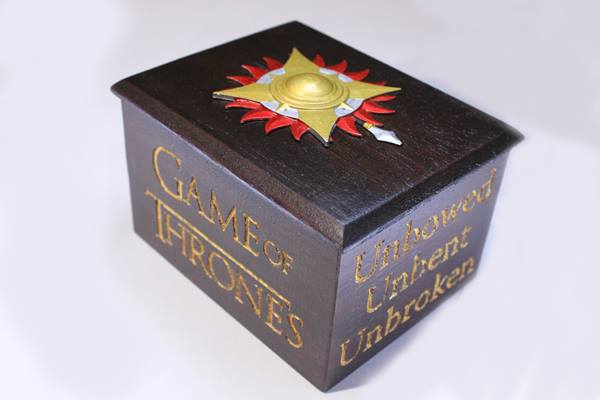 You know you want one…

Lastly, though my Martell deck may not have performed brilliantly, it arrived at the tournament in grand style thanks to Megesh from Just Signs. This custom made deck box is a thing of beauty, from its exquisite 3d custom sigil on the lid to the crushed velvet interior. Just Signs will custom make your own LCG deck box, from Thrones to Warhammer to Netrunner, in three different options – personalised engraving on the box sides and lid, engraving with lid and velvet interior, or engraving with custom sigil and velvet interior. If you’re interested in customising components for other games, Just Signs are keen to give life to your creative imaginings! 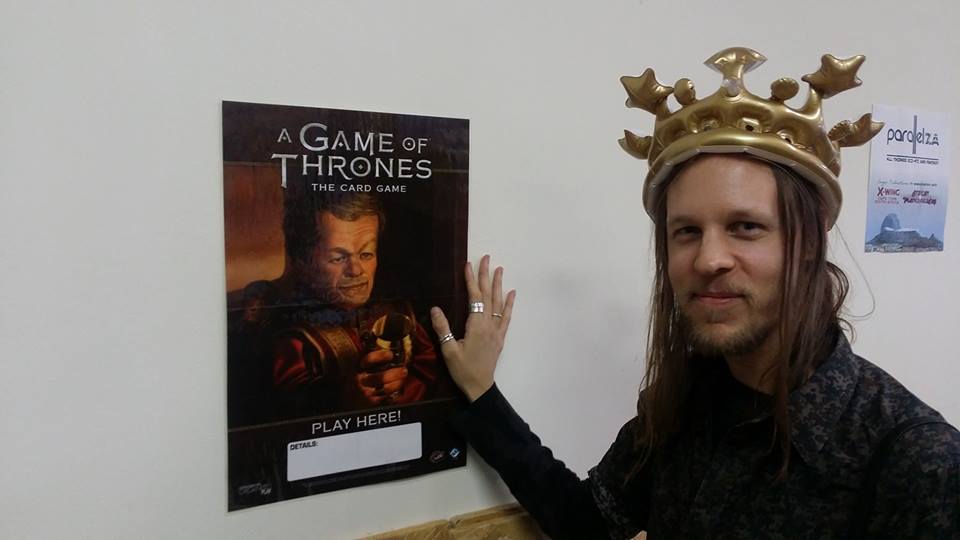