In 2014, local development studio Pleasant Company Games ushered an Unspeakable Event upon the world in the form of Ancient Terrible Things. And as with all tentacled entities, no one was sure just what to expect. Cut to 2017, and ATT has enjoyed great success as well as an expansion, and Pleasant Company Games has also gone on to release Snowblind to equally positive reviews. Designer Simon McGregor and artist Rob van Zyl have clearly hit upon a rich vein of that rare magic that only histories greatest duos share – Simon & Garfunkel, Murtuagh & Riggs, Cable & Deadpool. 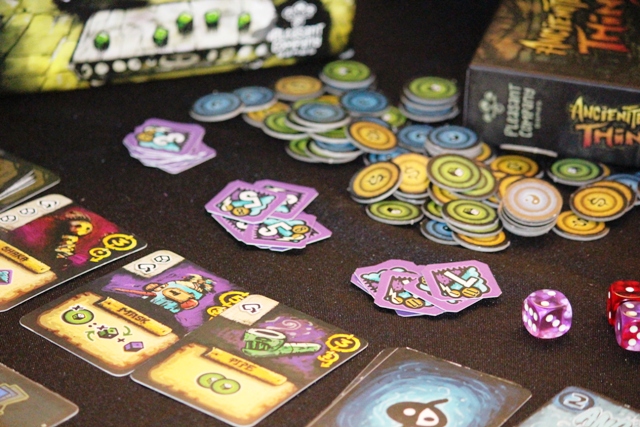 This is most definitely not a bland looking game…

Any doubts as to their reputation were quickly dispelled when their newest collaboration, Konja, was funded in a day on Kickstarter. As I strolled the halls of the recent Fancon expo in Cape Town, I came upon the distinctive artstyle that is now easily recognisable as belonging to Rob and found myself drawn into watching a demo in progress. Without discerning exactly what was transpiring on the table and after having seen a variety of international games in progress, I recall very clearly thinking, ‘This feels right’.

What exactly felt right? Well I do have a fondness for Rob’s art, that certainly helps, but it was mainly how Konja exuded a sense of uniqueness. I love the theme and how its mischievousness is presented, and on the surface the game appears to fit snugly within the quick-playing segment of the market, alongside the other Yahtzee style games that have grown so steadily in popularity. And given that this particular genre has by its very nature a wider appeal and a more pleasing price point, it also feels like the right choice in style of game to push PCG further into the limelight. I didn’t know then that Konja had hit its funding level so quickly, but it would seem that my initial instincts were very much in line with the community. 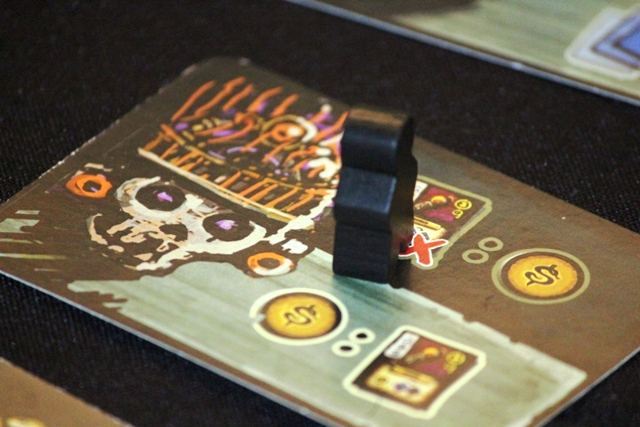 The Merchant Ancestor, hungry for worship and gold

Simply put, Konja is a dice chucker that aims to inject the genre with a healthy dose of freshness. As competing shaman wizards, the aim is to conjure the biggest storm and bring much needed relief to the drought stricken land. I’m not going to plumb the depths of a rules explanation – their Kickstarter page does an excellent job of breaking down a typical turn – but if you’ve played games such as Favor of the Pharaoh you should feel right at home. I’d prefer to highlight the aspects of the game that twist traditional expectations in a most pleasing way.

First off, Konja uses a form of role selection that presents many interesting decisions. Each game calls upon the assistance of five Ancestors, each of whom offer aid in two forms: the Ancestor’s Favour which is given to the player activating it, and the Ancestor’s Blessing which is bestowed upon all players. So for example, the Merchant Ancestor allows the active player to both sell Relic cards in his hand for their gold value and buy new ones, whilst the second player only gets to make a purchase. 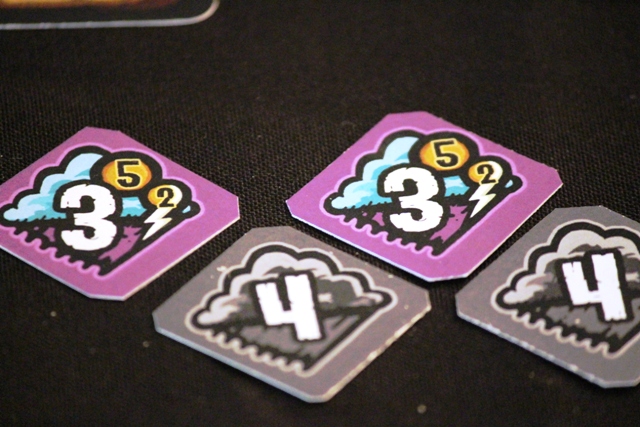 Cloud VPs, worth 3, can be purchased to 5 gold or can be flipped for 2 gold to the 4 VP side

Often the smart play is to call on an Ancestor when your opponent will derive no benefit at all, rather than choose the option which may well be your first choice. Once an Ancestor has received your litany, they cannot be called upon again until all the Ancestors have been sated – you’ll only be able to use the same Ancestor four turns later in other words, so timing is everything.

The other neat twist which we felt was a very smart design choice, is the Red die. On your opponents turn, once they have decided which dice they choose to activate, you can roll a red die and substitute the result. Stuart rolls the dice, and his results include three dice showing 2 pips each. According to the Pyramid of Summoning, he could use that result to take a cloud worth 3 VPs, but if I roll a 3 I can knock out one of this 2 results. But be careful, if your focus is too narrow you may substitute out a die and end up giving him a better result. Also, these red die attacks are initiated by tapping Relic cards and since cards can only be untapped by praying to the correct Ancestor, attacking is not an action you can repeat with reckless abandon. 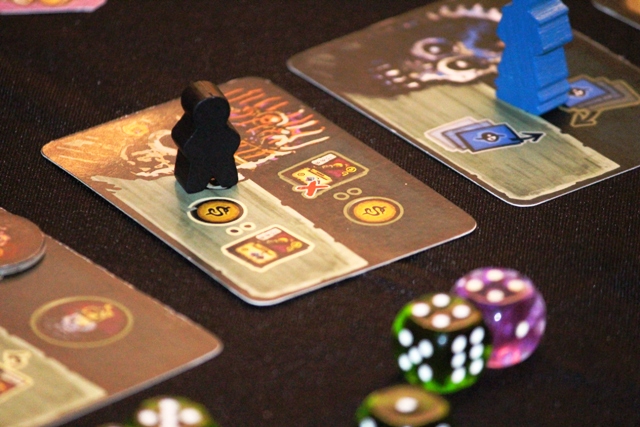 There’s a lot going on in Konja. Spell cards with potent effects, the Purple die, the ability to flip clouds to the side with a higher VP and for opponents to flip them back again! We appreciated the light dusting of Yahtzee the design incorporates without making it the focus of the game – you could simply just collect enough Gold to buy your way to victory if you play your cards right.

Our only criticism, and this is common for the genre, is that the iconography will take a game or two to click and it wasn’t perhaps as intuitive as it could have been. But given that you can play Konja three times in less than an hour, it’s not really much of a complaint. It also remains to be seen how well it stands up to repeated play in terms of balance and engagement – this isn’t a game designed to be played every few months so it’s important that it feels as if the various strategies are on equal footing. 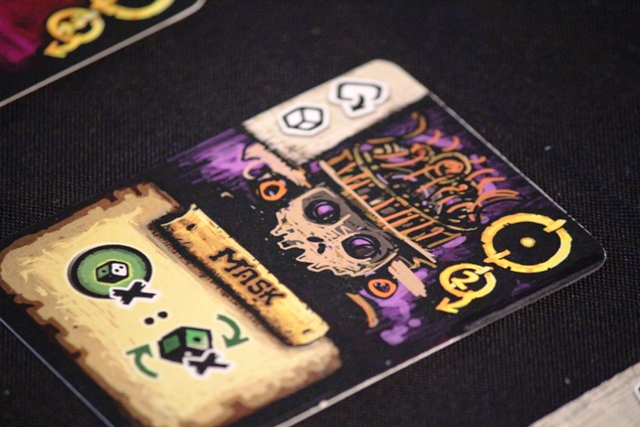 A Relic card, many of which allow for rerolling dice

First impressions last, as they say, and Konja made a good one. Check out the game in action on the Kickstarter page and if you like what you see, $26 is a pretty decent investment in both a mischievous little game and an impressive local studio.

Thanks to Adhil for the demo – if I got any rules wrong it’s absolutely his fault.