We’ve got a guest reviewer this week, for a Grey Fox Games and Richard Launius Yahtzee-styled zombie fest. Morne Schaap has been playing tabletop games for years, and recently has had his own setting for Savage Worlds published. You can follow Just Insert Imagination here.

Groans echo in the courtyard. As you peek around the corner you see a dozen zombies shuffle out of the darkness. You wipe your sweating hands on your pants before gripping the baseball bat you found. “Ahem”. A bony finger pokes you in the back. “Are you seeing someone? I know a girl who would be perfect for you. Our Merrel is quite the catch.” The zombies moan louder as they turn towards your hiding place. This is gonna get rough.

Run, Fight or Die is a fun, “push your luck” dice game I recently discovered. It comes with some cool mechanics, nice artwork on the cards, a stack of dice and a bag full of zombies. Each player gets a character with his or her own unique skill. You can play characters like The Athlete, the Country Girl or the Sweet Prom Girl, with each character possessing a special ability and a dice combo bonus. The Army Vet gets an additional reroll per turn, and dice combos generally allow you to manage the incoming hordes. As much as slobbering zombies are manageable.

If you know King of Tokyo, you should have a good idea of the main mechanic. You roll a handful of dice with different icons on them. An Event die sets the tone for your turn. Depending on what icon is rolled, your turn could get more difficult and dangerous or you could be healed. Then you roll six dice with the following icons on them: a bat, a gun, a book, a running figure, grasping hands and a zombie. You decide which ones you keep and which you reroll (though you have to keep the zombie icons). Are you going to try for more baseball bat icons or are you going to stick with what you have? Decisions, decisions. 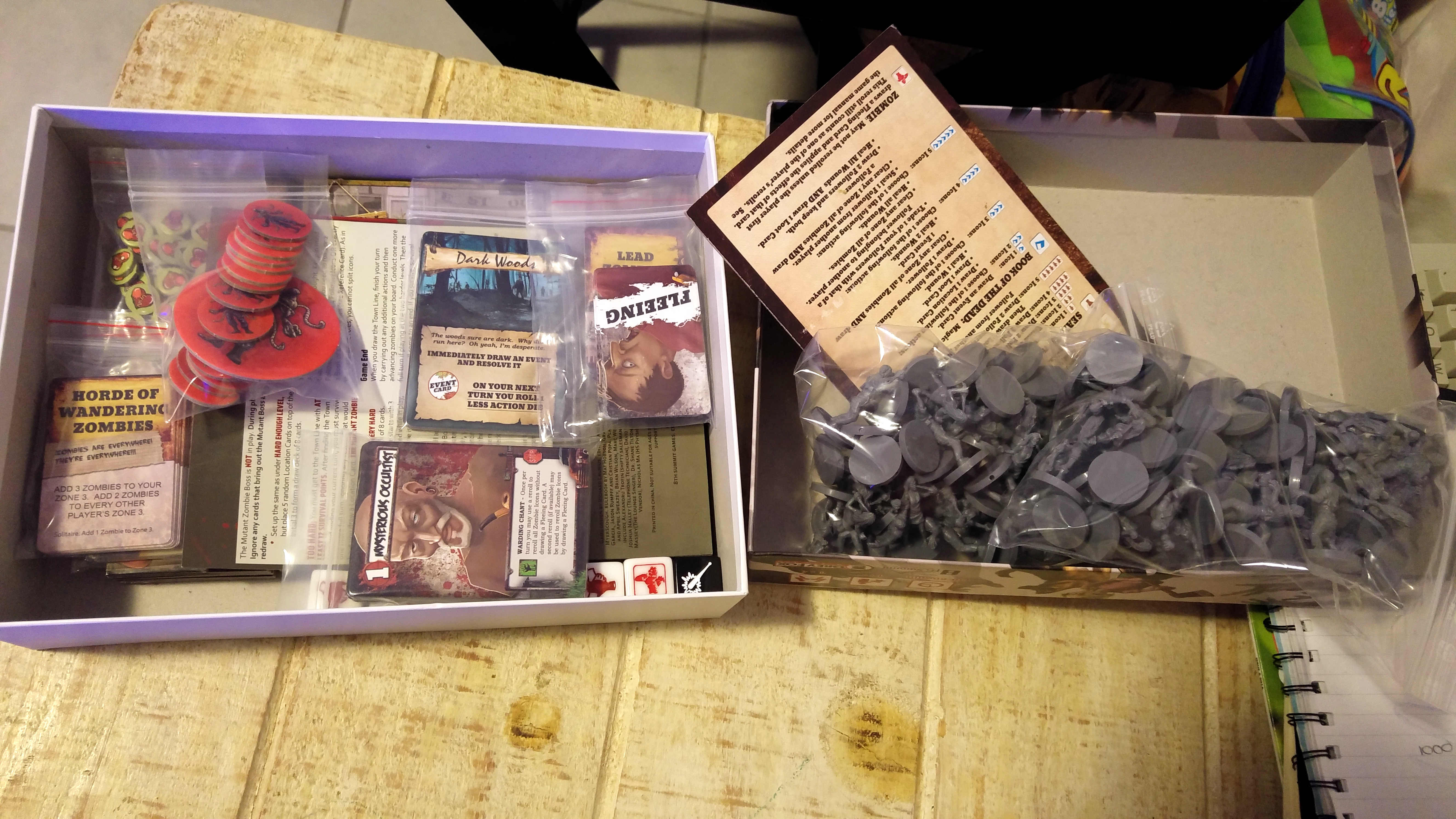 A zombie icon on each dice adds one zombie to the pack of undead already shuffling towards you. This is the other cool mechanic I like. Each player gets an Action Board with three distance zones on it. Basically zone 1 is “right in your face”, zone 2 is “over there but far enough to avoid” and zone 3 is “just stumbled into view”. It is on this board the zombies from the dice and some cards get added. Each round they move through the zones closer to you and basically make your survival as difficult as possible. Every zombie that makes it to your character card is a wound you take. Most characters can survive five wounds before they are dead. The game ends when a character dies and that player is not allowed to tally his or her victory points.

If you want to reroll the dice with zombie icons, you can draw a Fleeing card. Rerolling these dice does not guarantee you won’t just roll zombie icons again and these cards usually have something bad happen to the player (like more zombies or losing all your loot), but rerolling could save your bacon. 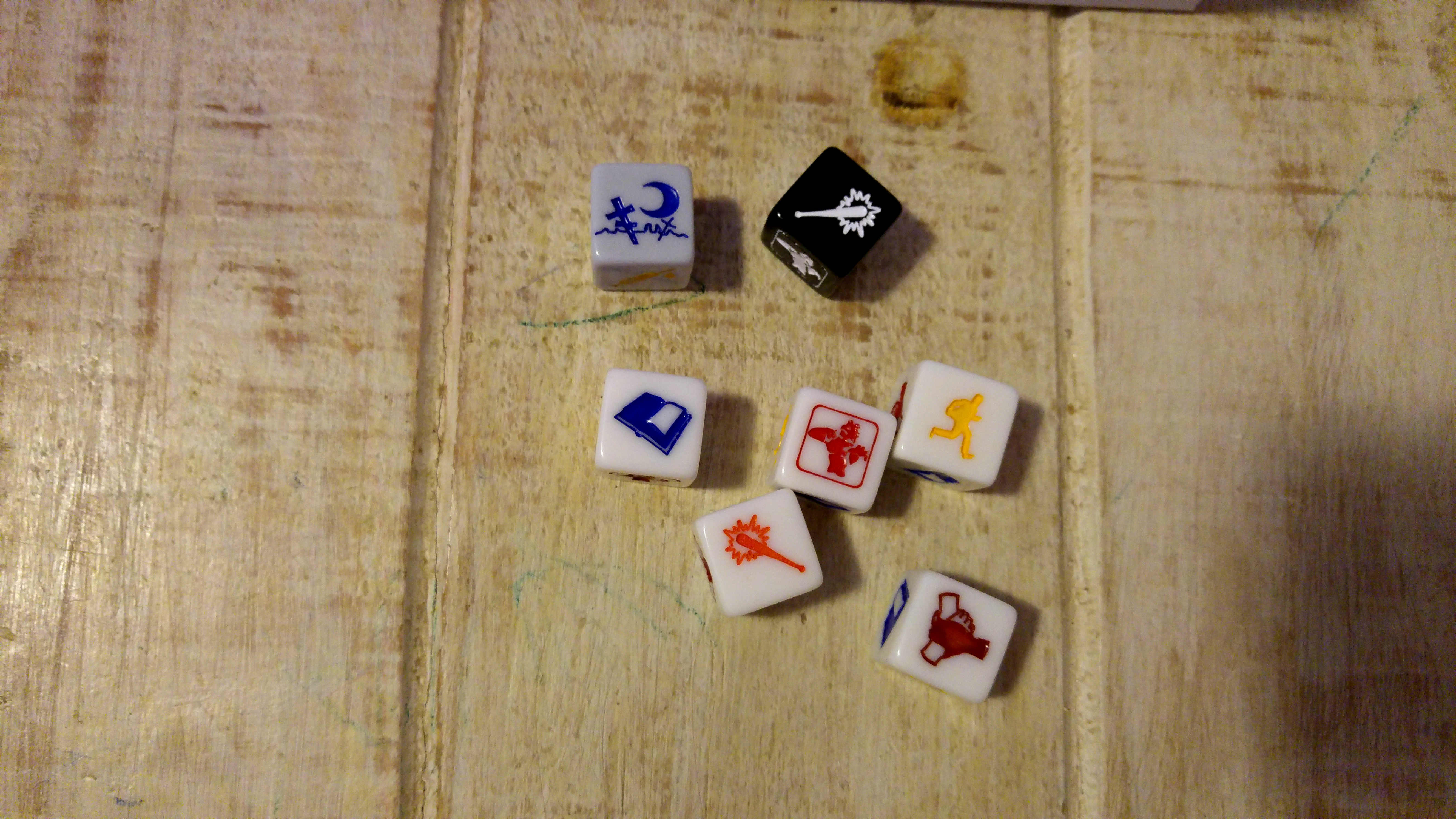 During the game you get to draw different types of cards. Location cards could be places like a police station where you get loot, the cinema or the high school. Some places are deadly and add more zombies to your Action Board. Followers are people you encounter who stay with you to survive. Some help you fight, while others just get in the way. The bigger a hindrance they are, the higher the victory points they award when the game ends. In this deck you will find survivors like The Cool Guy, the Dumb Jock or the Hot Chick with an Attitude. The Dumb Jock may let you kill an extra zombie per turn, but he’s only worth 2 points.

Both the Location or Follower cards can help or hinder and it is always a gamble when deciding to draw one. Loot could be anything from the expected chainsaws and axes, to med kits or other helpful items. Event cards are seldom good and usually involve something bad happening to your character. Or someone elses character. Like moving zombies from your zones to another players. Which I suppose is actually quite decent. For you. Not for your friendship.

If you are really unlucky you draw the Mutant Zombie card. This horror attacks every player on his or her turn and stays in play till it is killed, which could take a few rounds of teamwork. It’s unfortunate that for a game with so many zombie models, the Mutant is just a large token, but one would imagine compromises had to be made to meet the ideal cost range. 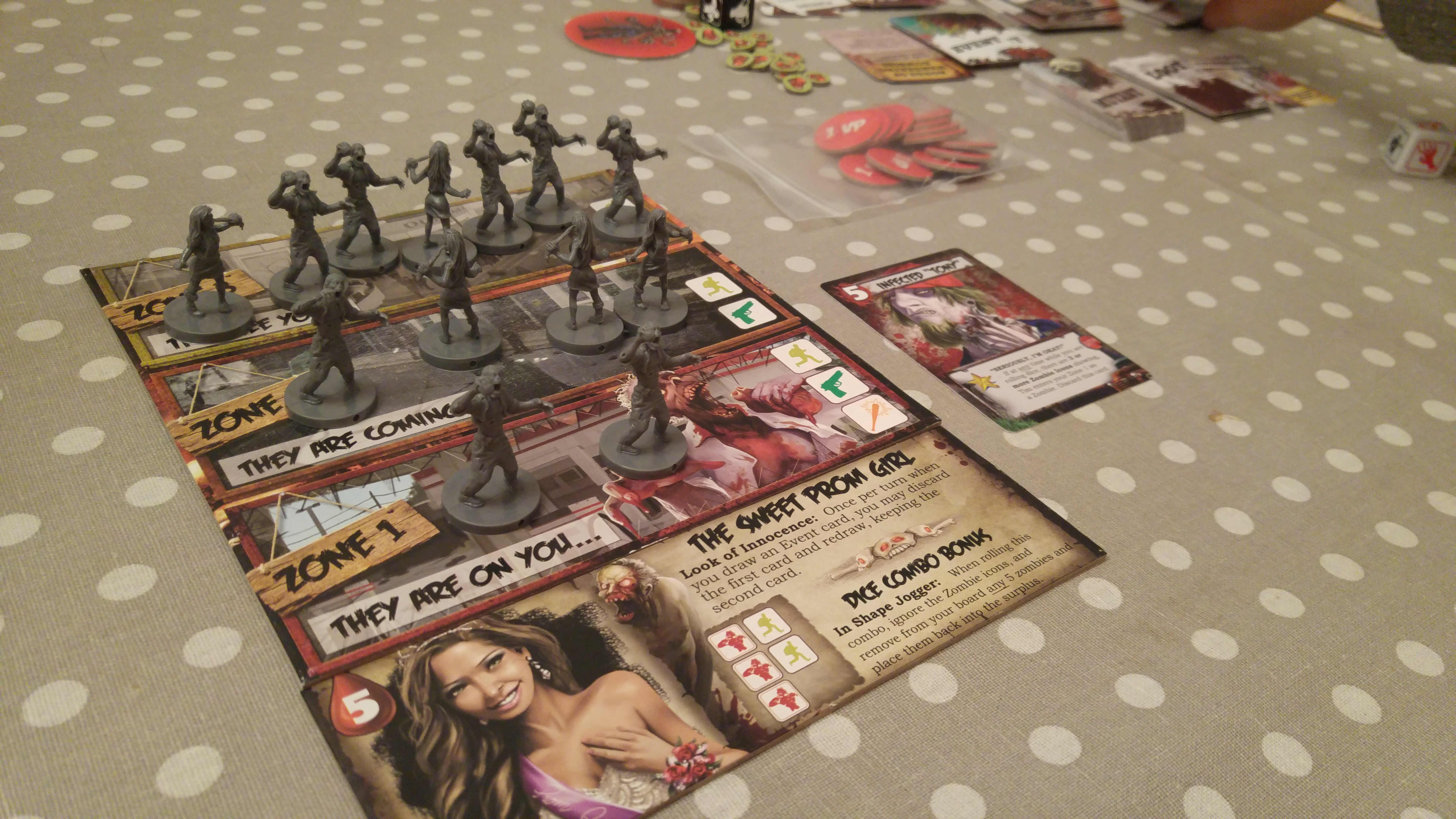 There are a few other small things, but this should give you a good idea of game play. I would rather tell you how much fun we had. And did I mention how brutal the game can be? Our first game was over in less than 10 minutes, when I was chewed to pieces. My poor Phone Technician never had a chance.

We had lots of laughs as the zombies started to overwhelm other players, dice rolls sucked or that last desperate re-roll actually ended on the icon needed to keep the player from becoming zombie food. Things can go wrong pretty fast, but one good roll could see you in the clear and on your way to win.

There’s less take-that or player interaction as is found in King of Tokyo, but the implementation of theme is excellent and that has allowed designer Richard Launius to implement a solo variant. 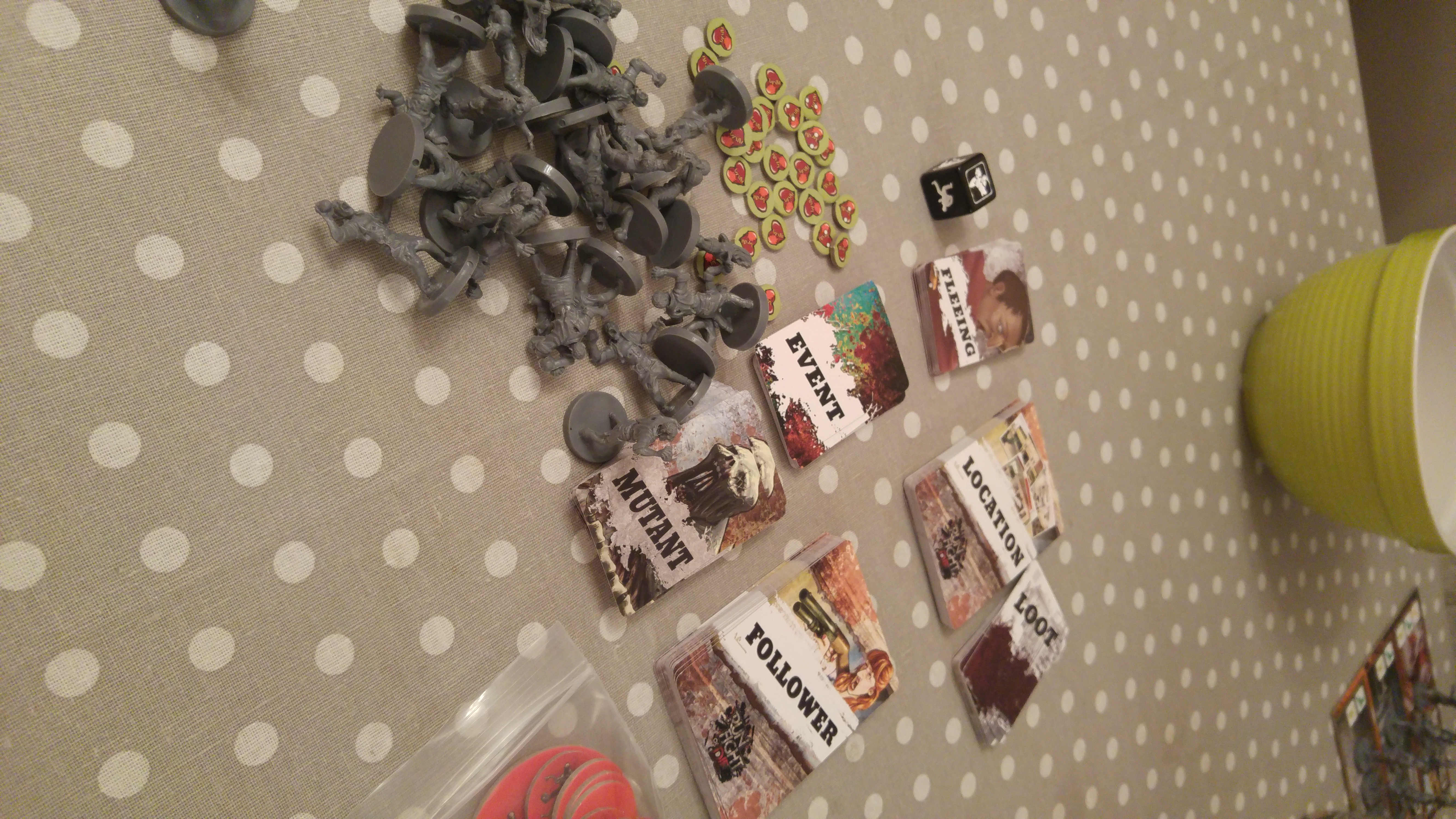 Run, Fight or Die is a light, easy to learn game for evenings when you are tired of that in-depth, week-long strategy game you’ve been playing. I really like the Action Board and how it changes with your struggles to stay ahead of the ever closing, hungry pack. The cliché player characters add to the “not too serious” feel of the game and some of the follower characters, like the old grandmother, caused a lot of laughter around the table.

The production value of the game is good. The models look cool, the artwork is funny and the card stock is decent and sturdy. The included Actions and Events guides make it easy for each player to quickly have a look when rolling dice, though I’d recommend making multiple copies as passing it from player to player becomes a pain.

I can recommend the game if you are looking for something funny and fun to play. It plays four, but an expansion adds another two players. Be sure to stretch before you start though, you will be doing a lot of running to keep ahead of the zombie hoard.