There is always the calm before the storm. The rumblings of Origins and the UK Game Fair can be heard in the distance, yet the ground and our tables are dry. We’re nibbling on the leftovers from the previous year, savouring all the rich flavours of Arkham, dried fruit from the plantations of mars and the last sips of the Inis whiskey on the rocks. Yet we can hear what is coming and need to prepare ourselves and develop strategies, make sure we have enough rations to supply all our troops to send out to meet the new arrivals and hope that we have a little luck on our side. Let me tell you what we have recently heard. 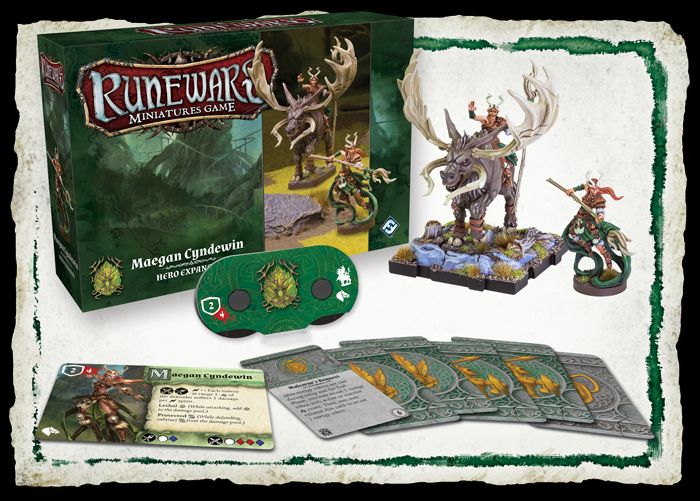 After our recent early impressions and knowing that simply two core armies were unsustainable, Fantasy Flight Games have announced a reinforcements for Runewars: The Miniatures Game for the Daqan Lords as well as additional units for the Latari Elves. The Daqan Lords will gain a new hero in the from of Lord Hawthorne, a Gallant mounted hero who specialises in multiple attacks and boons, able to inspire troops around in as well as slash in arcs for maximum casualties and even perform additional attacks on units not previously targeted in a single turn. Truly an inspiration for the spearman! For the Elven heroes, Lady Maegan Cyndewin is a powerful sorceress who can turn the tides of battle with 4 dice melee attacks and the ability to summon storms onto the battlefield and bathe her enemies in burning rain! These heroes and more troops will all deploy in Q3.

Staying with miniatures and burning, after the scorched armies with the release of Age of Sigmar and the outcry from fans who destroyed their Warhammer Fantasy armies in protest (sigh), Games Workshop have announced some details in regards to the reworking of the Warhammer 40k miniatures game that will not be rendering veteran armies redundant. making use of all our old armies in a darker and grittier world, the ruleset has been worked on in collaboration with the fans to create 3 new game modes. There will be an easy pick up and play option for new comers to get right into it, a narrative set of rules where players will recreate famous armies from the rich Lore of the eternal war and lastly the competitive scene where players will build armies to rigid specifications. I’ve always loved the lore and never bit the bullet (possibly literally) and this may be my time. 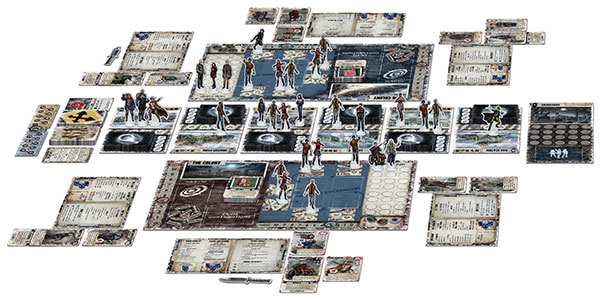 Over at Plaid Hat Games, things seem to have come to a crossroads in the Dead of Winter Universe and players will need to grab the new expansion to get players to work together in the new narrative twist of Warring Colonies. Designed by founder Colby Dauch and Timothy Meyer, Warring Colonies introduces team play with 4-11 player options as colonies battle on central locations with additional combat mechanics and unique colony goals to determine winners. Warring factions will feature simultaneous play mechanics to eliminate downtime and fans of the series will be happy to know that all previous Dead of winter content can be lumped together with Warring colonies. Betrayal may be served with a side of Fava beans and Chianti.

With fans loving the system of Shadowrun: Crossfire, Catalyst Games are teaming up with Wizards of the Coast to re-implement the system in the co-op deck building game, Dragonfire. It’s early in the tale of this epic quest but players will choose from classic D&D races and classes to build deck to solve quests in famous locations in the Forgotten Realms, like Waterdeep, Neverwinter and Baldur’s Gate. This theme may encourage more gamers to try the system, but Shadowrun: Crossfire fans should rejoice in knowing an expansion is still on the way for them.

Really wish you could re-enact the fall of Carthage or prevent this from happening at all on your table while making the sound of bellowing hordes and moving elephants across the table? The 20 year classic 2 player war game of Hannibal & Hamilcar from Mark Simonitch has a lovely Anniversary edition on kickstarter at the moment begging for your pledge. Now, I’ve never found myself to be a war game connoisseur but this title looks gorgeous and amazingly produced with some of the best miniatures in historical war games I have ever seen. Hailed as one of the greatest 2 player war games of all time, this game has a proven pedigree which makes it an insta buy for lovers of the genre and puts me in a position that has me thinking that war games may indeed be for me too. What’s that, a spear in my back… alright, alright.. 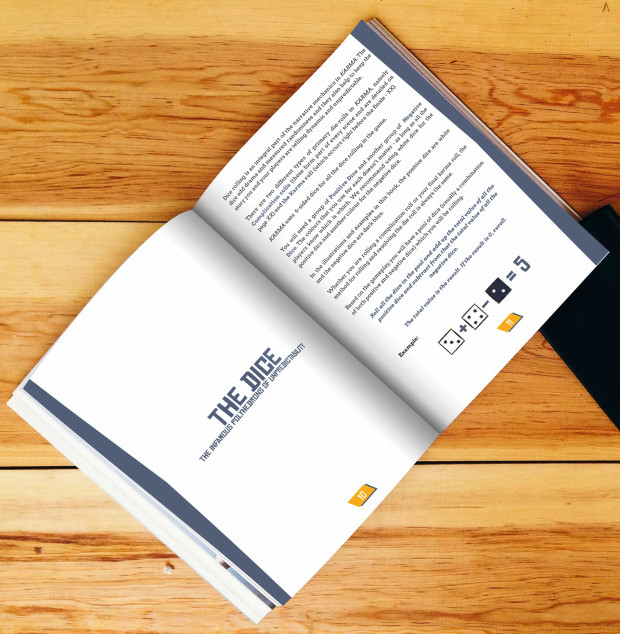 Ever sat back and thought about how your previous actions and live choices may be coming back to haunt you when you hit a string of unfortunate experiences? Local South African Lad, Gareth Graham thought the same thing and created a GM-less RPG experience, Karma: A Roleplaying Game for 3-5 players that plays in around 2 hours that will have you questioning your moral judgement, one decision at a time. From Frenzy Kitten Games, players will be throwing spanners in each others narrative lives as the story progresses, driving players to unique module conclusion depending on how the various scenes play out. Each story module sounds like a unique experience and the project is ideal for those interesting in dipping their toes into the world of RPGs!

Ever dreamed of being a game designer but just had no idea where to start? Atlas and Gameplaywright have got a clean, clinical White Box of Game Design that contains everything you might need to get your started. Not just a bunch of cubes and colouring pencils, you’ll find custom tokens and a wealth of essays from industry experts on mechanisms and design options to give you a direction on where to go. Your imagination is the only limitations that will contain your designs so think of anything you’d love to do in any world and let the cardboard do the rest. 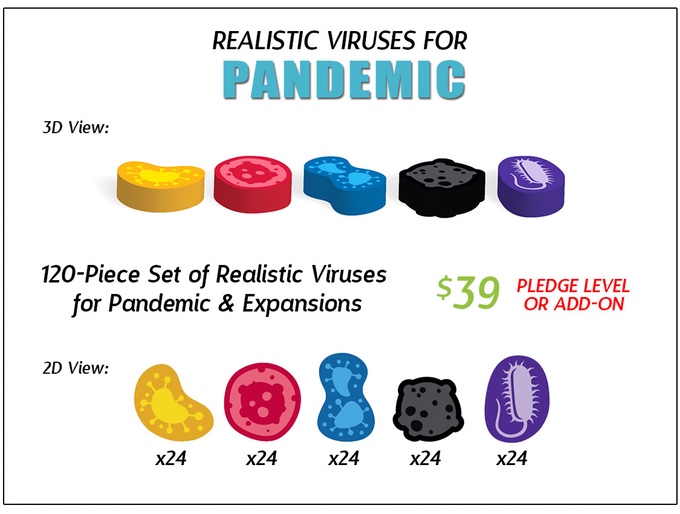 We love board game bling, so anything that Meeplesource puts out has got our attention and they are at it again with the Game Upgrades 3.0 campaign on Kickstarter. Covering  the unreleased Charterstone from Stonemeier Games, Catan and all its expansions, Camel Cup and PAndemic, as well as Red Raven Games (Above and Below, Empires of the Void II) there is almost any bit you’d want between your teeth (no kids dont put board game pieces in your mouth). You’ll find more options and a reminder just to keep checking their site to really make your board games leap to life from the table.

Lastly, Daily Magic Games continue to impress me with each title they bring to the market with Food Truck Champions and each game in the Valeria series looking gorgeous and offering interesting gameplay options in the rules. Their latest, Sailing towards Osiris, players will be competing to honour the pharaoh as he sails to his tomb by building monuments along the banks of the Nile to be deemed the one worthy to lead the internment. In a traditional style worker placement game, players will be using labourers to gather resources, build monuments, trade and visit cities in order to bring glory to your house. The production looks charming with wooden components and thematic art styles to bring the era of Egypt to life. If you like the look of it, $49 will get you the standard edition excluding shipping. 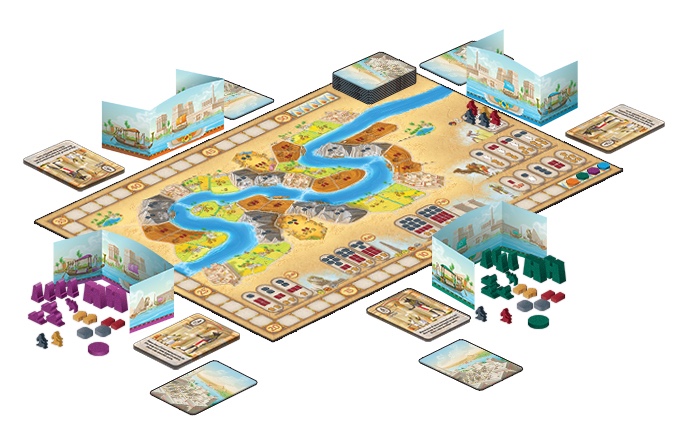 That’s all for this week guys and gals, we’ve been short a few review copies in the last while, but look forward to Paul’s discussion of Arcadia Quest from our time at Paulcon, as well as a look at the Voyages of Marco Polo and some upcoming South African Games we got to play from local designers.  Good Gaming all!