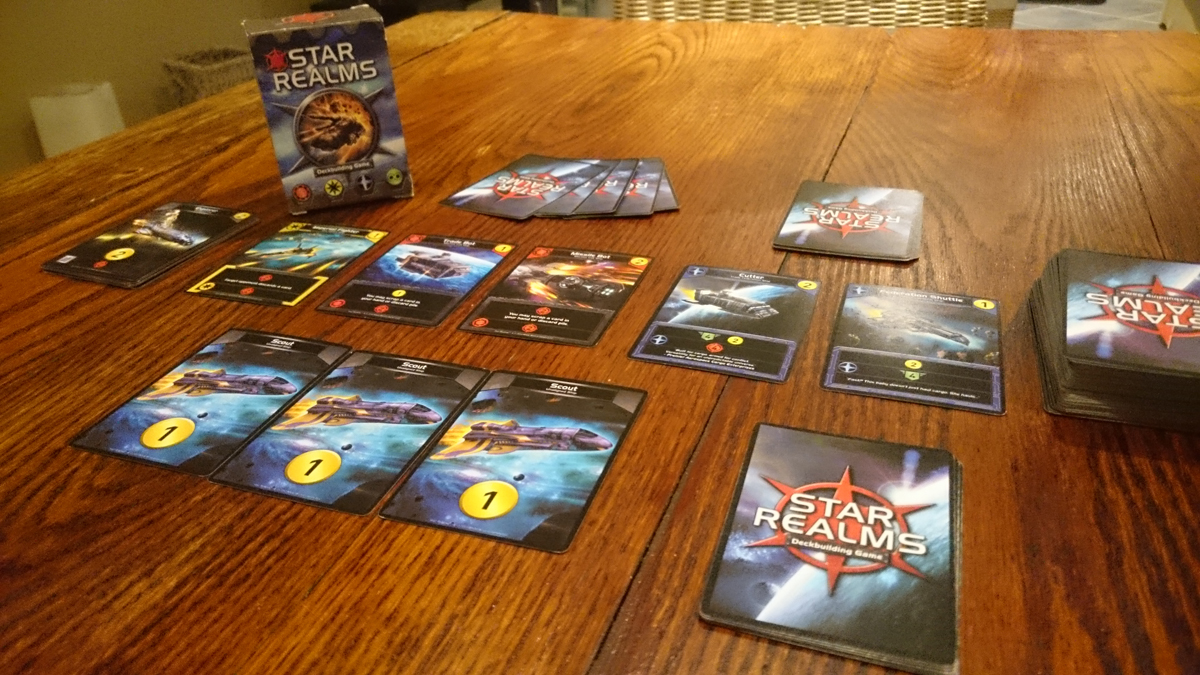 What is it? A sci-fi flavoured deckbuilder by ex-professional-Magic the Gathering players, wherein players build space fleets to out-pew-pew their opponents.

It is a period of civil war. Star Realms, striking from a hidden base, has won its first victory against the old guard of deckbuilding games.

During the battle, Star Realms has managed to cram a deckbuilding experience into a single deck containing a mere 128 cards, sacrilege!

Against this game stands such giants as Dominion, Legendary, Core Worlds and Thunderstone. Can this mini-deckbuilder stand up and be counted against its more established bretheren?

We would be honored if you would join us

In Star Realms, 4 factions from different corners of the galaxy are at war with each other. Players will build their own death-wielding space armada, recruiting ships and bases from any faction they choose, in order to decimate their opponent’s authority (health) to 0. Wait, surely a galaxy doesn’t have corners?

Players starts with the same deck of 10 weak ships not fit for any respectable nerfherder – 8 Scout cards for trading, 2 Vipers to attack. They serve as the basis for your future army, and on a player’s turn, he/she gets the chance to purchase a ship or base card from the shared trade row containing 5 cards (or purchase a basic Explorer ship). These purchased cards go to the active player’s discard pile. When a player has used all the cards from his personal deck, his discard pile will be shuffled into a brand new personal deck, now containing the purchased cards. This is how your deck grows on each turn.

There are 3 different card types in the base game deck: 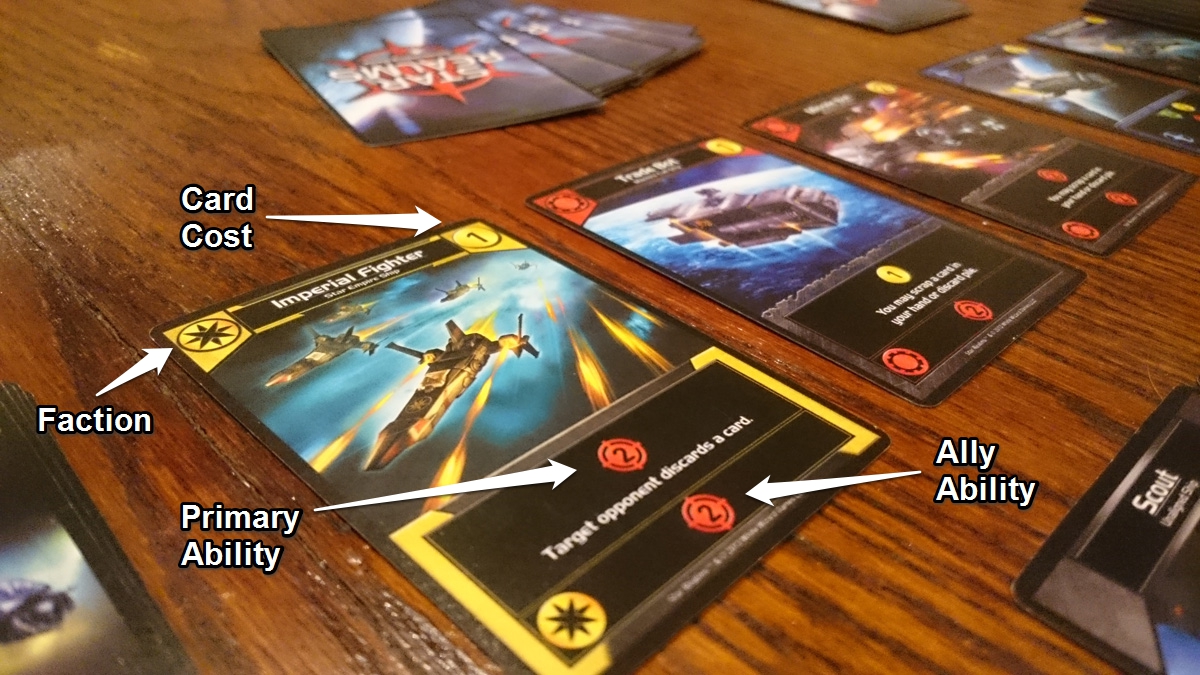 Primary Abilities happen immediately as the card is played.

Gameplay is extremely simple. On their turn a player draws 5 cards from their personal deck, and plays these cards in front of them, one by one (in an order of their choosing). On each card the primary ability is automatically triggered, an ally ability is triggered if there is another card of that faction in play, and the scrap ability may be triggered but then that card will be removed from play. The ship card abilities will grant you either of the following (or a combination of them):

Base / Outpost cards will go to the side of the active player, to remain in play until an opponent destroys them (remember Outposts need to be attacked first).

Once the cards have been played, you tally up which resources you received, and perform your relevant actions (buy cards from the trade row, inflict damage, or gain authority). The spent ship cards now go to the discard pile, the bases and outposts stay in play, and the next player starts his turn. 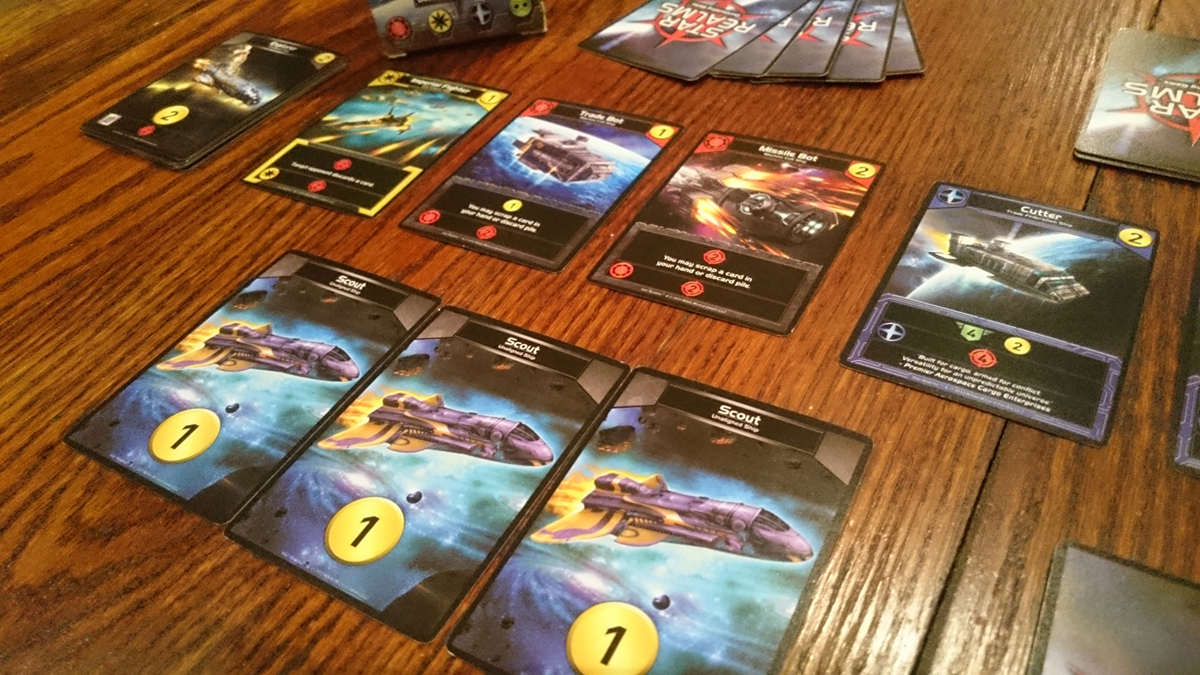 Player 1 draws 3 cards for the game’s first turn. With 3 Scouts you get 3 trade. We’re looking at buying the Cutter (Trade Federation) and the Imperial Fighter (Star Empire).

And that’s essentially it for the rules explanation, so where is the meat of this game? This is where the different factions come into play, and how you can maximise their abilities. Though there are 4 factions, you don’t want to spend the entire game recruiting cards from each one. Each has their own strengths and limitations, so the trick to Star Realms is finding the right combination for your current situation. 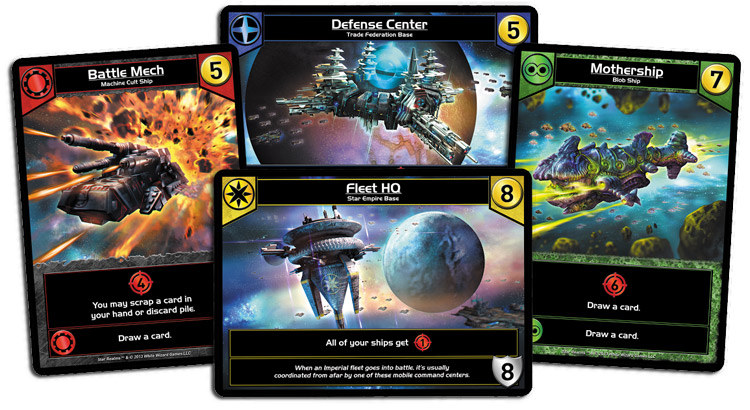 The Factions of Star Realms 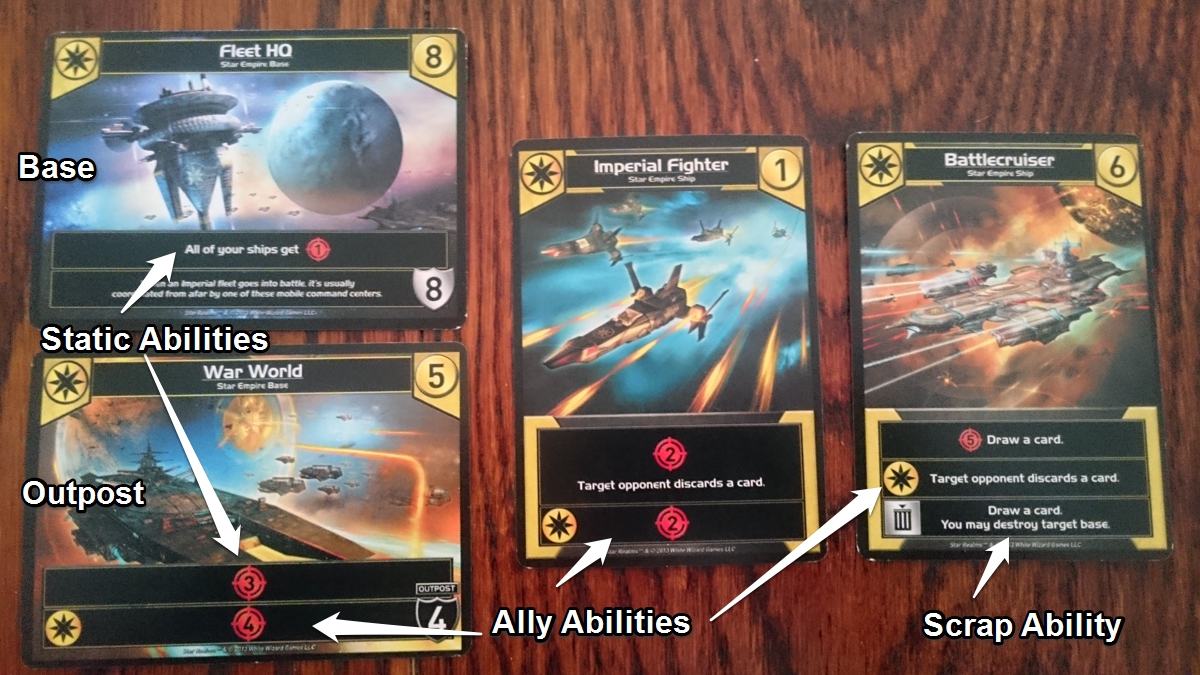 The benefits of focusing on specific factions. I have 4 Star Empire cards out, with multiple ally abilities triggering. The static abilities on the base and outpost cards automatically trigger too. We see an example of a scrap ability too – I can gain the benefits of the primary ability and the ally ability, then scrap (discard from game) the card to destroy an enemy base.

Though there are various strategies to employ, but chances are that you’ll look at buying cards from a maximum of two factions, hoping that you can get your ally abilities firing. These abilities are on certain cards, and they trigger when you have at least 1 other card in play from that same faction. If you can get multiple ally abilities firing, it creates a domino effect of devastation which is glorious to see as it all unfolds (providing you’re not on the receiving end). Also, take care in which order you play your cards, maybe you want a specific ally ability to activate first – for example, the Machine Cult Missile Mech ally ability allows you to draw a extra card – maybe there is another card that need first before playing the rest of your hand?

In my experience there is no such thing as luck

But there definitely is, as there are moments where the pace of Star Realms falters, such as when all 5 trade row cards are too expensive to purchase, so players end up buying Explorers for a few turns to gain the required trade cost. Or when you’ve decided on your faction strategy, and the cards for that specific faction seem to dry up, and you’re forced to change your strategy completely. In some games that can still work, but in Star Realms where you rely heavily on ally abilities, it can be devastating.

Now, witness the power of this fully operational battle station

That said, you can’t fault Star Realms for the value it brings as an inexpensive way to introduce new players to the deckbuilding genre. While the original granddaddy of deckbuilders, Dominion, has been replaced by a slew of better deckbuilders (thematically and mechanically), there surely isn’t a better introductory deckbuilder than Star Realms.

Remember, we have a great competition to win a Star Realms hamper worth an estimated R1000 right here.

It's fast, fun, and packs a huge amount of game into a single deck box. Definitely grab a copy if you're a fan of deckbuilders, or if you're looking to persuade your friends to play one.