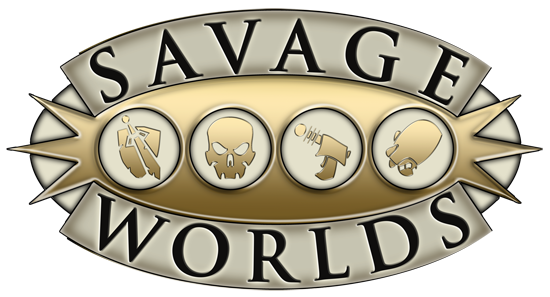 Role playing is quite a daunting concept for many gamers. Applying a loose framework and requiring creative game masters to weave a narrative world, while still allowing players the freedom to portray the character and actions they want, is a fine balance of control that can make or break this interpretive experience. Having players relate to the setting of the adventure is crucial in creating the immersive experience of role playing and, while I have devoured enough High Fantasy tales in my younger years, the embodiment of the Elf Ranger experience still eludes me. I was then introduced to the concept of Savage Worlds, an RPG system that is suited to the pulp genre settings, but appeared malleable to modern social settings as well as high fantasy, horror, westerns, space opera and crime capers. I was fascinated by the choice of combat order being decided by a set of playing cards instead of rolling a d20, your characters stronger attributes classified by dice with more sides in skill checks, and the ability to re-roll tests that you have failed through cashing in your “Benny” token with the DM, to name a few of the characteristics of this RPG system. We decided that four of us would team up on a short adventure to try surviving a night in the Savage Worlds. This is the story of our Russian mob family checking up on clan business at the Booklyn docks. This is our Moscow Connection.

Johnny woke up at the sharp flick to his ear as the armoured truck slowed to a stop in the parking lot in the Brooklyn Docks. Instinctively he flicked his switchblade in anger and then remembered where he was, with his “family”. Johnny “Remora” had been running with the Russian outfit for as long as he could remember. Hell, he’d known Alexy Petrovich longer than he had his own siblings in Queens and the Kremlin Kids had protected him more than his own flesh and blood. He’d even introduced Alexy to his kroshka, Irina, who was sitting in the front seat looking as seductive as the day they’d met her. Ivan Petrovich rounded out the crew huddled inside the Ford Tahoe and was the antagonist that roused Johnny from his slumber. He’d just come back from a stint in the Middle East and was more than a little “unhinged”, giving Johnny another equally good reason to put away the knife before he did something reckless towards Alexy’s brother.

Johnny “Remora” Mancebo – A knife slightly sharper than his tongue.

“Wake up, little man” – Ivan muttered in a thick Moscovite accent. Even though they’d been in America for over a decade, they would never pass as locals to any yanks.

“Yeah Johnny. You and Irina need to take a quick walk to look for Gennedy. It’s not like him to make me wait.”

Alexy had instructed him to meet him at the bar on 52nd and Park for collection mere hours before. As he’d gotten into the car next to Ivan, a 12 Gauge had be thrust into his hands with nary a word uttered. This was a business trip, plain and simple. Boris Petrovich, head of the family and Alexy’s father, had related to his son months earlier of a “package” that he needed to have collected from the Brooklyn Docks from an incoming freighter. Gennedy Nikolovich, Alexy’s cousin, had been working undercover as a customs officer at the harbour to ensure the smooth receipt of goods. Gennedy was to text Alexy to relay the arrival and delivery of the goods to a Russian controlled warehouse in central Queens. His phone had been silent and dark, much like the harbor lot that surrounded them.

Brooklyn docks. Silent parking lots and factories and loading facilities to the east.

Johnny opened the door silently and surveyed the parking lot as Irina joined him. She may have protested against going outside with Johnny, but knew better when Alexy was on the job. [Notice Roll by 2 players = success] Johnny and Irina held their breath. It was too quiet. No flashlights, and a complete absence of light and sound. Something was terribly wrong…

They moved cautiously towards the docks and noticed a guards hut at the end of the pier. There was a faint glow off the water from the city that allowed them to see the freighter shrouded in fog, and Johnny read “Chernobyl Mecht” which caused the lump in his throat to become engorged. Revenge and the nuclear destruction of a Ukranian City used in combination sent a chill down Johnny’s spine as he followed Irina towards the guard house and regained his composure.

[2 players rolled stealth checks =success] As Johnny snuck up behind Irina, they peered inside the guard hut and saw a slumped figure. “Old bastard fell asleep on the job” thought Johnny, “Let’s give him a bit of a scare shall we?” As he flung himself into the doorway, cocking the shotgun with a menacing mechanical crunch, he observed a complete lack of moment. And then the viscous liquid pooling at his feet. The guard was dead [notice roll by 1 player=fail], definitely a gun shot wound but nothing else clear about the circumstances. Heightening his awareness, Johnny searched the guard for identification [search roll by 1 player = success] and found just a flashlight and some dock papers for the boat. Putting a finger to his lips, Johnny pointed towards the car and Irina nodded in agreement.

“Alexy. Something is not right here. Me and your little friend found old dead security man with bullet in chest” Johnny repressed the urge to mimic her thick Russian accent, then remembered the last beating she had given him. The Petrovich brothers got out of the car to join Irina and Johnny. The stillness aboard Chernobyl’s Revenge was noticeable as the crew drew their weapons and crept silently across the parking lot to the buildings on the eastern edge of the harbour.

[notice roll by Alexy = success] As the the gang reached an alley at the corner of the factory, Alexy held up his hand in a fist and there was silence… for an instant. The calm was broken by the sound of an engine trying to turn over. Again and again. Johnny stared at Alexy, whose lip curled upward in a smirk, as he slowly cocked the mechanism of the Glock at his side. Johnny admired Alexy, for his loyalty to the family and his calm demeanour under pressure but feared him for the sadism he had seen in the actions of his leader. One brother before the other, and with Irina bringing up the rear they moved towards the whirring noise. As they saw flickering headlights at the end of the dark alley, voices and mutterings became louder and audible. Ivan [common knowledge roll = success] recognised the dialect as Farsi from his time in the Middle East and crept to the corner to scope out the commotion in the alley. 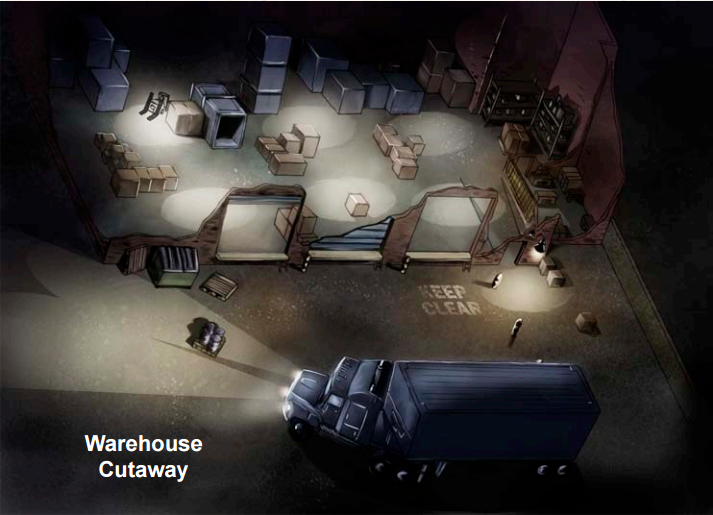 The scene near the warehouse, flickering lights.. and tempers.

Ivan peers cautiously around the corner, avoiding the lights spluttering from the headlamps of what appears to be a large 18-wheeler. 4 heavily armed Persian thugs are all peering into the raised bonnet of the truck muttering and yelling at each with what Ivan imagines are opinions of how to solve their current predicament. He had spent enough time in refugee villages with curses spat in his battalions direction to understand that the men weren’t finding success in their current activities. They kept calling “Mehmoud” and when a large AK-47 wielding Arabic soldier marched from the warehouse to join them, Ivan [Ivan roll for stealth check against Mehmoud = success] pulled back quickly to the shadows, having recognised the Red Hand General.

“Five Red Hand terrorists around truck, two in entrance to warehouse.” Johnny piped up, “Let me take a look at the other side boss, We don’t want to walk into a shitstorm.” Alexy nodded, signalling Ivan to take aim at the corner and Irina to cover the rear while handing Johnny his smartphone. Johnny crept to the corner and waited for the right moment to lurch forward in the darkness to the other side of the alley, behind some cover. He began moving, but had to leap past a tilted trashcan [roll for agility = success] just missing it and slinking into the alley below a window of the loading yard. Jumping up towards the window ledge to look inside, [roll for agility = fail] Johnny’s trajectory was off and he fell short, dropping with a thud to the ground [roll stealth = success]. But not loud enough to raise suspicions, as he heard the Red Hand soldiers continue yelling in Farsi. Johnny quickly surveyed the surroundings and hopped onto a ledge at the window, peering into the warehouse.  Gennedy with a pair of  soldier beating both sides of his equally, rocking back and forth and tied to a chair. Snapping a picture with the smartphone and texting Ivan, he couldn’t help the guilty smile crossing his face. Gennedy was such a prick. As he lowered himself to the floor of the alley, he saw a torch coming toward him from the docks and ducked quickly [stealth roll = success] to hid behind cover. A guard walked past him towards the warehouse entrance.

The engine failed all attempts to turn – a yell of surprise – shots fired. Johnny lay still…The Farsi voices grew louder and louder and closer as, with the sound of something heavy being dragged, they got closer and closer to Johnny….