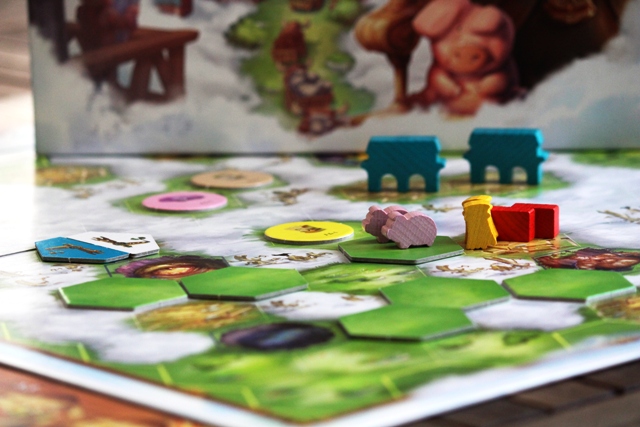 What is it? You've seen route building before. You've seen pick up and deliver before. But have you done it in a fog covered valley emerging from the mists of time? And has it ever looked this...well...colourful?

Space Cowboys are perhaps best known for the rather terrific T.I.M.E Stories series, but my first encounter with the French studio was with the game Black Fleet. It’s a light pick up and deliver style game with gorgeous art and a fun-loving sensibility, which strikes me as a distillation of what seems to be the Space Cowboys ethos – great production, wide appeal, solid gameplay. Considering that other games in their stable include Splendor and Elysium, they’ve not delivered a dud yet.

On the surface, Via Nebula looks to continue their successful formula. Delightful art, a casual allure and most importantly, a design from Martin Wallace. Yes Discworld, Age of Steam, A Few Acres of Snow, Brass – that Martin Wallace. But a pedigree and good looks do not a great boardgame make. Via Nebula will need to play quick, offer more depth than a cursory glance hints at and most importantly feel balanced at various player counts in order to attain a high rating. The question then is, does it? 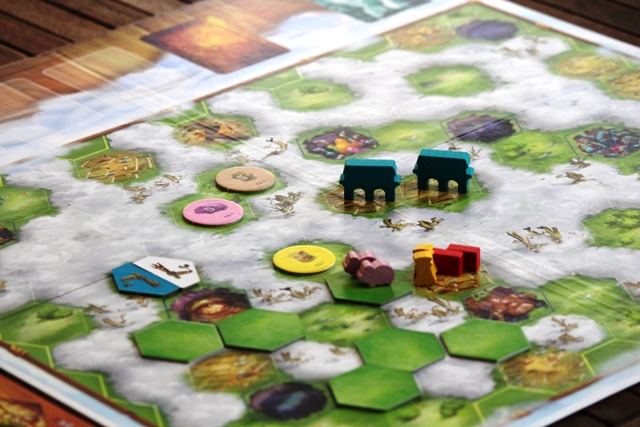 The Nebula Valley, a once thriving and prosperous region has fallen to ruin. Untouched for centuries now, the thick mist that shrouds much of its magnificence has birthed twisted creatures, the stuff of nightmares scaring off any notion of exploration. But the mists have begun to dissipate, and a brave new breed of explorer steps forth, eager to restore these ancient cities to their former glory!

One thing’s for sure, that valley sure is pretty, as is the artwork for the rest of the game. In fact, I’m hard pressed to think of a Wallace game that looks nearly as good set up on the table. It’s all just so colourful, from the adorable pink pig meeples to the player buildings that differ in both colour and shape. And the insert is excellent, not only does it store all the components snuggly, but the fact that the resource trays are actually in the same shape as the different resources shows an attentiveness in design that many of the bigger studios would do well to learn from.

The main board is double sided, with the Expert side offering a slightly more testing experience, and proof that Wallace desired the enjoyment of two players as much as that of three and four is evident in how easily the game is customised for varying player counts.

Via Nebula is a race game in a similar vein as Scythe. In fact, and it’s perhaps because Scythe is so fresh in my mind, there are definite similarities between the two. Though come to think of it, Takenoko is a stronger comparison as the end game condition is identical, as is the overall feel. Each player has five buildings, first player to build all five triggers the end game (everyone else gets one more turn) and collects 2 extra victory points. But, as with both Scythe and Takenoko, ending the game first doesn’t guarantee victory – it comes down to whomever has the most points. 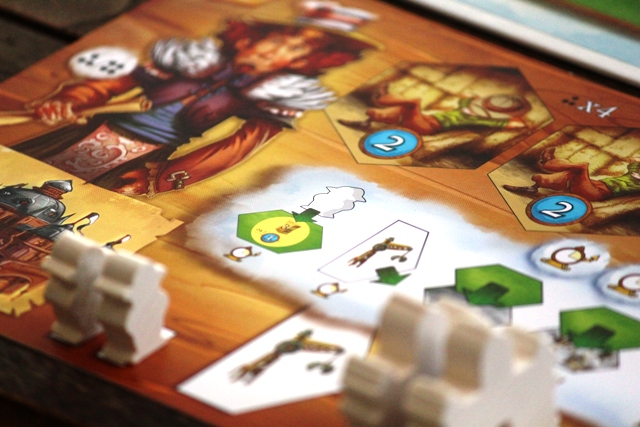 Your player mat. At the top, two stacks of Meadow tiles have been been played out, granting 4 points. A handy action summary is below.

How do you construct these buildings? Spread across the valley are a few different hex types – ruins upon which new buildings can be erected, hexes that produce different resources, and of course obstacles that prevent you from transporting resources to building site. But you are explorers of the intrepid variety, and at your disposal are six different actions, two of which you may perform on a turn (you can perform the same action twice). Transporting resources and constructing a building are obviously two of those options, but you can also explore a hex by placing a Meadow tile on a Fog space to use it as a part of a route, you can produce resources on a location by placing one of your Craftsmen on an Exploitation hex, you can claim and ready a Ruins location for building upon and you can explore a Petrified Forest space (which uses two actions).

Those Exploitation hexes each get a random Exploitation token at the start of the game, not only do they generate resources when claimed by a Craftsmen, but they are also worth victory points. As are the Contracts, which are really just a proxy card for erecting buildings that also provide a special action, such as the Distillery which rewards you with an extra action. Each Contract requires a certain combination of resources (clay, wheat, stone, wood and food) and there are always four Neutral contracts to choose from, as well as two Private contracts that are secretly dealt to each player. Once you have each of the resources a particular contract requires on one of your building sites, you can use the Build action to place one of your five building meeples and claim the contract. Any additional resources on that site not used are placed on your player board, and cost you one victory point each. 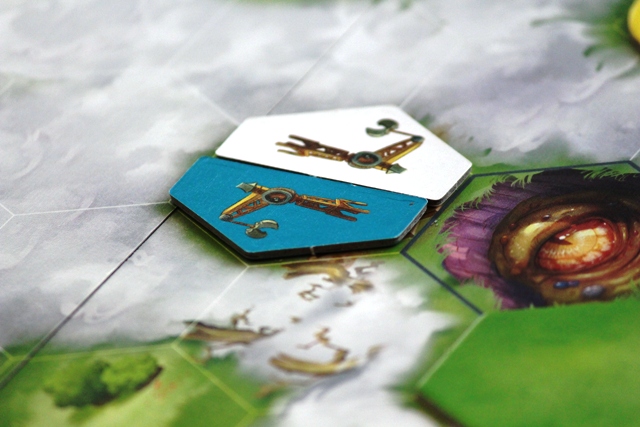 A Ruins hex with the building sites of two different players

And now you’re asking, but how would I have extra resources? Well, here’s where Via Nebula branches off from the fairly standard Euro it has up until now sounded like. First off, you can take resources from any exploitation, whether it’s occupied by your Craftsmen, your opponents, or not at all. Secondly, having those Neutral contracts available to everyone means you’d better be sure you get the right resources in time before someone else snags the one you’re looking at, or you’ll most certainly be left with extra resources. In games for three or more players, Ruin sites can accommodate two building sites. Letting your opponent use actions to open up routes to their site and then putting one of your building sites down in the same hex is a delightfully dastardly act. And most importantly, once the game is over you also take all unused resources from sites you’ve failed to build on as well as spots that contain your Craftsmen, and add those to your player board as well. If you’re not careful and if someone triggers the end game when you’re not ready, the negative points can add up quickly. 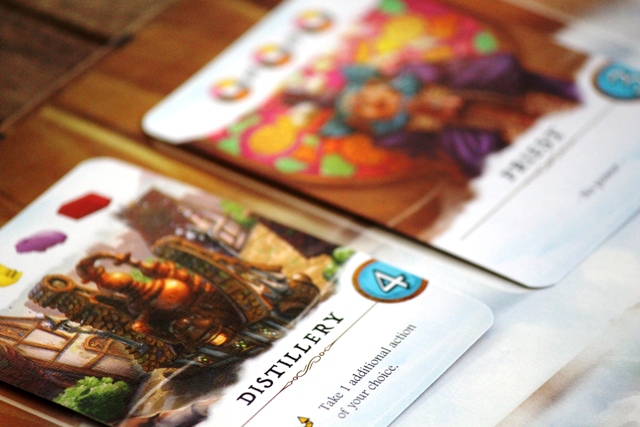 There is absolutely a distinct take-that flavour to Via Nebula. From taking resources your opponent has produced to using routes they’ve uncovered, there’s a constant balancing of performing actions that help me against those that help my opponents. Since you can only deliver resources along empty Meadow spaces, there’s even a Contract that allows you to move a Meadow tile somewhere else, effectively disrupting an opponents delivery route. It’s on the lighter end of the ‘screw your opponent over’ scale, but if you dislike having your best laid plans interfered with, Via Nebula is not for you.

I mentioned earlier that the game reminded me of Scythe, and that’s down to two major similarities, both of which are big positives for me. The select two simple actions and then next player aspect really makes the game flow, keeping downtime to a minimum and your attention constantly engaged. And like Scythe, the player who ends the game isn’t guaranteed the win. Because of the varying Contract and Exploitation token values, you could conceivably win having only placed 3 of your 5 buildings. Also, for each of the four stacks of Meadow tiles you deplete on your player board, you get 2 victory points. You could win the game by simply placing routes for everyone to use and claiming as many Exploitation tokens as possible, and that’s a facet I really appreciate. Unlike Scythe though, once the end game is triggered all other players get one extra turn. There are players who dislike the first to the finish condition, so this approach may win them over as well. 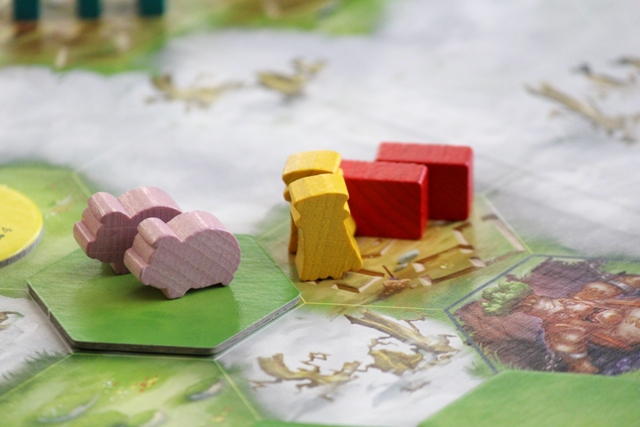 This little piggy went to market…

So what’s to love? Quite a bit actually. Via Nebula plays in around 40 minutes, but offers a surprising degree of depth. The double-sided board, random setup and varying availability of Contracts each game also provides a decent amount of replay value. The two-player version is excellent, and I really love how each game evolves from this wary early sense of cooperation to open up the board that suddenly switches into a competitive free-for-all. Via Nebula would also work extremely well as a gateway, what with it’s simple gameplay and stunning good looks, but there’s absolutely value there for the more experienced boardgamer. My only minor gripe, and it’s not really a valid gripe at all, but I’d have appreciated an included means of tracking how many actions you’ve performed on a turn. Sure, two actions should be easy to track, but if you’re playing in a busy environment or with a jovial group that distracts often, it’s very easy to forget whether you’ve done both actions or not. This is easily remedied by using a token from another game though.

I’d be remiss in not mentioning too that at first glance, and especially given the frequent use of the term exploitation, one might easily mistake Via Nebula for a game about colonization, which may give rise to comparisons with what has often been a deplorable but all too real aspect of world history. Personally I’d have gone with a different term altogether, but there is nothing within the content of the game that can rightfully be construed as misguided, so this was not an issue for me or anyone I’ve played the game with. Also as any 4X player will tell you, exploit is a defined gaming term that has a clear and separate definition.

What is accurate, is that Martin Wallace has designed a very strong addition to the increasingly impressive Space Cowboys catalogue. Via Nebula plays as good as it looks – as a middle-weight pick up and deliver game with good pacing and and strong gateway appeal, it certainly deserves your consideration.

With thanks to Solarpop for providing a review copy.

Via Nebula is a showcase for Martin Wallace's mastery of the route-finding style of board game. It doesn't offer the depth of his most classic designs, but its accessibility, player interaction and elegant simplicity not only make for a great entry point to Wallace's catalogue, but just an all around great game.