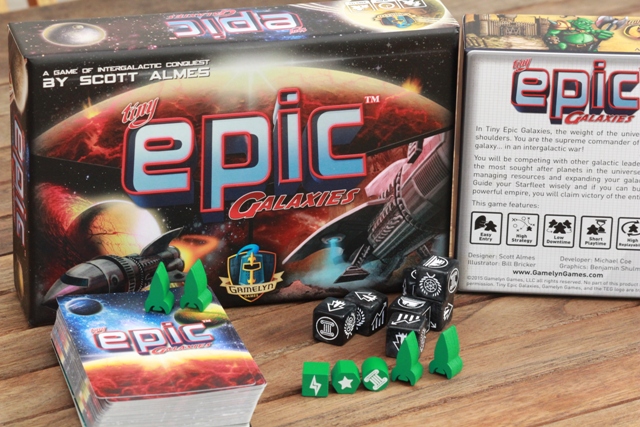 What is it? Compact boardgames are nothing new. Whether it's Backgammon or Mastermind, publishers have been punting the 'smaller but still the same' angle for decades. And understandably so given how often space (see what I did there?) is at a premium in the modern world. Enter Tiny Epic Galaxies, a design that promises the depth of a highly strategic game but with the portability of a paperback. Tiny? Sure. But I'm more concerned about the Epic.

Space is big. Really big. You just won’t believe how vastly, hugely, mind-boggling big it is. I mean, you may think it’s a long way down the chemist, but that’s just peanuts to space.

Douglas Adams understood very clearly just how vast the universe is. There’s even a site that shows you the scale of it if the moon were the size of a pixel. Which is why it’s a little strange that in a hobby for the most part obsessed with conveying how epically massive space is, a designer should step confidently forward and say, “We need to go smaller!’

And yet that’s exactly what Scott Almes did. Not content with focusing his shrinking ray upon the realm of the Medieval, Scott looked upon the endless bounds of space and thought yeah, I can tame that. One massively successful Kickstarter later, and Tiny Epic Galaxies was born. It’s clear from the box that Gamelyn Games certainly nailed the tiny aspect, but the more important question – is it any good? 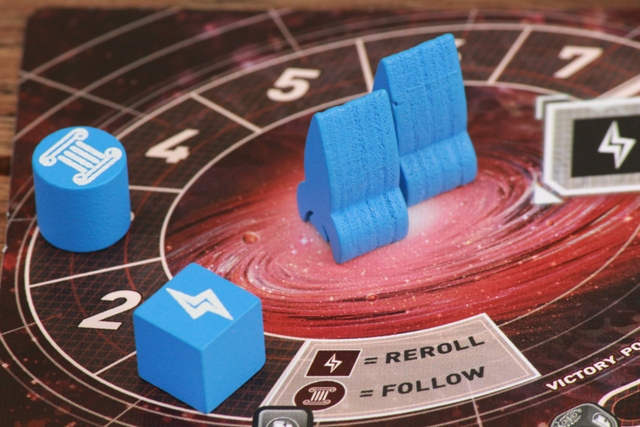 Two ships ready for launch, 3 Culture available to spend, and one Energy which would allow two rerolls (one for free)

The first sign that you’re in for something a little deeper than the box hints at, is the rulebook. It gets the job done, but for me it seemed a little at odds with how easy the game actually is to learn, probably due to the introduction of the various concepts. Because that’s Tiny Epic’s first triumph, it really is elegantly simple once the basic concepts have been grasped, but that’s not initially gleaned from the rulebook.

Your galactic empire’s growth has plateaued and if you don’t find a way to expand, your influence will quickly dwindle. But in order to achieve this you’ll need to colonize planets, which in turn will produce the necessary resources to birth an unstoppable cosmic force. At your disposal, 4 ships and limited reserves of Energy and Culture. Ships are used to settle new planets, Energy and Culture are required to upgrade your empire, but separately Energy can also be used to reroll (first reroll is always free) and Culture for Following, which I’ll get to in a moment. All of this is kept track of on your Galaxy Mat, the icons on which are simple to understand.

What constitutes a turn? Grabbing a handful of dice and chucking. But while that may be reminiscent of King of Tokyo, there’s substantially more strategy to the process of allocation. And not just which dice to allocate, but the order to allocate them in. In a nutshell (or a titanium alloy caisson if you prefer) the dice actions allow you to Launch your ships, Acquire either Culture or Energy, Advance Colonization or Utilize a colony. 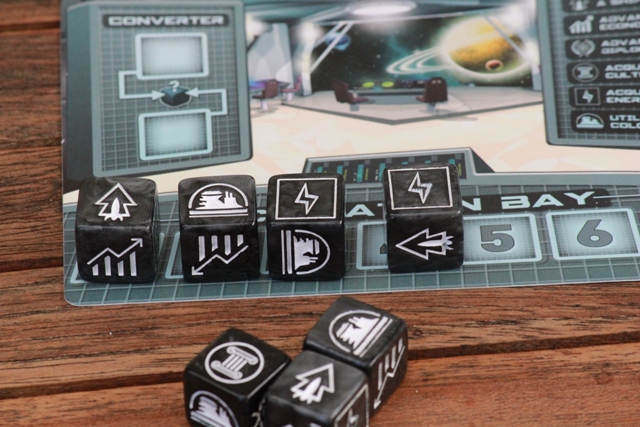 Launching allows you to move a ship from your Galaxy mat to a planet (always 2 more than the number of players available) to either begin the colonization process or to use a special action that planet allows. Each planet produces either Energy or Culture, so if you use the Acquire action you’ll gain the matching resource according to the number of ships on your mat or on a matching planet. Advance Colonization allows you to move a single ship along the colonization track of a planet (either Diplomacy or Economy) and if your ship reaches the final spot on the track, that planet is now colonized. Not only will you acquire the victory points listed on that planet, but the special action on the planet becomes an action you can perform if you Utilize a colony.

Your Galaxy mat also has an Empire track. To move along the track, you need to be able to spend the listed number of resources in conjunction with at least one Utilize a colony dice roll. So for example, to move from spot 2 to spot 3 on the track, you need to spend either 3 Energy or 3 Culture (never a combination). The benefit of moving up the track is that it allows access to additional ships, an additional die as well as additional victory points. Compared to your starting point of 2 ships, 4 dice and 0 points, if you make it to the highest rung of the Empire ladder you’ll have 4 ships, 7 dice and 8 victory points. Play goes on until someone reaches 21 points, all other players get one last turn and whoever has the most victory points is the winner. 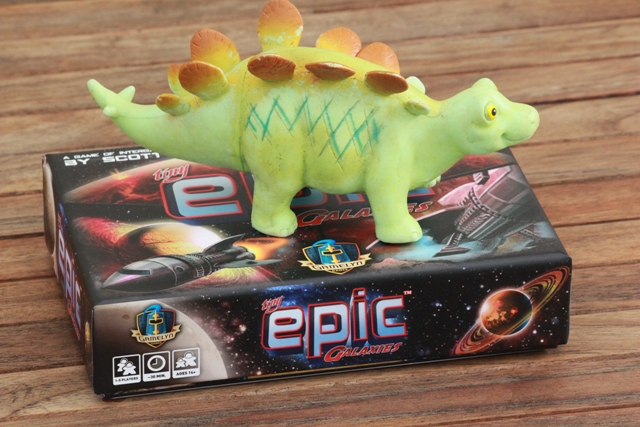 Reference dinosaur is much cooler than reference pear…

That activation order I mentioned earlier? Whenever a player rolls the dice, they place each die on the Control mat in the order the want the actions to occur. This also indicates that a choice has been locked in, so whatever rerolls a player is entitled to can only be performed on the remaining dice. Actions are taken as a die is allocated, not after all the dice have been locked in. You’ll no doubt want to launch a ship before you attempt to colonize a planet, but do you want to acquire energy before or after you launch? And do you want your opponents to gain an advantage in Following you?

Ah, the Following mechanic. Arguably the most interesting aspect of the game, and probably the most divisive. For the cost of 1 Culture point, as soon as an opponent has activated a die, you can Follow them, i.e. perform the same action. If they Advance Colonization using Diplomacy, so can you. Not only does this give you extra actions on their turn, but if used strategically can cause serious headaches for your opponent. So for instance need to move two more Diplomacy spaces on a planet to be able to colonize. But you’re also on that planet, and you’re one space away. If you have a Culture point and they use the Advance Colonization die, you’ll snag the planet before they do. Keep in mind though, your opponent can do it to you too. 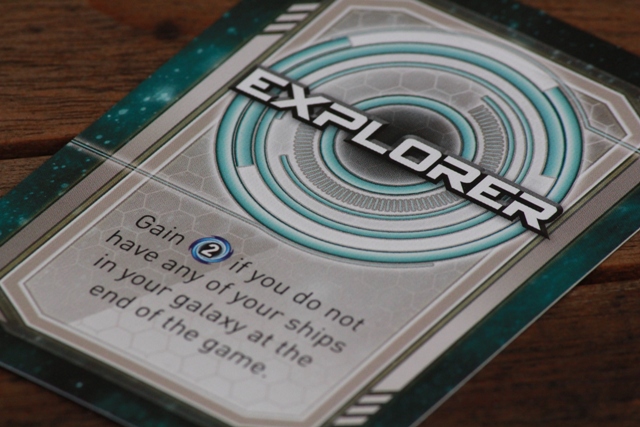 Some combos are are bad for your overall well-being, and those usually involve drive-thru windows and late night binges. But some combos are invigorating and thankfully TEG has plenty of these. It’s immensely pleasing to puzzle out a turn in which you can combine planet powers with your dice rolls, snatching up Energy and Culture and upgrading your empire to suddenly throw another dice into the pool which gives you that last launch you needed to follow it up with two Advance Colonizations and with one fell swoop you’ve just notched 12 points.

No One Can Hear You Scream

I’m not quite sure how I feel about that Following mechanic just yet. On the one hand, it ensures that downtime is almost non existent as you’ll always be paying close attention to what your opponents are doing. And sure, it does introduce another layer of strategy and allows for indirect player conflict, but I’m concerned that along with that additional layer comes a few rather less welcome layers of niggle. It’s fine at two players when only one person is ever going to be following, but TEG plays up to 5 and turns become increasingly complicated.

It’s your turn, everyone has at least 1 Culture point and they’re all staring at you, eager little alien eyes salivating at the prospect of performing a crucial Follow action. But Follows are resolved clockwise from the active player, not only are you trying to pay attention to the position of all your opponents, they’re all trying to calculate how any Follow actions might resolve. It all becomes just a little too complex in a manner that doesn’t actually add value to the experience. Given that toward the end of the game as many as 7 dice are being rolled per turn, and any number of rule-bending planet powers being activated, the timing of resolutions can become troublesome. And the solo game? I’ll pass thanks. 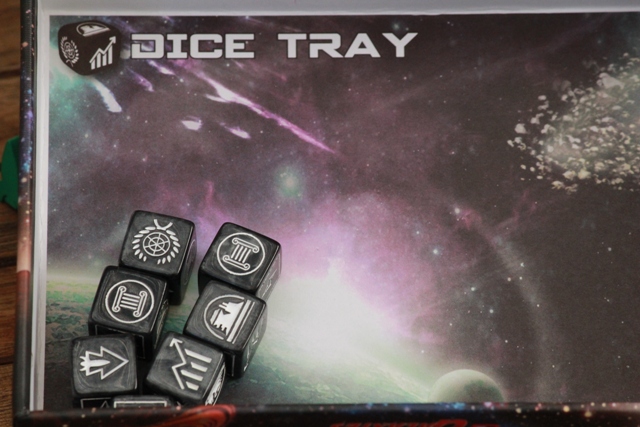 The dice tray is a nice touch

There’s a big disclaimer though, pinned like a name-tag to my somewhat awkward high school reunion negatives – I’d like TEG a whole lot more if I’d experienced it in the time referred to in boardgaming history as BRFTG, or Before Roll for the Galaxy if you’re not partial to unwieldy acronyms. It’s an important disclaimer, rather than an insidiously tiny T&Cs – I don’t excuse my subjectivity, but it’s important to acknowledge it exists. Why? Well, simply stated if I can see enough of the cleverness of TEG’s design through my bias, it speaks volumes for the objective nature of the game.

Because it is absolutely a clever little game. Decisions are never rote or easy, the deck of Planet cards provides for an excellent degree of replayability, the hidden objective cards while not powerful enough to dominate your strategy certainly inform your decisions and the options for mitigating poor dice rolls are plentiful. And the combos, oh those delightful and devious combos. I also appreciated the extra effort that went into using the box itself as both dice tray and rules reference, and the overall quality of the components and art design is certainly above average for a game of this size. 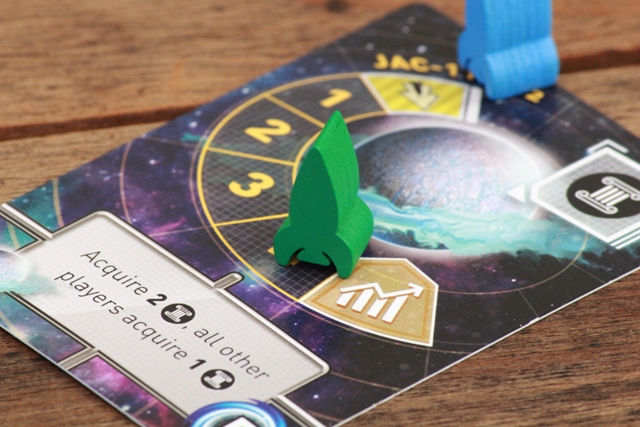 This planet’s special action is mostly harmless, but many will allow you to interfere with your opponents plans

If you’re sold on the fundamental approach of the Tiny Epic series as fillers that punch above their weight, Galaxies is an excellent addition to the lineup. Beyond the novelty though, I think that the appeal of TEG is actually antithetical to its Epic moniker – it’s not particularly epic at all but neither is it intimidating, which makes it an ideal choice for bringing new converts into the fold. I’d still rather play Roll, but at half the price Tiny Epic Galaxies is certainly worth a look.

Review Copy of Tiny Epic Galaxies was kindly provided by Boardgames.co.za for this article.

Novelty can be an important aspect in game development. Given the limited pool of mechanics, designers need to devise inventive ways of setting themselves apart from the pack. But focusing too much on novelty is in itself a tricky obstacle to navigate. Tiny Epic Galaxies achieves what it sets out to do in creating a filler style game that offers a surprising amount of depth, but I do wonder whether focusing too much on the compact nature of the game has compromised areas that could have been stronger.