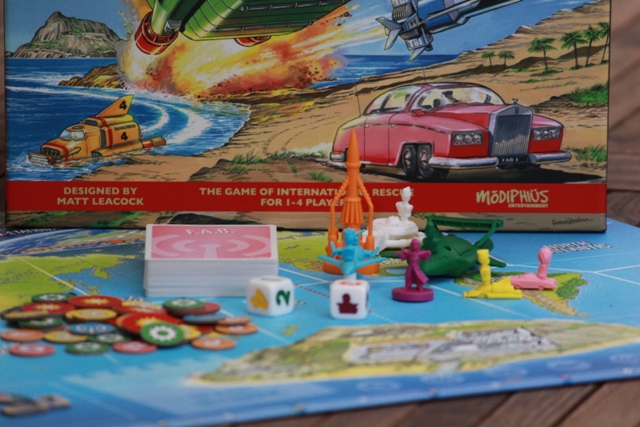 What is it? Matt Leacock is a master of the co-op, but can he bring his particular brand of schadenfreude to this much loved 1960s franchise?

I’ve developed shall we say an interesting relationship with the co-operative genre. At face value, co-operative games and I should click as well as Wade Wilson and Vanessa Carlysle – I’m not ultra-competitive, I enjoy working together as a group and I appreciate the atmosphere that’s created when a team pursues a unifying goal. And yet my history with the genre paints a different picture. Not to say that I haven’t enjoyed my experiences battling to keep viruses from ushering in Armageddon or keeping our team alive long enough to escape the undying heat of the desert or even taking on Azathoth with a tommy gun, it’s just that I end up feeling like I do about most CW series – lukewarm.

Put a slight spin on that formula though, and I’m all yours. Asymmetrical many vs one? Sold. Deck-builder co-op like the Encounter series? Any time. Actually, come to think of it, maybe I do love the genre, but it’s just Matt Leacock that has me swiping left. That’s not a dig at Matt at all, his success and the popularity of his designs is clearly no fluke. I suspect it’s likely a combination of the movement mechanics and the ‘threat track/deck’ that seem ubiquitous in many of his titles, and perhaps that his approach often seems tailored at baiting the Alpha-gamer hiding in all of us from out of the darkness.

Fast-forward to CBQ being granted the opportunity to play Thunderbirds late last year, a title that I found intriguing not only because of its nostalgic tendencies, but because the addition of vehicles and a more appealing theme just might make me a believer. But at the same time, would I be able to suspend my bias? Would I be able to give the game a fair chance to win me over? 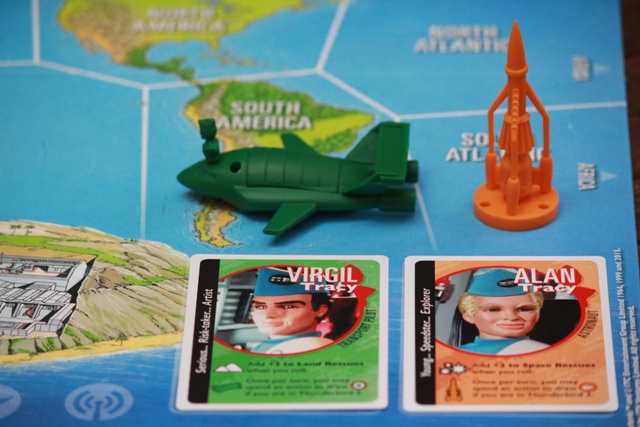 The heart of the boardgame is true to the heart of the original 60s tv show upon which it is based – as members of International Rescue you have at your disposal a number of technologically advanced craft to aid you in keeping humanity safe and thwarting the evil machinations of the Hood. Except in this case, instead of using dark magic from a temple in the Malaysian jungle to telepathically control the Tracies’ manservant, you’re moving a little purple miniature along the turn track. If it reaches a Scheme card before your team are able to foil it, everyone loses.

And if it isn’t Scheme cards, it’s Disasters. And hoo boy are there a lot of disasters. Like, you thought things looked bad in 2016? We’re talking Moon Mine Menaces and Attacks from Aligators and Zombites and Desperate Intruders. If you wanted to become a member of the Thunderbirds to see places, you made a smart decision – the jet setting around the globe is relentless. Fortunately you have at your disposal a hypersonic rocket plane, a supersonic carrier aircraft, a single-stage-to-orbit spacecraft, a submersible and a space station. And if you can’t save the world with that sort of fleet, the hero business is better off without you.

Foiling schemes and stopping disasters in their tracks should be a walk in the park then, surely? Schemes are defeated by meeting the conditions listed which generally require bonus tokens to be present in certain locations, as well as ensuring that your vehicles are in the right area of the world. They range in difficulty from 1 to 5, although every setup will always include three of them. This allows players to tweak the difficulty level, though I can attest to the fact that Standard difficulty is already fairly challenging. Prevent all three Schemes from taking place and you and your team will have humanities gratitude. Until the Hood strikes again, that is. 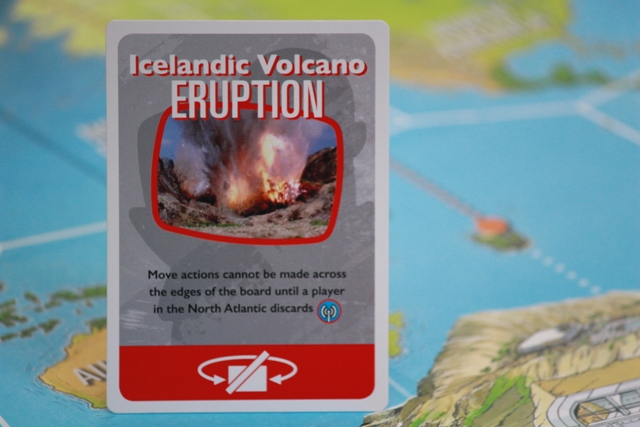 Disasters are managed at the bottom of the board along the Disaster track. After each player’s turn, unsolved disasters move further along and if a disaster ever reaches the end of the track, game over. As if that wasn’t bad enough, the deck also contains a few Hood Advances cards which automatically move him further along the scheme track. How are disasters averted? Some can be stopped in similar ways to the Schemes, but for the most part it’s a case of roll 2 dice and match or exceed the difficulty number.

Bonuses can be obtained by having the right character or right vehicle involved in the rescue attempt, but this wouldn’t be a Leacock game if the dice didn’t have a nasty side. And in this case it may just be on one side, but that side has a Hood symbol which, you guessed it, moves the Hood further along the scheme track.

Leacock isn’t a masochist though and has included the wonderfully named F.A.B. deck (Federal Agents Bureau). These cards all have helpful abilities such as adding to your die roll or providing extra actions. Psych! Taking a FAB card moves the Hood along the track. Oh Leacock, what childhood trauma led you to this path of malice?

So that’s it really, players have three actions they can use to travel around the map, roll dice to attempt a rescue, take FAB cards or scan to move a disaster card back a slot. You’re all planning who to send where, which disasters are potentially more calamitous and attempting to walk the tightrope over the chasm of risk/reward. You can augment your basic actions with free ones such as loading or unloading vehicles, transferring characters between vehicles or using bonus token, but the crux of the game truly is the discussion that takes place before each turn. Sure, it’s technically your turn and you can do anything within the framework of the rules, but practically it boils down to turn-by-committee. Anything else is guaranteed failure. 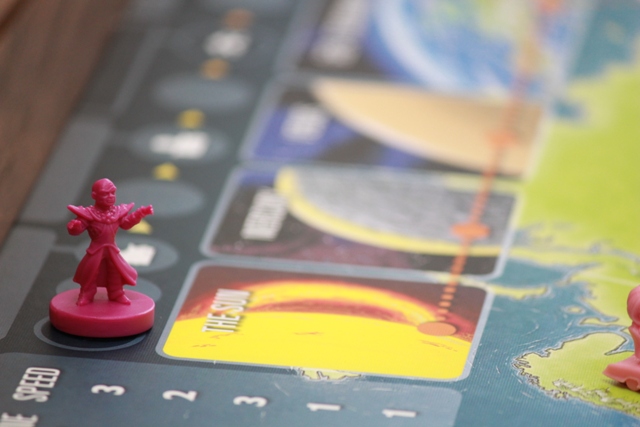 Awwww, look at the cute li’l…wait, that’s the villain?

Theme is a curious beast. For some, theme is more than sufficient to elevate the mundane to the spectacular, where for others there is no theme strong enough to conceal the cracks of poor design. Ideally the two should work together, the Legendary Encounters series being a prime example. It’s a design strong enough enough to support a variety of themes, but the thematic richness adds a tremendous value to the design. So where does Thunderbirds fall on that scale?

There’s no denying the theme has been laudably implemented and if you’re a fan of the series, you’ll be well pleased. The cards all feature stills from the original series, and the attention to detail extends to the disaster cards featuring stills from their matching episodes. The minis will bring a smile to the face and all set-up, the game is charming in a retro way. But that’s really where the appeal is, the theme. The design and mechanics are competent enough, but the difference between loving the Thunderbirds and simply recollecting their existence is pretty much the difference between enjoying the game and having little interest in ever playing it again.

I’d certainly be doing Leacock a disservice by characterising the game as ‘bad’ – it absolutely isn’t, and those familiar with the tension and sense of ‘against all odds’ that Pandemic has fine tuned so well will appreciate the constant uncertainty. Thunderbirds is like a Bondian deathtrap, but not one of these slick and modern shameful attempts; we’re talking piranhas in the water and sharks with frikken’ lasers. 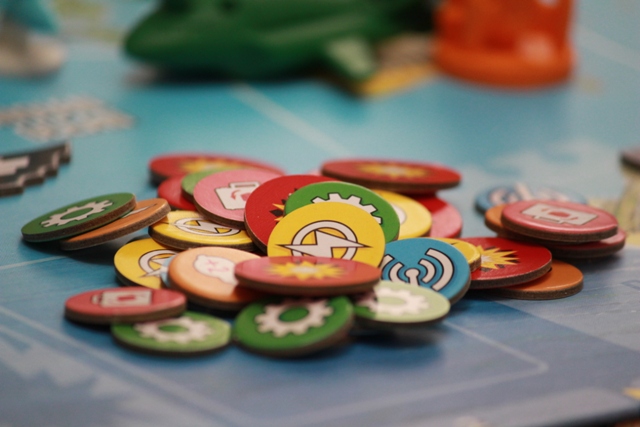 And I mean that in a genuinely affectionate manner – this isn’t attempting to prevent a nightmarish flesh-eating bacteria from killing everyone you love, it’s stopping the Hood from launching a Doomsday missile from his secret base in Table Mountain. When you’re busy loading Lady Penelope’s pink modified Rolls Royce into Thunderbird 2 so you can get to Bolivia in time to prepare a crash site for Salt Bed Splashdown, one of two things will transpire. Either you’ll ride the wave of giddy nostalgia, or you’ll push that little pink Rolls across the map to South America and roll a dice. The former means you’ll be making mechanical noises with your mouth as FAB 1 is loaded into Thunderbird 2 and you whoosh across the ocean. The latter is more akin to checking your Facebook status between turns.

Unfortunately, Thunderbirds as a theme holds little value for me. I’m not a fan of the series beyond experiencing the slight twinge of nostalgia that accompanies hearing the opening music and without that hook to hold my interest, the game’s flaws become a point of fixation. To its credit, there’s not a lot that I could outright label a flaw instead of simply a matter of personal preference, but they exist nonetheless. The randomness of the dice seems like an addition that was made so that the game could make use of additional cards and tokens – Pandemic does such a great job of limiting the random elements to the games unfolding world, and yet giving players a degree of certainty that they can rely on their actions, so it’s a strange branching path that Leacock takes here. Sure there’s plenty of content to mitigate poor dice rolls, but I question their presence to begin with. 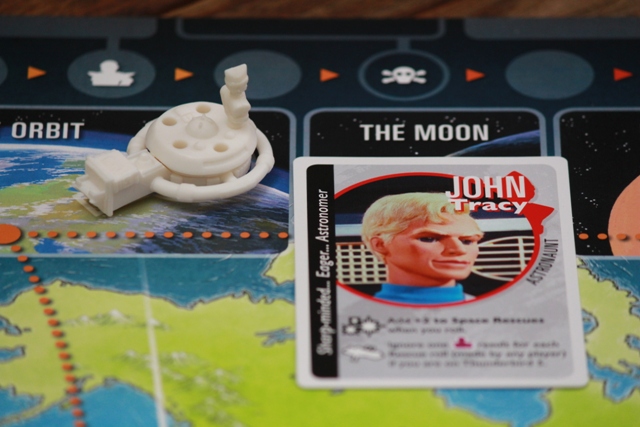 If you believe, they put a man on the Moon…

Thunderbirds is also conducive to creating an alpha-player, as many co-ops unfortunately are. Which makes me question whether the gaming family are meant to be one of the demographics the game is geared toward? I’m not a big fan of the notion of guiding your kids action – they should feel they have the space to make their own decisions – but can you imagine experiencing that as an adult? Lastly, and it’s a criticism I have of Pandemic as well, certain player roles are just not as exciting as others. Yes John Tracy, I’m talking about you. Still, you’re only ever using 4 of the 6 characters, so simply leaving John permanently in the box isn’t much of an issue. Poor John – exiled to space, exiled to cardboard box.

In an era when the most popular fictional heroes include figures such as Thor and Batman, the Thunderbirds are very much a relic from a different time. The modern hero is all about idiosyncrasy, so it’s refreshing to witness the Tracy family in all their homogeneous glory just setting about keeping the earth safe. There’s a reason the first things you see in the Thunderbirds opening is the vehicles, and that focus on the means of saving the world and not who is actually doing the saving. And this translates to the gameplay where the Tracies all play second fiddle to the mighty Thunderbirds 1 through 5.

If only I could hear the roaring of engines in my head or the explosion of propulsive flame, perhaps the passion that has kept this franchise afloat for 50 years may have cast a spell on me. But alas, the Hood’s defeat brought only silence.

Review Copy of Thunderbirds was kindly provided by Boardgames.co.za for this article.

Thinking of firing up this Thunderbird? Check under the Hood first. If you feel like an honorary member of the Tracy family, you'll probably love your time with the game. As for me, I'm afraid I have no strings attached.