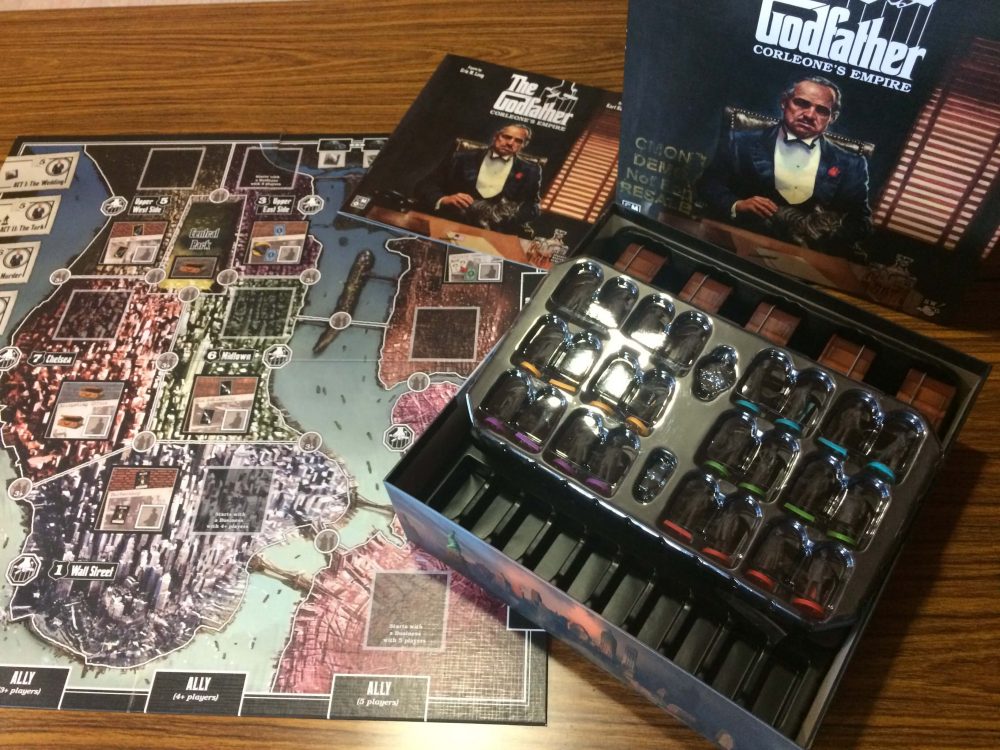 What is it? Running a empire of crime means you have to deal with every aspect happening in your city, making sure you're getting your piece of the action. There's a lot of cannoli, alcohol, pieces you need to gather to make sure you come on top, but do you want to shake everything down all the time? We find out in The Godfather: Corleone's Empire

I’d heard murmurings about “Project Suitcase” since around Origins 2016 when US board gaming media creators got to play a prototype of Eric Lang’s. Described as “really something special”, it was revealed to be a mobster themed game, well THE mobster themed game and I was immediately excited to experience my first play through. My fascination with mobster lifestyle is not about the violence, nor the decadence of their lives in what was a very turbulent time of economic depression. I always admired the control that these families had, the despotic reign that had the veneer of “earned loyalty” and how respect was something admired over the ignorance of fear. In a game of families vying for the control of New York, how much of this theme could be incorporated into the gameplay mechanics? This designer has produced some of the best area control games in recent year, could this become the mobster game that people would want to play?

In The Godfather: Corleone’s Empire, each player takes control of one of the five prominent organised crime families in New York. Don Corleone has fallen ill and you realise that in the imminent chaos there is an opportunity for you and yours to seize power from the inevitable vacuum of his death. Money is the true meter of control, so through the five acts (each relating to the first Godfather movie) players will need to send their family members to occupy territories and shake down store fronts for blood money, guns and alcohol, whilst sneaking the odd buck here and there to inflate the family coffers. Amass the right assets to pull off jobs that will earn you large stores of cash, the respect of your peers and even shed some of your enemies blood across the streets of New York. 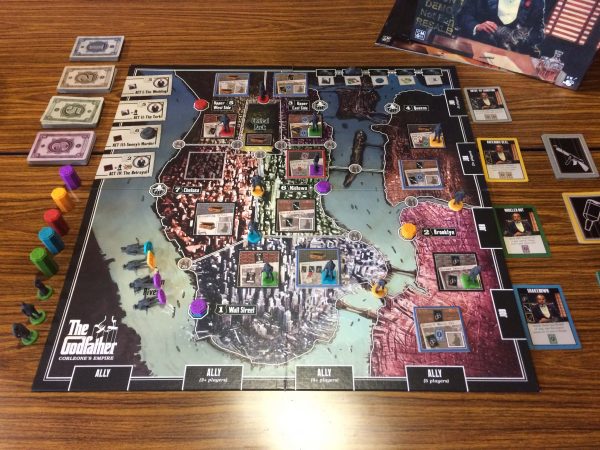 In each of the 5 acts, players will have a certain amount of thugs and family members available to them. On your turn you’ll be able to place your pieces on spaces on the board and gain the benefit of that space, complete a job by paying for the resources or play an Ally that you have recruited during the game. Each location on the board has two different resource yields, one that is generated when thugs are placed directly at the location to shake it down and the other for when family members are placed on regional space on the board, allowing them to gain resources from multiple locations considered to be within that family members control. As expected thematically, a location will yield a bigger reward when thugs are banging on your front door than when a family member is in the area and the location feels that it should just pay respects. These locations will give your family resources in the form of alcohol, blood money and guns (drugs in later acts) and actions, such as the ability to bank money from your hand into your suitcase and the option of drawing more job cards. Money in your suitcase is critical for victory at the end of the game as those cards don’t count towards hand size and you’ll need banked money to bribe allies to your cause during the game.

Placement of thugs and family not only gets you immediate resources, but also stakes your claim to a certain area of New York as players attempt to establish turf. At the end of every round, each family that has a clear majority of figures in a region will be able to place a territory control marker in that district with ties having no markers placed. Not only will this marker count towards the sum needed at the end of the game for victory points for controlling that area, but also for the next round whenever a business is shaken down by any family’s Thugs in your region, you will receive the lesser bonus for that business as well as your slice of the action, making controlling the streets of New York crucial to success. 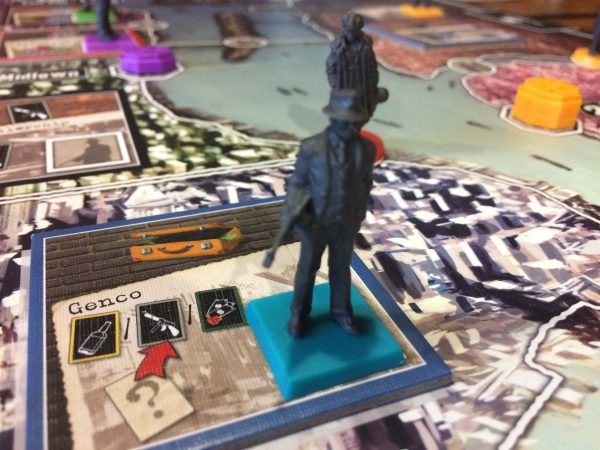 Completing jobs is crucial to your success in controlling the regions, as spending your resources will grant you larger cash rewards than you would gain for shaking down businesses and also grant special actions that can swing the turf war in your favour. “Take the Cannoli” allows you to gun down enemy family members in certain regions across the board to possibly prevent them from establishing control over regions at the end of the act, or to free up a crucial space for one of your workers to occupy, while other jobs will allow you to reclaim workers to place them again for more resource gains in a single act. Completed job cards also will be placed inside your suitcase, and the player with the most completed job of a certain type (they are colour coded) at the end of the game will score additional bonus points. 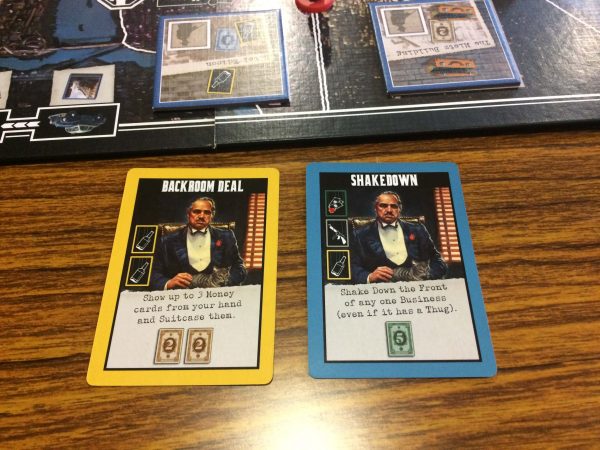 Allies can be recruited in between acts in a blind auction, usually corrupt city officials keen to line their pockets with mob money.  Players will blindly bid with money from their suitcases, with the winner having first choice of the officials to pay off and get their Ally card to play in future rounds. The player who offered the next highest bribe will then chose their ally to recruit until the allies are all gone, with there always being one less ally available then number of players. 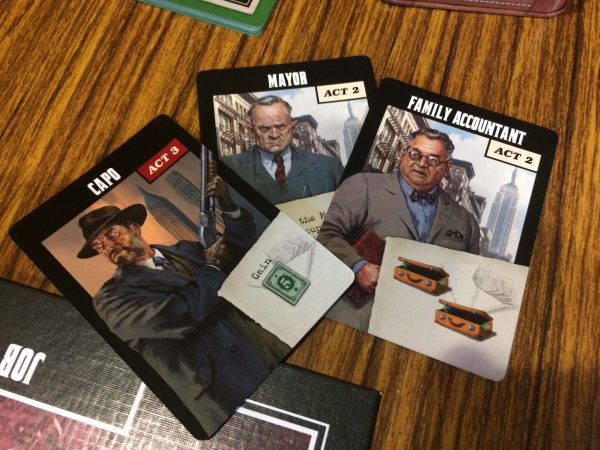 Rounds end when no family has any more figures to place on the board, with players ending their actions for the round whenever they place their last figure.

At the end of each round (Act), players will need to pay their respects to Don Corleone who allows you to keep a portion of your takings, but any excess cards from the limit set at the end of the round must be given in tribute to the Don. This limit is on ALL cards not in your suitcase, including Job cards, resources, allies and precious cash.

At the end of the 5 Acts, players will total the cash in their briefcase and score end game bonuses for the number of areas they have controlled over the game and additional points for having the majority of certain types of finished jobs. No surprise, whoever stamped their foot hardest on the underbelly of New York will be crowned the new Don. 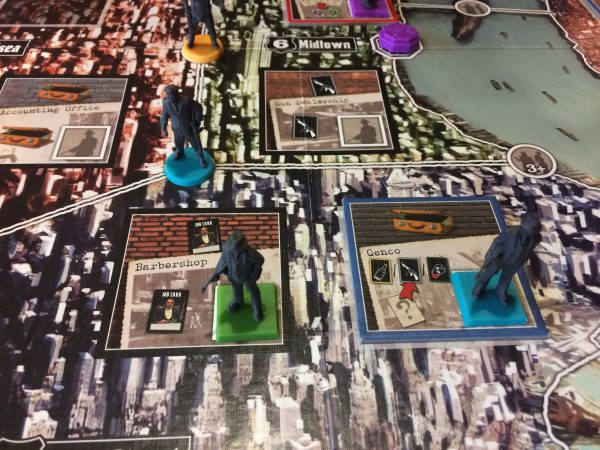 The Godfather: Corleone’s Empire is, much like the families attempting to wrestle control from the fist of the Marlon Brando, one of the most ambitious and complex blends of different game types that aren’t always apparent from looking at the surface. On one level, it’s a worker placement game where you’re shakedown the best locations to form an engine of resources and money laundering, which is crucial to get money in the bank. On a separate layer, it’s got excellent area control mechanics that sway back and forth with family members being killed, moved and last minute turf wars erupting to change long term control ambitions as well as short term influence benefits of receiving rewards for the next round. Timing is crucial in each round, as placing thugs down on the board early will net you the most desired resources, but also telegraph control ambitions to other players who may then choose to send your figure to the fish hotel for the night. Also, playing all your characters ends your actions, but you don’t want to play your jobs and allies too early when they might not be as effective as they could be.

Then there is the hand management aspect of getting money into your briefcase, while balancing and saving job cards and the resources you’ll need to send out your goons to blow up every Sonofabich in downtown Manhattan with a car bomb. High resource cost jobs can shift the turf war but also mean you’ll need to save up for a big job rather than ticking over smaller jobs that might snag you overall control at game’s end. Mix in a 5th of a simultaneous bidding mechanic at the end of each round and you have a lot to keep track of, and a wealth of combos that can leave competing families reeling for your scraps. 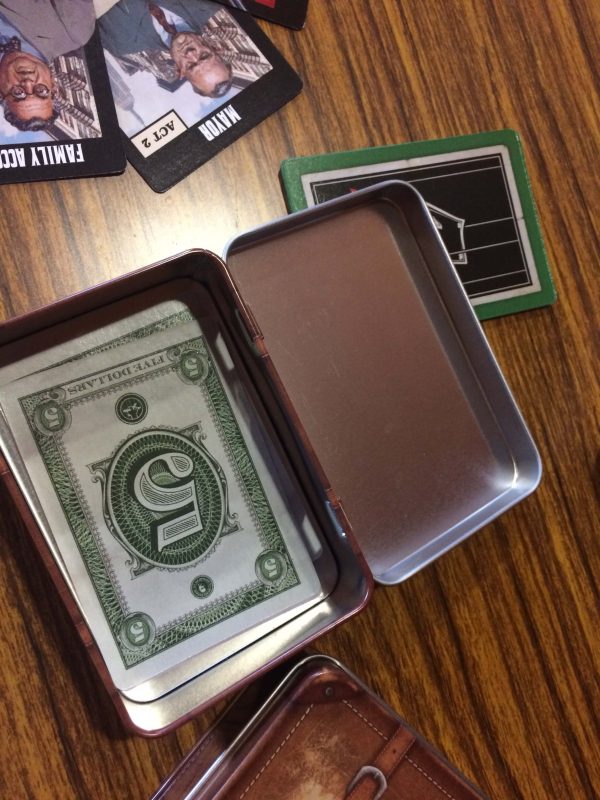 The art of this CMON title is something special in almost every case. In one secret love letter, the character art of Karl Kopinski is amazing, from the different allies, the art in the rule book and the board itself are beautifully evocative of an era gone by. No CMON game is complete without beautiful sculpted minis, and each family has unique models which showcase the different characters from mobster tropes and look gorgeous on the table. Sadly the card stock isn’t great and the job cards are particularly boring, with action text and coloured borders being different, but all of them sporting the same image of Marlon Brando. Why we didn’t have images of car bombs exploding, shooting mobsters with Tommy guns or anything else seems like a missed opportunity.

I really, really enjoyed my playthroughs of the Godfather Corleone’s Empire, but personally it’s an offer I’m going to refuse. While it’s an intricate hybrid of so many different gameplay mechanics that I love, it isn’t the revolutionary mobster game I was hoping for, but that’s because I have better games that I already love that do each of those elements better in my opinion. If I want to play a tight area control combat game, I have Kemet with its giant scorpions and excellent battle mechanic and control objectives. If I want worker placement game, I’m going to bring out Viticulture which has more purposeful planning of worker combinations yielding long term strategies that the chaotic Godfather lacks. What I found myself wanting was the Godfather to champion itself in some way with some mechanic and it simply became a hybrid of too many parts for me. 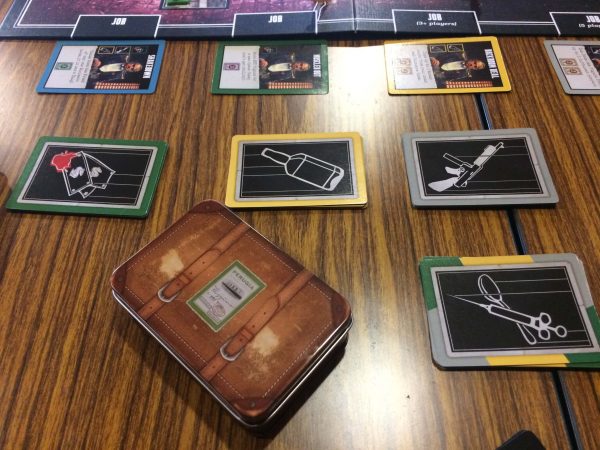 However the Godfather: Corleone’s Empire is recommended for a lot of boardgamers who are looking for that game that gives them a taste of everything, the gamer who doesn’t have large established collections like some of us have. It adds all the right levels of spice, the game balances on the edge of so many different mechanisms that touch on everything making it a really great mix of board gaming elements to make a solid title. So you should all go to your board game store or go your friends house and taste the Cannoli before you order it for the main course for the day of your daughter’s wedding. It might be the game that becomes the one of the centre points in your collection, but sadly its not the one for me. 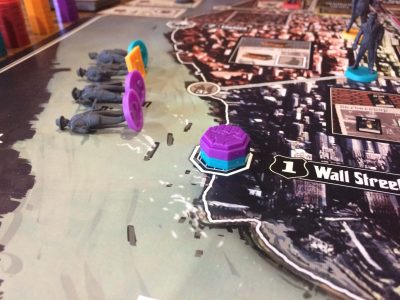 There is a lot to love about the The Godfather Corleone's Empire and if you're looking for an area control worker placement game and dont have many in your collection or LOVE the mobster theme, this is the game to get. However I just feel that its an offer I can refuse with better worker placement and area control games in my collection.