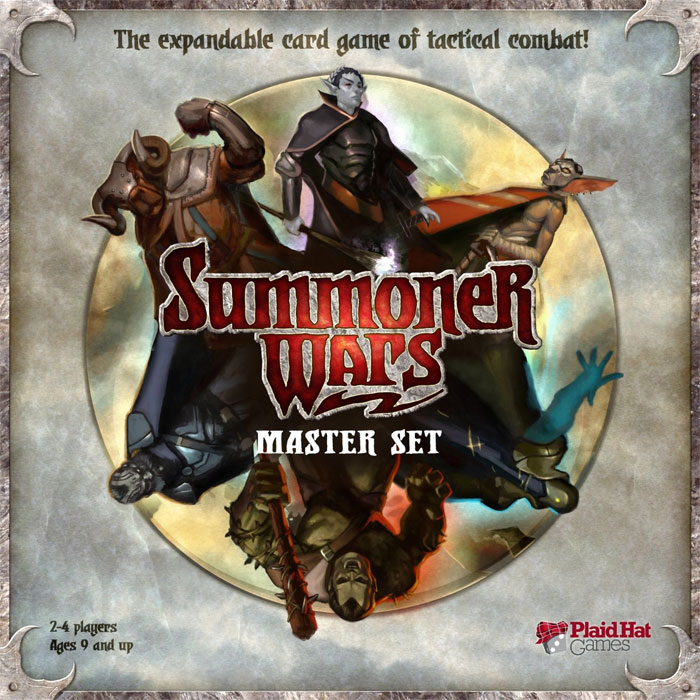 What is it? The game that started Plaid Hat, Summoner Wars is an entry level "miniatures" game of head to head fantasy battles. With elements of Chess, Magic the Gathering and Richard Borg's Command and Colours, does this game deserve all the love from fans that it gets? Is it the two player war game that you should have in your collection?

Strategic head-to-head games have been a part of our history for centuries and often the test of true leadership in military circles. Chess has had great players sit opposite each other and maneuver representations of warriors along battlefields of grids back and forth with absolute certainty of their movements and instance victories. However true leaders realise that the only absolute in battle is blood. In this particular strategy board game, the rolls of the dice and careful manipulation of the battlefield and your armies, one of you will reign supreme after the dust settles. 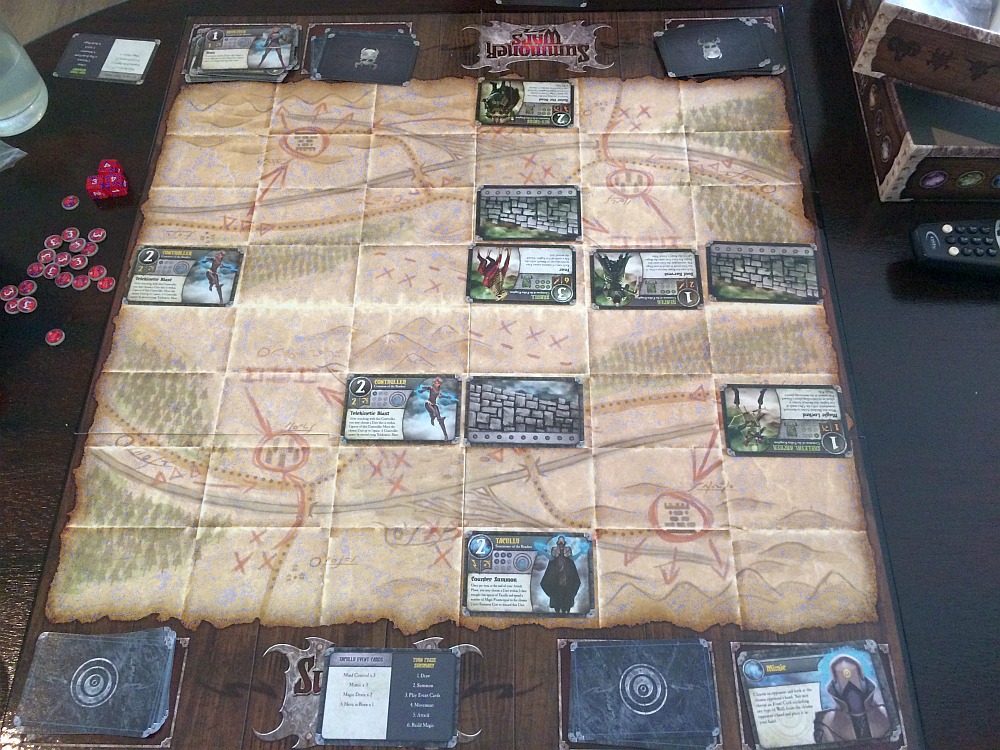 The Fallen Undead versus the Powerful Psychomancy of the Benders

In Summoner Wars, players will each control a specific faction on a hex grid battlefield with the end goal of killing the opposing Summoner. While appearing to be a miniatures game, similar to light war games such as Battelore and Memoir 44, it differentiates itself by using a deck drawing mechanic, similar to Magic the Gathering with the cards representing the units on the board. At the start of the game, each faction will have a specific starting setup including common units, a single wall and a summoner, which in chess terms is equivalent to your King. In alternating turns, players will be able to draw up to a hand of 5 cards, summon new units to the battlefield, play event cards, move units, attack with units and finally build up magic reserves for summoning units in later turns.

After drawing up to a hand of 5 cards, players summon units by paying the magic cost with cards that they have built up in their magic pile and placing them on the battlefield adjacent to a wall that they control. Each card that is in their magic pile is worth 1 unit of magic and moving that number of cards from the magic pile to the discard pile signifies the summoning of a unit. increasing the size of your magic pile can be done by killing enemy units in combat (or killing your own), by specific events or during the build magic phase. After summoning phase, players can play any event cards that are in their hand (including placing walls) to buff their own troops or wreck havoc upon their enemies. Players can then move up to three different units up to 2 spaces once and in the following phase, attack with three separate units one time each. Ranged units can attack enemies in clear straight lines up to two spaces away and melee units can only attack adjacent units. Evaluating the damage is done by the attacking player rolling the number of six-sided dice equivalent to the attack strength of a unit. On a three or higher, a roll is counted as a hit. If enemy units are killed, the victor places the fallen unit on his magic pile. After all attacks have been concluded, players are allowed to discard cards into their magic pile to be used for summoning more units in their next turn. Play alternates back and forth until one summoner is reduced to zero health and vanquished. 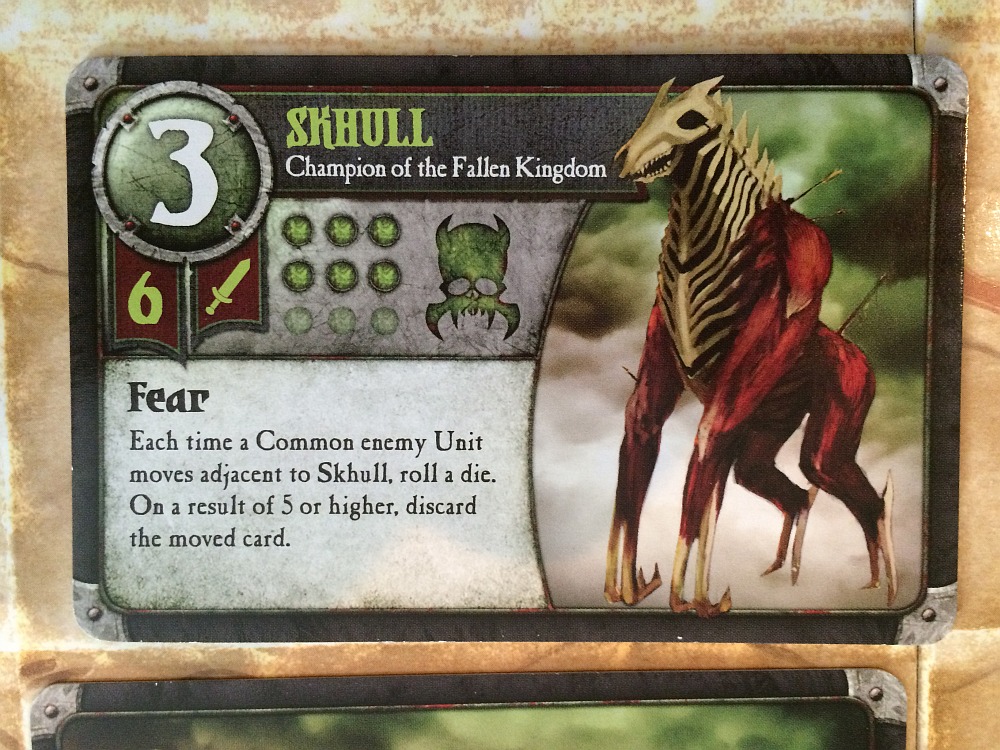 A Champion of the Fallen, with 3 attack die, 6 health and the ability to cause adjacent enemies to flee!

What elevates Summoner Wars from other similar games is its streamlined design through mechanics and beautifully constructed factions with their unique gameplay elements and strategies. While all armies move and attack in similar fashions, each faction and unit within the faction has an ability that makes minor changes to the elements of the game. To illustrate; The Mountain Vargath (A faction army of militaristic humanoid goats that resemble minotaurs) thrive on organised attack formations and close knit aggressive maneuvers. Rushers (Common Unit) are allowed to move additional spaces should that begin their movement from your side of the grid board and Warriors (Common Unit) get an attack bonus when they are on the opponents side of the board. In addition to this, ALL common units get an attack bonus when they are within 2 spaces of the Summoner, making it crucial to make him part of your attack force. In stark contrast, Shadow Elves are nimble and need to strike their enemies from the shadows in guerrilla type warfare. Scouts (Common Unit)can be summoned for free and if they are on the opponents side of the battlefield they allow the player to move an additional unit every turn. Shadow Elf Rangers get to teleport to location of enemies they have slain that turn and attack an additional time! Each Summoner has unique events that shape the battle such as draining magic from opponents, assassinating units with spells or even taking control of their units. Each deck also comprises of three Champion units that are expensive to summon but can radically swing the tide of battle.  Just by contrasting these factions, of a possible 16, you can understand the depth of strategy available to players.

In initial releases, Plaid Hat Games offered starter sets, providing players with well balanced opposition factions that offered massive depth of strategies in a single box at a affordable entry level price. These were expanded with individual add on packs of reinforcements to provide deck building options for seasoned players and brand new individual faction packs provided entirely new armies, expanding the strategic options. Currently there are 16 factions that each have a unique play style that makes them deadly in the hands of seasoned summoner. The streamlined mechanics make players think strategically, as once the initial deck of 34 cards has been exhausted, players need to conclude the battle with what they have on the battlefield. While some may argue that the dice mechanic adds too much random chance to the game, I’d argue that nothing is certain in war, and an educated summoner compensates for this through strategic planning to ensure his plans have a likely chance of coming to fruition. 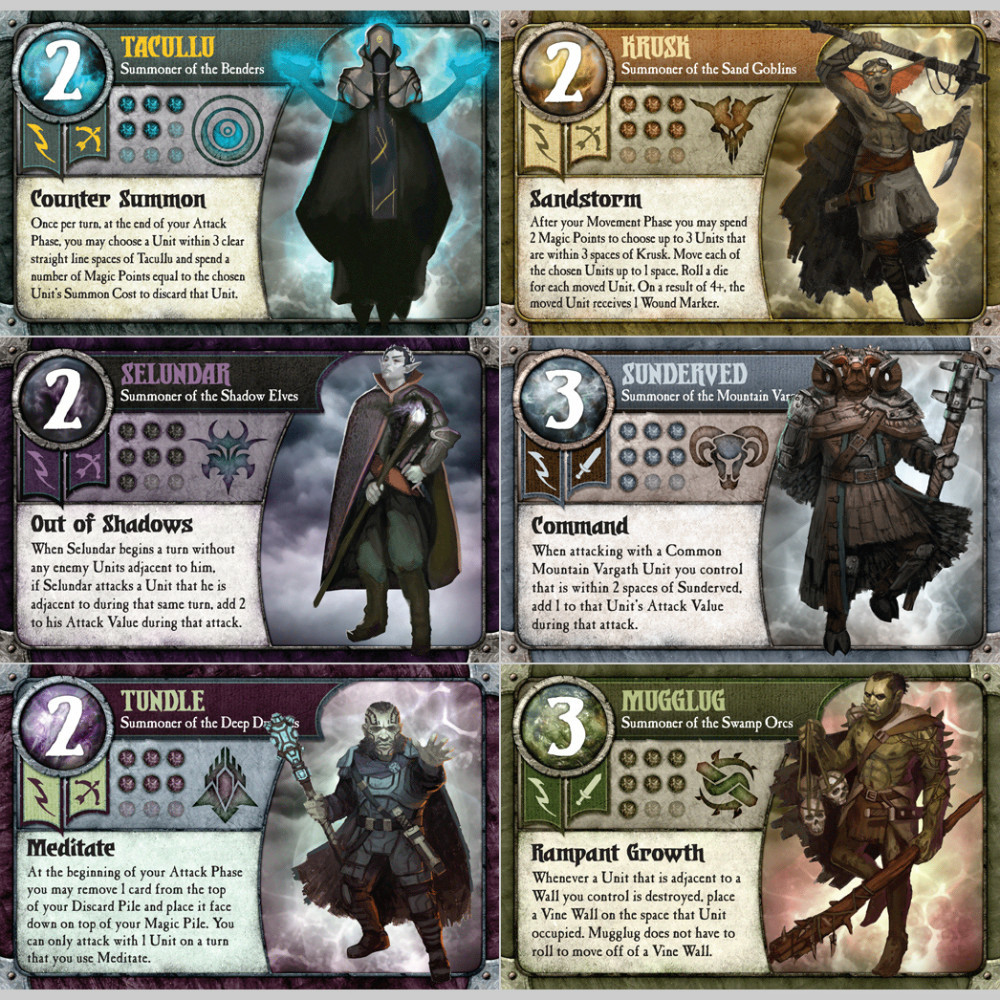 With 6 Summoners in the Master Set, it’s a great value box set for beginners.

Needless to say I’m a massive fan of Summoner Wars. With the Master Set (the first big box) at R750 I received 6 unique factions that play so differently and are balanced in the way that it’s simply my game play choices, and not the factions strengths and weaknesses, that steer me to the laurels of victory or jaws of defeat. One criticism would be colour choices of the art, with many factions being too similar in hue as well as the poor quality of dice shipped with the sets. However the actual art, card quality and design open this thematic world to players into believing that their Tundra Orcs are rushing the bastions of the Phoenix Elves. If you enjoy fantasy battle games for 2 players with a lot of variety and strategic depth, it’s time to grab your summoning stone and try to lead your faction to glory.

Despite pivotal moments of chance, Summoner Wars remains my go-to for head to head "miniatures" gaming with new and experienced players alike. It offers a range of diverse factions to play and a variety of strategic decisions that all matter. I'd recommend this to any board gamer with an interest in miniature style games that doesn't want to jump in at the deep end or just those players that love great dueling games.