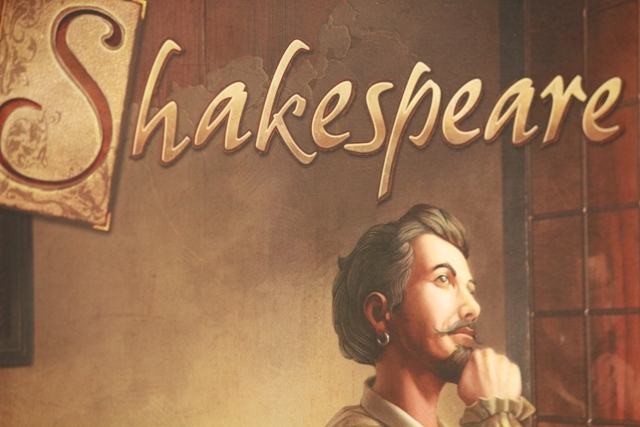 What is it? Flamboyant thespians, overly tired set-dressers and an empty coffer are the typical problems any theater manager worth his salt should be able to navigate. With just six days between you and national renown, will you be able to produce a performance fit for a Queen?

To buy, or not to buy, that is the question:
Whether ’tis Nobler in the mind to suffer
The Slings and Arrows of outrageous FOMO,
to take Arms against a Sea of opponents,

And by opposing end them: to win, to lose
No more; and by a win, to say we end
The Heart-ache, and the thousand Natural shocks
That AP is heir to?

There are certain games that push the design envelope, that introduce innovative mechanics as a blueprint for a host of future titles – think Risk Legacy for example. Then there are the titles that size upon existing blueprints, and go at them with a pair of scissors and glue like a 3-year old in kindergarten. Shakespeare is very much the latter, and what emerges from that flurry of snips is a game at once familiar and yet distinctly fresh.

The concept is simple – in just six days, the Queen will be touring a number of local theaters seeking to grant patronage to the troupe who most impress. As the manager of one of these theaters, it’s your task to hire the creme de la creme of talent – actors, writers, craftsmen, everyone will have to play their part to perfection if your troupe is to receive the Queen’s favour. 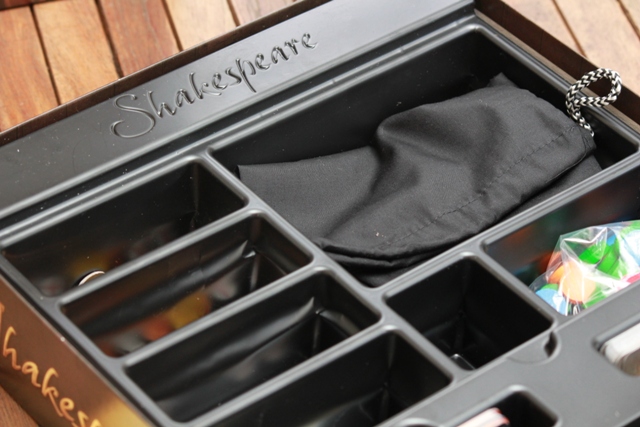 Plenty of space for hopefully many expansions to come

All The World’s A Stage

Shakespeare is certainly a pretty game to look at – from the score tracks to the set and costume tokens to the artwork on the cards showing the various troupe members, components are colourful and the accurate depictions of many of Shakespeare’s most famous characters makes it easy to slip into your role as theater manager. Iconography is well-defined and quickly understood, but there is a handy cheat sheet explaining the various special abilities and bonus cards.

The rulebook is comprehensive and leaves little ambiguity, but it does require perhaps a few more readthroughs than is really necessary. Perhaps a more succinct summary of the actions with more in-depth clarifications following may have made for less rereading or paragraphs, but this it’s a subjective issue. Praise be for a quality box insert, with plentiful and deep trays over which the player boards fit snuggly. Props also for the two cloth bags for the costume and set tokens – Ystari Games certainly haven’t skimped on quality. 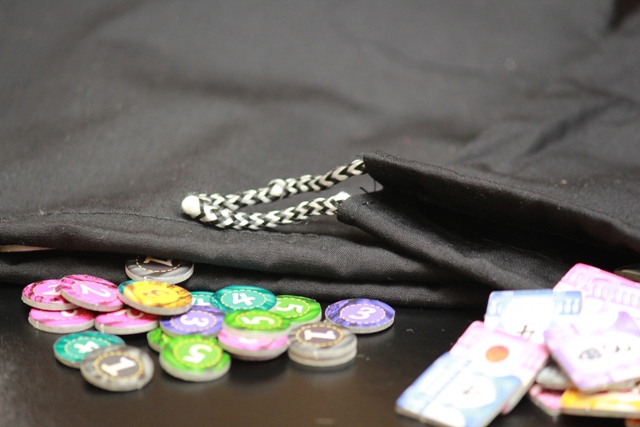 If costume tokens be the food of love, play on

It would prove nigh impossible for me to highlight what makes Shakespeare such a genuinely clever game without at least as brief a rules summary as I can muster, so with much ado about nothing here goes. You may perform up to five actions per turn, with an additional recruitment action if you so choose. Action selection is indicated by placing a cylinder on a character card and then effecting the ability of that character. At the start of the game, you’ll have five characters in your tableau, with that recruitment action allowing you to add up to one additional character per turn.

What do these troupe members do? Well, craftsmen allow you to purchase costume tokens or set dressing tokens, which are important for activating bonus abilities and maintaining your position on certain scoring tracks. Actors provide not only a body to wear these costumes, but also a means of improving your place on the three Act scoring tracks. Jewelers give access to certain special costume/set tokens otherwise inaccessible, and the Queen herself will provide additional funds or allow you to take an Objective card, these serving as a means of acquiring additional Prestige points. 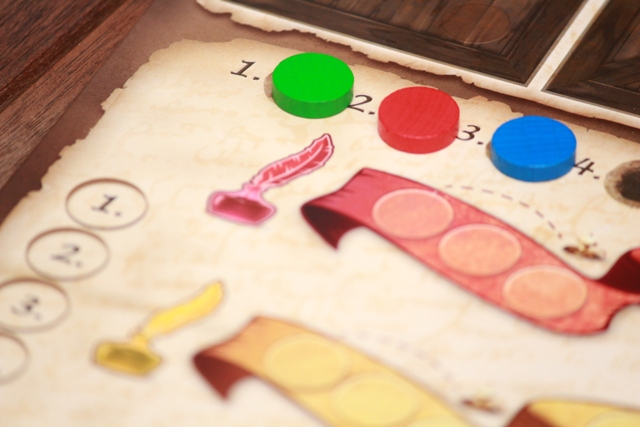 On days 4 and 6, it’s time for a dress rehearsal and any fully costumed actors will increase your position on one or more of the three Act tracks, thereafter Prestige points will be assigned depending on your final position on these tracks. For example, Act 2 grants Prestige for the players in first and second on the days of a dress rehearsal, whilst Act 1 will grant additional coin once a certain spot on the track has been passed. Why is coin important? Well, your troupe don’t work for free!

There are rules for set building and costumes, there’s an Ambiance track that also requires a beady eye and an Initiative track for deciding ties, but the essence of the game is contained in that short summation. It’s nothing you won’t have encountered in a dozen other Euros, and whilst the game’s theme may appeal, that’s not enough to set it apart from the multitude of quality Euros available.

But as with many of Shakespeare’s greatest works, this is but half of the story. 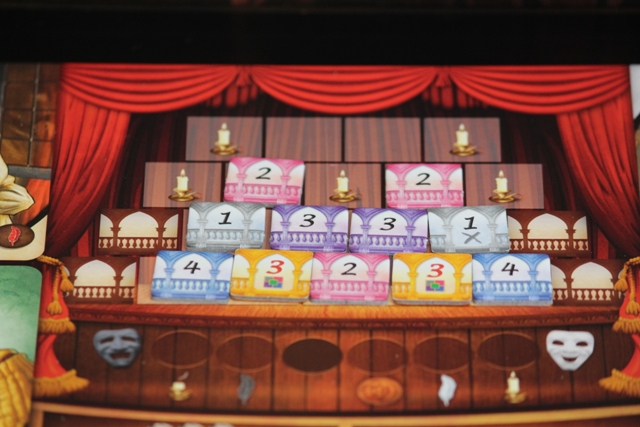 All that glisters is not gold

Uneasy Lies The Head That Wears The Crown

The first indication that Shakespeare intends to make origami with the blueprints of Euros that have gone before, happens in the very first action of the very first turn. Those five actions you want to perform per turn? You need to blind-bid on them. Players will each select up to five of their action cylinders, and simultaneously reveal. The person with the fewest cylinders will not only be first in the turn sequence, and as you might imagine going first will generally be of massive importance, but they also receive a Prestige point. Each round, a new set of characters will be placed on the table for recruitment as well as fresh costume and set tokens and take my word for it, given the unique powers of certain characters as well as the limited availability of certain tokens, chances are an opponent will be eyeing up the same strategy as you.

And whilst it would seem obvious that being able to perform more actions than anyone else should negate the penalties of being last in turn sequence, a set builder can’t craft an impressive set if there are no tokens left for him! Two powerfully performed actions will almost always offer far greater value then five sub-optimal ones. Further complicating this already tough strategic decision is the Rest mechanic. At the end of each day, you will have to rest all but one of the troupe members to have activated that turn. If you utilised four characters today, three of them will have to rest the next day. And as I’d imagine it might be when trying to manage a real theater, there is always one area that’s going to get the short end of the stick. The trick is in knowing how to mitigate the negatives that may follow ignoring a particular aspect. 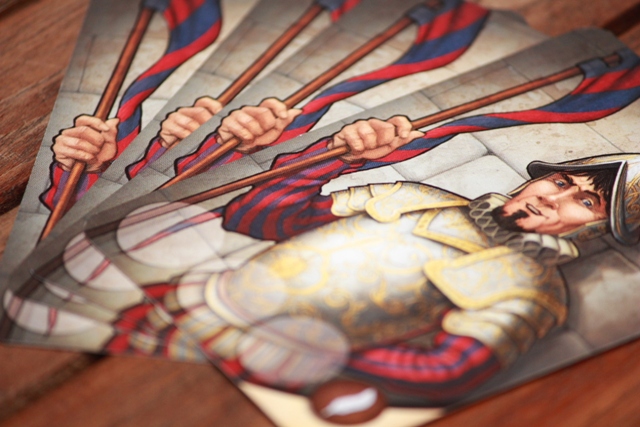 Extra, extra! Read all about it!

On the flip side…no, really on the flip side of every character card is an Extra, a slightly subpar thespian who may not impact the Act tracks as much as an Othello might, but can still wear a costume and has the benefit of working for free. Yip, as I mentioned earlier almost every character needs to be paid upon completion of the performance (i.e. at the end of the game before final scoring). And if you can’t pay a character, you’ll lose 2 Prestige points. Given that funds only ever trickle in like the micturating habits of a 90-year old and that certain characters demand as much as 5 gold coins, managing your finances tends to be a rather stressful endeavor.

Mistakes are costly. Like casting a Schwarzenegger in Die Hard instead of a Willis, or more appropriately hearing Nicolas Cage attempt ‘What light through yonder window breaks’, in a game with scoring as tight as Shakspeare’s an errant step may prove disastrous. And I wouldn’t want it any other way. When first assessing the various tracks or looking through the bonus objective cards, you’d be forgiven for thinking that a reward of one or two Prestige points is pittance for the work required. And then your first game ends with the winner on 12 points with second-place only 2 points behind, and you realise that Shakespeare is a game won by inches and not by yards. Every decision has weighty consequences, every point earned is a scrappy 1 -0 football victory. 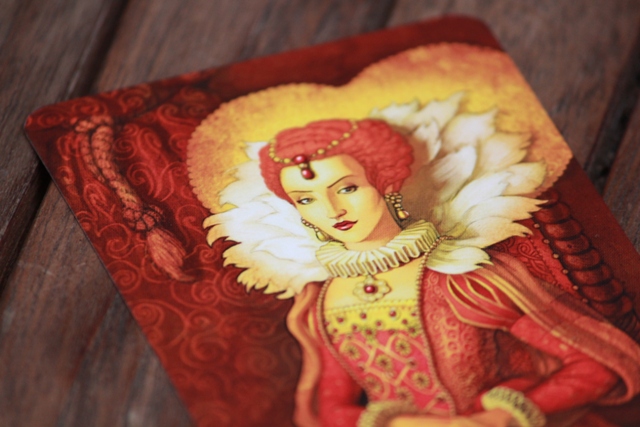 She is NOT amused

Shall I Compare Thee To A Summer’s Day?

This performance is close to perfection, but flaws still exist. The rich theme doesn’t quite follow through into the gameplay as strongly as I might have hoped. Visuals aside, once you’ve navigated a few days it doesn’t feel at all as if you’re building up to anything beyond positioning yourself as efficiently on the score tracks as possible. Player interaction is minimal – beyond potentially interfering with an opponent by snatching up tokens or characters before they can, the work of an underfunded theater manager is a solitary task. Personally I found that having to anticipate what my opponents may do in the blind-bidding as well as taking educated risks based upon what  deduced their strategies to be, more than made up for any perceived lack of genuine interaction.

Though the bard himself may have specialised in Tragedies, Comedies and Histories, the game itself argues for a fourth category – that of Triumphs, for it is indeed one. The neatly reworked mechanics that breathe new life into familiar design, the multiple approaches to victory, the tight scoring and engaging gameplay – Shakespeare is a game far easier to pick up and play than it’s seemingly complex facade, but still requires the same level of concentration and forethought as following Macbeth does. Highly recommended.

More tempestuous than The Tempest, Shakespeare is certainly no comedy of errors. Measure for measure, this Ystari title is one of 2015's finest Euro's. You will find no love's labour's lost here, just a midsummer night's dream.