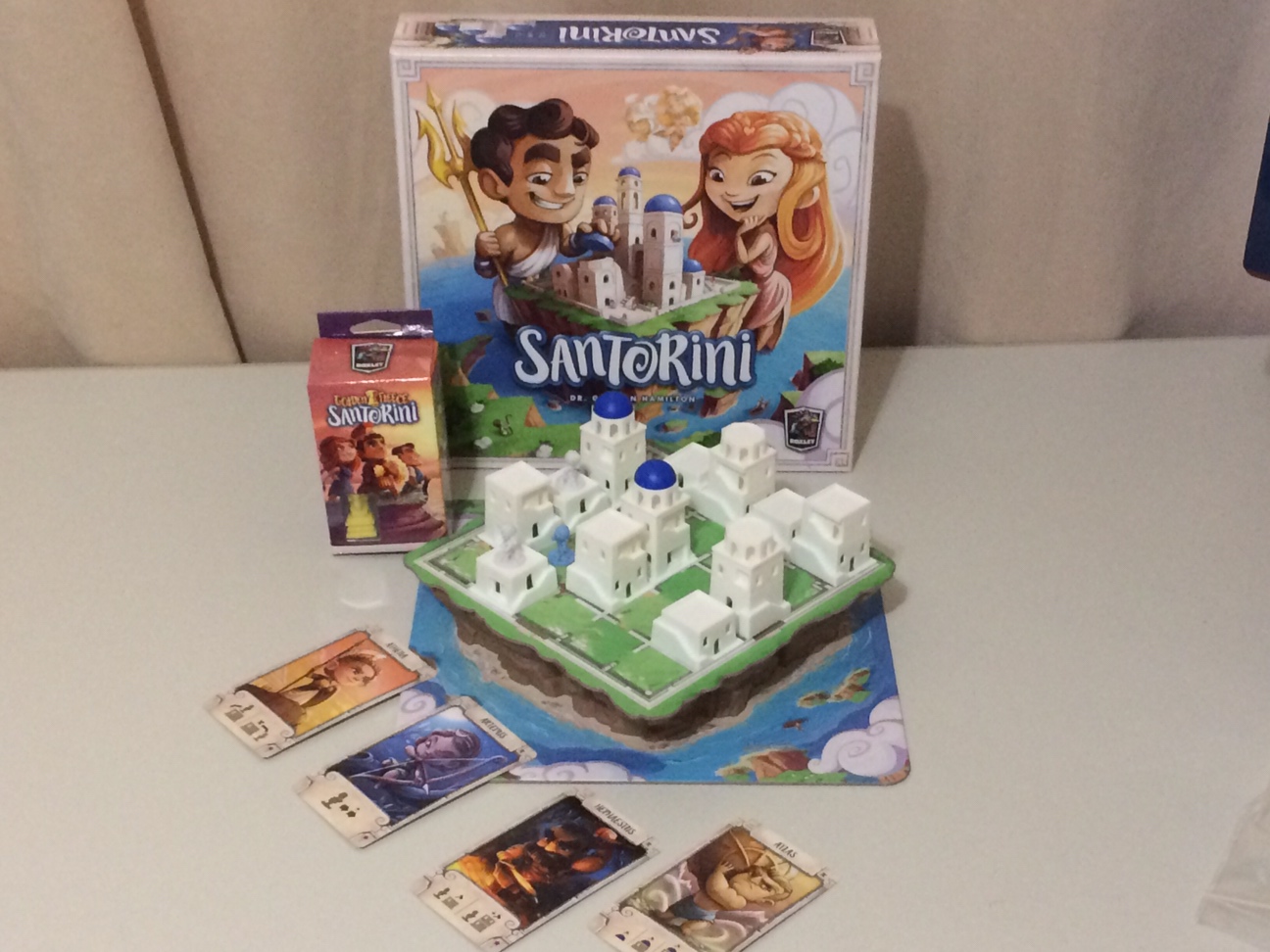 What is it? Greek Architecture has always been admired by both mortals and Deities with Mortals always building on hills to try and ascend to the realms of the gods. You have 2 builders, one blessing for the Greek Gods and a will to build up the Island of Santorini to reach the heavens. However, you're not alone and only one of you can be truly blessed while bidding to be the Champion of Santorini.

Abstract games so often get a bad rap in relation to fun. Whether it’s the indoctrination of Chess as the only truly great abstract game or the endless hours of checkers, backgammon and other 4-game-in-1 sets many young children are given at gift giving occasions, never have any of these games caught the attention of eyes wandering across the table looking for excitement. I’m not knocking abstract games at all, Chess is an excellent game that taught me a wealth of strategy and skill, and many others got me into gaming with their simple rule sets but deep mastery requirements. However, even in recent years with Yinsh, Giph, and Tastu coming in binary colours and grids with very little visual appeal, it seems that very little has changed in regards to many productions of abstract games (Onitama being a exception to the rule we’ve already reviewed). So how do you feel about a holiday in Greece? Pretty good I’d imagine? 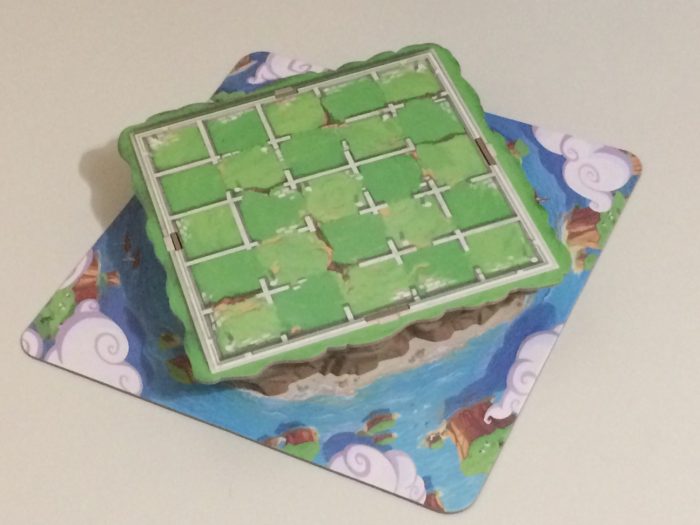 Santorini is an abstract strategy game for 2-4 players designed by Doctor Pickle (Gordon Hamilton) and published by Roxley Games. On a three dimensional board, representing a 6×6 grid of the Greek island of Santorini, players will control workers who will build and then climb structures to attempt to reach high enough to become closer to the Ancient Gods who have blessed them. In a 2 player game on each turn, players will move one of their 2 workers to any surrounding space (in a orthogonal or diagonal direction) and then build a level of the structure. A completed structure will have four levels, from the base through to the cap, and players can build any level onto a space surrounding their builder. To win the game, you’ll need to get one of your builders onto a 3rd level structure which takes some time and careful building planning as builders can only move up a single level at a time, but are able to move down as many levels as they want to move to a surrounding space. You’ll carefully plan moving your 2 builders to out maneuver your opponent to cap buildings (add a fourth level which blocks movement onto that building space) and make sure you reach the 3rd level yourself first, but if you find yourself unable to both move and build in a single turn legally, you forfeit the game. 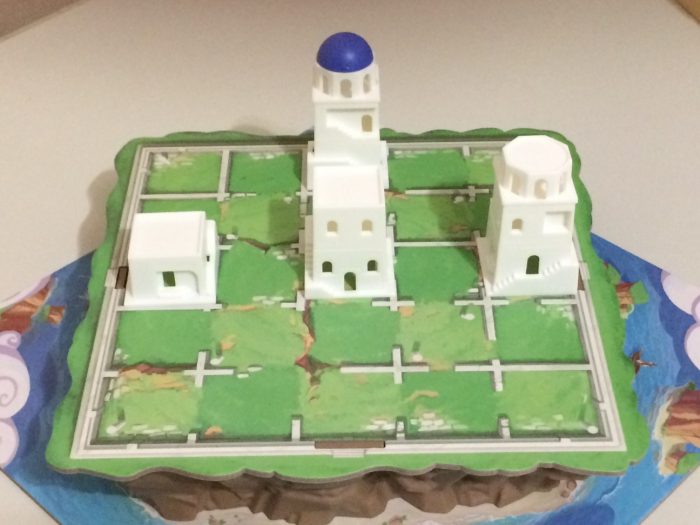 With the Mantra of “learn for 30 seconds, play for life”, Santorini offers players an interesting three dimensional landscape of emerging buildings and victory opportunities.  You’ll start your builders in different starting locations and move in formations to block off your opponent while feinting left and right to get forge the perfect path to victory and like many of the great abstracts, there is a tension in each and every move as it’s often abundantly clear when you fumbled to hand your opponent victory. In this pure mortal form, Santorini is a satisfying game of twists and turns, until you unleash the power of the gods…

And this is where the cataclysmic shake of the system occurs when the Ancient Greek Gods choose their favourites. At the beginning of each game of Santorini you’ll be granted a unique god power to differentiate your strategies and play style from your opponent, while making sure that you don’t succumb to the will of their deity. For example, in one of our earliest races between Apollo and Prometheus, the builder of Apollo is able to move into an opponent builder’s space (usually considered to be blocked) and force that builder into the space vacated, while the artisans of Prometheus are able to build twice per turn before and after movement, granted that the builder chosen does not move up a level during their turn. Hermes allows builders to move as many spaces as they’d like as long as they stay on the same level during a turn, Dionysus allows you to take an action with your opponent’s builder should you cap a building during your turn and Morpheus allows builders to store blocks on his God card  instead of building during a turn, only to use as many stored blocks in another turn during their build phase to rapidly construct! Some gods affect other players movements, others boost their own builders but all make each game of Santorini you play a unique experience. 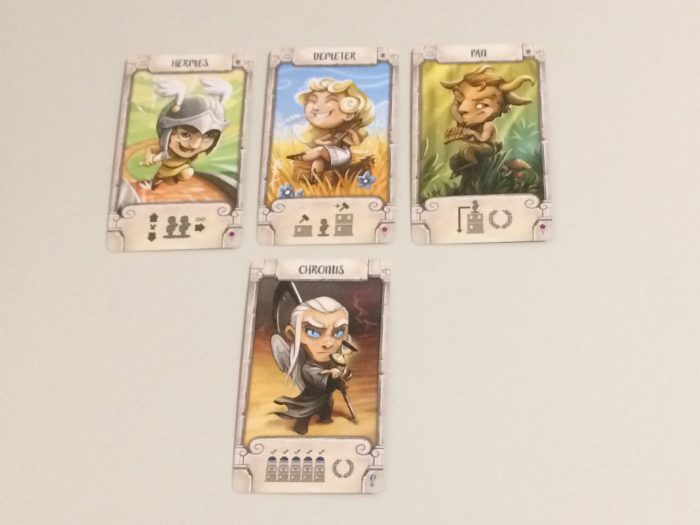 And what a wonder building on the Isle of Santorini is for players of this simple abstract game. While Dr Pickle has worked on his mechanics throughout the years to include more gods (his original blocky version with 8 gods published in 2004), the partnership with Roxley Games and the incredibly successful Kickstarter campaign brought the island to life in a creation of beauty. The game starts with a 3D plastic cliff that holds up the Island space above a picturesque yet comical ocean setting and then as you place buildings, they rise up in the traditional style you’d align with Greek villas in the region complemented by the white building choice with blue caps. The builders are detailed miniatures not associated with abstract titles and the artwork on the god cards are whimsical takes on the Greek Gods with clear iconography which after a few plays becomes second nature. It’s a stellar production and the quality components coupled with an engaging three dimensional strategy element making a real collectors piece in any collection, sure to catch the eye on the table.

Already Roxley Games has an expansion “The Golden Fleece” which adds an additional play style to Santorini. At the start of the game, there will only be a single God power in play, aligned with the Golden Fleece miniature, which will be placed on the board by the starting player. During the game, only builders in the surrounding spaces of the Golden Fleece may use the Deity’s ability on their turn, causing some interesting tight back and forth in a concentrated area. You’ll also get an additional 10 God powers to add to the already 30 in the base game offering even more versatility to the game as well as Hero powers, which are “weaker” powers that can be used by experienced players to handicap themselves against the gods or simply for advanced players to try new tactics. 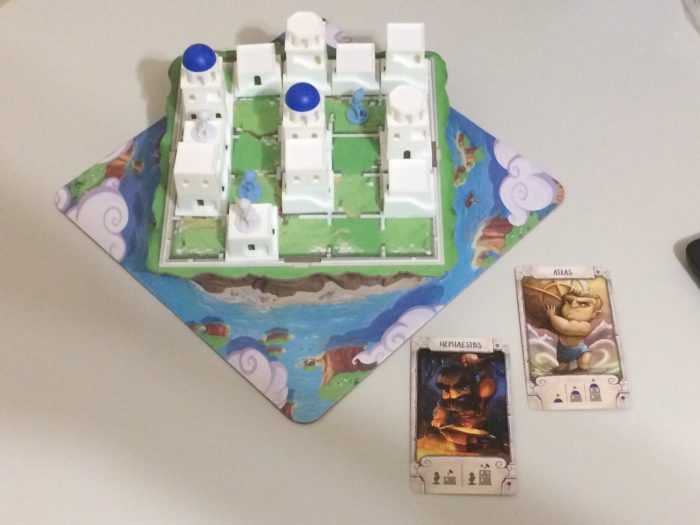 While I feel blessed to have had my time to play Santorini, like many of the great Greek Tragedies the Gods tend to offer sweet nectar with one hand and a scroll of misfortune in the other. Whilst with the Golden Fleece expansion they disallow certain god match ups to occur, some of the base game gods offer easier winning boons than others with equivalent level players. In a 15 minute game, this is not a major issue but do be aware that in a couple of games we had, one player had to try that little bit harder in the way they navigated the strategies of others.  Three players is not a recommended player count for many abstracts, and this doesnt change with Santorini in our eyes, with 6 builders on the small board creating mostly a tit for tat style of blocking until a player emerged victorious or one could not fulfill move requirements and had to forfeit. Lastly, all this production comes at quite a cost, for an abstract 2 player many gamers might be hesitant to pay nearly R1000 for a copy when eyeing other titles on the market.

So is Santorini a great game for lovers of abstract titles that are sick of moving black and white circles around a board? Undoubtedly and you should order your copy today to fill that void in your collection! It’s a to-and-fro tug of war between creating your own opportunities for victory while mitigating those of your opponent but it’s not going to be for everyone and at the price point it’s a risky investment to make without knowing that abstracts are for you. The expansion isn’t a must-buy and we tended to prefer the base game with the Gods, but with numerous 15 minute games just waiting to burst forth, it may inject the love of Aphrodite back into the tiles after a few hundred plays. With Santorini you’re getting the most gorgeous abstract production on the market with a wealth of variation in so many deity match ups and will be up there with Onitama with our favourite abstracts, but goes without saying that those who don’t love abstract games may not be swayed by all that glitters is gold.

I like to think of Santorini as that beautiful beach holiday in glorious sunshine with my feet bathed in the salty water and the taste of Ouzo in my mouth after a dinner of Dolmades and Spanakopita. If you love the Mediterranean Island life by the seaside then you're going to be having the time of your life with the most beautiful sights, but if you know that you're into nightclubs and city life then this might not be the place for you to be. For those who even love the beach a little, get yourself a copy of Santorini and you will have no regrets,