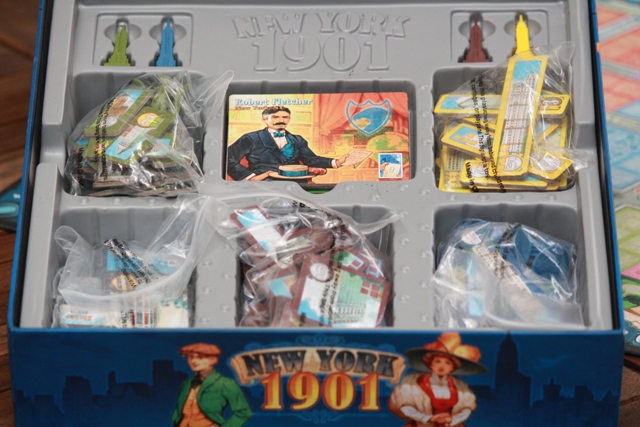 What is it? It's like Gangs of New York, only without all the violence and Daniel Day Lewis' epic moustache.

I was never much good at Tetris. Not awful either, but call it a lack of pattern recognition or a failure in spatial perception, you won’t catch my name on any leaderboards. And that digital impediment seems to have followed me into the cardboard universe too. Which is a rather unfortunate hindrance when one enjoys that particular genre as much as I do.

2015 was a pretty great year for tile-laying games. Isle of Skye took many by surprise, as did the delightfully devious Patchwork – both games that didn’t carry a tremendous amount of hype prior to release, but have since been the recipients of wide acclaim. There was a tile-laying game however that did build up a head of steam going into Gencon last year, and was in fact on my list of titles to watch. That game is Blue Orange Games’ New York 1901.

Since I knew a fair bit about the game going into this review, let’s talk expectations for a minute. A skyscraper building game that lacks verticality? Check. A gateway game, easy to learn and with a quick playtime? Check. A pinch of luck with a few glugs of strategy? Check. But does the reality live up to the expectation? For the most part, yes it does.

If I Can Make It There 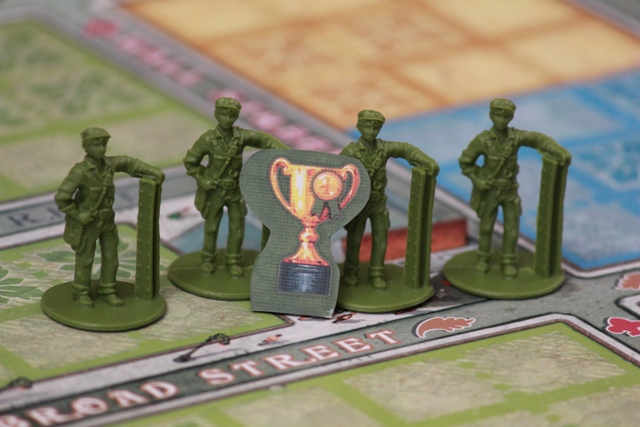 New York 1901 is as straightforward in design as it is in execution. Two to four rival property development magnates are guiding Lower Manhattan into the 20th Century, placing Tetris-style tiles on a map of New York’s famed Financial District. Turn sequence is simply a case of making a fairly simple decision – do I build or do I tear down? In rules terms, you can acquire land and/or build, or alternatively demolish and rebuild.

Turn of the century New York is a civilised place, one can’t just go plonking buildings down willy nilly. No siree, you want to see steel and concrete to kiss the sky, you need to purchase a Lot first. New York has been conveniently demarcated in red, yellow, blue green and pink zones, colours which correspond to the Lot deck. There will always be 4 Lot cards available on a turn, so your first order of business is to select one. Lot cards will indicate either two or three squares in a particular zone of colour, decide which lot is best suited to your plans, and place one of your 4 Worker minis on that Lot indicating it has been reserved for your use. 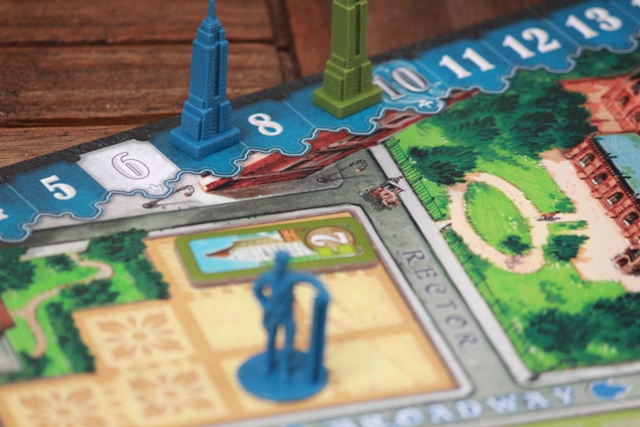 Once a Lot has been reserved, you will have the option to build a Skyscraper. All players have matching sets of Skyscrapers of varying generations – bronze, silver and gold. Each tile indicates a number of points, which are scored upon construction. Bronze buildings are available from the start of the game, whilst silver and gold may only be used once your marker has passed a particular point on the score track.

But true progress is never achieved from building once and then stepping back and marveling at your creation. The true pioneer is constantly seeking to better his fortune – those Gold 5 point buildings are worth far more than their smaller 2 point Bronze counterparts. And so if no acquire/build option is taken, players can choose to demolish/rebuild. You can demolish any number of your own skyscrapers that fall within the footprint of the new skyscraper, or remove and Worker reserving a Lot that would be occupied by the new structure, which must be of a higher Generation. Demolishing doesn’t cause players to lose the point values of the destroyed building/s. 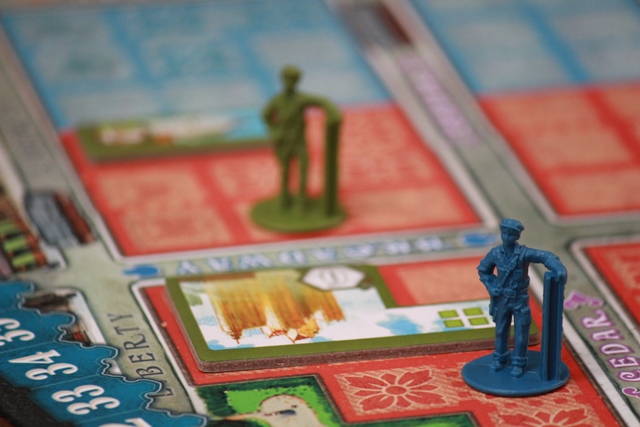 Blue player has reserved a Lot adjacent to Green’s starting tile. Green’s not going to be please about that…

For those who truly aspire to Trump-ian (or should I say Drumpf-ian) levels of excess, there are 4 Legendary skyscrapers available to all players, who in turn may only build one. These Legendary buildings are worth a whack of points, but require careful planning due to their irregular shapes and sizes. Once any player has only 4 unbuilt skyscrapers remaining, or if there are only 3 faceup cards left in the Open Market and the deck is empty, the end game is triggered and the remaining players all have one last turn. The player with the most points wins, ties being broken by the player with the highest Legendary skyscraper (height in feet is listed on each Legendary skyscraper).

A final gameplay twist is introduced by the Actions cards and the Bonus cards. Players all start with 3 Action cards that allow them to build twice on a turn or take two Lot cards, but once an Action card is played, it is returned to the box. Bonus cards are simply goal cards that award points to the player with the most buildings along a particular street, or for the player who has the most Bronze skyscrapers on the map at the end of the game. These Bonus cards vary, and can be excluded if needed, though I the game is genuinely easy enough to learn that I don’t see why anyone would want to play without the bonus cards. 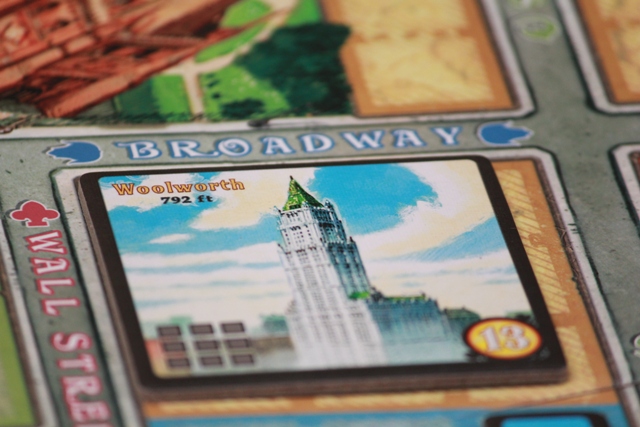 The Legendary Skyscrapers are all historically accurate, which is a neat touch

I’ll admit, after having read the rules and unpacked the contents with everything set up for a first game, I wasn’t sold. It all seemed just a little  too simple. Not that simple is a bad thing – it depends entirely on where the simplicity occurs – but if the focus of the game is strategic and the strategy itself comes across as a little thin, well let’s just say my initial eagerness was somewhat tempered.

A rather brisk 30 minutes later, compounded by the self-satisfied smirk on my opponents face, and I had clearly underestimated. Strategy is a tricky beast to wrestle with when it comes to the gateway segment. There’s a relatively small landing area for ideas tossed out of a plane – Orleans is heavy enough to veer off course whilst a No Thanks (as fun as that game is) carries so little weight it’ll never touch down. The good news is that New York 1901 lands safely in the target zone. Which is great if you’ve been waiting for something to switch out with Ticket to Ride in a move ripped straight from the opening of Raiders of the Lost Ark. 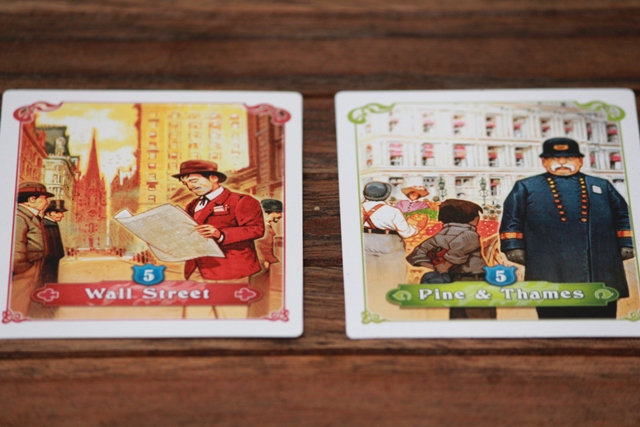 And that’s pretty much what I hoped it would be. The game flows in that effortless way that only the best gateway games seem to manage, time is precious and you never have quite as much of it as you’d like. Building outward cramps your opponents for space, but it means using all 4 of your workers constantly and largely ignoring the demolish/rebuild option. Conversely building upwards means a steady income of points and less reliance on having just the right Lot cards available, but your opponents will be left to their own devices.

Points are plentiful, but as all players have access to the same sets of tiles and build at similar rates, scoring is generally very tight. Which means that often it’s the Bonus cards that prove decisive. It’s here where the strategy truly shines, as I’ll attempt to illustrate in the following example. The Broadyway and Wall Street bonus cards are in play and each will award 5 points to the player who has the most skyscrapers adjacent. So size is meaningless – you can have a single skyscraper that takes up a fifth of Wall Street, if someone else has two tiddly buildings they get the points. and skyscrapers adjacent to two streets will count separately if both those streets are in play.

Keeping a handle on your opponents strategy, making sure you are reserving the optimal Lots, knowing when to demolish – New York 1901 rewards players who establish a solid strategy early on. If you meander through the early rounds hoping a strategy will materialise from the ether, you’re going to get punished. Those three actions cards can also prove decisive. Each are worth a victory point if unused, but for me knowing when to grab two lots or build two skyscrapers can provide a crucial boost. 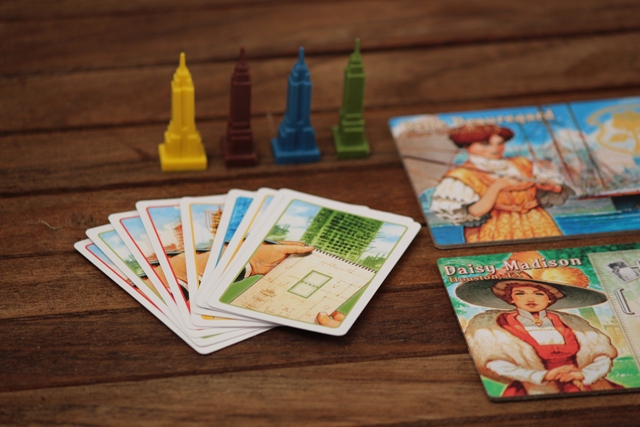 Player characters are different in name and appearance only

Weak spots? Whereas the pace of the game is certainly a positive in how smoothly it flows and the total average play time, your strategy plays out in almost slow motion. There’s no opportunity to spring a surprise of sorts, to zig left when everyone thought you were zagging to the right. I’d also be interested to experience a tenth or an eleventh playthrough of the game – the hallmark of the great gateways such as Ticket to Ride are in how well they stand up to frequent plays and I’m not entirely convinced that New York 1901 has enough inherent fun to prove as enduring.

Also, and it’s not really a criticism of the game, but it would have been delightful if the components were three dimensional. There’s something just ever so slightly unnatural about building skyscrapers that don’t actually reach more than a millimeter or two off the board. Lastly, the tetris aspect of the tile placement doesn’t play into the game as much as it does with a Patchwork, for example. It’s enough to keep things interesting, but if that’s your genuine attraction to the game, that aspect may prove a little shallow.

Is there enough here to warrant a recommendation? Yes, if you are specific about what it is you’re looking to get out of the game. It’s definitely a gateway experience, albeit one with a pleasing degree of strategy. The components are excellent, Vincent Dutrait’s charming artwork lifts the overall aesthetic, the gameboard is colourful and sufficiently detailed and the cardstock is fantastic. Would it have appealed as much without the art design being as strong as it is? That’s certainly an interesting question for a future feature. It’s also a very different experience at two as it is at three or four players, but still satisfying in different ways. At two, space isn’t as much at a premium and you’re able to focus on your strategy without much interference. At three/four however, for a game that doesn’t inherently offer conflict things can quickly become merciless.

Review Copy of York 1901 was kindly provided by Skycastle Games for this article.

The streets of New York are paved with opportunity, in this case for bringing new gamers into the fold or getting something other than Ticket to Ride to the Sunday family lunch table. It's not going to win any awards for reaching new heights of greatness, but it is a slick architectural feat of gateway gaming.