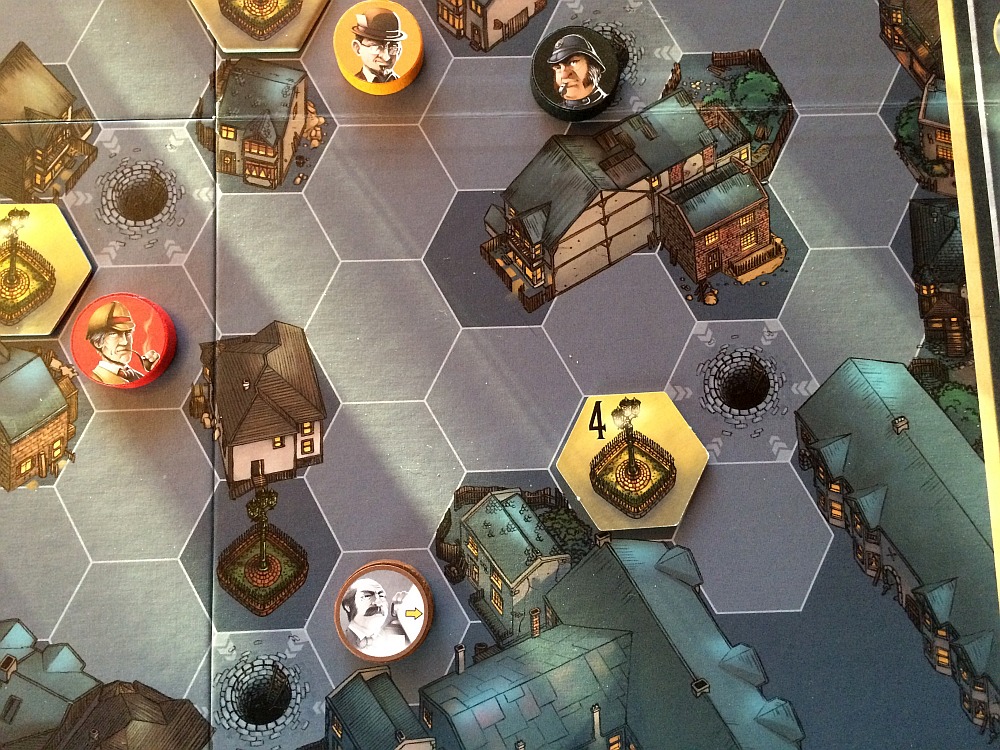 What is it? Hurrican Games have re-opened the cold case of Mr. Jack, 10 years after the first murders in the White Chapel district, London. New witnesses have shed light on different areas of the shadowy cobblestones and there are new escape routes to be analysed. But time ticks on - take too long to identify the suspect and you may discover another victim amidst the poor denizens of the sleazy slums of the capital. We aim to deduce whether this case for Mr. Jack being one of the greatest 2 player mysteries ever discovered or whether it eludes us completely.

The shrill blast of a police whistle pierced through the stillness of the eleventh hour and almost cut through the fog of White Chapel, London. A shriek followed shortly as the disemboweled corpse of a working girl was pulled from a dark alley between the degenerate buildings of London’s poorest district of ill repute. Police barriers were being erected on either side of the slums to bar the escape of the unknown killer, while citizens huddled around the lamps for safety and notable members of the community were seen to be searching the cobbled area for clues. Sherlock Holmes, Dr. John Watson, Inspector Lestrade and Sargent Goodley were all canvassing the neighborhood, with Sir William Gull, Miss Stealthy, intrepid journalist Jeremy Bert and lamp technician John Smith all being seen in the area. Which one of them was responsible for the murder? Who is attempting to flee White Chapel while Scotland Yard closes in? With the chaos of everyone attempting to solve the crime, will Jack escape?

The legendary status of arguably London’s most notorious serial killer has lived on through numerous works of fiction and theories inserted into almost every medium of popular culture imaginable, board games being no exception. In 2006, Bruno Cathala and Ludovic Maublanc had their earliest design collaboration published which would herald the start of one of the most lauded partnerships in modern board gaming. Mr. Jack was a simple, yet deeply rewarding strategic two player design which would spawn 3 variations in Mr Jack in New York, Mr Jack Pocket, and Le Fantôme de l’Opéra as well as an expansion. After 10 years, with the advances made in board game design, we eagerly got hold of the brand new 10th Anniversary edition which contained some balancing tweaks in regards to starting placements and board layout, as well as new art by the original artist Piero (Ghost Stories). 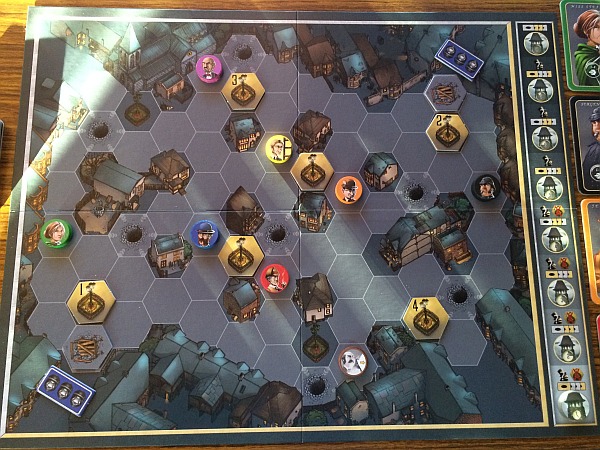 The starting positions of characters, lamps, manhole covers & police barriers for each game of Mr Jack

In Mr Jack, one player will take the role of the Detective, attempting to deduce over a number of rounds the true identity of Jack the Ripper and apprehend the killer, and the other player will take the role of Jack who is attempting to mislead the detective player with red herrings in order to shroud his identity whilst attempting to successfully get that character to exit White Chapel through one of the four possible exits on the board. The serial killer player will randomly take an alibi card from the 8 character alibis in the game to decide the identity of of Jack. The 8 character cards are then shuffled and 4 of these dealt face up to show the characters that will move and act in the first round. For the initial round, and each odd numbered turn following, the Detective player will choose which four characters he would like to play, moving that character and then using their unique special ability (which in most cases is mandatory but sometimes optional). Jack will then activate (move and use the unique ability) in turn 2 of the remaining 3 characters and finally the detective player will activate the final available character for the round. Jack will then reveal whether or not his character is not visible to other characters or in the light (adjacent to another character or illuminated by standing next to a street lamp or being caught in the beam of Dr. Watson’s lantern) and then deductions can be made by the Detective player to eliminate suspects. At the end of the 1st round the number 1 lamp will be extinguished creating more areas of darkness in White Chapel, and the other 4  character cards will come into play. 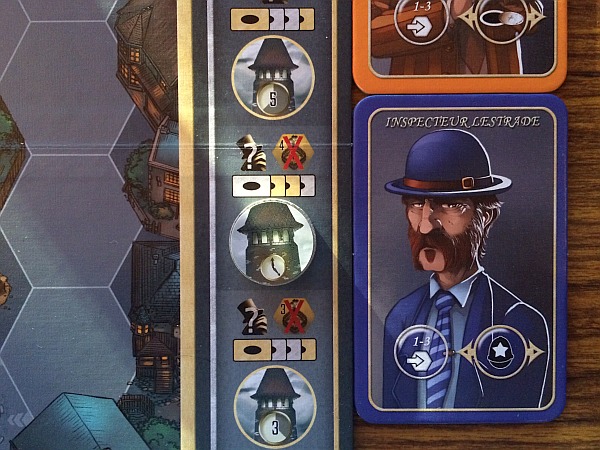 Turn order is extremely important for both the hunter and the hunted to maximize suspicion or deduction!

In even numbered rounds, Jack will choose and play characters for the 1st and 4th turns (similar to the Detective player in the first round) and the Detective will play the 2nd and 3rd turns. Similarly at the end of the round, Jack will announce whether he is not visible or illuminated again and another lamp will be extinguished. Play will continue until either Jack escapes through one of the 4 corner exits, or the detective player moves another character onto the suspect that they consider to be Jack and accuse them, hopefully successfully!

Each of the characters have a unique ability which allows the player that controls them to leverage an action that can provide information or misinformation to the opposing player. Sherlock Holmes is able to draw an alibi card to whittle down the number of suspects, Inspector Lestrade moves one of the two police barricades to block another exit from White Chapel, Sargeant Goodly blows his whistle to move other characters towards his location, Watson shines a lantern beam that illuminates characters in a straight line from his position, Miss Sneaky may move through obstacles such as houses, John Smith moves a Lantern location, Jeremy Smith moves a Manhole cover to block passages and Sir William Gull can exchange his position with any other character on the board instead of moving! Using the combinations of these characters powers allows Jack to stay in the Darkness or the Light, whichever keeps him among the current suspects for the Detective player whom is trying to whittle down the suspects to apprehend the killer. 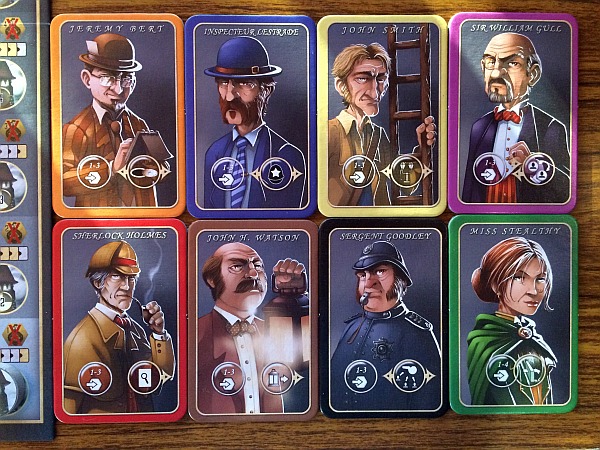 While the mechanics of Jack are surprisingly simple to learn by moving over land or through the sewers and activating the unique powers of the characters, it’s the control of the information where Mr Jack elevates itself to probably the best two player deduction game I’ve ever had rattle between my ears. As characters are eliminated as suspects by the detective, the wooden disks are flipped from the colour image side to the black and white image side and so the pool of suspicious characters dwindles and the action becomes more and more intense as the focus shifts to the remaining colour characters. While the other characters will still be used by players for their unique abilities, it’s the key elements of separating remaining suspects into the polar opposite light conditions to further whittle them down or keeping them together to remain where Mr. Jack “shines”. Jack needs to try move the killer towards the exit and have his final turn start in darkness to escape successfully, so all elements need to be crucially balanced. 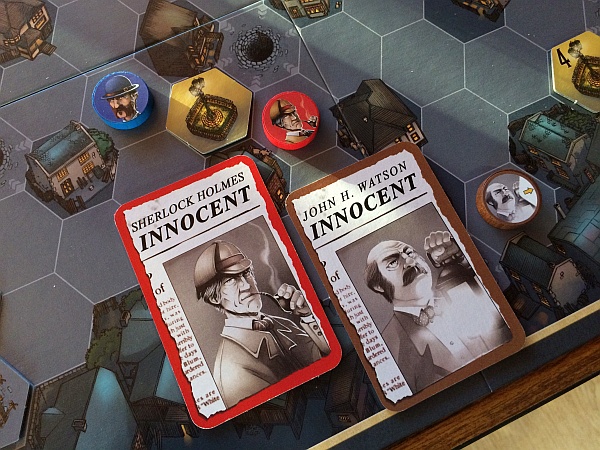 We’ve played multiple games of Mr Jack and found the side of the killer to be more challenging, however the balance of the abilities and knowledge control is beautifully poised on a knife edge. Over multiple turns, no further deductions were made by the detective as the light around White Chapel dwindled, only for the Detective player to tackle Jack as they leapt for the exit. In another cases, a simple combination of unique abilities allowed the killer to swap places using William Gulls ability and then scamper through the exit to continue their reign of terror! This game rewards continued play as each game setup is identical, and much like a game of chess it’s the strategic choices that players will make that create the tension and challenge level of the game. While small luck considerations need to be acknowledged in character card draw order, I’d stake my small intestine on the deduction and player skill being the determining factor of the cases outcome. 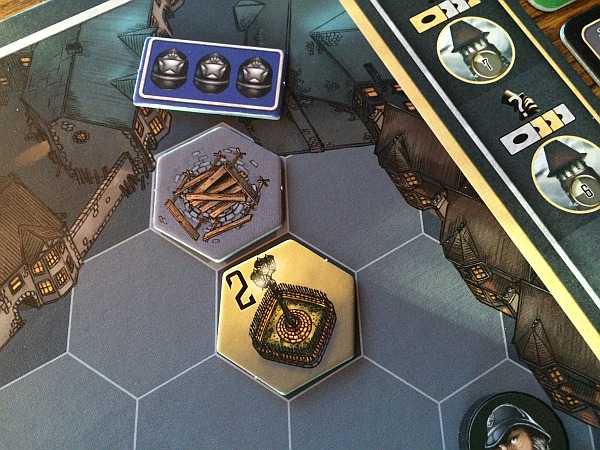 Simply put, I adore Mr Jack and believe it’s one of the greatest 2 player deduction games and unlike anything I have (or anyone I know has) in my collection.  if it weren’t for the fact that I don’t get sufficient time to play 2 player games with the same person I would definitely purchase this game immediately. It’s a fantastic game for couples and friends who consistently have time for two player games against each other, with increasing depth being found each and every time I’ve played it. At around 30 mins maximum per game, it’s a game that had us immediately resetting the board to try again with the knowledge that one of us made a critical error at a certain point in the match and focusing on ways to remedy this in future games. It’s a thinking gamer’s masterpiece that gets more beautiful with each brushstroke as you fill in the colours of the contours as you learn and master each move, knowing that the audience is watching your every move and remembering your techniques to mimic and understand them. If any of this sounds appealing, you HAVE to try playing Mr Jack and if you love solving puzzles and know someone you game with who seeks the same, buy this immediately.

For the 'two player' gamers who love deduction and a deep strategic experience in less than 30 minutes, I don't think you'll be able to find a better title than Mr. Jack Anniversary edition. Beautiful components, great artwork and a game that gets better the more you play it, especially with players of similar skill levels. Mr Jack slips as easily into your games collection as his namesake does through the shadowy streets of London, a unique title and a fantastic 2 player experience that will appeal to almost all gamers.