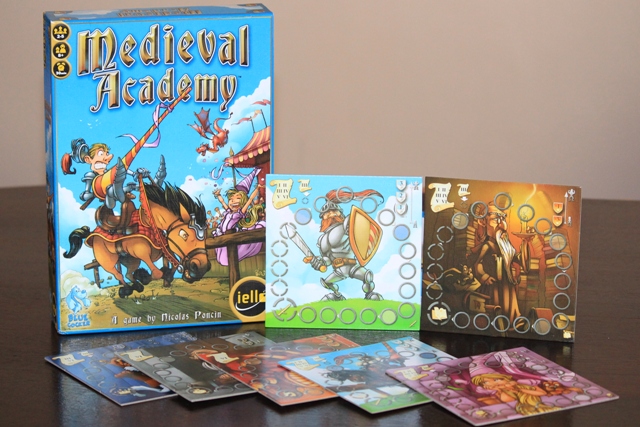 The life of a knight’s squire is one of discipline and dedication, just ask Podrick Payne. Packmule, seamstress, cook – heck even impromptu rescuer should your master be taken captive, yours is a thankless task that starts two hours before the sun rises and finishes three before it rises again. But, for the ambitious squire keen of thought, brave in battle and gallant of heart, glory and renown are an effective motivation. Why, even the King himself once polished the boots of the great Sir Kay.

Ambition though is plentiful, and your fellow squires also have designs upon capturing the favour of the court. And the affection of the King’s daughter whilst they’re at it. 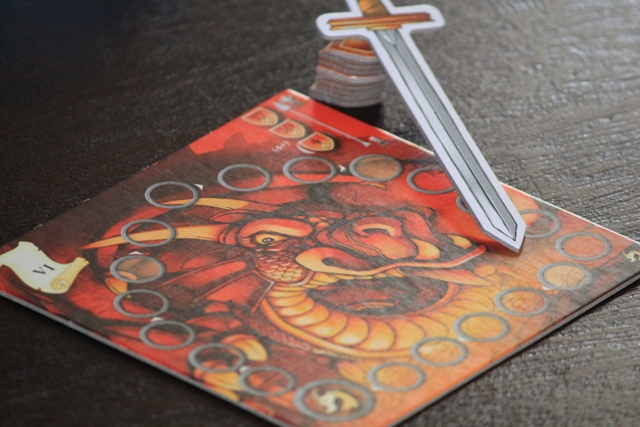 As much as I’m partial to the full blown, table-sprawling, multi-genre 180 minute titans, there’s an element of what’s been dubbed the ‘filler’ that I find just as entrancing. It’s not the shorter playing time nor the greater focus on social interaction, but rather seeing many of the most famous boardgaming genres distilled to their essence. Grinding the mental gears against Blood Rage is fulfilling indeed, but there’s something about witnessing the purity of a single mechanic at play that I find quite thrilling.

And so when compounded with my love for card drafting, I was indeed keen to experience the trials and tribulations of a squire-in-training in Iello’s Medieval Academy. Not quite at the filler level in terms of price and components, Medieval Academy’s design nevertheless still speaks to an attitude of simplicity. The artwork by Piero is an ideal match for the game’s tone – colourful and clean yet playful, it conveys a slightly tongue-in-cheek sense of humour which is a far better fit than a more serious approach might have been. 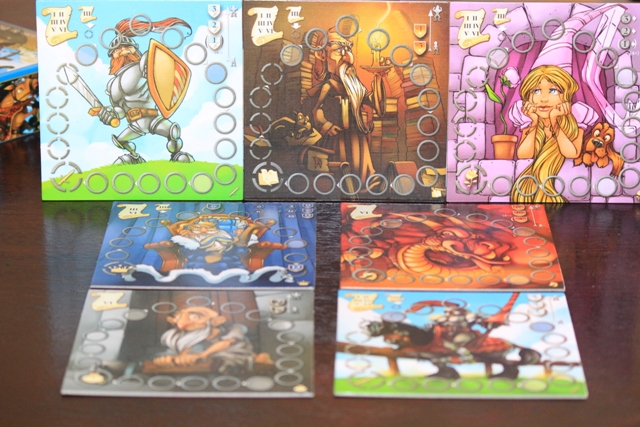 Better a silly girl with a flower than a silly boy with a horse and a stick.

What sorts of activities might we imagine a squire would need to undertake in order to feel the touch of King Arthur’s blade upon his shoulders and the title of Knight of the Realm? Slaying of dragons? Well of course! But only after having spent hours in the competitive arenas of the Joust and the Tournaments. Physical prowess alone will not earn him a seat at the Round Table – a true knight must have an intellect as keen as the edge of his sword. And it would certainly help in catching the eye of the King if he were to find time to serve in the court. A knight is a champion of the people – what kind of champion would he be if he did not see to the needs of the poorest? And if his gallantry were to win the heart of a maiden fair, well his destiny would have all the makings of tale fit for legend.

These activities also happen to correspond to the seven game boards players will use over the course of the game to chart their progress. Each board represents a unique way in which players can achieve their singular goal – the most victory points will be rewarded with a Knighthood. The three players who finish furthest along the pink Gallantry board are allowed to move any single marker on another board (or the Gallantry board itself) ahead between one and three spaces (first player moves three, second player moves two etc). On the Joust and Tournaments boards, again it is the three players furthest along the track on each respective board who in this instance score one, two or three victory (Chivalry) points. The red dragon Quest board also awards victory points, but only at the end of the last of 6 rounds – a potentially game-winning seventeen points for the leader. 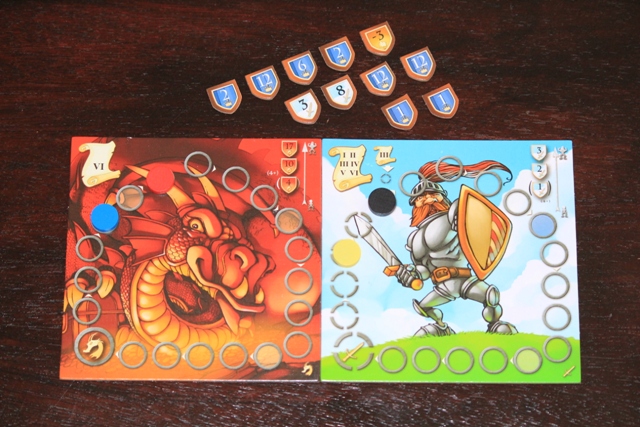 The blue King’s Service board doesn’t award points exclusively to the three players furthest along, but rather points are given to any player with a marker between certain brackets, i.e. markers between spaces 0 and 5 score their owners no points, whilst those between 6 and 11 award six points. Any markers who manage to reach the last space on the King’s Service board amass an impressive twelve points. The trick here however is that this board only scores at the end of rounds 3 and 6. Lastly, the Education and Charity boards can potentially penalise players. At the end of each round, the two least educated players will be docked up to three victory points, whilst a miserly spirit will only cost at game end – but a rather hefty ten points for the most Scrooge-like player.

So how do you move your player marker up the track on a specific board? At the start of each round, players will be dealt a hand of five cards. These cards as you might guess correspond to the various game boards and are numbered between 2 and 5. Players will then select one card to keep, and pass the remaining four either clockwise or anti (it switches each round) until they have drafted 5 cards. On a turn, a single card can be played and the player’s matching marker moved the number of spaces indicated on the card along the track of the corresponding board. Play rotates until 4 of the 5 cards have been played – that last card is discarded and then the boards are scored. All the cards are reshuffled, first player marker passes clockwise, and the next round begins. At the end of round three, the certain boards reset all markers to the starting space. 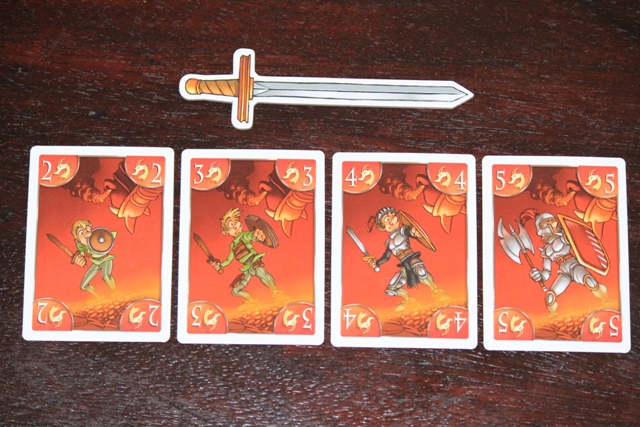 This is the shrewdness of Medieval Academy, the delightfully wicked distillation of card drafting at its most agonising. The action is simple – pick a card, move a marker. But the decisions! A handful of low numbered Gallantry cards may seem a poor draft, but achieving a lead on the Gallantry board and the ability to move another marker up to three spaces can be incredibly powerful. Do you choose not to select any Jousting cards that come your way and instead focus on Quest cards and the long-game strategy of nabbing those seventeen points? But as any veteran of 7 Wonders will tell you, ignore the threat of losing points at your peril, and so ignoring the Charity or Education  cards may be that stone in your horse’s shoe.

This is a game of inches rather than yards and when you factor in the rule which sees tied markers ruled in favour of the marker on the top, timing is also of tremendous importance. Play a 5 Quest card too soon for example, and you gift an opponent far too many opportunities to leap frog you. In the very last action of our very first game, one of my opponents played a low Gallantry card, but it was enough to push him along the Gallantry board to a point where he could move another marker two spaces. His marker on the Quest board was two spaces behind mine. It was the kind of elegantly devious maneuver one can’t help but admire – with one low numbered card he had robbed me of seventeen points and secured his place at King Arthur’s side.

It’s at this point where I reveal that as much as I enjoyed Medieval Academy, my drafting game of choice remains 7 Wonders, which just has a little more oomph. As challenging as Academy’s decisions are, those in 7 Wonders are just more interesting to me, the strategies more flexible. Academy is more heavily reliant on the card draw whereas 7 Wonders negates a portion of the randomness with its resource trading mechanic. I do enjoy the purity of Academy’s drafting – it’s a genuinely smart game – but I’m inclined to award it Loan status and leave it at that. 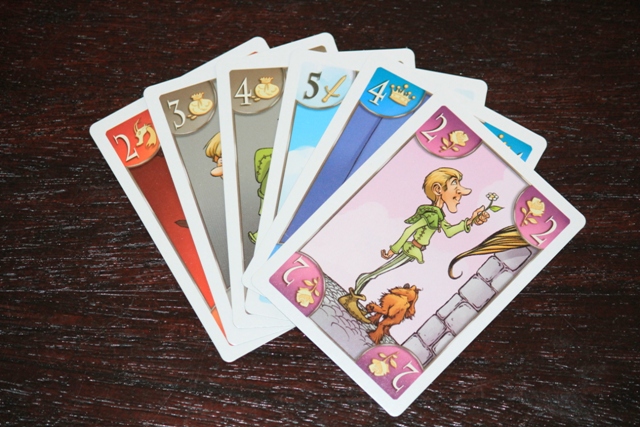 At least, I would have left it at that, if not for two lingering points you should keep in mind. The first is that boardgaming isn’t typically reminiscent of adolescent videogamers arguing about whether Fifa or PES is the premier footie sim. Academy isn’t in competition with every other drafting game out there and is certainly unique enough to sit on a shelf alongside 7 Wonders or Sushi Go. The second and more salient point is that Medieval Academy has some of the best variants I’ve yet encountered.

Ah yes, variants. It does feel these days as if every new title offers some back page variants in an effort to bolster longevity. To be fair, some of these variants often become the preferred method of playing the game, but in my experience they come across more as an afterthought. Which is why I’m delighted that Poncin seems to have actually placed effort into devising a number of additional variants in Academy’s base gameplay. From implementing a drafting mechanic at two players that completely alters the strategy of the draft stage, to the optional Black Knight vs White Knight variant, they all feel fully developed. It helps that box holds additional components for most of these variants and even the base game has Advanced rules. There are nine variants in total and though I haven’t been able to play each, those that I did added bona fide bonus value.

If you enjoy drafting games, you’ll enjoy Medieval Academy. And with its quick play time, high variability and whimsical theme it would be most unchivalrous to render anything but a favourable verdict.

Review Copy of Medieval Academy was kindly provided by Boardgames.co.za for this article.

Medieval Academy is the ideal way for those unacquainted with card drafting to learn how to throw down the gauntlet with the best of them. And if your heraldry can trace a love for the genre far back in your ancestry, this is a crest worthy of being added to your helm.