What is it? A strategic tile-laying game that's short enough to be a thinky filler as well as a lengthier main course? An impressive quotient of variability? A clever scoring mechanic that's both deeply satisfying and challenging to master? Surely Isle of Skye must stumble at some point?

A lively tailwind billowed the sails of the Scottish Chieftain’s boat, its prow shearing through the waters of Loc Muinne. To the North, emerald pastures rose up to greet him, dotted by dozens of sheep. He closed his eyes, building from his imagination the foundations of a kingdom – to the west a mighty stone broch, on the shoreline a great lighthouse, on those grassy hills farmhouses. A rapacious smile played across his lips, his mind focused upon a single thought.

‘I am Duncan McLeod of the Clan MacLeod, and I will bend this land to my will!’ 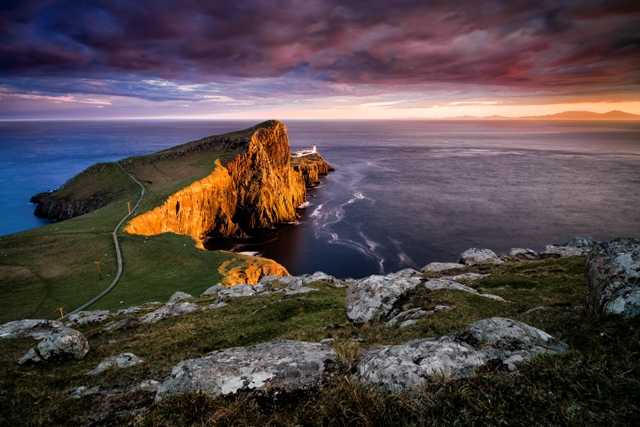 I enjoy a good tile-laying game, but I haven’t exactly played enough of them to even remotely be considered an expert. If pushed to suggest a favourite, I’d be inclined toward Castles of Mad King Ludwig, although Stuart is constantly assuring me that as soon as I play Suburbia this will likely change. Well, I’ve now played six games of Isle of Skye in the space of two weeks and – spoiler alert – we may just have a new contender.

Published by Mayfair Games and set in the quite breathtaking region of the same name, my initial impressions of Isle of Skye were that of a fairly simple tile placement game that might be serviceable as a gateway. And the rulebook does little to change this. But as I quickly found, Isle of Skye is deceptive in its strategic depth, and lurking beneath the sturdy tiles and pleasant if unassuming artwork is a rather cut-throat and challenging game. I suppose I should have paid more attention to the title – when two or more chieftains challenge for kingship, the peaceful countryside is going to get a little noisy.

The rules of the game are incredibly simple. On your turn you’ll draw three landscape tiles from the cloth bag, choose to cull one and set prices for the remaining two. Next you’ll be granted the opportunity to buy one and only one tile from an opponent. Once all players have purchased, if you have a tile(s) remaining you’ll pay the price you set to the bank and take possession of them. Lastly, you’ll add those tiles to your existing tableau, which at the start of the game consists of a single Castle tile, following the standard rules of almost every tile-placement game – mountains match with mountains, lakes with lakes and pastures with pastures. Roads however are exempt. 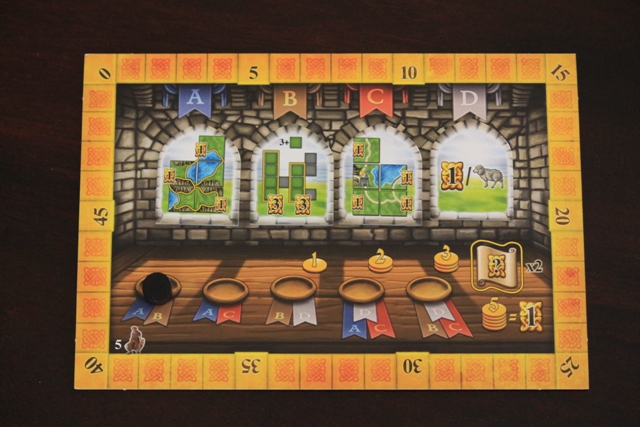 The game board & 4 scoring tiles. In the first round, tiles A & B will score

What then are you building towards? Isle of Skye comes with 16 scoring tiles, of which you’ll select 4 at random during setup. The game plays over six rounds (five rounds with 5 players), and at the end of each round at least two of those tile conditions will be scored (each tile scores three times over the course of a game). So for example tile A awards 1VP for each sheep in a clan territory, but it scores only on rounds 1, 3 and 5. Certain landscape tiles, of which there are 73, also have a scroll icon with a points scoring condition – perhaps 2 VP for each lighthouse in a clan territory – and these tiles score at the game’s conclusion. The player with the most victory points, and please contain your shock at this twist on convention, is the winner.

What could be simpler? And then you start your first round of a 3 player game. You draw your first three tiles, place them in front of your player screen, consult the game board to check the round’s scoring conditions and begin to set prices. Right, so you’ll get 5 points this round if you have the most ships. You glance down at your three tiles, one of which has a farm. The other two have one and two ships on each respectively. Well, this is a straightforward decision, right? You cull the farm tile, since that’s useless, set a low price on the tile with a single ship making it attractive for purchase, and price the remaining tile with two ships high enough to discourage interest and guarantee you ownership. Your opponents have no ships on any of their tiles, which means you’ll finish the round with the most ships and the associated 5 VPs. You place the cull token and the gold coins behind your player screen corresponding to each tile, and once your opponents have done the same players all reveal simultaneously.

You have the first option of purchasing a tile, and it dawns on you that you may have been a little blasé in your assessment of your opponents’ tiles. You notice with a degree of chagrin that one of them has a farm tile with a scroll awarding 1VP per farm at the end of the game, priced at 2 gold. Maybe you shouldn’t have been so hasty in culling that tile with a farm on it. There’s nothing else that fits into your current plans, so you go ahead and buy that tile for 2 gold. As you do so, you also make a quick mental calculation and realise that both players quite probably have enough to purchase both of your tiles. And it plays out exactly that way. The 2nd player nabs that tile with 2 ships on it, and in rapid succession the 3rd player buys the last tile with a single ship. Sure, you’ve got a fair bit of gold for the next round, but you’ve only got one tile to build onto your tableau, and you’re not going to score any points at the end of this round. Disastrous. 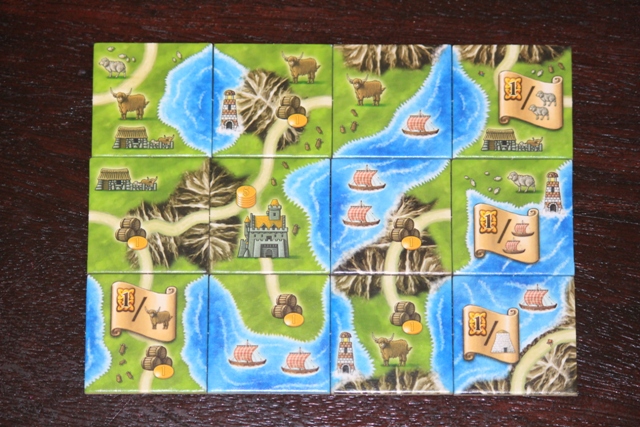 This is pretty much how a typical round of Isle of Skye plays out, and the pace can be a little relentless and unforgiving. There’s a lot to keep track of – what do your opponents’ territories look like? Do you cull a tile because it’s useless to you, or because it will deprive your opponent of points? Do you try to score in every round, or do you build toward scoring high in a select number of rounds? And you have to keep a handle on the amount of gold you keep in reserve. Pricing highly can discourage opponents and increase your chances of keeping the tiles you want, but it’s also a sure-fire way to empty your coffers of gold quickly. This is mitigated though by the ability to increase the amount of gold you receive for each round. Your starting Castle tile provides you with 5 gold, but certain landscape tiles produce 1 additional gold if they are connected by road to your Castle. Purchase and build wisely, and you could be getting as much as 8 gold pieces from as early as round 2.

Many of the scoring tiles grant points for the biggest lake, or the most mountain ranges, which means that it’s also of great importance to pay attention to the actual tile-laying aspect of the game. There’s even an element of press-your-luck! You might be aiming to score a ton of points for the scoring tile that gives 2 VP for each tile in your biggest lake, and since it’s possible to build a lake consisting of 8 landscape tiles (and 16 points is a massive haul) you could hold out round after round hoping for the right tiles. If things go your way, air punches will ensue. But it’s more likely that you’ll fall short of that final tile you need and you’ll have wasted 4 rounds chasing a pipe dream. 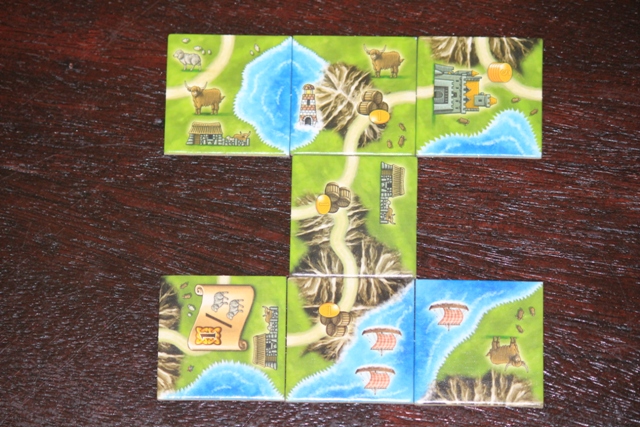 Your tableau is far more likely to turn out like this…

Isle of Skye claims to play from 2 to 5 players, but as most veteran gamers will know, it’s seldom that a game plays genuinely well at those counts. More often than not, the sweet spot is somewhere in the middle and the experience at 2 or 5 pales somewhat in comparison. Fortunately Isle of Skye plays very well at all counts, and in reality provides a vastly differing experience at 2 and 5. I managed to play 2 games with my wife in under an hour, which given the depth of strategy on offer is rather impressive. With 2, it’s pretty much a given that you’ll be building with at least two tiles per round, but it also means there’s less variety on offer and your strategy needs to be laser-like with little room for adaptation. At 5 however you’ll have the option of purchasing one from at least 5 landscape tiles each round, which gives your strategy greater flexibility.

It’s not all fertile pastures and majestic azure lakes though. Isle of Skye attempts a rubber-banding mechanism to prevent a runaway winner – starting with the 3rd round, players receive additional gold for each player ahead of them on the scoretrack, but in reality this barely impacts the game. Not that this is inherently a negative, after all why should players be afforded a chance to catch up if they haven’t been playing as smartly as you have? In most of the games I participated in, the winner finished in front by a country-mile. Could the rest of us have prevented this? Perhaps, but playing to deny the leader doesn’t directly reward you, so the incentive to interfere with their plans is lacking. This isn’t necessarily a negative, but it does seem to indicate that the winner is clear from at least two rounds before final scoring. This will become a familiar view all too quickly. The axe indicates the landscape tile to be culled

Isle of Skye also suffers from the problem of chance impacting upon the game far more than it should. You’d expect that the randomness of the tile draws would, on balance, even the distribution of luck and for the most part it does. But it’s entirely possible that a single tile could swing things in favour of the player lucky enough to draw it and price it out of reach. The rulebook is to the point and easy to follow, but I’d have appreciated a more in-depth explanation of the scoring tiles. The back of the rulebook does take the time to explain each scoring tile, but after numerous plays I’m still not sure I understand all of them. And when consulting the BGG for clarifications, this was a common complaint.

But it’s important to keep in mind that I also believe these minor criticisms are likely due to the inexperience of those playing. Isle of Skye is the kind of game that shines the more it finds its way to the table. I predict scoring will be far tighter when everyone involved has at least 3 or 4 games under their belts. This is a genuinely great little game that found a way to surprise me at every turn. Simple enough to absolutely be a gateway game and yet challenging enough to hold value for the more demanding gamer, Isle of Skye scores impressively through a lengthy checklist.

Review Copy of Isle of Skye: From Chieftain to King was kindly provided by Boardgames.co.za for this article.

You may have noticed I've avoided using a specific word for the duration of this review. That word is Carcassonne, arguably the most widely played tile-laying game around. And I'm likely not to use that word ever again, since I'd rather play Isle of Skye. Every time.