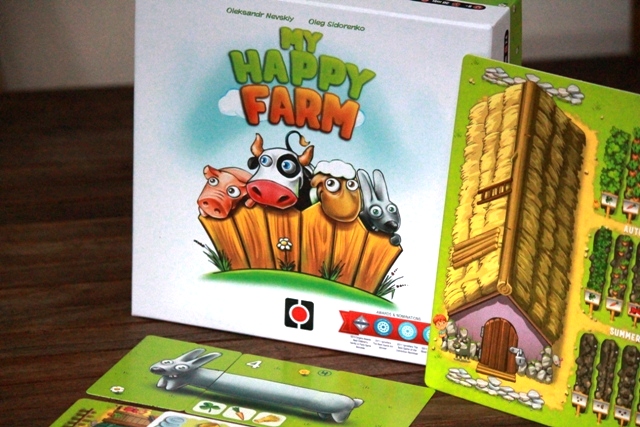 What is it? Originally a Ukranian release but now reprinted by Portal Games, My Happy Farm distills the complex workings of the ubiquitous agrarian Euro into something a less mature palate might enjoy. If Caverna is a wider-bodied and oaky Chardonnay, My Happy Farm is a lime milkshake. Shut up, lime is totally the best milkshake flavour.

I’ve discussed boardgames aimed at kids before, the joy of being able to share your passion and how impressive a teaching tool they can be. It’s been plenty documented how the digital age has transformed the experience of being a child of the new millennium, but there’s something about the inherent curiousity of childhood that connects kids to boardgames in an incredibly potent manner. It’s rare that either of my kids show much interest if I’m in front of the computer, but the minute components of any sort hit the table, there’s a flurry of eager questions.

Once they break through the 9yr old mark, options become rather plentiful. Many of our favourite games as adults translate well, and with a guiding hand and a few rules explanations it’s not difficult to get Mice & Mystics or Smash Up or King of Tokyo to the table. And more often than not, get beaten at all of them. But at the more junior age, the selection tend to lean more toward games of dexterity or games that are wholly luck-based. Understandably, since at such a young age there may be limits to what kids can either read on the components, or what concepts they are able to grasp effectively enough that it’s not an exercise in frustration. But wouldn’t it be great to have a Euro your 6yr old would not only play with you, but actually enjoy?

Well friends, the Dice Gods look favourably upon you and it pleases them to introduce you to My Happy Farm! Quick, charming and nary a die in sight – if you’re serious about bringing future acolytes into the fold, adding this to your collection is the very definition of a no brainer. But if you need convincing, then please read on. 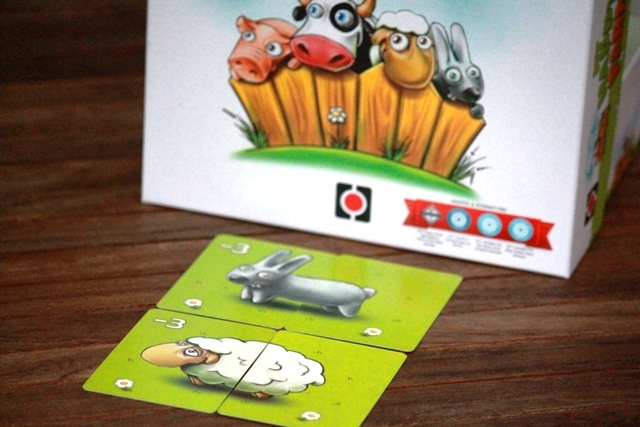 And On His Farm He Had Some Pigs…

Things don’t begin on a happy note, despite the game’s cheery disposition. Your animals are hungry, and hungry animals are unhappy animals. And just to drive the point home, the faces of your pig, sheep, cow and rabbit will be staring forlornly back at you for at least the first two rounds. All players begin with those four animals depicted on two cards each, one for the front half and one for the back. It’s the front half’s whose pleading eyes tug on your heartstrings – but don’t fret, the aim of the game is to acquire feeding cards which slot in between, not only stretching your animals (which is apparently a good thing?) but the first time they are fed, you can literally turn that frown upside down. Or in this case, flip the card revealing a visage of deep contentment.

How do you feed your animals? Well with seed cards of course. Each turn, players may perform 2 unique actions from a choice of 6:

Seeds are bought from the marketplace with 6 cards always available in the marketplace, and once acquired can be planted in the Spring section of your player board – either a single seed, two different seeds, or three of the same kind. Harvesting requires removing all certain crops from one of the two Summer and Autumn sections of your player board, namely Spring, Summer and Autumn, which are then stored in your barn (room for 6 harvested crops). If you’ve harvested crops that match the requirements of a feeding card you discard the cards to feed your animal. Seed cards all have a monetary value, discard to receive that many coins from the bank. And if you really have no options, you can take a coin from the bank, though this action was never chosen in the six games I’ve played. 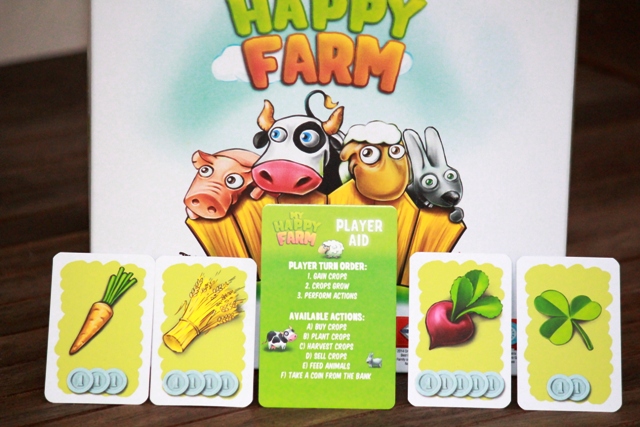 The interesting twist arises from the crops grow action which happens automatically at the beginning of each turn. Any existing crops in Spring or Summer move up to the next season, while any crops in Autumn that would move off the board are discarded. This, in conjunction with the fact that you can only harvest certain crops in Summer and certain crops in Autumn means that future planning is really the crux of the game, and the aspect which is going to be the most interesting for kids to grapple with.

Who wins? Each feeding card is worth a number of points that coincides with the number of crops required to claim it, so for example a card that requires a clover, a carrot and hay may be worth 4 points, but one that requires two beets, two hay and a clover may be worth double that. You may be tempted to snatch up all the high scoring cards, but each unfed animal is worth -5 points at the end of the game, so players really need to calculate the risks. Once the feeding card deck is cleared, players get one more turn. Players with the best fed animals get 3 bonus points, tally up and most points wins. 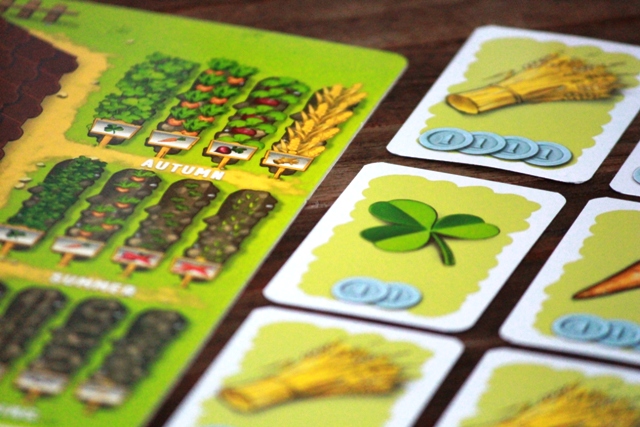 My Happy Farm is the epitome of reaping what you sow, literally and figuratively. Investing your time will ensure your kids nurture a love for boardgaming, investing their time will not only make them better at the game, but will teach them how to formulate a long-term plan and to select the best choices in pursuit of that plan. It helps that the experience is actually a pleasant one for parents too. My eldest enjoys Catan Junior, but I find the experience to be a chore and as much as I may feign enjoyment, I have no doubt she can tell I’m not having the time of my life. Not so with My Happy Farm, by a long shot. Sure, it’s not a game I’d play with my group as even a filler, but there’s enough meaningful decision-making happening to keep me engaged and beyond, that seeing your child getting to grips with strategy is tremendously satisfying. 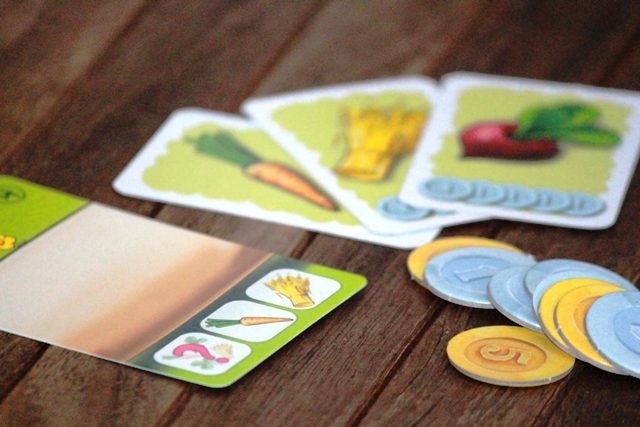 The components are great, from the slightly quirky art-style, the token coins and the player mats which each have slight differences in the artwork, to the seed and feeding cards – though I would suggest if you see the game getting a ton of play with your kids, perhaps look at sleeving the cards. At 4 players though it can be a bit of a table creep so I’m not sure I’d call it comfortably portable unless we’re talking family holiday time. And you could certainly try MHF as a filler for your game group or perhaps a gateway, but I wouldn’t.

It's one of the easiest recommendations I've had to give - if your kids have been playing with you for a while they may find this too light, and there are likely better games for ages 10+, but as a 10 and under game or as an introduction to the hobby, My Happy Farm needs to be in your collection.