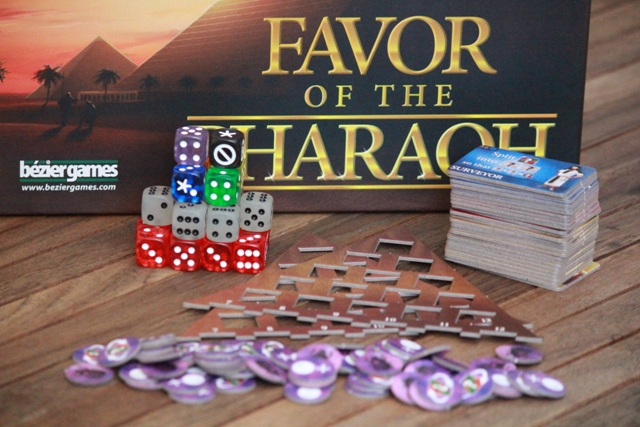 What is it? I imagine King Tut, ornate headdress in the middle of the table, his icy glare offering no hints as to the cards in his hand. But I've got a straight I'm certain he can't beat. My only problem? I've got nothing to beat that's even remotely as valuable as that headdress. 'I'll owe you a favour?' I say, and he nods his head. A smile plays across his lips, as devious as it is ancient.

Yes, there's a Pharaoh. Yes, there's poker. But is Thomas Lehmann's Favor of the Pharaoh a royal flush?

Given the popularity of the Yahtzee mechanic in many of the hobbies current most popular titles, you’d be forgiven for assuming it’s always been that fashionable. But a decade ago it was very much an interesting concept that had yet to have a King of Tokyo moment – like hearing an edgy guitar riff in your head and then trying to insert it into an existing song, often the result is jarring and renders the experience unlistenable. 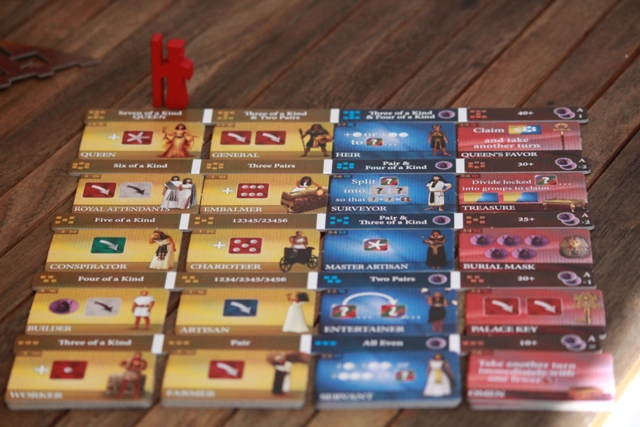 Typical layout, with the Level 7 bar at the top

Enter not-quite-yet household name Thomas Lehmann and his game, To Court the King. Generating a fair degree of buzz when it was announced and early favourable reviews, as the years have rolled on I think it would be fair to say that it holds a place of respect because of its innovative approach – the gameplay itself didn’t hold up quite as well. Questions were raised about balance, that a particular strategy would triumph more often that not, that there was actually too much mitigation of luck.

Lehmann actually designed a number of expansions with the aim of injecting the game with better balance, but unfortunately those expansions never saw the light of day. Now, with Race/Roll for the Galaxy and a guiding hand in the Pandemic series, Lehmann has had a chance to breathe new life into what I’m sure must be a title quite dear to his heart. It might have a different coat of paint, but Favor of the Pharaoh is still very much the engine of To Court the King. The question that needs to be answered though, is Favor simply a flashy body kit concealing a creaking engine? Or has that old V6 been transformed to a supercharged V8?

Did Ancient Egypt’s social hierarchy inspire the Pyramids, or did the Pyramids inspire their social hierarchy? With slaves and labourers making up the plentiful foundation, it’s a narrowing climb up through scribes and high priests and viziers before you reach the apex of Pharaoh. But can the system be ‘gamed’? Can a mere mortal unlock the secret of influencing Egyptian society and ingratiate themselves into the Pharoah’s favor? 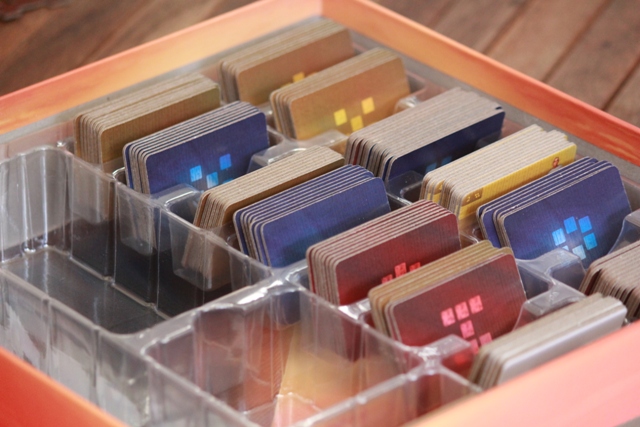 It’s a great insert, but it’ll take you a while to figure out how to store the tiles

As most credible Egyptologists will tell you, the secret to doing exactly this is dice. Loads of dice. Red dice, clear dice, yellow dice, orange dice, blue dice. Not quite Roll for the Galaxy levels of dice, but plenty of dice nonetheless, which you will roll and manipulate to work your way through the highest tiers of Egyptian society until it’s not just indentured workers and farmers you have at your disposal, but royal astrologers and priests of the dead.

Lehmann has done has best to to give Favor flavour, but honestly the theme is largely irrelevant, as it was with To Court. It’s a race up the ladder and while everyone is running, no one’s going to be paying theme much attention. Where Favor does shine is in component quality. The art work, whilst being perhaps a shade generic is still attractive, the card stock is excellent, the dice are sturdy and the box insert has a robust tray for easily organising all the tiles. If anything, one might argue that the quality ultimately hurts the game, but more on that later. 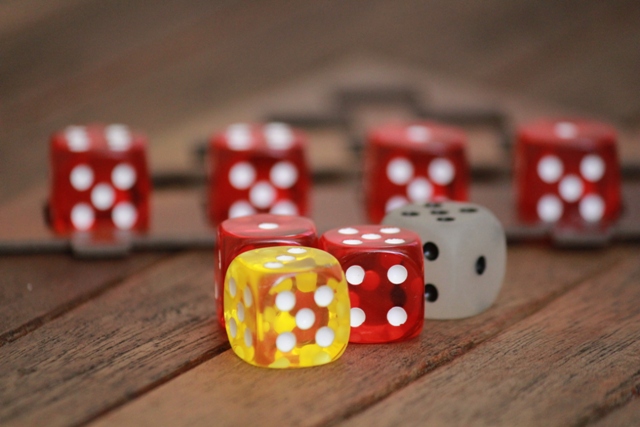 Favour’s 4 page rulebook is your first indication that learning the game is far simpler than puzzling out ancient hieroglyphics. Five Level bars placed in descending order, tiles assigned to the bars at the levels indicated, Scarab tokens flipped face-down in a general pile, and you’re ready to go. Players each start off with 3 red dice, and will be able to take one tile according to their roll result. The first Level bar requires a result from three dice, so you may need to roll three of a kind or all odd dice or the total of your roll may need to exceed 15. The Level bars increase in difficulty, culminating in the Queen tile which requires a roll of seven of a kind.

How does one get from 3 dice to 7? As you claim tiles, they will provide special benefits such as allowing you to roll an additional die or granting pip manipulation powers. Once a player has successfully claimed the Queen tile, that roll essentially becomes the bar to beat. If they’d rolled seven 4s for example, each player will have one opportunity to beat that result (seven 5s, eight 1s etc). If unsuccessful, the player who claimed the Queen wins. If however another player does manage to exceed that roll, the owner of the Queen gets one last chance to beat the new highest result. Simple enough? 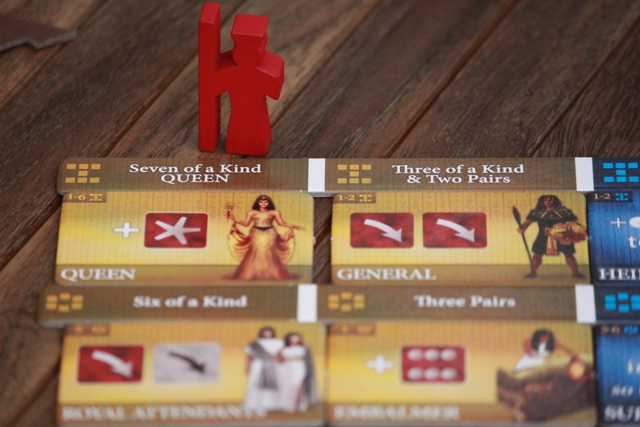 Well, no. Not simple at all really. Because those dice, those fickle luck goblins who will turn on you in a second. Unleashed upon table or dice-tray their pips glaring back at you, sometimes like the most beautiful eyes you’ve ever seen, but more often gleaming with demonic mischief. Each time you roll, at least one die needs to be locked in (which you do by placing it into one of the slots of your player Pyramid). You continue rolling until all dice have been locked, at which point you choose a tile based on your final result. The trick is of course that you may roll two 3s, lock them in hoping to roll a 3rd, only for the final die to betray you and roll a 4. Your options in the first Level are three of a kind, all dice ≥ 4, all odd or 15+, and you’ve screwed yourself out of acquiring a tile.

What Favor does with such finesse is to toy with the way your brain copes with probabilities. Those two 3s you rolled are so obviously meant to be locked in that you forget how unlikely it is your final roll will show that extra 3. And it doesn’t help that all the tile powers are so attractive. Often games that rely on choosing between variable player powers will struggle to find the balance – certain powers end up all but useless whilst others become a must-have every game. I’m delighted to report Lehmann has absolutely nailed that balance. The Guard guarantees a 2 result on each turn. The Palace Key is a once-off effect that let’s you roll an extra two dice. The Master Artisan allows you to adjust the face of one die to any side. Given that there are 55 different Tile powers, only 21 of which are used per game, you’re looking at an impressive amount of variation from game to game. 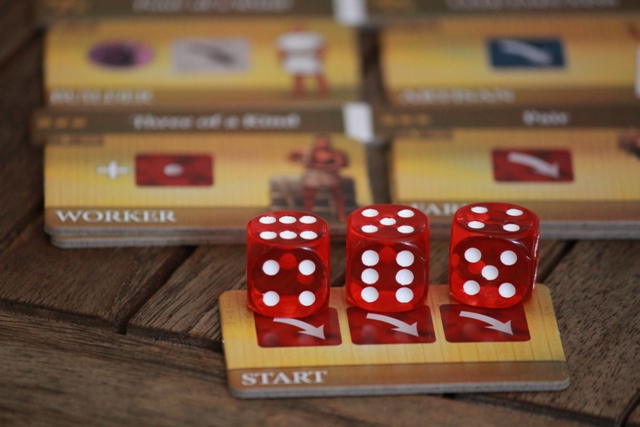 Your measly 3 starting dice. Little do the know what great things are in store…

And that variation impacts not just the options on offer, but the style of the game as well. Our first game was a rather quick affair, the tiles on offer all matched a wide variety of roll results so they were snapped up every turn. But as I found with our second game, acquiring tiles can prove a precarious proposition and we had a number of rounds in which no tiles were collected. Which brings my nicely to the introduction of the Scarab tokens. If ever you are unable to collect a tile thanks to those tricksy dice-goblins, you may take two tokens which allow you either to increase a die result by one pip, or to reroll a single die. And don’t for a moment underestimate the efficacy of these tokens – you’ll likely find at the end of any given game those tokens have been consumed as voraciously as the only bowl of biltong at a games day. 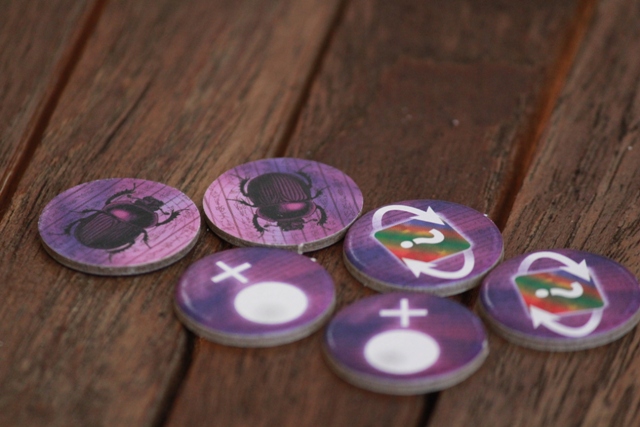 The only time lots of Scarabs is a good thing

Favor of the Pharaoh is a worthy successor, there’s no denying. Each turn is a an intricate puzzle, figuring out the right order to activate your powers, assessing probabilities and knowing when to throw caution to the wind – it’s a Rube Goldberg machine that ends either with the raising of a colourful flag or a domino that just won’t fall. The end game may seem a little odd at first, surely the first person to claim the Queen tile should be the winner? But what you’ll find is that the roll off actually adds delicious tension to the game and snapping up extra tiles in lieu of the Queen actually becomes a valid strategy in itself. The extra dice all have interesting pros and cons – for example the white Immediate dice must be locked in after the first roll, but they’re easier to get in the early game.

The game isn’t plague-free, although nothing as serious as raining frogs or rivers of blood. Down time between turns is directly proportional to the presence of Analysis Paralysis. While not too noticeable with two players, this could become vexing when playing with four. Since you have no idea what tiles will be available on your turn, long-term planning is extremely limited. The only thing to do is, and this is an element I wholly enjoy, smacktalk. That’s the only time you can sit back and marvel at the dice-goblins dastardly dance, so revel in it. 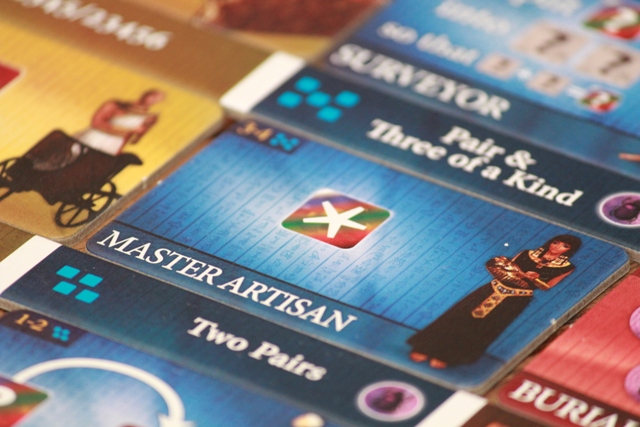 Two suggestions if you do decide Egyptian society could use a shake-up: download the app which randomizes the game set up for you, and store the tiles according to colour and Level – it makes the game a lot quicker to set up, though I do wish Bezier had included a storage guide. As for my comment on the game being a little over-produced, this correlates directly to the cost. It’s all fine and well to see such great component quality, but Favor is very much a filler-style game attached to a distinctly not-filler price.

At least, I think that’s what the majority of gamers will see it as. But the filler category is more than just about games that play quickly. I certainly wouldn’t call 7 Wonders: Duel a filler, and I think looking at Favor in that light does it a disservice. I’ve been searching for a game to fill a particular gap in my collection for a while now, a game that let’s the dice hog the limelight at every turn. I’ve gone through a few that riffed off of King of Tokyo’s Yahtzee goodness, but diverted along a more Euro-inclined path. Ultimately, games such as Machi Koro proved just too light and so that gap in my collection remained. That is, until I learned to walk like an Egyptian.

With thanks to Boardgames South Africa for the review copy

I went into Favor of the Pharaoh really hoping it would be as good as the previews had led me to believe. I had concerns that it might be a case of the Pyramids being less impressive up close than they are on film, but fortunately my worries were groundless. I adore the dice manipulation, the variation on set-up, learning which powers combine more effectively. I've seen it called Dominion with Dice quite a few times, and I can't thing of better praise.