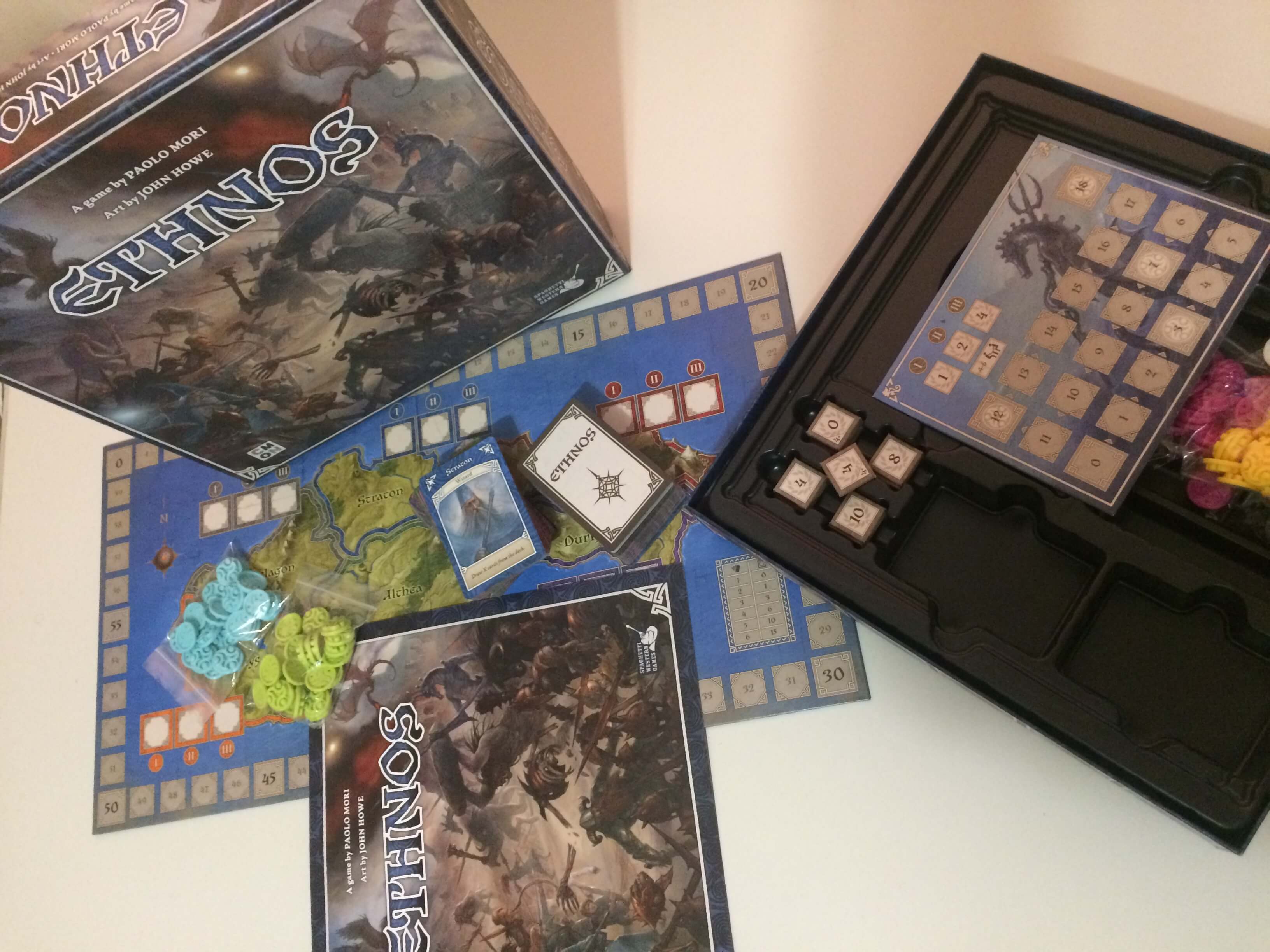 What is it? Assemble your hordes! Minotaurs, Merfolk, Giants and Trolls all wander the world of Ethnos, but who can lead them to dominion over the provinces? We look at Ethnos, a simple to grasp rummy style set collection game where each different combination will have you overthinking your choices while speeding through three ages to determine the ruler of Ethnos. Not all creatures are created equal so manipulate your bands of troops to wrestle control over the land of Ethnos.

Every once in a while you open a game that you feel you understand immediately. It all feels very familiar, the sense of drawing cards, assembling sets and playing them for points. It’s the game you played with your parents and for many of us the first introduction to the mechanics of gaming; drawing cards and matching elements.  But this only kept you interested until you were 12, so we’ve added twists to change the way you collect, with unique card powers, the inability to hoard cards and an element of region control. Welcome to Ethnos, the rummy-style game you wish your childhood had.

In Ethnos, players are competing to assemble armies of mythical creatures and deploying them to the various provinces to lay claim for your stake in the battle for control. Each band of creatures you deploy will add a control token to the province and the at the end of each age, the player with the most control markers in a region will be the only player to score the allocated points to that region for that particular round. At the beginning of the game, each region will be allocated a random point value for both the first and second ages, meaning that lower value regions in the first and second ages may well be the highest value region in the final act of the game. Similarly, deploying the largest bands to the map will also net you the highest number of points as the citizens admire your armies parading into their regions in your honour. A band of a solitary unit will not impress your might upon the locals but a horde of 6 units will be a grand showing of your power. 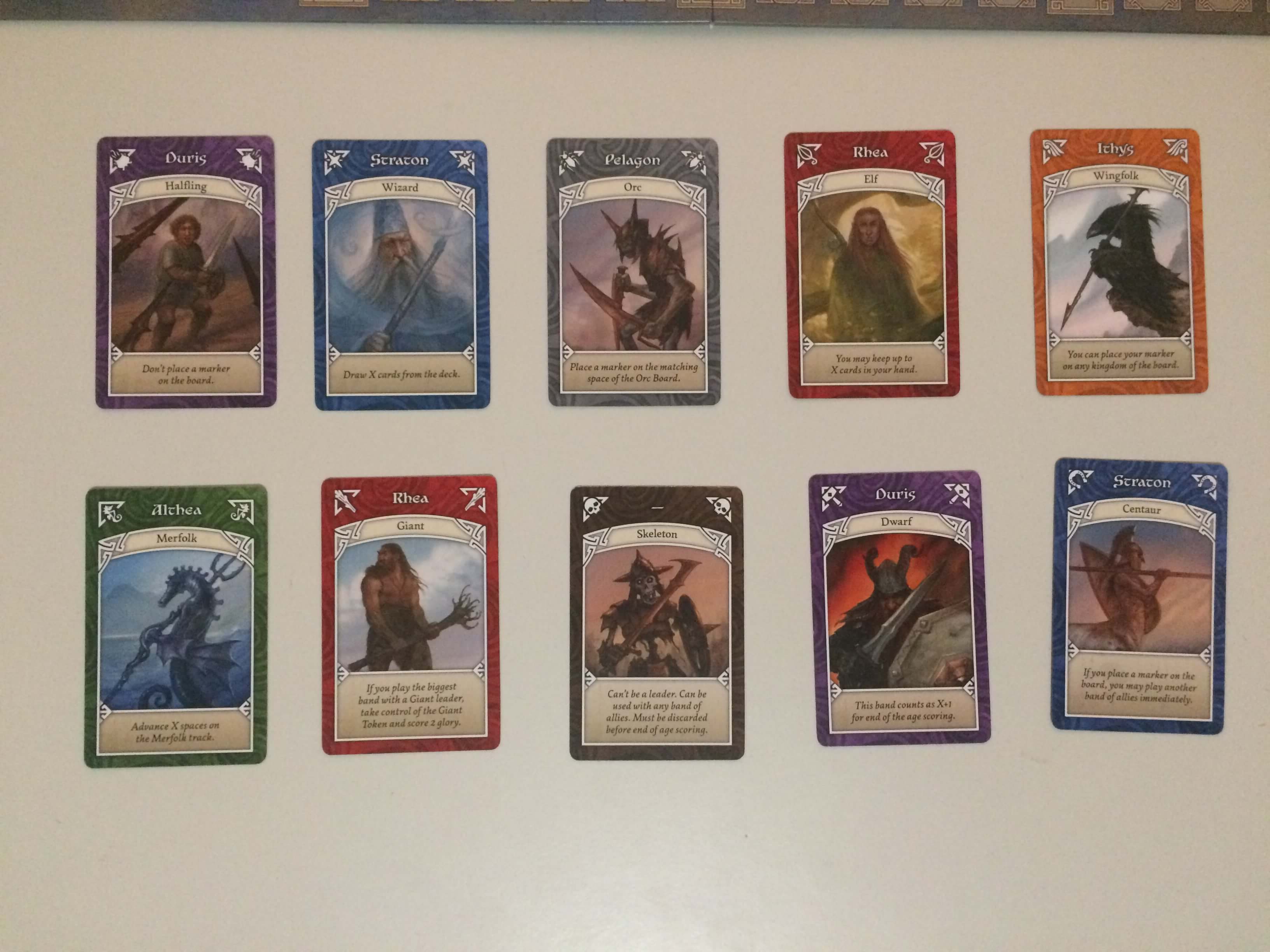 At the start of the game, you’ll create a draw deck by combining 6 of the 12 decks of mythological creatures. Each player then will get to draw a single card as their starting hand and then play will begin with the starting player. On your turn you’ll simply choose one of two actions; draw a card or play a band. Each card in your hand has two identifiers, namely the creatures race and the region of Ethnos that it belongs to. In a rummy style mechanic, players will need to form sets of cards in their hand to form bands matching one of the two criteria, either all of the cards must be of the same race, or all the cards in the band must be of the same region. When you play a band meeting one of those two criteria, then the card you choose to be your leader will either designate the race ability that you wish to invoke, or the region that you wish to deploy you marker to for increased presence in that region for area majority. 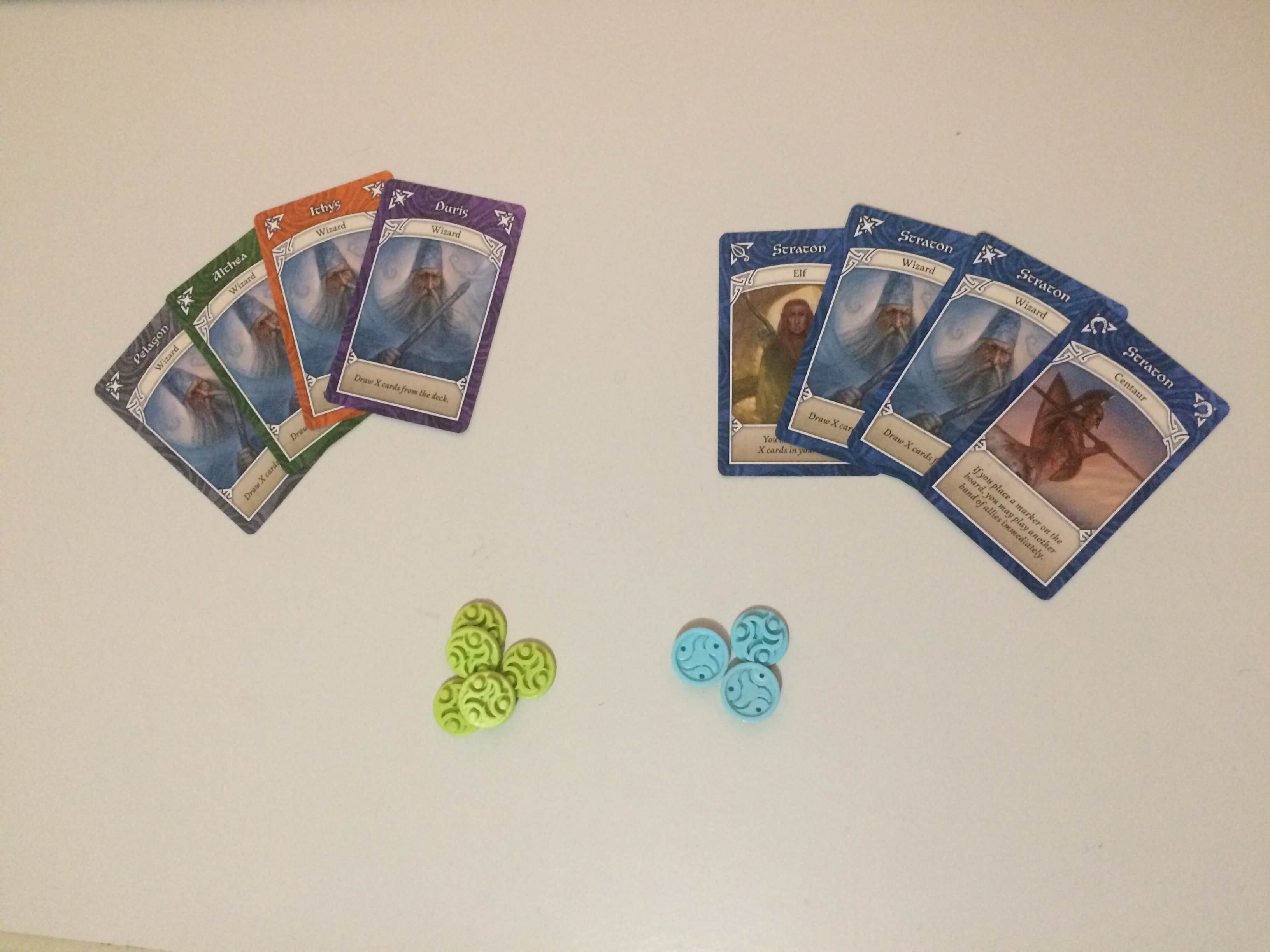 The races are where the strategies, variable gameplay and that depth of tactics come in, with each race ability steering your recruiting choices in specific ways. Halflings breed like rabbits and are numerous in number having the most cards in the deck of any race in a game, allowing you to easily build those 6 card combinations for maximum points, but they don’t add any markers to the board for area control because no one takes a halfling seriously. The Winged Folk allow you to place your area control marker in any region of the board of your choosing, the Dwarves score your band as if you have 1 more card in the band than you actually played, the Giants score you additional points each time you play the largest band of giants and lay claim to the Giant marker which is worth additional points at the end of the round, and centaurs allow you to play an additional band that turn, which is crucial because of the next rule that really shakes things up in Ethnos. 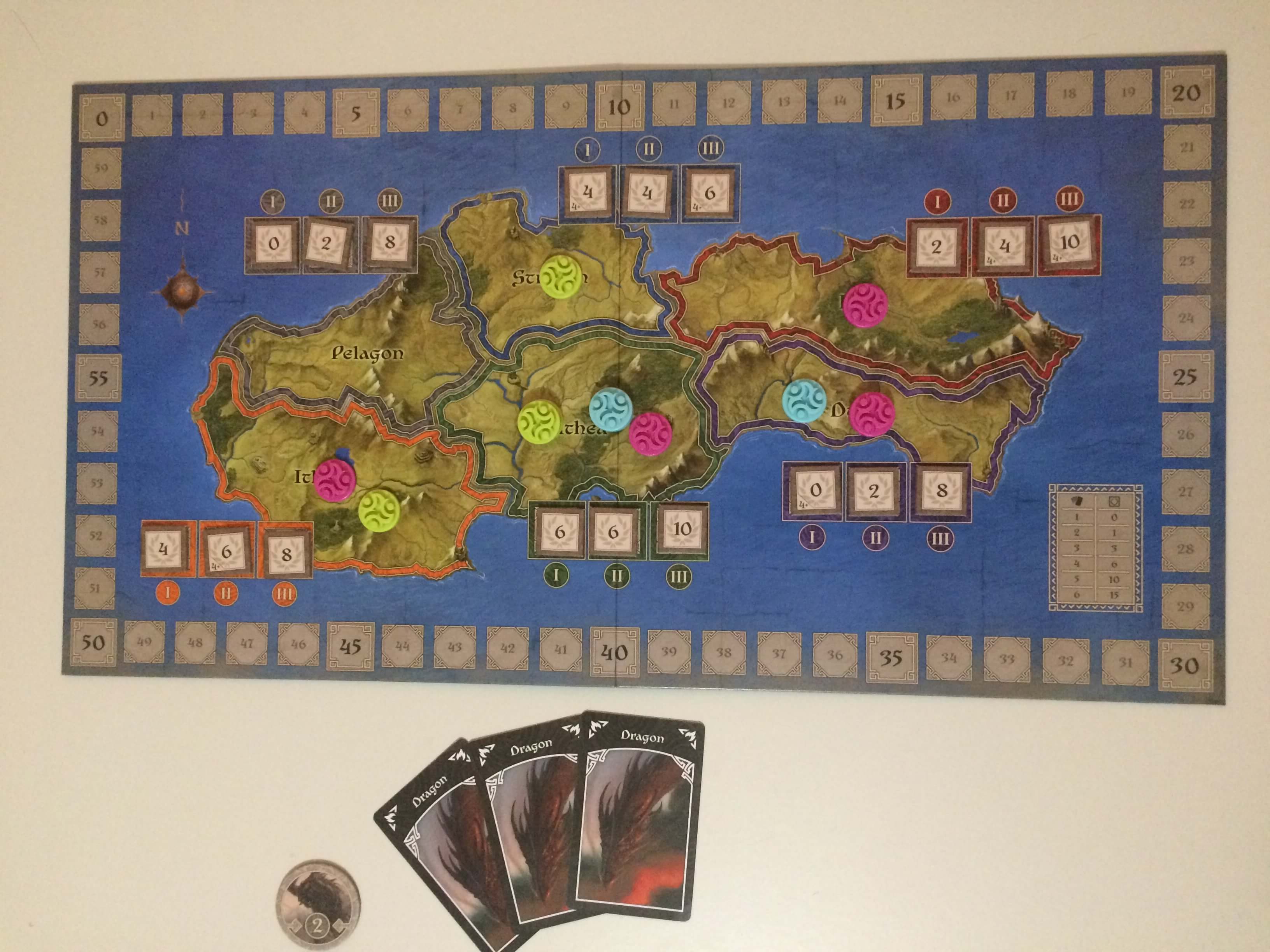 When playing a band to the board, any cards which you haven’t played that round are discarded to the common card pool in the centre of the table, allowing other players to feast off the scraps of your recruitment. Had to choose between a band of 4 Dwarves and 5 Giants, choosing to recruit the Gargantuans for control of the Giant marker? Then those Dwarves are all abandoning you and heading to the central pub for a pint where your opponents (who loves Dwarven cards by the way) are going to pick them up on their turn and by the time you’re building up your hand again, you’re blind drawing from the deck and cursing. This mechanic makes you weigh up each choice; which region is more crucial? which race is going to score you the most points? Do I draw that extra card hoping to get to that magical 6 band of Halflings or play what I have already? You’ll have to make all of these decisions quickly because as that draw gets thinner and thinner, the dragons become restless. 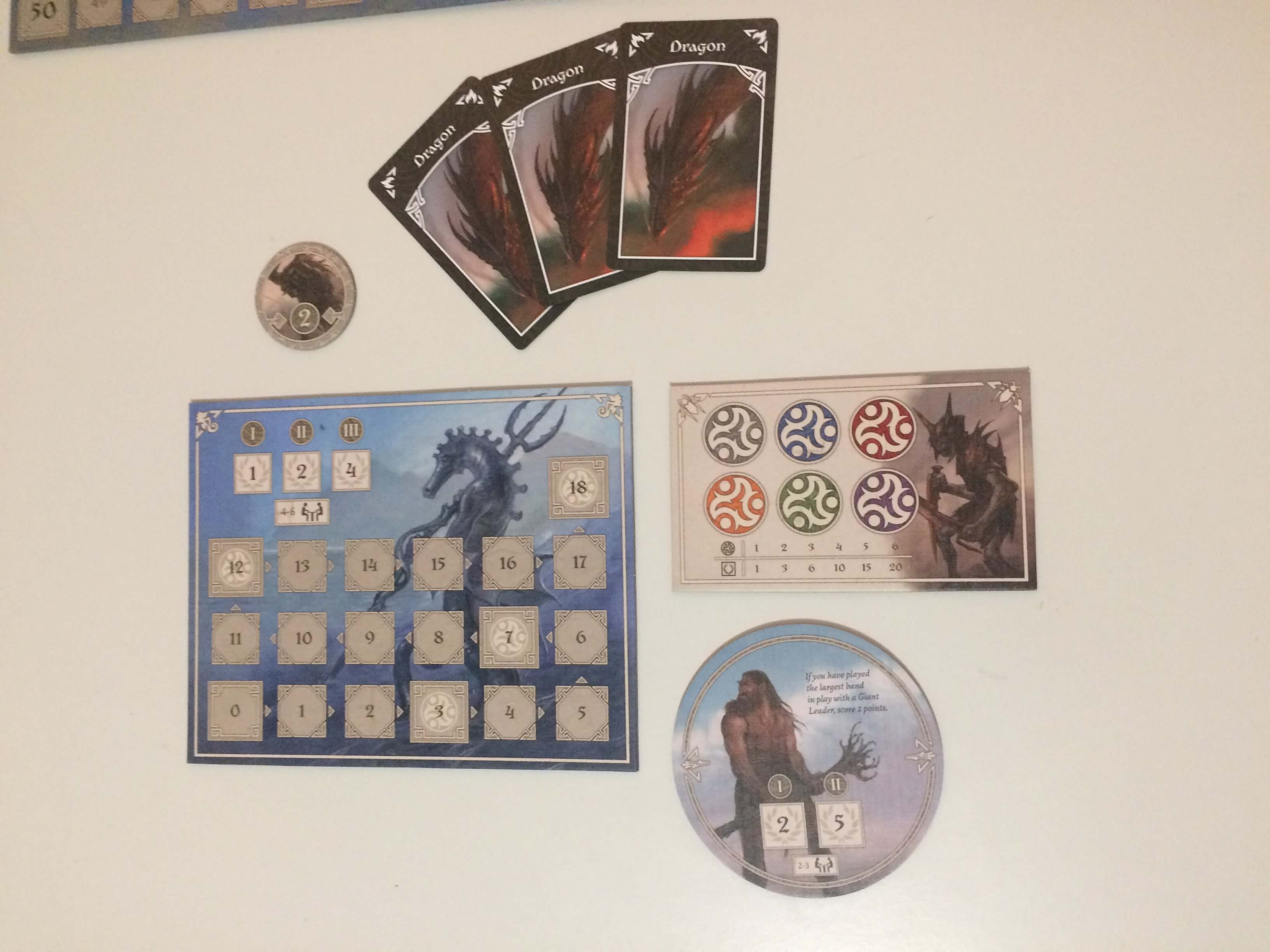 And that’s important because when the third dragon card soars out of the deck after being drawn from the bottom, half the age immediately ends and players will score their bands and regions, rendering all the best assembled troops in your hand worthless.  There is a interesting level of push your luck mechanics that we loved in Clank! and cursed in Dead Man’s Draw and it brings about that end of age excitement that you don’t expect from the game. At the end of the first round, you’ll tally up unique creature points (such as Giant Token control, and Merfolk leads), points for bands played through the age and the points for control of the various regions according to the scoring for that age. All cards are shuffled again to form the new deck, however your area control markers will remain for the rest of the game, making area control an engaging mechanic for the full game with long term rewards to balance with the allure of short term band size points that you can gain. Needless to say, like almost all board games, the player with the most points at the end of the third age is declared the ruler of Ethnos.

I love Ethnos for so many reasons. I adore that I’m able to explain to gamers and non gamers alike within 15 minutes and have everyone know what they’re doing by comparing it to rummy mechanics that are simple and intuitive. The game is almost void of any downtime, with turns going around the table and keeping everyone involved. You’re constantly watching who is trying to wrestle control from you in a region and who is hording cards, offering the delicious pinata of card candy popping whenever someone plays a band. You’ll weigh up the pros and cons of the different races, with each seeming to be overpowered but when played in certain combination can be wielded by all at the table. You’ll fret over pushing towards the end of the deck when two dragons are already out and do you really want that last card or should you just play that last song for the band? 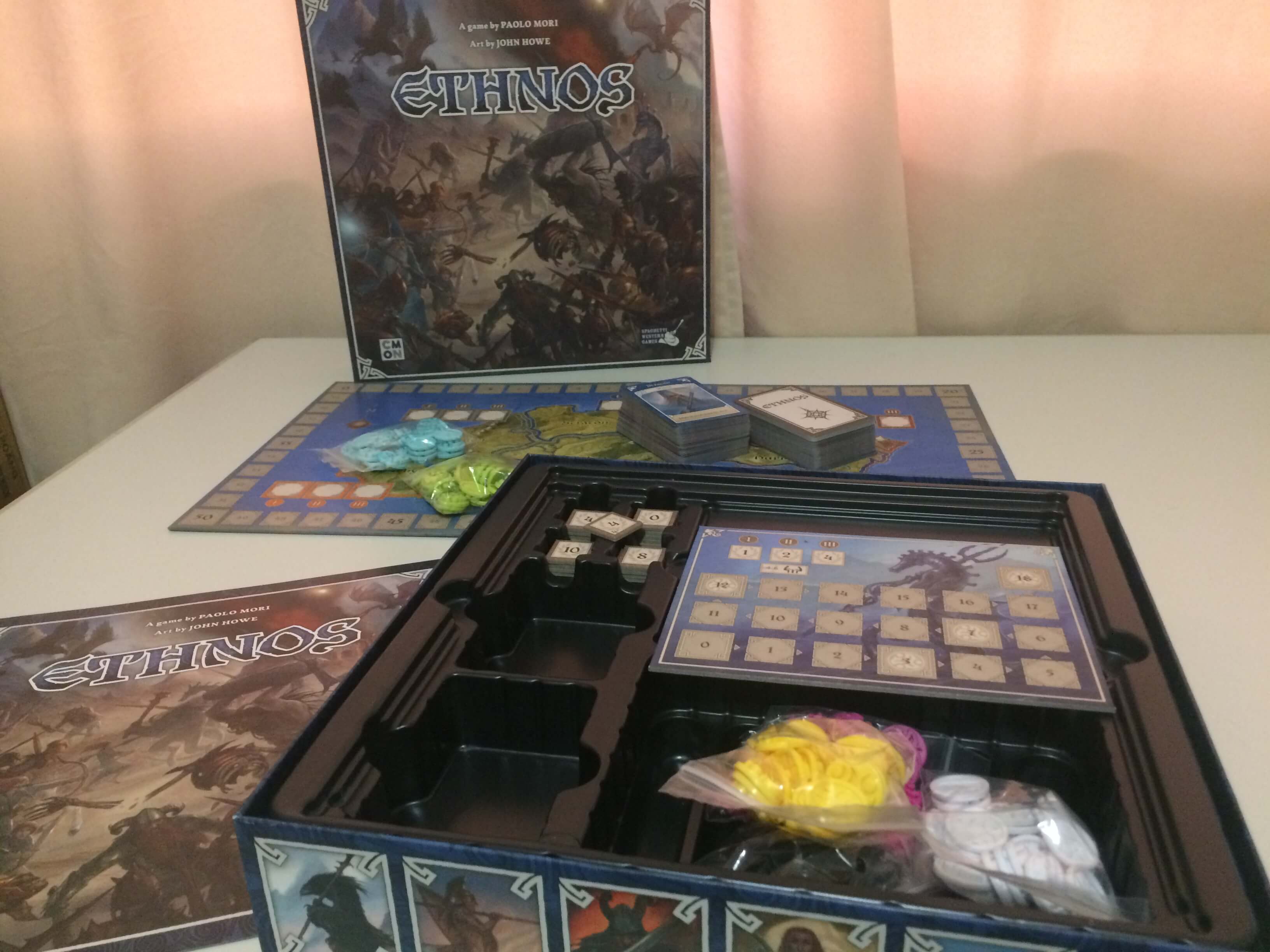 Sadly, for a mythical world with mythical armies the theme is the one string on this harp that rings a little flat. The race powers in many cases make very little thematic reasoning (I made up the bit about the halflings) and by midway through the first age you’ll be looking at it more in relation to colours and abilities than thinking of a band of dwarves and why you’d get an extra card value in the band. It really doesn’t make any sense. While many would bemoan the art, I had no issues with it but just felt that the theme was really a missed opportunity with almost any theme being an option and was disappointing that we ended up with generic fantasy. While it doesn’t break the game in any way whatsoever, there surely could have been something more interesting than the choice made.

Despite the complaint, Ethnos may well be my “game that everyone should play” in 2017 so far. Simple yet deep and rewarding choices, excellent in all player numbers and without any additional time per player, variable strategies and the variation of these due to the random combinations of races at the beginning of the game make this a title that is great for both gamers and families alike. You’ll agonise over choices, push your like for that last band to play your victory theme and love your time in the world of Ethnos.

Ethnos has become my new gateway game to share with new players and at the same a game that I enjoy playing with my competitive group as well. With so much variety in the different mythical creatures combinations, the dual game of area control and large set collection groups and really simple push your luck mechanics, everyone will enjoy a game of Ethnos if they enjoy board games, however its such a pity about the generic theme.