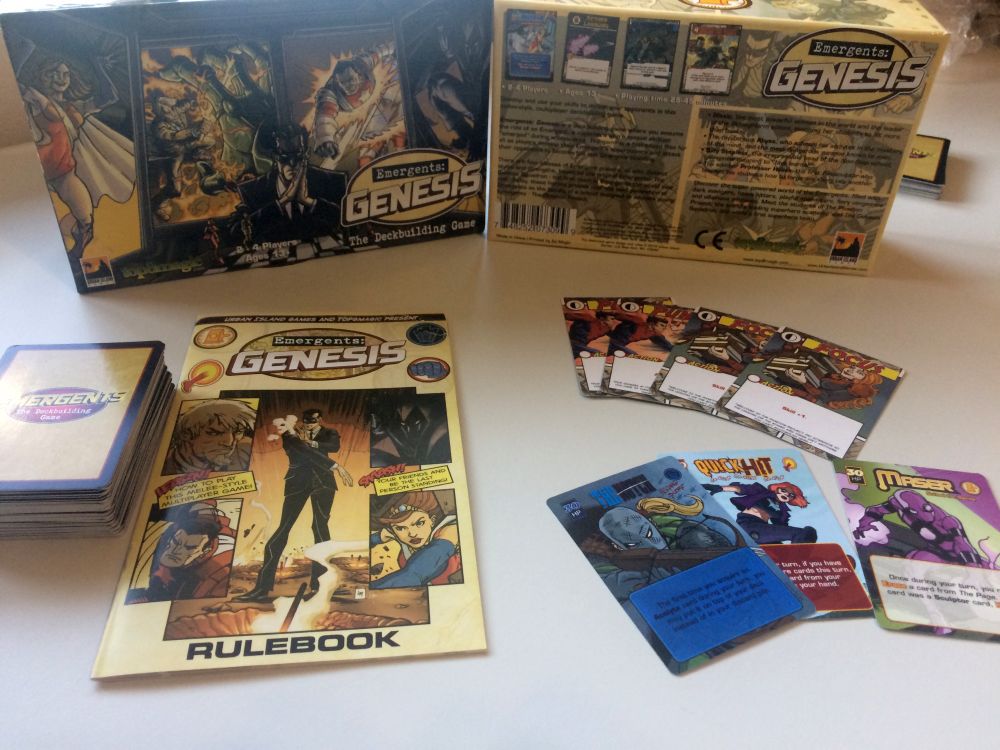 What is it? With so many heroes out there, who would you call when you want to sit down for a deck building game of super powers? We look at Emergents: Genesis to find out whether focusing to study new abilities or simply punching your way through your opponents will leave this card game standing triumphant over our expectations.

My introduction to modern board games was a deck builder. Not just any deck builder, as Dominion was the holy mother of the genre, with expansions still being released each and every year. The methodical mechanics of developing your play style and your character appealed to me when I began in the hobby years ago and now, as a staple genre in the hobby industry, it takes something a little special to make your deck builder different from the rest. Star Realms wow’ed gamers with its low price point for such a complete product & Paperback combined scrabble with deck building to create a unique play experience, both of which are games I cherish in my collection. So when Matthew sent us a copy of Emergents: Genesis, a super hero style deck builder, my first thought and query was: What is this game going to offer that’s different?

Emergents: Genesis is a deck building super-hero themed game for 2-4 players where each player chooses from one of thirteen unique Emergents to take part in a battle to prove yourself the victor. Heroes will start with the standard deck of 12 cards, 9 of these being Focus cards (the currency with which to acquire new abilities) and 3 punch cards (cards which deliver damage to your opponents). Each round, players will draw 6 cards which they will play in order to generate focus to acquire cards from either the Page (a marketplace of 6 cards that are constantly replaced from a draw deck) or from the Panel (A selection of 4 piles lower level strength cards that are always available for purchase), or to use the damage to whittle down their opponents health from 30 to 0. When only one Emergent is left standing, that player will be declared the winner. 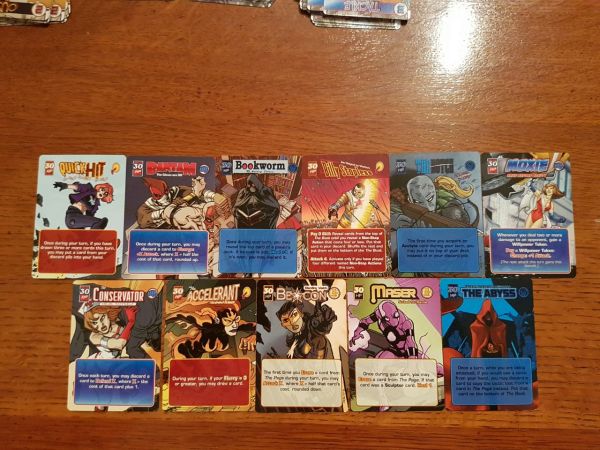 Each Emergent of the 13 has a predisposition to a certain fighting style, which also reflects the major types of cards that you will be able to purchase throughout the game from the Page and Panel. Acolytes are masters of manipulation and trickery, often using counter-measures to deal with their opponents, Non-Stops are able to draw cards and get through their decks to access powerful ability cards more readily, Sculptors use powerful forge (trashing cards) abilities to destroy their opponents and Strong Harms deal consistent physical damage to their opponents to wear them down. While each emergent ability can lead you down a certain path to victory, you’re able to customise your play style to a large extent through the cards you acquire during the game. You’ll acquire cards to get through your draw deck quicker, to erase cards that you know longer want to trigger forge effects

If you’re already beginning to yawn, it’s time for me to let you in on the secret that makes Emergents: Genesis different from other deck builders I’ve played before. It’s not the superhero theme that we’ve seen in Sentinels of the Multiverse, DC Deckbuilder or Marvel Legendary and it’s also not the 4 players head to head variant that really does work well in this genre. No, Emergents is all about the Counter mechanic. 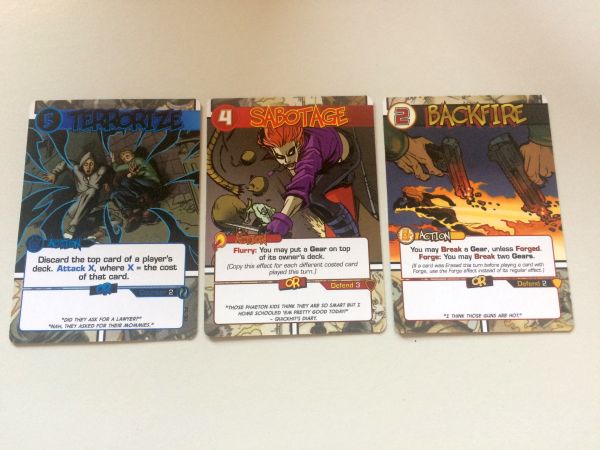 While most head to head deckbuilders have you counting up your damage dealt after playing all your cards and telling your opponent what ridiculous earth shattering number they need to remove from their life bar, Emergents Genesis treats each card attack separately and to great effect. You see, with many of the cards you acquire later on, you’ll have an action that you can use on your own turn as well as a tactics text that can be spent on other players turns, often when they are attacking you or another Emergent around the arena. These tactics card can have the defend keyword, where they would block the attack by a certain value or even a counter keyword, which means that not only is that amount of damage defended, but also repelled to the attacker. Players that have countered may counter the counter themselves and this can continue until one player cannot, or chooses not to play a card in retort and then damage is distributed. Emergents can defend and counter other players being attacked, so it’s not limited to the attacker and initial defender, but remember each time you choose to engage in a battle, you whittle down cards and limit your options for when it’s your turn, as new cards are only drawn at the end of your turn.

Not only does this counter card inject new life into a combative deck builder, but it also adds a layer of baiting and deception to the game with each attack card being played individually, without your opponents knowing the full power you wield for this turn. Do you simply attack with a weak single damage punch, and hope to lure your opponent into playing their 3 defend which leaves them open for the additional damage? Each damage card can also be targeted at a different Emergent, so you need to be wary of jumping into combat where you may not be wanted and then mercilessly battered with the remainder of the wrath of the active player. However it is tempting to jump in with that counter ability to whittle down the active players life and make them think twice about attacking with impunity! 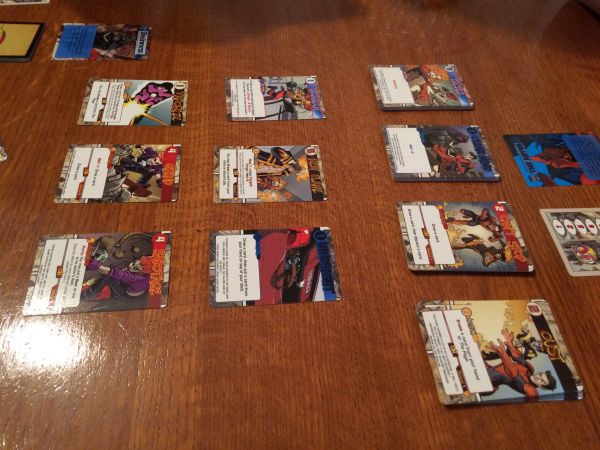 Erasing cards is a triggered ability that allows players to remove cards from the game from their hand or discard pile or even from the shared card pools. While this can also clear out starter cards and deny your opponents powerful cards for purchase, it also enables you to use forged abilities for the remainder of the turn, which are improved versions of the basic action. This can be gaining additional focus, being able to deal additional damage or even spread damage amongst multiple Emergents in the arena!

These unique elements elevate Emergents beyond your default deckbuilding battle title. This is coupled with an artwork style that I distinctly enjoyed, reminding me very much of my early comic book reading days. High speed characters like Billy Stopless and The Notch each have their own unique abilities which add a nice amount of replay value to the title, although sometimes it can feel that certain abilities are more useful than others, but often this lies in the hands of the Emergent player. The game plays well at all player counts, with 2 players offering the traditional head to head battle feel of games like Magic and other traditional CCG’s while the 3 and 4 player options add a little spice to the genre. 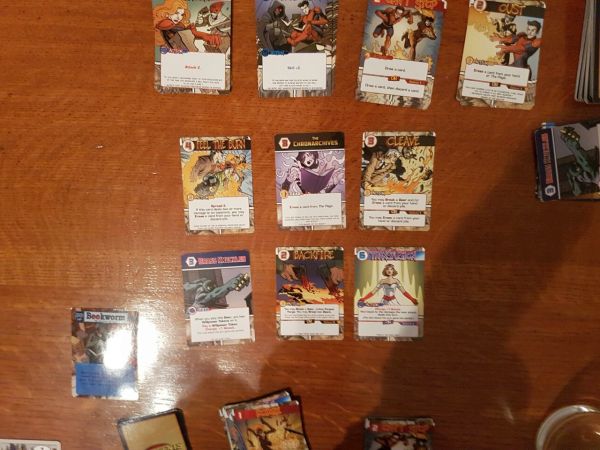 An element to be wary of for some players, is that the counter, defense and resolving each combat card individually, can slow down new players and those used to the quick pace of Star Realms and other deck builders that deal damage as a total may take a little getting used to this title. There can also be a little more analysis paralysis from players while they attempt to min max with these extra variables, but if everyone is just working on instinct, like any super hero fight should be, the game can move at a tidy click.

Lastly, while I appreciate the attempt to add a personal flair to your game through the rules; changing the names of draw piles, player discard piles, the trash pile and others to fit your theme, can really bog down any game that is slightly text heavy initially. Players for the first bit will always triple check what the Panel, Book and other areas are, and while the thematic elements of this game are there, those tend to annoy players rather than enhance the experience. We also found some flow issues in the understanding of rules where a couple of “obvious” rules and setup elements weren’t thoroughly explained and required some insight. 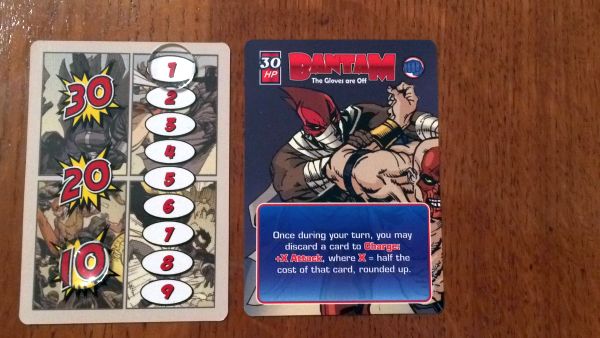 Would we recommend Emergents Genesis? Yes, to those who are looking for something unique in their deck building mechanisms and are prepared to have their hands played in a more thoughtful manner. The art is visually appealing and the team behind Urban Island Games and Top8Magic successfully kickstarted the project and have produced a slick well presented package. As a person who felt that he had lost his fondness for deck builders, Emergents: Genesis offered me something unique to the table, and we had a blast with the take that style of fighting and all games were close with each fighter making sure that no one was left unscathed in our battles. If a game store near you has got a copy, definitely check it out and if you’d like to order a copy online from Urban Island Games you can order directly from their site.

Disclaimer: Copy of Emergents: Genesis was provided to CBQ by Urban Island Games.

Under the often used super hero deckbuilding theme, Emergents: Genesis offers something a little different to the norm that we appreciate. With a generous 13 heroes out the box, great nostalgic comic book art and a different play style of countering attacks and interfering in others carefully laid plans, this deck builder does enough to step forward and be a hero in front of the masses of others vying for your attention.