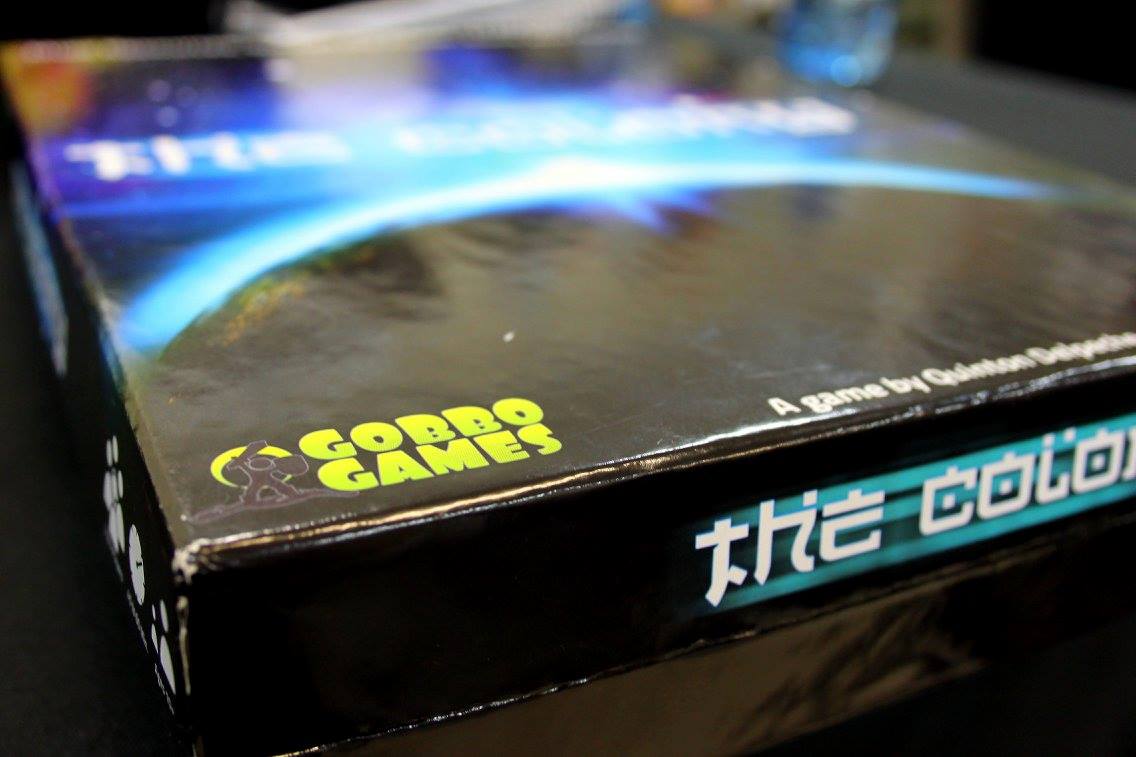 What is it? The Colony isn't interested in racing for the Galaxy, just for control of the planet Fury 1228. Build mining structures, defensive and offensive installations and make sure that Novinium feeds your coffers and not your enemies. Muscle them out and soon enough you'll have the only viable Colony. The Federation will be pleased!

Writing about locally produced games is always a double-edged sword. Though my patriotism these days tends to bounce between fervent and apathetic like a game of Pong, there’s always a sense of pride that accompanies delving into a Proudly SA product. But along with that comes both the fear that the product’s story as it were is lacking, and the creeping sense of guilt that accompanies the telling of it. We want to see the local boardgame design scene flourish, and having to convey honest criticism isn’t always a pleasant process. But we also want a thriving scene that produces excellence despite the constraints of designing in a third world economy.

Which brings us to The Colony 2174 from Gobbo Games and designer Quinton Delpeche. And my growing sense of relief in being able to inform you that a lot of testing and hardwork has resulted in a solid game with a trick or two up its sleeve. The pressing question is therefore not so much is this a good game, but rather does The Colony do enough to stand out from the crowd?

Basic premise – humanity are in expansion mode, seeking a foothold in the expanding intergalactic economy. A rich vein of the rare and highly valuable Novinium has been discovered on a fairly inhospitable planet, so the race is on to develop the first sustainable colony on the planet Fury 1228. As for the mechanics, The Colony is a card-drafter in the vein of Machi Koro in which you’re purchasing cards to add to your tableau and activating their abilities by rolling dice. Every self-respecting colony needs a Reactor, Biodome, Portal and Orbital Station – suffice to say the winner is the player who builds those Colony structures first. 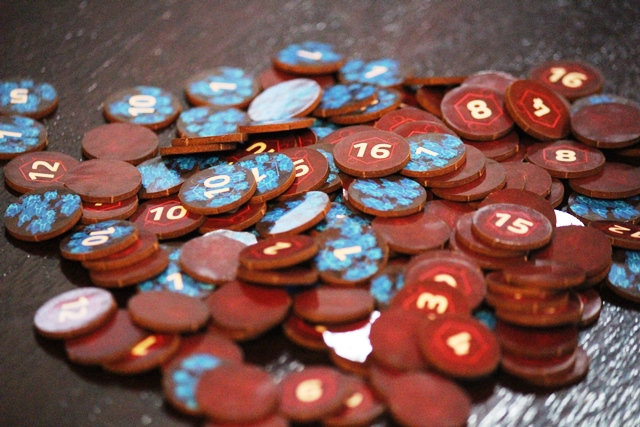 Before I comment on the components, it’s important to keep in mind that The Colony is a game brought to life through the Game Crafter system, making it for all intents and purposes self-funded and self-produced on a limited budget. There’s a generous number of structures to build, more so than Machi Koro’s base game, as well as a number of Influence cards, Event cards and tokens. Gobbo Games went with an unusual colour palette that’s somewhat muted on the table and has a more workmanlike approach to the art work. The buildings are reminiscent of Star Craft which adds a pleasant touch of nostalgia to proceedings, but The Colony’s interest is chiefly in engaging your intellect and not your eyes.

Gameplay will feel familiar to most, players all start with 4 basic structures which they will activate to chiefly collect the game’s currency, Novinium. This can be used to purchase structures from the pool (a 3×3 grid open to all players) to add to your tableau – you’re essentially building a Novinium engine to build up enough to unlock your Colony structures and win you the game. How are structures activated? You roll a die (later you can choose to roll 2) and if you have a structure with the matching result, you can perform that structure’s action, as can anyone else at the table who similarly matches. Multiple matching structures? All of them activate. And it’s really about as simple as that. 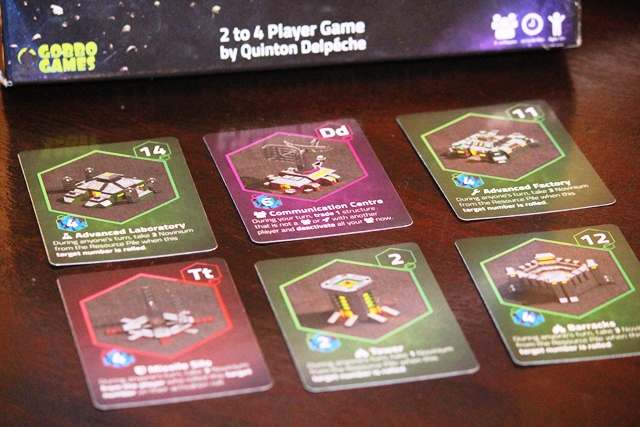 Well, except for The Colony’s secret weapon – the Influence Deck. Influence cards change the result of a die. Roll a 3 but you have no structures that will activate? No sweat, you have a +2 Influence card that changes the result to a 5, and since you have 3 matching structures you’re sitting in the pound seats. Or are you? Because your opponents can play Influence cards on your turn as well. Yeah, you can see where this is going. What seemed like a relaxing Sunday afternoon stroll in space suddenly turns on you quicker than a Romulan ship, because now that 5 is actually a 7 and your opponent just reeled in a ton of Novinium and left you feeling as hopeless as Spock’s capacity for laughter.

Fortunately, things are held back just enough for all out bloodshed to ensue. You can only ever have a maximum of 3 Influence cards in your hand at one time, and since Influence cards are played on a turn until all players pass and you can only draw on your turn again, there’s a really intricate balance to be found. It’s never ideal to be sitting without any, but at the same time when a great opportunity presents itself letting it slip by might prove costly. Influence cards don’t just mess with dice rolls though – certain cards may Block all cards played that round and allow the original result to stand, as well as Reroll that does exactly as advertised.

The Influence cards are great fun, I can’t deny. For groups that enjoy a take-that element as well as an additional level of tactical play, they truly are the heart and soul of The Colony. And the balancing feels pretty good in terms of the give and take. It does lengthen the game though, depending on how many cards are played and some may find that this disrupts the flow. Part of the appeal of this style of game is that turns move pretty quickly, there’s a rhythm that’s rather seductive. Multiple plays will likely make this less of an issue, and it’s not like Machi Koro doesn’t have it’s fair share of players who take too long to buy new buildings on their turn. 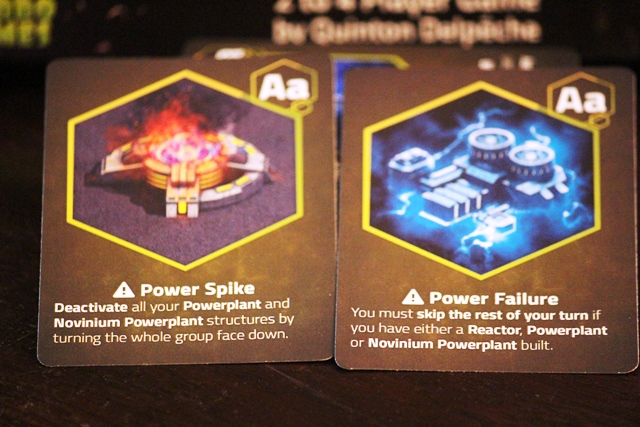 The second twist on an existing formula, is Target Tokens. Certain cards in the Structures deck have a Tt symbol in place of an activation target. What this means is that when you first purchase one of those cards, you roll a die and that result then becomes the building’s activation cost, which can then be altered as the game plays out. So for example, I may buy Air Defense early in the game, and roll a 2 which sets the activation target of this building to 2.

But since in the late game I’ll likely be rolling two die, ideally I’d prefer my Air Defense to have a higher target number. No problem, I can simply use as my single action for my turn the Re-target action and attempt to roll a more viable target. Many games of this type tend to have an issue where early game structures become obsolete, so this is a very clever way of negotiating that obstacle. This also means that if you identify a weak spot in your engine, for example you have no buildings that activate on a roll result of 4, you can attempt to plug that gap. We did find in our first game that only one of these cards was available to purchase, I’m not sure if their rarity is by design or if that’s simply how the shuffle played out.

Lastly, no inhospitable planet is well, inhospitable without throwing a number of unknowns at any would be intrepid settlers. If after your activation roll you can’t activate any of your structures, you draw a card from the Event deck. Some of these are precarious environmental hazards that could shut your production down, others may actually be fate smiling upon you. But whilst I understand that the unknown isn’t inherently a bad thing, I’m not quite sure why these events sway between disastrous and fortuitous? It certainly encourages a diversity in planning your colony and prevents a player from ‘spamming’ one particular building type, but in the early rounds you’ll often miss activations on an unlucky roll – when you’re forced to then draw a card which exacerbates your misfortune,  it does seem a harsh punishment.

Unfortunately, and this is where my subjective opinion comes into play, while I enjoyed playing The Colony the overall experience didn’t quite click. While I appreciate the effort that went into crafting the scifi atmosphere, the game’s theme doesn’t really translate into the gameplay the way that Valeria: Card Kingdoms for instance does, where the fantasy theme is supported by aspects of the gameplay such as battling monsters.

I also have concerns around the Influence mechanism. Though I personally enjoyed the added dollop of chaos, I can see this being a source of frustration for many players. The game already has a high dependence on luck from dice rolls – hitting a 7 that finally allows you to activate a particularly beneficial structure, only to have that roll changed to a 6 and not have the cards to counteract, can prove deflating. But as long as you’re aware of this going in, it’s important to note that all players are subject to this – the fickleness of Lady Luck shows no favour to anyone. 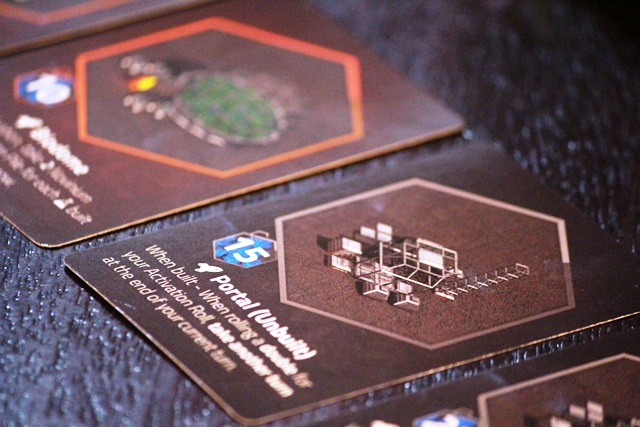 The good news is that due to The Colony’s publishing structure, it’s also a game that is being refined on a consistent basis. As I write this, the game isn’t available for sale as Quinton is tweaking rule subsets. The best way for the game to improve is with your support, so if this sounds like a title you and your group would love, hit up Gobbo Games on their Facebook page or checkout their Game Crafter page to see when The Colony is back up for sale. I’d also just like to mention the excellent job Quinton’s done on the rulebook, which is extremely comprehensive and even has a written playthrough of the first few rounds of the game.

I couldn’t handle being a designer. Creating something you love and then pushing it out of the nest and hoping instinct kicks in and wings work, is a scary proposition. Even more so when you don’t have a giant publisher behind you. The Colony 2174 is clearly a labour of love and evidence of a designer who shows promise. There are some clever aspects on display but I’m just not convinced they mesh together in quite the right way. Regardless of personal preferences, I nevertheless still enjoyed my time with it at the table and I hope to see what Quinton and Gobbo Games have in store for the future.

Edit: Please note, The Colony is available on Tabletop Simulator or as a Print & Play version.

Whilst I wasn't convinced this particular Colony is a place I'd like to settle, I'll be keeping a close eye on the Federation's future expansion plans. When they do find the perfect utopia, I don't want to miss out.