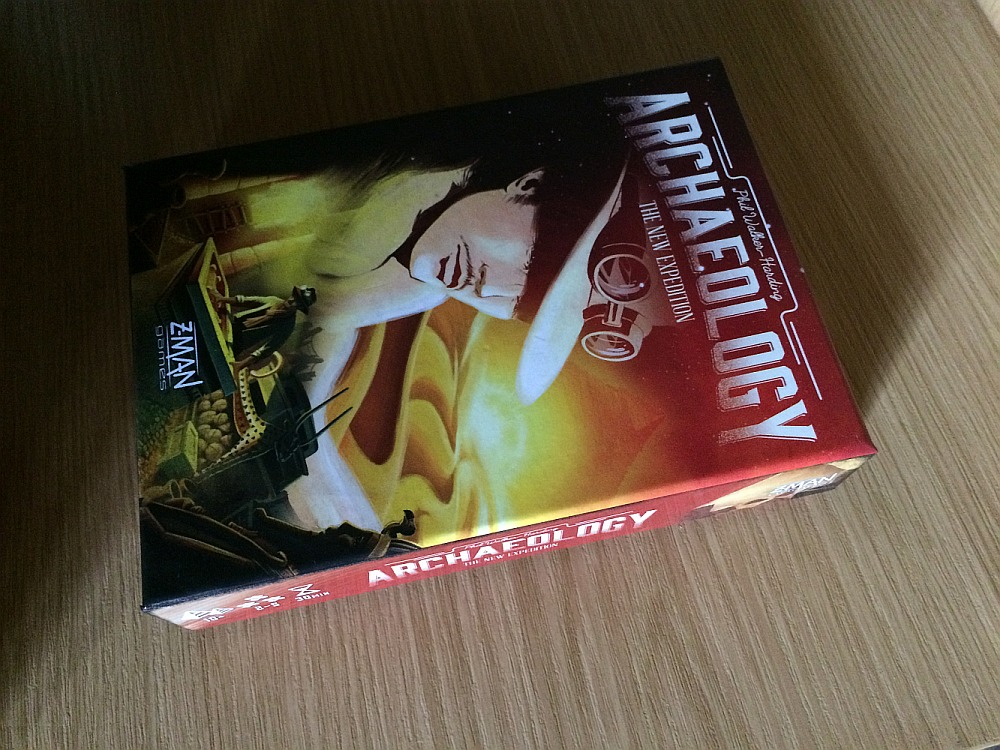 What is it? You've found it! You race into your lab with excitement as you unfurl the ceramic shard from your napkin and set it down gently on the desk. Weeks have passed and pressure from the museum was mounting, your funding for work at the dig site a donkey's ride from Cairo set to be cut. But you'll show them! As you run the bristles of epoxy over the edges, you slide the last fragment into place and pick up your magnifying glass to admire the finished vase from before leaders of great faiths walked the earth. An inscription catches your eye as you hold the base up to the light, eager to test your hieroglyph studies. You feel a lump in your throat rise as you read the first three letters.. I-K-E-..... sigh.

One man’s trash is another man’s treasure they say, but everything has some value when you sift through the sands surrounding the purported death beds of the Egyptian Pharaohs. Phil Walker Harding originally created Archaeology: The Card Game in 2007, winning an award for the design in 2008 and after being buried for near a decade, Z-man dusted off the residue of a previous era and has polished Archaeology in the attempt to catch the eye in a new golden age of board gaming.

In Archaeology: The New Expedition, players will assume the role of archaeologists all attempting to uncover treasures from the dig sites, haggle over artifacts at the market all in an effort to sell (mostly) completed relics to the museums to amass glory. The relics come in the form of illustrious golden Pharaoh masks, ancient talismans and ceremonial cups through to parchment scraps and even shards of giant pots found adorning the palaces of royalty. As many collectors will tell you, although individual pieces are valuable, you should always sell valuable in goods in sets to yield the highest price, so you’ll need to amass many pieces of each relic type to garner interest  from the curators. However Egypt is not without her perils, and you may find many a looter snatching at your prized goods on the way to the museum or market and dig sites are often devastated by sandstorms that will bury and disperse your relics for others to find later and profit from! 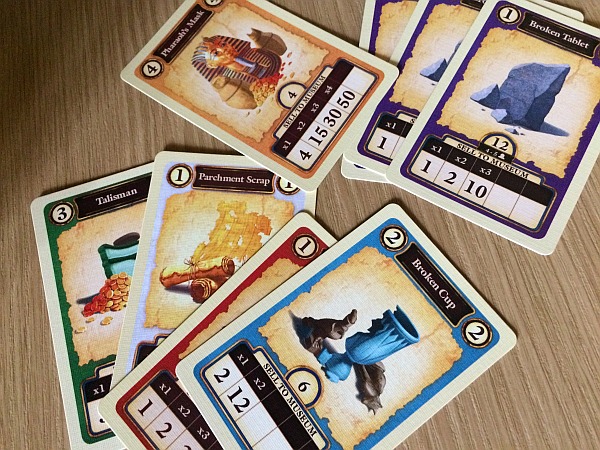 Archaeology is a set collection game with a focus on hand management and just enough push your luck to keep players guessing. Players begin each game with a set of 4 cards of various artifact pieces and will attempt to get sets of the same types through visiting the dig site and exchanging goods at the communal market. Each card has 2 values, a market trade value and a museum value. The market value is constant to share exchange value, however the museum value increases, depending on how many pieces of the total artifact collection you have. For example, single pieces of parchment at only worth 1 gold each, with 2 and 3 pieces being equally valued however should you have a completed parchment of 4 pieces you’ll net 10 Gold for that set! 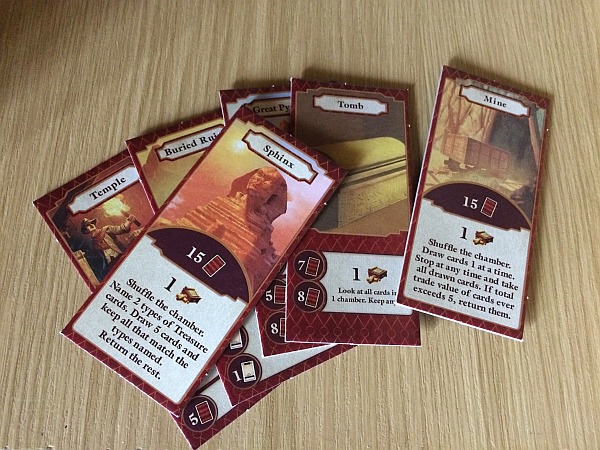 At the beginning of the turn, players will draw a card and add it to their hand. You’ll then have the opportunity to trade goods in at the market and exchange them for available relics in equivalent cost to what they traded in. Need 3 pot shards from the market to create a completed pot? No problem when you trade in a talisman worth 3 gold in exchange for the 3 x 1 gold cost pot shards. You can also sell your pieces to the museum for the value of the set that you have in hand and when you’ve performed as many of the market and museum action as you wish, you’ll pass over to the next player. You’ll need to be shrewd in your timing of trading at the market and selling to curators at the museum to maximise your earnings, but be aware that there are those that would pilfer from your accumulated wealth as well as the elements that aim to keep history’s treasures buried. 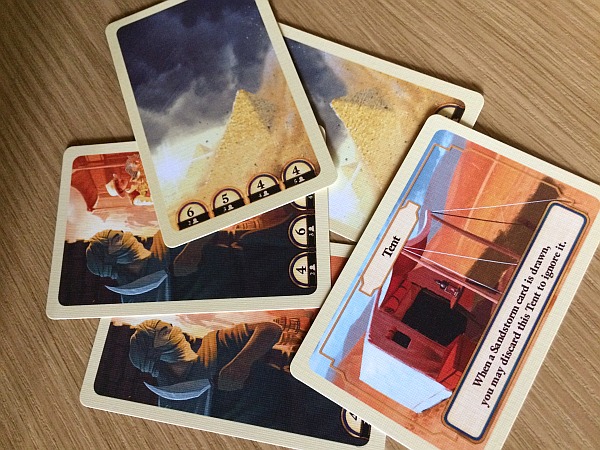 Expeditions to the dig site at the beginning of the turn do not always yield new treasures, but may also grant you a chance encounter with a thief. These charming miscreants will happily offer their services to raid another player’s hand of treasures and opportunistically (at random) retrieve a good for you to add to your collection. While these chance meetings are beneficial only for the player currently visiting the dig site, the sand storm cards make archaeology a blistering experience for all. When a players draws a sandstorm card, all archaeologists will end up losing half of the treasures in their hands as they scramble frantically for shelter, with these goods being added to the central market to be purchased in future actions. Once per game, players may use their starting tent card to seek shelter from a storm and secure all their treasure from the advances of mother nature. The player who drew the sandstorm card will get to visit the dig site again immediately and the conclude the remaining actions of their choice. 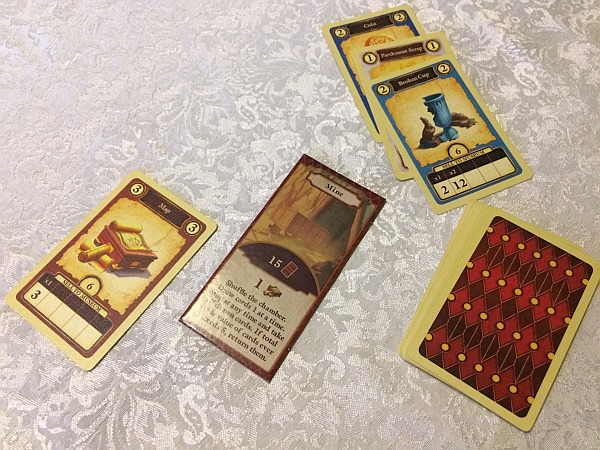 While most archaeologists are content with simply finding treasure, many long for the thrill of expedition. Not only can relics be found at the dig site, but also map pieces, which allow archaeologists to explore special chambers to amass even more wealth than they would usually find! Each game of Archaeology: The New Expedition will have a special monument location for players to explore by spending map cards on their turns. The game includes 6 different monuments, all with a specialized rule for variability, which can include a mine where players will flip over treasure cards one by one before a cave in, or simply the great pyramid with 3 chambers (each requiring different numbers of map scraps to get in) with varying numbers of cards to the luck explorer to gain! So choosing when to explore is crucial in making sure you get the best artifacts to take to the museum.

Play will continue until the dig site draw pile is emptied and then players will count up the points of all their individual museum sales and the archaeologist with the most gold, wins. 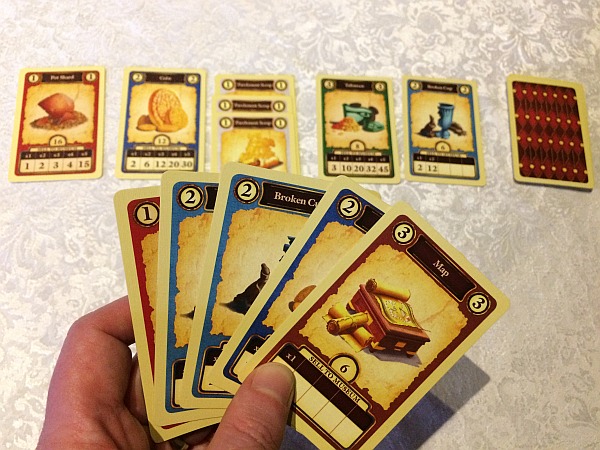 Archaeology: The New Expedition is a great little filler with just enough strategic choices and push your luck tension to make it one of the best games of its type on the market for its price point. You’ll be watching like a hawk when someone buys one of the 4 masks at the market with 2 cards already in hand but chooses not to sell immediately, you’ll be groaning when the thief gets played on you and that special relic you thought was hidden ends up in your opponents hand only to be sold immediately as part of his set to the museum and you’ll be cursing when the sandstorm, just after you’ve used your tent, hits and scatters your 4 pot shards across the desert. The quality of the components is great, with the new art really elevating the look of this game to the modern era and helping to immerse you in the Indiana Jones feel of raiding tombs. We’ve agonized over whether to go for pot shards or parchment, talismans or cups, felt the tension of the draw and the enjoyed the chuckles of watching someone pull the worst card from your hand with a thief.

As one of our shorter reviews, it’s hard not to enjoy this game and it fills its role beautifully in my collection. While its not something I’ll play a full evening of, it’s a great game to allow you to enjoy the time with your friends without the silent mental gears constantly turning, yet still feel that you’re making decisions that will impact the result of the game. With any card draw game there is chance, but choosing when to sell, when to hold onto that tent and when to buy into the market make this game a nice amalgamation of lighter mechanics in an enjoyable half hour. It scales well and I have enjoyed it with 2, 5 and 4 players, and while it wont appeal to the hardcore for an evenings event, it’s a great game for introducing people to the hobby, playing with your parents or spouse or just a filler with the group when nobody feels like thinking too hard. So go dig up some cash and pick up this great filler. 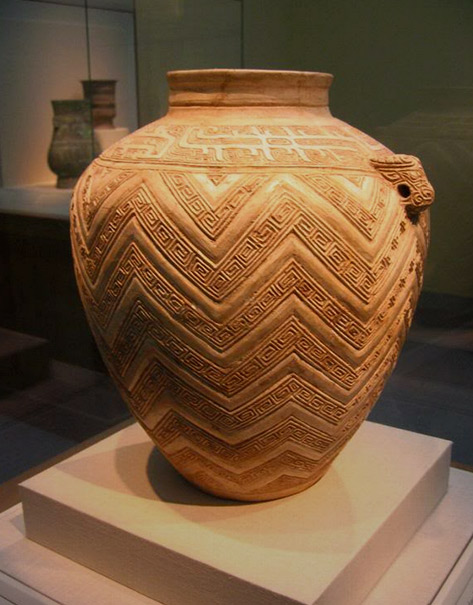 We really enjoyed Archaeology as a filler game that was great at all player counts, had enough variation with the different monuments and had some hilarious push your luck moments of sandstorms scattering treasures and thieves grabbing each others loot. Its a game that will appeal to almost everyone in each of its elements. While its not the leader in any distinct department, each of its parts when put together create a filler worthy of the highest shelf in your collection.