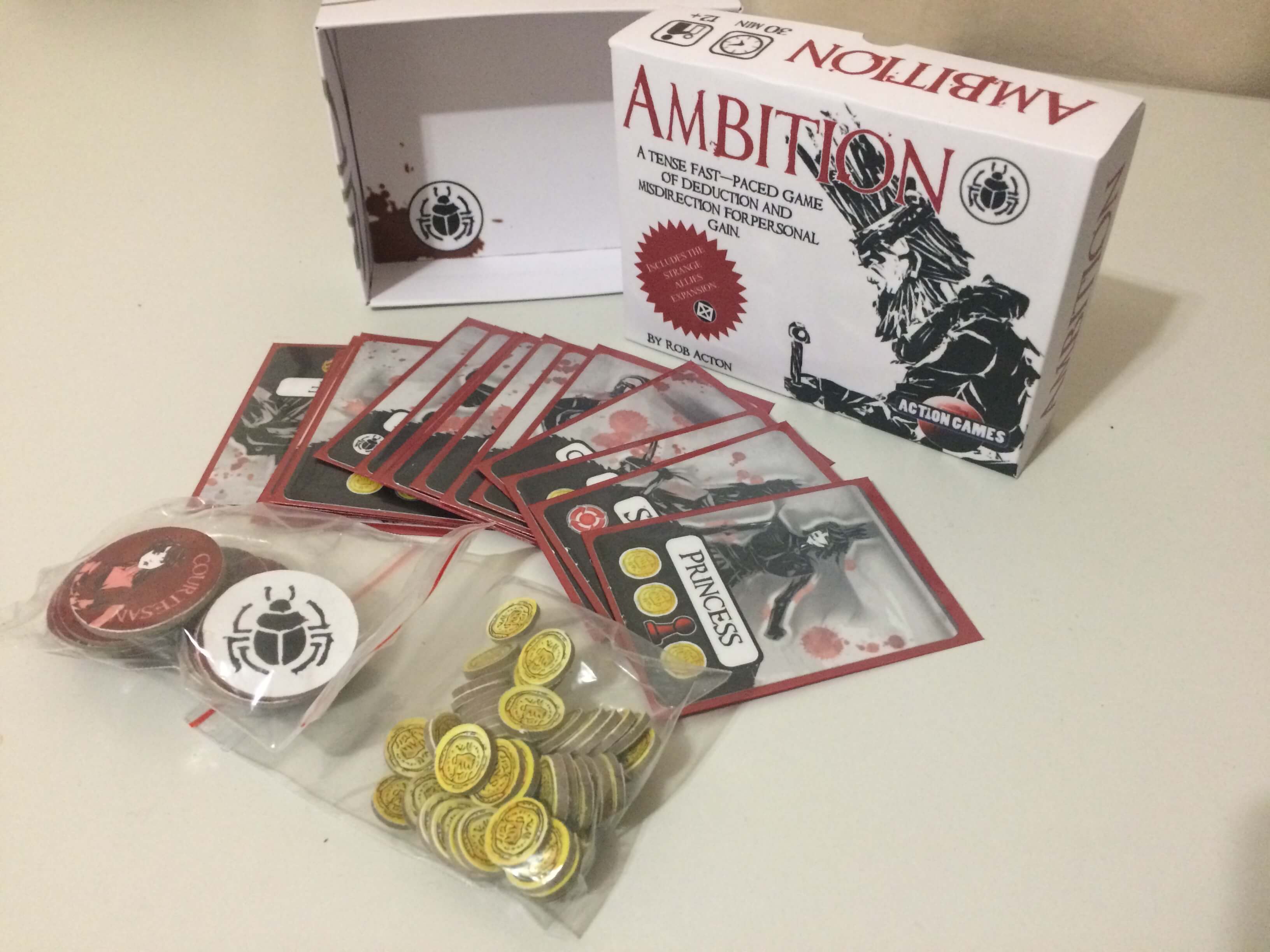 What is it? Ambition has a simple goal, deceive every person around the table and walk away with 10 coins first. Give them your best card and foil their plans, send out your most powerful denizen when they least expect it and aim for the soft play when the heat is on. Does this game succeed in a market filled with Coup's, Resistances to coup's, Falling spies and Operations?

As a local South African Gaming blog, we try to be a part of the community by giving our audience updates on games we think they should spend their tax returns on before disclosing the amount to the household treasury, as well sd attending local events and giving the odd demo to anyone Jason doesn’t frighten at the table. In sharing upcoming local events through the news and introducing you to the next hotness, we’ve been fairly successful, but this week I’m really excited to share locally developed games, from some local designers who are showing a lot of Ambition by devising plans to accumulate coins on the global arena by garnering funds through Kickstarters. One such devious gentleman, whom it was my pleasure to receive instruction in the form of artful manipulation, is Rob Acton and Ambition kicks off a focus on local games over the next few weeks.

Ambition is a hidden role and bluffing card game where players attempt to use the various roles of the kingdom’s denizens to gain 10 coins to showcase your influence and become the next ruler of the Chitin Throne. You’ll need to shift roles between various characters to surprise your competitors to the throne who will aim to thwart the use of character powers. Misdirection is key in ensuring safe navigation of the treacheries of the court to rise to power. Certain abilities are more powerful than others gaining coins quicker, while other characters slowly set up longer plays for glory Any player openly amassing power too quickly will gain the attention of all looking to stop their actions. 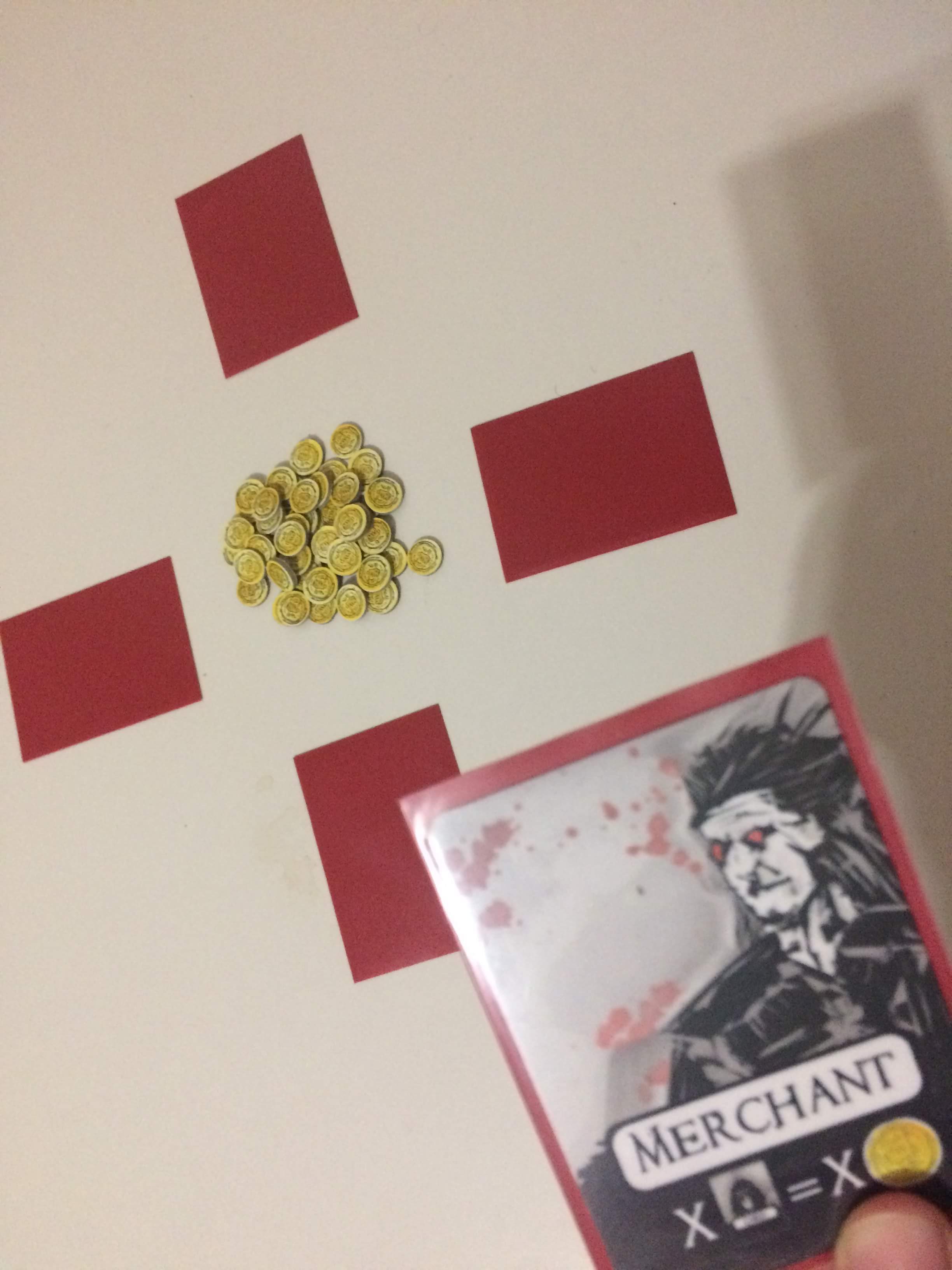 At the start of the game each player is dealt two unique character roles face down from the initial deck of 12 character cards. One character is returned to the box to eliminate card counting from experienced schemers and the round will start with the pass phase. Each player, starting with the 1st player holding the scarab of power, will pass one of their cards to the player on the left who then will choose from his cards (including the recently acquired card) which to pass on until each player has passed a single card. We then move to the play phase, where each player chooses one of the characters to play face down on the table in front of them.

After each player has chosen which card they wish to activate, starting from the player to the right of the first player and moving in counter clockwise order, each player gets to name a character that they wish to block. This prevents that character from being activated in the current round. Once each player has named a character to block, starting with the first player and going clockwise around the table characters then activate. If their chosen card on the table has not been blocked, the character action they planned for the round is revealed and the action performed. If your choice of character has been blocked or you simply don’t want to activate this round, you tap your card with your knuckle indicating that you will not take an action. After each player has performed the action (or not), the scarab of power is passed to the left and players recollect the card played that round.

It’s the abilities of the Characters that make Ambition an intriguing affair, from the Bodyguard who grants a coin and an additional ability to block another character in the round through to the Assassin who kills off another character for the rest of the game and claims a coin for their work. While the King grants the activating player 3 coins, you can be sure that he will be blocked by many players throughout the game, causing you to waste a valuable action. The Spy is a softer approach to play, granting you a coin and a guaranteed activation of your choice in the next round due to the Sneak token you gain, while the Madman just wants to watch the world burn by ending the round immediately and collecting all the cards to redistribute them among players after being randomly shuffled. Need more options in your turn, simply pay 2 coins at the start of a round to purchase an additional card for the remainder of the game at the cost of setting you back from your goal of 10 coins. 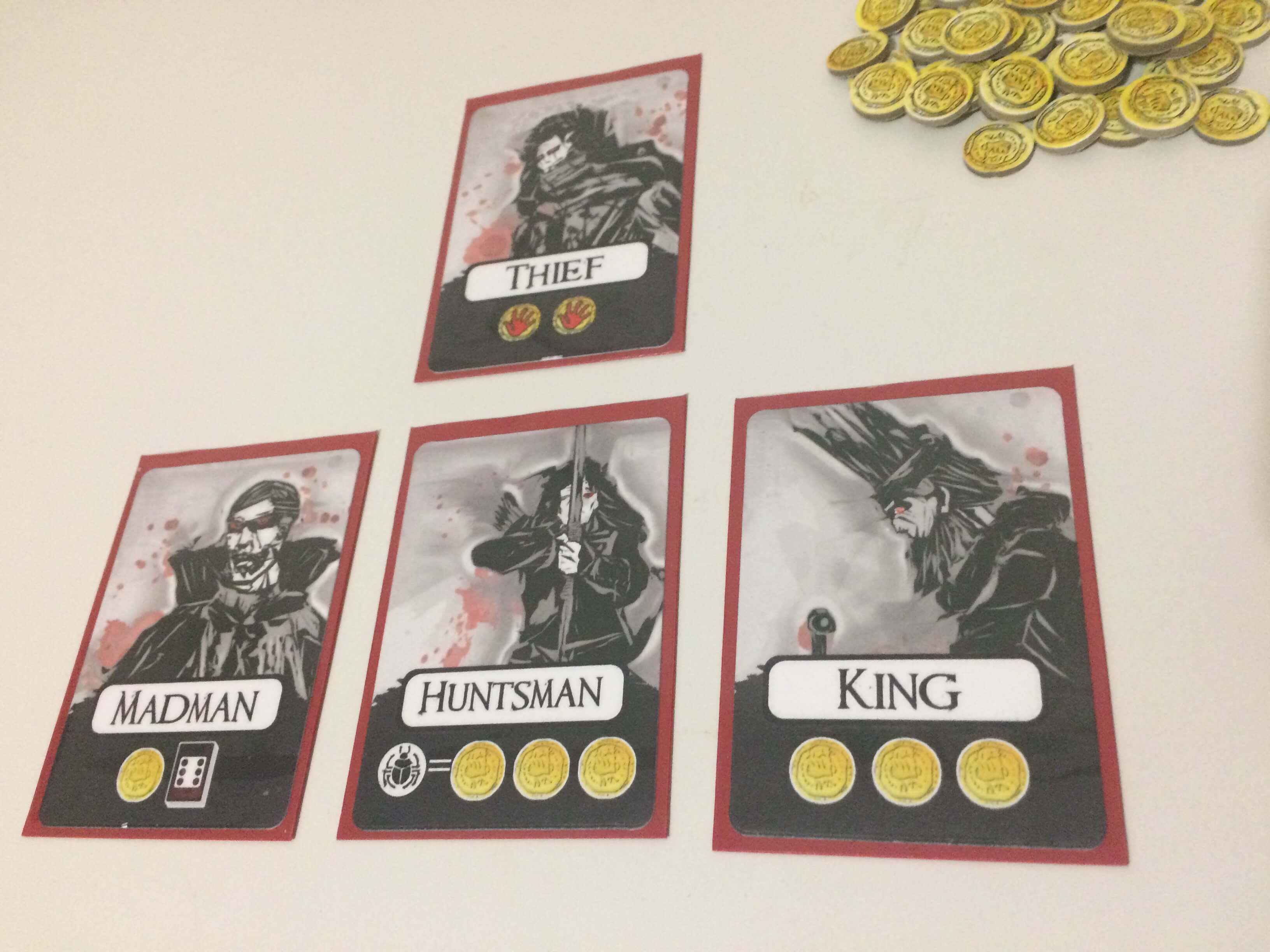 Ambition shines in the information it grants the players with each round and how much you share. You’ll need to focus on what gets played each round, and decide when to play your cards and what character you’ve seen do the rounds. Turn order is of crucial importance as well from round to round, as playing the Bodyguard as the last player in the round makes his influence simply the gain of a coin as you wont respectively block an already activated character. You’ll want to hold onto the King for that 3 coin boost, but what good is this option if everyone knows he’s in play and in your hand? Conversely it’s a guaranteed block each round that means you can sneak your other character in more easily?

Do you block the Madman you just passed, knowing that someone who grabbed hold of it is just dying to level the playing fields again? The block mechanic is unique from the “calling bullshit” mechanic of Coup and Operation Faust, one of which carried a harsh penalty for lying, and replaces it with the frustration of being outplayed which is a big plus for all the groups I played with. We also loved the powers, such as the Merchant who gains money for each player who activated his character that round or the Witch who makes a player switch his card in hand with the card they planned to activate causing groans of dismay, or often opening the way for an activation. The variety of unique powers were a ton of fun and made the cards you held in your hand important. 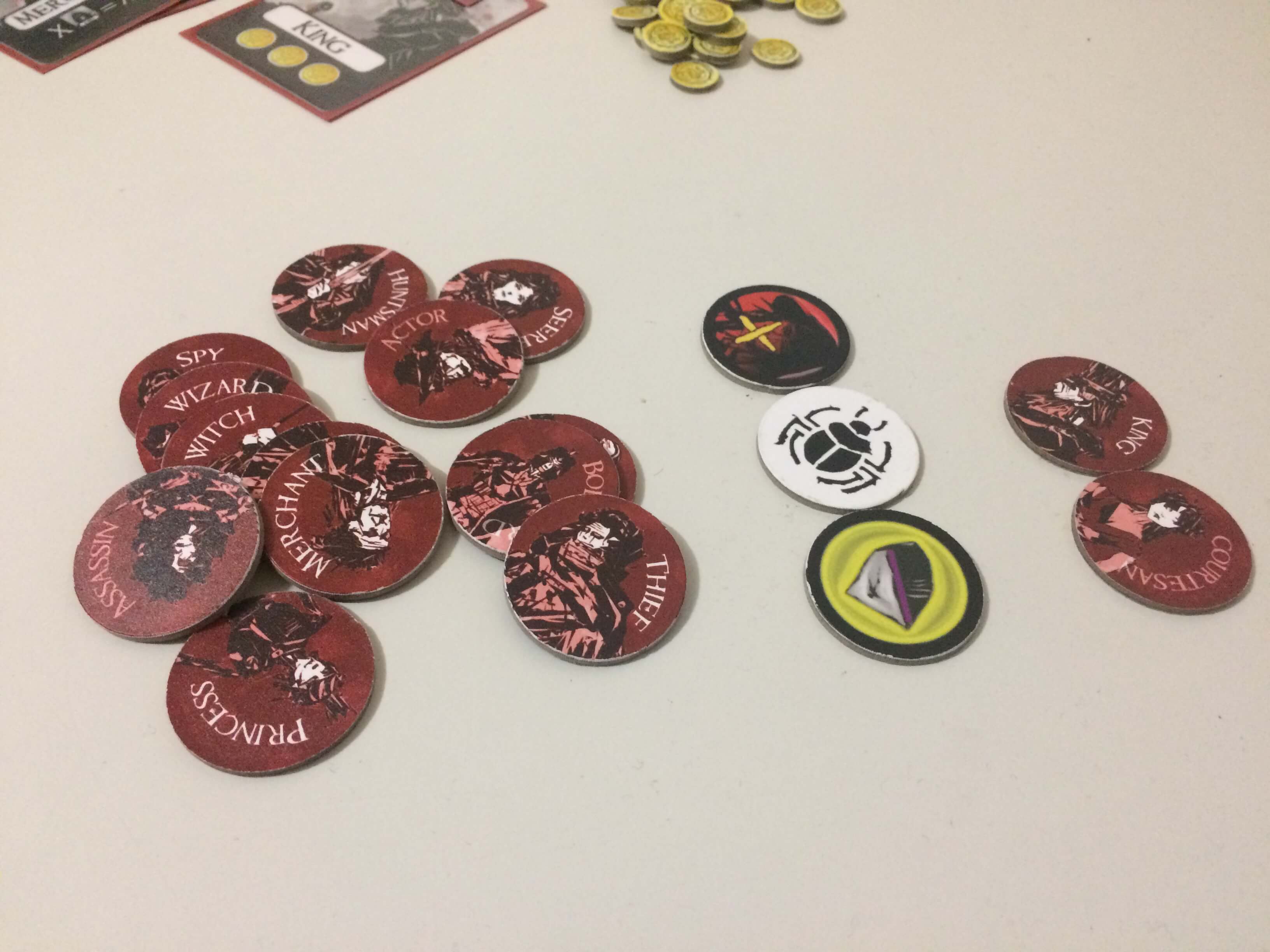 During our sessions of Ambition we foiled each others plans and drew more characters with such reckless abandon, that the slow edging toward that winning 10 coin threshold pushed our session often beyond the 30 minute play time stated on the box. With the inclusion of a 5th player, the Strange Allies expansion, should players continue to add more cards to their hand through recruitment blocking may became less decisive. With so many characters in play and the game tension built around thieving, subtle plays and a pendulum swing back and forth, the game felt slightly longer than I wanted it to on occasion. Whether further plays with the same group will open up additional strategies to counter this will be seen, but for new players there is that potential to simply block the main powerful culprits allowing a slower more deliberate win. The art is also not to everyone’s taste and may be a touch dark for some, however in an ominous world built on deceit the contrast of black and red serves its purpose well. Production quality is often a critique with small run productions, and while not blown away we found the stock sturdy and functional while not exemplary.

If you enjoy social deduction and bluffing games, this is a well designed game built on the lies of others to create something subtly different, yet familiar that may well become your chosen title to play in this genre.

You can grab Ambition from local game stores in Cape Town or reach out to Rob himself through the Facebook Page. There have also been murmurings of a crowdfunding campaign to get this game out to a worldwide audience and we’ll keep you posted on any further developments.

Cardboard Quest was provided with a copy of Ambition for review purposes.

In closing, Rob Acton has designed as a one man army (or despot to the Chitin Throne), an intricately layered game of bluffing and double bluffing that rivals many international hits of the previous few years. Each character power feeds off the intentions of other players, has a moment to define its use and once announced to the table has people second guessing. We really enjoyed each of our plays with Ambition and although not without minor quibbles associated with small run production, we can recommend it to those who enjoy lying to friends and reveling in the satisfaction of beating every player at the table. And in everything we've found from a local designer in this game, it shows that sometimes being Ambitious pays off.