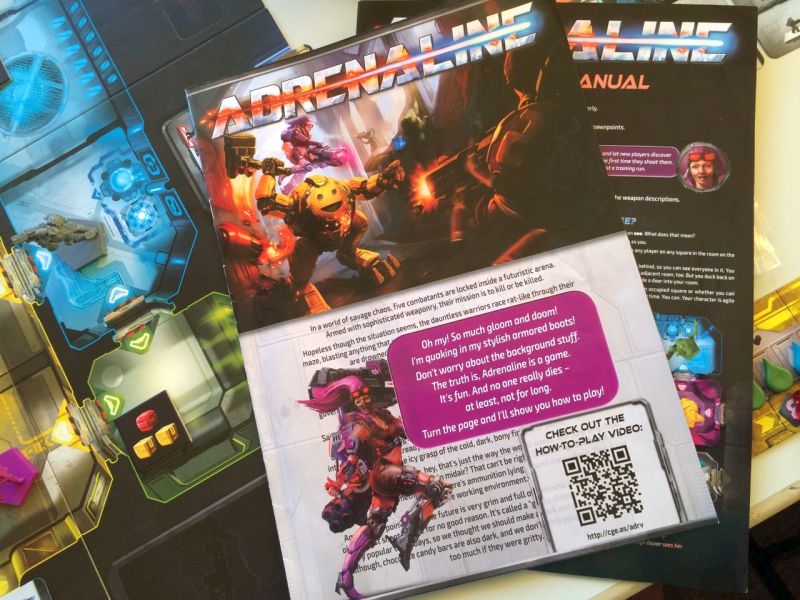 What is it? Oh I remember the flak cannon. Hours spent huddled over a mouse and keyboard, zigging and zagging through corridors and unloading lead and lasers into opponents. Double, Multi Kill, GODLIKE! While shooters have evolved, it's time about time that the first arena shooter arrived in cardboard glory. While you cock your shotgun and open fire, you'll discover immediately that Adrenaline has a little more than just running and gunning.

I grew up in a generation of video game shooters. I’m not talking about the likes of Call of Duty & Destiny but shooters that had titles with 3D in them. In high school, Cliffy B (famed creator of Gears of War) was working for Epic and created Unreal Tournament, my first encounter with a multiplayer first person shooter, where human players would run and gun in an arena, with the individual and team matches where the victors would have scored the most kills in an allotted time period or to a certain limit of deaths. We’d grab guns, hover around spawn points and dash for the necessary ammo to blast our enemies and spent countless hours taunting each other and making each other ride rockets. Now if you can suspend your disbelief for a the rest of this article, imagine what this would be like as a tabletop game. 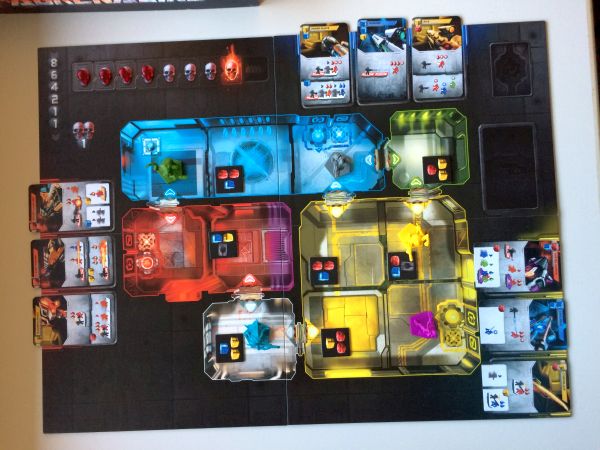 Adrenaline, designed by Filip Neduk and published by Czech Games Edition, is a first person shooter / Euro game hybrid focusing on resource management and area control where 3-5 players will be moving their miniature around an arena collecting weapons and inflicting massive amounts of damage on each other with these tools of destruction. Players will each have 2 actions that they can perform on their turn which involve combinations of movement, picking up ammo or unique weapons from different spawn points in the arena and then firing those weapons upon other players and inflicting damage. Each player has a life bar, and as they receive damage from other players, they will receive blood drop tokens that fill in the life bar and once a players life bar is filled with these tokens they die and respawn. 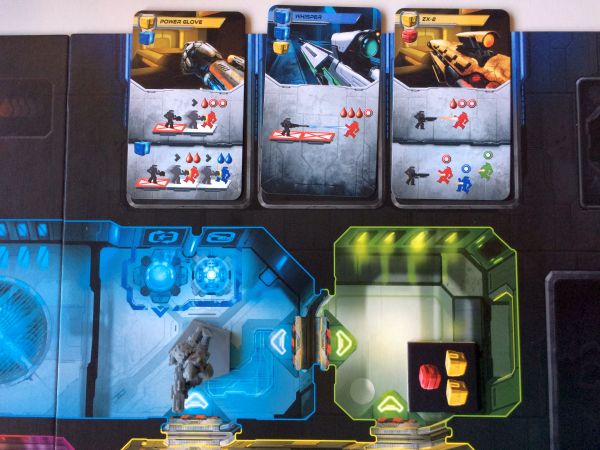 When a player dies, other players will score, with the player who inflicted damage first receiving a bonus point, the player who got the killing shot placing their marker on the number of kills track and then points are scored in order of who inflicted the most damage on the recently deceased player. For example, the player who inflicted the most damage will receive 8 points, the next player 6 points and so on. One of the 8 skulls, representing the kill (frag) limit that will end the game, is then placed over the highest number of points on the dead player board and that player then respawns, only to be worth less points (descending from 6) when that player dies for the second time. Once 8 lives have been lost, the final round is triggered and then at the end of the game points are tallied with the players receiving additional points for number of killing shots similarly to when players are killed, with the most killing shots getting 8 points, second 6 all to the player with the least kills. Player with the most points wins. 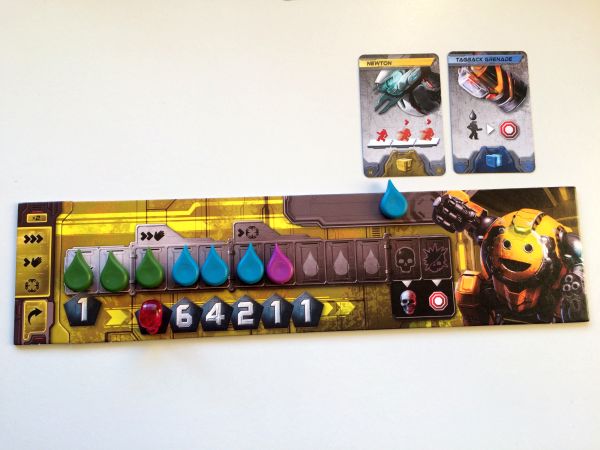 Any FPS fan will tell you that these games are all about the guns, and Adrenaline has crazily powerful weapons in spades, from the melee cyberblade and power gloves through to the rail gun, tractor beam and heat-seeking rockets. Each weapons feels uniquely different and has multiple firing modes, depending on the amount of ammo resources you’re prepared to spend. Let’s touch now on the ammo mechanics of the game to really explain to you why Euro gamers will feel right at home in this shooting frenzy. Each time a player picks up a weapon, it’s loaded with the ability to be fired at will. Once a player has fired a weapon, he’ll place the card on the table in front of him, indicating that the weapon has been spent and only at the end of the turn, will a player be able to trade in the required collected ammo cubes to reload the weapon and take the card back into your hand. Without ammo, you’ll be simply carrying around a lump of metal and rushing to get to the ammo spawn points containing the ammo you need. Each weapon type has a primary type of ammo and you’ll be constantly collecting various combinations of red, yellow and blue cubes to make sure you can always fire at least one weapon each turn to get enough wounds on your opponents to score points when they die. Alternate firing modes of the guns will cost you additional ammo, but often yield a more powerful attack or an ability to damage multiple enemies in the same spaces. 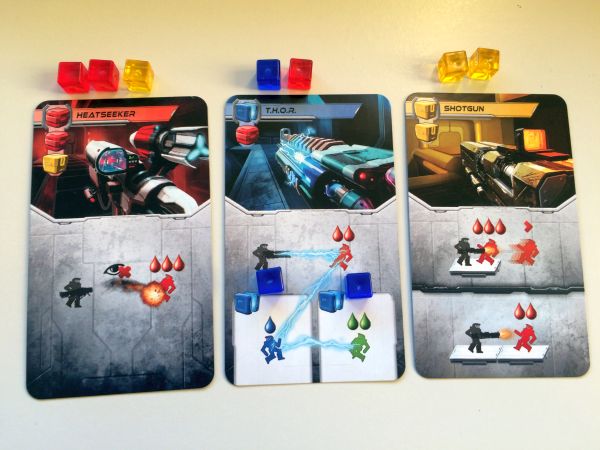 We’re talking about the ability to shoot through multiple walls, to smash someone across the room with a sledgehammer, or to set fire to an entire room in the arena! Players can inflict two types of damage, direct and tagged. Direct damage is placed onto the players life bar, while tagged damage is placed to above the life bar, however once that same player lands any direct damage subsequently, all tagged damage is added to the players life bar in addition to that direct damage, making for some ultra combos of damage dealing.

All these combinations of weapons, tagging and damage management make Adrenaline a game whose theme is deceptive to its strategic elements. Once players have been killed, they become less valuable targets in comparison to others on the map, eliminating the desire to pick on your nemesis and similarly you’ll want to try ensure you get the first shot and the killing shots on players as many times as possible to get bonus points and majority on the kill track. Tagging damage becomes a delaying option to try to snipe killing shots, careful placement of your figure so that you have line of site advantage at doorways give you the advantage and doing the maths on damage majority and ammo management will keep you thinking twice about your next move. 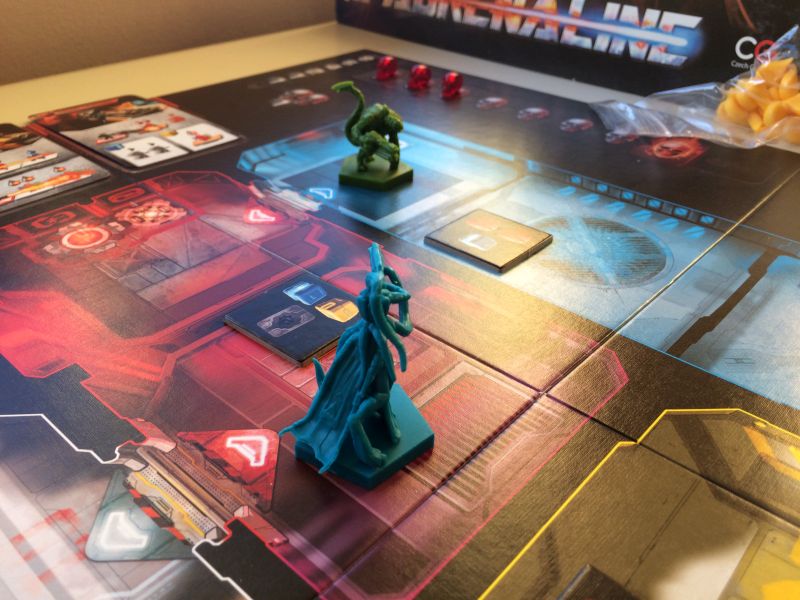 And yet while this all may sound a little like homework, Adrenaline is very much a beer and pretzels game that we had a blast with. While with many other euros these elements would slow a game down with thorough analysis, the crazy powerful guns, miniatures and board all scream pulp light hearted fun that many video game players will love. You’ll simply be having fun trying to make super combinations with your weapons, chuckle as you use your power glove to punch one of your friends and then move straight through him to punch another character and land the killing blow. I gleefully giggled when I shot my heat seeking missile to land the killing blow on a player in another room, and we all chuckled to see a character teleport to snatch the shotgun out from in front of one of us and fire it directly into their face. Well, all except that soldier.

Adrenaline is fantastic for FPS video game lovers with the best integration of the theme and great euro mechanics that could easily be used as a way to introduce PC/console gamers to the hobby. The mechanisms are streamlined with lovely components (real little red skulls), great miniatures (the generic Doom marine & and the giant smiley face robot) and a bucket load of weapons that all feel quite different. For gamers there is a solid euro here, with enough meat on the bones for you to enjoy your play-throughs and have a lighter fair that adds a touch of zing to your strategic board game nights. 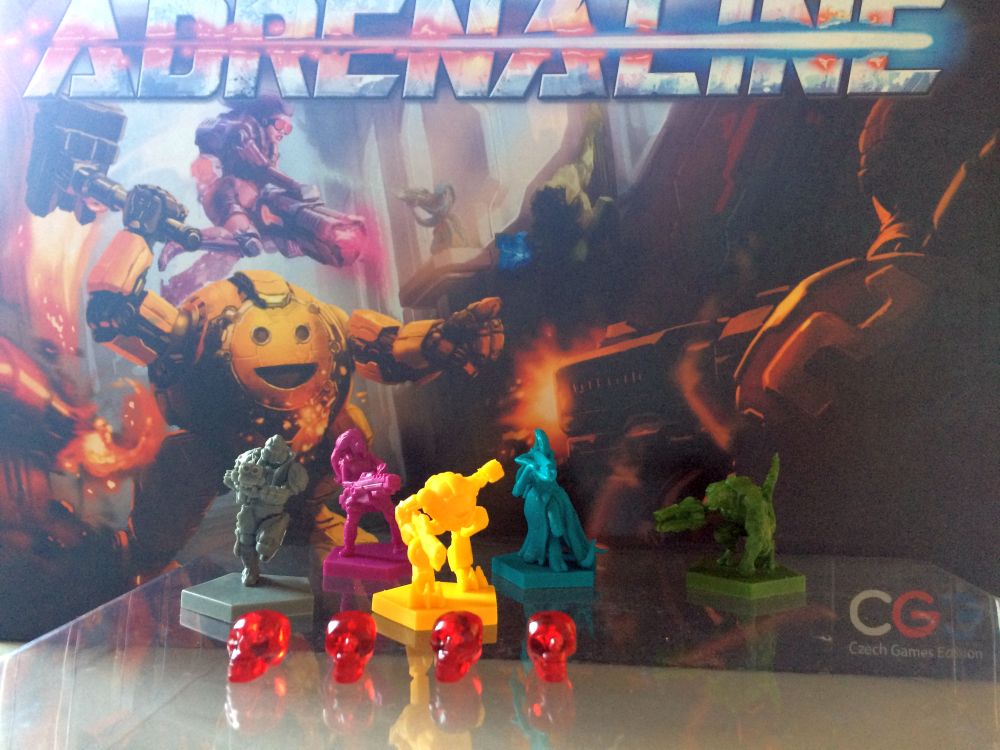 However, the theme is not going to appeal to everyone and those without the nostalgic memories of killing your buddies in death matches and playing older first person shooters may not resonate with the title. The maps, while different sizes and layouts for different player counts don’t really add anything to the game and for players looking for either an Amerithrash or Euro game may find that this doesn’t scratch either of those itches enough and falls into the doldrums in the center. More so than others, I feel the Adrenaline experience is weighted on your expectations and as a unique creature in the wilderness of games it may not fit in with many players who expect certain elements from their games.

That said, Adrenaline is a solid alternative Euro game that ticks so many of my nostalgic boxes. I never took multiplayer first person arena shooters seriously when I was in university, and now in my board gaming adulthood I’m loving Adrenaline in the same way. It’s a quick and dirty euro romp, where people will die through amazingly impossible headshots, get hit in the back of a head by a rocket, limp around a map searching for that one kind of ammo and take aim after teleporting with a shotgun to make a buddy eat some lead. 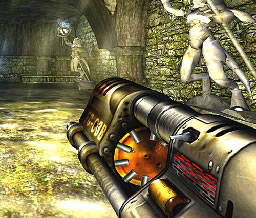 Adrenaline is a game that is very much a beer and pretzels affair, but heavier than the usual games of that ilk. While we loved the light euro strategies combined with the nostalgic FPS themes and fun to pull off combos of the weapons and powers, there may just not be enough meat on its bones to have the strategic depth of the Euro mechanics it bears and gamers expecting that me be left wanting. If you embrace the light tactical strategies of telefragging, shot guns to the face and would love a video game theme to your gaming without the random luck of dice but also without taking victory too seriously, then make sure to load up for a game of Adrenaline.