It’s still convention season here at Cardboard Quest. Essen Spiel opens today for Europeans which heralds a four day board game fair with over 500 new titles launching. I know we make jokes about Christmas being showcased 3 months before the actual day, but the Germans are already filling their stockings with great games. If you haven’t seen some of the great titles being launched at Essen, check out Paul’s Essen Shills article where he flaunts his wishlist in front of our noses. The Voyages of Marco Polo sailed past all competition to win the Deutscher Spiele Preis Best Adult Game award which will be awarded during the game fair.

Locally, rAge Expo 2015 will once again be opening its doors at the Coca-Cola Dome for South African gamers and our very own Paul Nain (@grim_tenmiles) will be wandering the floors taking photos of pretty much whatever takes his fancy. You’ll find him mostly around the Unplug Yourself section drooling over pretty boxes in cellophane, converting digital gamers to the darkside and just being pleasant (Which is why we sent him and not me). Go say “Hi” and tell him the greatest thing you’ve played this year and why he MUST own it. He’ll then probably go buy it.

Local distributors will have some great new titles for you to try out, including Rum and Bones, Blood Rage, Mysterium, Thunderbirds and the 2nd edition of the Game of Thrones Card Game. I cant wait to try this out, and if it turns out to be the LCG I’ve been waiting for, I forsee many tournament days in the Fires of Our Lord! 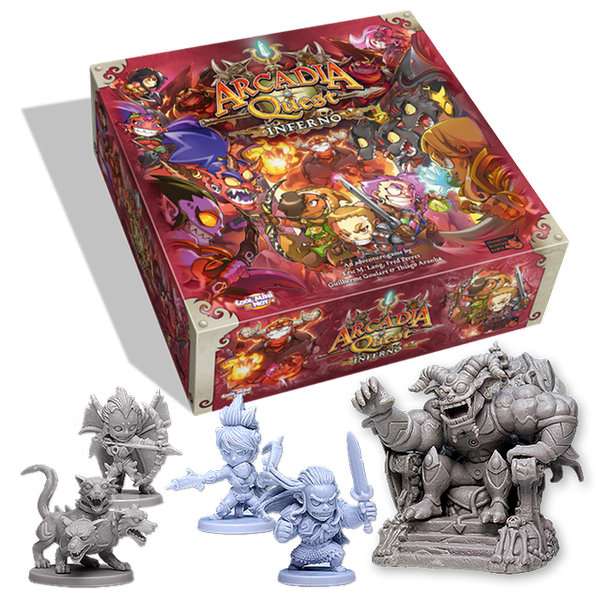 Chibi Demons and a Campaign that descends into the Inferno. I’m sold!

On to the general news and Cool Mini or Not have dropped a new box image of the upcoming expansion to Arcadia Quest, called Inferno. Think classic Chibi devils and Demons that four new guilds will descend into the Abyss to conquer in this standalone expansion. New terrain cards that make traversal treacherous and corruption weapons that affect players when equipped combine to make this a worthy successor. The Kickstarter will be coming shortly and I can already feel the demonic pull towards the pledge button.

Asmadi Games is running a Kickstarter for Innovation, a fantasic tableau building card game by Carl Chudyk. Innovation sees players discovering new technologies which evolve their civilisation, not only scoring points but also affecting other players through your developments. Sporting a much cleaner design and all the existing expansions, as well as two fresh ones, this game was high on my wishlist. Sadly, outside the US, Iello holds the licence to Innovation and therefore this game would need to be sent to an American address and then redirected to South Africa should you want to back this one. 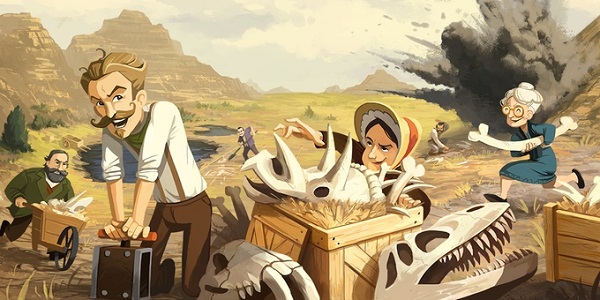 And here we were thinking that archaeology was a noble profession…

The Great Dinosaur Rush from Ape Games is looking to be another interesting game from Scott Almes (Tiny Epic Series) which sees players digging up dinosaur bones in a worker placement style phase and then using the different bones to build dinosaurs in front of them, which are then scored on various characteristics like ferocity at the end of the round. Players can also engage in nefarious acts to get ahead of other players and draw notoriety tokens. Be the most notorious person and you’ll lose all your points but there are advantages to being slightly devious. Looks like a great new theme and a good concept to check out.  $40 ( +$30 shipping to SA) will net you a copy of this neat looking archaeology game.

Savage Worlds has hooked me after my first play session, and the reprinting of Rippers Resurrected is definitely getting my backing at the PDF Level. Rippers is a fantastic Savage Worlds setting of Gothic Victorian Times, similar to that of popular TV show Penny Dreadful.  As a party of “Rippers” you’ll face classic supernatural and Gothic foes from Classic literature, such as Dracula and Jekyll and Hyde in the defense of the innocents. Using steam powered technologies, powerful magics or even arcane biotechnology of grafted monster appendages that have been ripped from your foes you’ll face everything that screeches and bumps in the night. $35 will get you the Game Master and Player PDF Guides and if you want it all, there is a $100 (+$70 shipping to SA) softcover version with Bennies and custom decks.

Lastly, carrying on with our theme of board game bling for the week, we have a couple of project that have caught my eye. Wyrmwood Gaming are producing Hero Vaults  for you to carry around your RPG dice and mini’s in style. Crafted from a variety of beautiful woods and bonded with magnets, these elegant crafted designs are truly the epitome of quality board game accessories. $38 (+$15 shipping to SA) will get you a base wood set with a 10 polyhedral dice set in gorgeous colours. In a similar vein, Elderwood boxes are producing custom SpellBooks for you to carry all your gaming accessories. Whether you play CCG’s or RPG’s, you can customise your book with foam inserts for whatever poison you pick. Starting at $70 (+ $15 shipping to SA), you’ll have a unique tome of treachery to carry whatever you need. 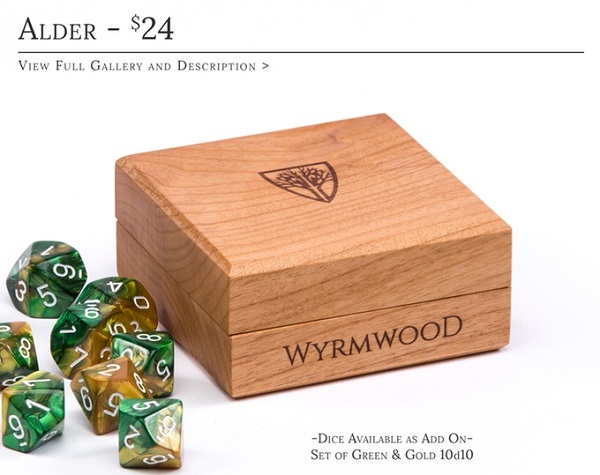 While definitely not a necessity, these Dice holders are beyond beautiful

That’s it for this edition of the Gazette. Who’s going to rAge? What are you guys excited to play? Please go and find Paul and get him to take a photo with you for our Instagram feed from rAge. Next week he’ll be feeding back on everything that happened and I’ll be sharpening my knife for backstabbing in Game of Thrones to ensure I don’t miss rAge for another year.