It’s December, the holiday season is upon us. We’ve been busy preparing our bodies (for feasting), as well as our wallets (because one can never have enough games, right?). But we’ve also been productive this week on the review front. We’ve sparred with Antoine Bauza and Bruno Cathala’s 7 Wonders: Duel, and Epic almost caused an inter-office brawl (which would have been an amazing feat considering it was a Skype conversation).

Richard Garfield’s latest design is a drafting game called Bunny Kingdom. This could be the premier game to feature bunnies (no disrespect meant to Vlaada Chvátil’s Bunny Bunny Moose Moose).  So far we only know that the game will be released in May 2016 by IELLO Games, and that it’s a drafting game featuring rabbits. We’ll share more details as we get them, but in the meantime marvel at the box art.

And using the word “marvel” was a terrible way to introduce yet another Munchkin game. Yes another Munchkin game, but this time they’ve teamed up with a little-known company called Marvel (don’t know if you’ve heard of them) to present to you… Munchkin Marvel Edition. By the look of the box I’m verily guessing that this USAopoly-published title will have a more serious tone when compared to the traditional Munchkin products by Steve Jackson Games. How will a Munchkin game fare without its inherit Munchkiness? Find out next year when it will be available in the US and Canada April 2016.

Finally the moment that digital board game enthusiasts have been waiting for, the release of the Dominion app (for both iOS and Android). Whether that’s sincerely excitement to play the original deck-building game in the privacy of their lavatories, or relief because the game has been in development for three years (after being semi-launched, then dragged back to a drawing board). BoardGameGeek and Pocket Tactics’s David Neumann’s headline pretty much summed it up: 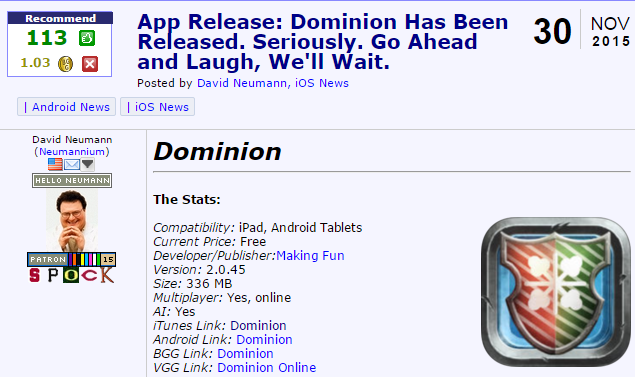 The genuine excitement has been slightly dulled by the cost of the expansions ($15 each) the app’s online-only approach, and perhaps that it’s currently only available for tablets and iPads. Though at least the base game is free if you want to test the waters. Quick, download it before it disappears!

Jail Break is a strategic tabletop game in which each player competes to escape the world’s most dangerous prison. It plays 2-6, and features a different prison layout for each game to increase the replayability factor. Jail Break will be published by Paper Street Comics who have a history of printing graphic novels / comics. In fact, one of the added incentives of the campaign will be that each backer gains access to the entire Paper Street Comics catalogue for free on iTunes while the campaign is ongoing (almost a month left still).

In Fantasy Fantasy Baseball: A Roster Building Card Game, players each manage a team of magical fantasy creatures during their typical season of baseball. This is a drafting title for 2-5 players, and a game takes about 10 minutes per player. This has almost been funded, but if baseball is not your scene, CSE Games is planning to release Football and Hockey variants.

REMINDER: This weekend UCON takes place at the UCT campus in Cape Town. Gaming tournaments, cosplay competions, boardgaming (obviously) and more – you will find more details on their official Facebook page. Thanks to Genshiken UCT and Zombiegamer for organising this event.

And that’s it for the week’s news. Next week we’ll be looking at our own personal gaming picks for the upcoming holidays just in case you needed some assistance in spending your annual bonus. But right now, I’m off to buy Ant-Man on blu-ray (see how this Marvel marketing machine works? DAMMIT).