After the mad rush of news and excitement that was Gencon 2016, things have calmed down to a semi-normal state at the CBQ. No more sessions of feverishly checking newsfeeds to see what new games are being announced, and Stuart can no longer ask friends to bring back any of the games on his extensive Gencon wishlist (you’ve got enough Stu).

This week on CBQ, Stuart went back in history to Egypt’s golden age with a review of Ra, which was also our very first review of a Reiner Knizia game (for shame). Paul is busy finishing off a review of a little game called Scythe (you may have heard of it), we might be needing a larger table for that. And myself? I’m sitting at my PC, finishing off a news article, with a cat nestled between my chair and my neck.

Richard Garfield’s King of Tokyo and King of New York has been amazingly popular for Iello, which is why a new range of expansion packs are being released. The first release of the new Monster Packs range features a very familiar theme – Cthulhu.

After the amazing success that was achieved with Pandemic Legacy, Rob Daviau is giving another popular board game franchise the Legacy treatment. Daviau is teaming up with Ted Alspach and Bezier Games to release Ultimate Werewolf Legacy in 2017.

“In Ultimate Werewolf Legacy, players and the village itself have attributes that are retained between games, with events taking place in the first games having effects that ripple through remaining games. Make a bad decision early on, and it can haunt the village for years to come! Players can earn titles, which provides them with special abilities in future games, regardless of their role.

The full campaign is divided into chapters of about three games each, with each chapter designed to be played in a single night with the same group of players. Each chapter is standalone so that different players can play different chapters, but since early chapters affect successive ones, it’s an even richer experience to play through more than one chapter. Even better, the chapters are designed so that you can switch moderators between games.

Ultimate Werewolf Legacy uses the basic gameplay found in Ultimate Werewolf and adds a number of twists and Legacy-style mechanisms to give the game a richer, more immersive experience than werewolf players will find any other way.”

Interesting approach, though I kinda like my Werewolf experiences in small doses, and with no need of a moderator – which is also an absolute shameless plug for my review of One Night Ultimate Werewolf.

Prepare to flaunt weird hand gestures at others with Rock Paper Wizard from Wizkids. Partnering up with Wizards of the Coast, this is a fast paced card game featuring the most popular spells from the Dungeons & Dragons realms.

“Rock Paper Wizard is a fast-paced card game for 3 to 6 players who must try to outwit their opponents in an epic race for loot!

Choose your wizard’s spell and cast some magic by repeating one of the hand gestures found on the cards in front of you. Everyone says “Rock, Paper, Wizard” aloud, and upon saying “Wizard”, forms a hand gesture and points it towards a target. Each card describes the spell’s effect, which can push opponents towards the exit, advance themselves towards the hoard, or manipulate the coins wizards must collect to win.”

Rock Paper Wizard will be available in early 2017. 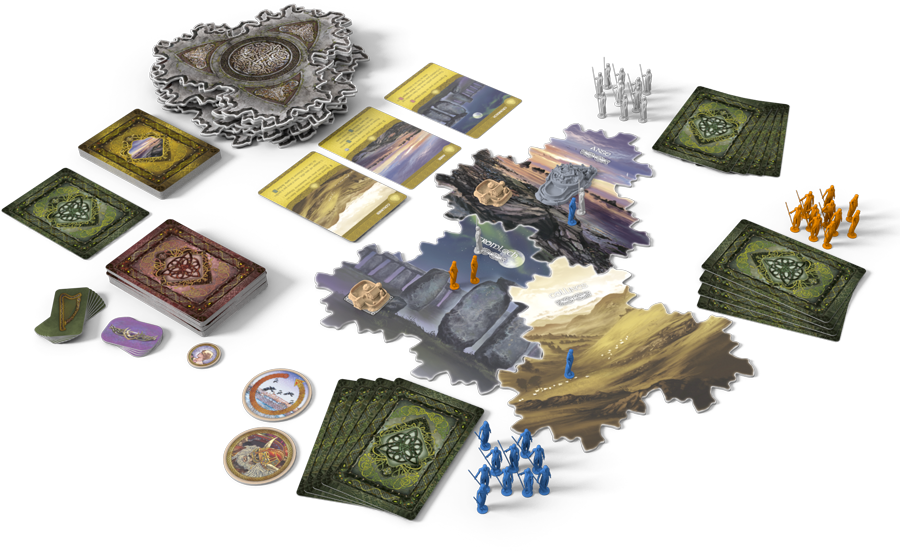 Next month sees the release of Inis, the next title in the next game in the Cyclades /Kemet series. Described as a game of “Irish Myth and Epic Exploration”.

“In Inis, you and up to three opponents explore Ireland, populate the land with your clans, build sanctuaries and citadels, and fight for territory. Multiple players can become pretenders to the throne, but only one can become Ard Rí, or High King. Created by Christian Martinez and the team at Matagot, Inis features an elegant system of gameplay that combines card drafting and area control. Its stunning original art brings to life the heroes and legends of Celtic mythology, and a modular puzzle board sets before you an ever-changing Irish landscape. “

So, Chickapig. Let me get this right, so you cross a chicken…. with a pig… and then you have a chickapig. And obviously there’s a pooping cow. I can’t even make these things up.

“Break your flock of Chickapigs free while dodging opponents, hay bales, and an unruly pooping cow in this strategic board game. Chickapig breeder and game creator Brian Calhoun joins forces with his farming buddy Dave Matthews to bring this game from the farm to table.”

The game is describes as a mix between chess and checkers. But with that pooping cow included. Amazingly, this game has been fully funded, and with just over a day left to run, the project is sitting with about $80K in pledges. And that’s with absolutely no stretch goals.

Here is your ultimate chance to be a super villain…. with spelling. In Word Domination, each player is a criminal mastermind, competing with each other to steal artifacts. Each artifact represents a specific letter, and when you gain access to it, only you can use it to create words. Designer / evil genius Jeff Beck describes it as “Scrabble meets Risk”.

“Part strategy game, part word game, Word Domination is a completely unique experience that lets all kinds of players excel. Some players enjoy the freedom to use any letter on the board, allowing their inner word ninja to come out and spell ridiculously long words. Others prefer a more strategic route, carefully selecting which letters to use to control the board and mess with their opponents.”

Still early days for the campaign, but this has also been funded, reaching its modest $10K goal easily – currently sitting at $21K. Also, word ninjas, is that a thing? I hope that’s a thing.

Herbaceous is a relaxing card game for 1 to 4 players, wherein players compete to grow and store herbs.

“Everyone has a green thumb when playing Herbaceous. Relax while enjoying this beautiful and elegant game of picking and potting herbs. Pot the best collection of herbs in your different containers, but don’t wait too long or your friend might grab them first.”

It’s a good time for digital board games. So much so that we’ve decided to do a whole article on them – coming soon.

This weekend Stelcon 2016 is taking place at the Academia Hall in Stellenbosch, Western Cape.

The event will feature the usual fine geekery – craft stalls, merchandise, a cosplay competition, and various gaming tournaments and demos. R40 gets you in.

And that’s a wrap for the news this week. Watch out for Paul’s thoughts on Scythe, hitting our site tomorrow.

Have a good gaming weekend!