There have been a few awkward silences and a lot of reflection in developments inside of the board game industry this week. While the “in session” light has been illuminated in the therapists lounge, gamers have had a little more to deal far more long term trauma than the demise of “Hiddleswift” with two of our doting tabletop parents separating without a mention of what went wrong? Was it something we did with failing to pre-order expansions? At the laywer’s office across the hall we can hear the slamming of telephones, article clerks frantically pressing out court papers as legal papers are filed. All of this while accountants account for the fall out from Gen-con and the inevitable budgeting for the gift of games for the festive season. It’s all a little stressful, but we can rest assured that through working through the conflict we develop better versions of ourselves and our gaming shelves. Right?

So Fantasy Flight Games and Games Workshop have decided to call it quits after rumors have been circulating the industry of FFG’s infidelity with its miniatures of Terrinoth over the Warhammer Fantasy troops that we all know and love as well as designers having possibly being let go while still formulating expansions and new modes for Forbidden Stars. Gamers will now have to frantically make the effort to get hold of every last moment possible with fleeting experiences of Forbidden Stars, Warhammer Quest, Blood Bowl: Team Manager, Fury of Dracula & Chaos in the Old World not going to be available in the near future. Expect Skyrocketing prices and price gouging on eBay and the sad tears of realising these two parent figures will never be in the same room for your birthday ever again.

Dan Yarrington of Myriad Games (also associated with Games Salute) is being sued by former business partners Zev Shlasinger and Paul Gerardi for breach of contract and fraud. Horrible allegations of misconduct regarding poor management and fraud in regards to credit make this a horrific story to see in the industry we love. Games Salute has a tarnished public record in its own right and we just hope that legal channels will resolve this matter and that end customers of Myriad will not suffer as a result of these proceedings.

While many couples are falling apart, our friends over at Rule and Make (our Entropy review here) are partnering with fellow Australian sweetheart Table Tyrant Games and together will aim to bring Smiths of Winterforge into the world through Kickstarter later this year. We wish them all the best with the project and you can take a look at the initial print and play to see if its something you will want to back

La Granja, the much beloved Stronghold Games title that has never made it to South African shores, is getting a standalone dice game version called: La Granja: No Siesta! This dice title aims to incorporate all the farming elements, hiring workers, and goods storing to distill it into the ever popular rolling and drafting genre. It’ll be a shorter farming experience for all those involved and should arrive in international stores in November with players drafting to get all the necessary resources to generate the most victory points! 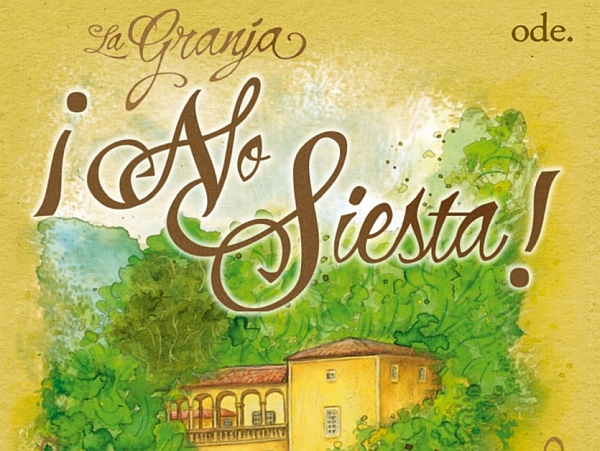 Micro Robots will be released soon from Z-Man Games, building on the previous success of Ricochet Robots. Players in Micro Robots will randomly lay out 4 game boards with a starting robot location and a unique ending location by rolling die combinations and then race to deduce the  amount of moves necessary to get the Robot to the end position. First player call it out and to get it right gets a victory point, but getting it wrong will lose you a victory point. First player to 5 points wins and its an interesting take on logic games that can introduce some novel twists with introducing robot movements abilities. Keep an eye if this is something you’re interested in.

Mighty Boards have launched their first Kickstarter project called Vengeance and its just like 2 Tarantinos, a Van Damme and a twist of Keanu all shaken together and poured into a glass that kicks like a mule. In Vengeance, you’ll play a protagonist that has been wronged and left to die, only to rise up again and through sheer force of will, incredible training montages and some of the most fortuitous fight scene setups to defeat the evil of this world. It screams of my childhood movies like Kickboxer and Bloodsport and filters through the poisoned layers of Kill Bill to end up with a dash of John Wick, which makes for some of the most entertaining pulp fun I’ve ever had. You’ll pick a hero, use the montage to create new abilities of dice combinations to be used in battle and then attack the various levels of the gangs through acts to reach the big bad dude. You’ll be rolling dice that when the correct faces can be locked with a combo card, will allow you to decimate hordes of enemies before you further train to unlock new combos to take to the Big evil. It’s got flair in its presentation, more great minis and an almost universally appealing theme to the 10 year old ninja wannabe in all of us. 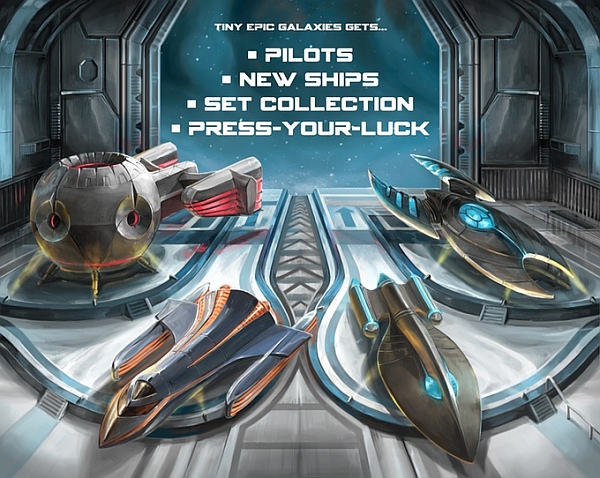 For Tiny Galaxies there is no option but to become even more epic and with Scott Almes’ Beyond the Black expansion for Tiny Epic Galaxies you can do just that. You’ll get pilots for hire, brand new ships to explore the voids of space that will either bring you back something magical to share with your worlds or something terrible that will plague your ship, and people who venture into the black depths. New Cards, new missions and more fun make this a no brainer for those who own and or love Tiny Epic Galaxies.

Lastly, I’m mesmerised by the great looking design and really unique theme that is Sagrada from Flood Gate Games. In Sagrada, players will be using coloured dice drafting to create beautiful stain glass window designs much like those seen in gorgeous Spanish churches in Barcelona. You’ll have toll cards that allow you to manipulate and use dice in certain ways, and you’ll need to match patterns based on the window design you’re looking to complete but also keeping in mind that no identically coloured dice can be placed adjacent. Described as a dice drafting Sudoku style this has definitely caught my eye with more complex designs giving more victory points. I’m thrilled that games like this are already funded on Kickstarter and it’s definitely one that I have my eye on. 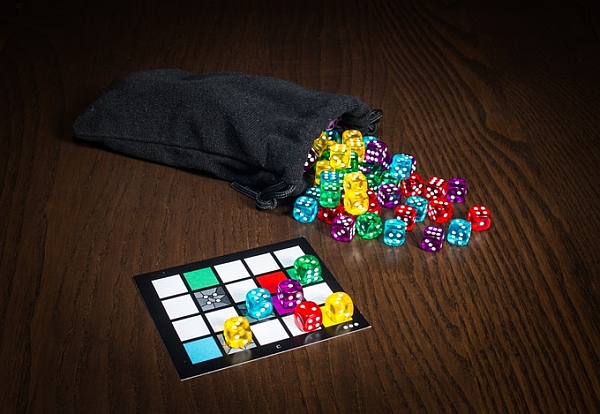 And that’s it for this week’s news! Buy all the Games Workshop FFG partnership products you still want to own, get out and play some more games and check out Paul’s feature coming tomorrow where he waxes lyrical about visuals or somesuch. Also if you haven’t, give Jason’s piece on board game apps a read and we’ll have some great reviews for you next week.