Hello darkness, my old friend. I’ve come to talk with you again. Because Stuart is honeymooning it up (again, you might ask? yes, again) and Jason is doing his best Atlas impersonation except that holding up work is a tad less glamorous that holding up the sky. It’s kinda like the Avengers with Thor away on some secret quest and the Hulk AWOL. It’s up to Iron Man to save the world yet again. Yes, I am Iron Man in this analogy. Yes, this analogy is grossly inaccurate – Stuart looks nothing like Thor.

New game announcements have obviously slowed with Essen around the corner, but there’s still plenty of window shopping to be done this week so let’s get to it! 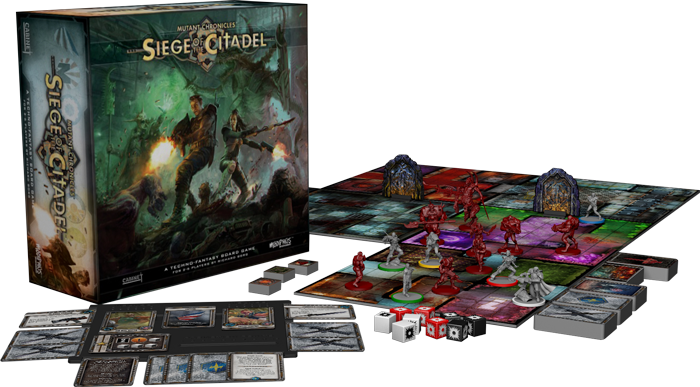 There is one major announcement this week, though no surprises that it’s from FFG. In a refreshing change of pace, they’ll be releasing Provence: The Olive Farmers early next year…oh wait, too many tabs open in Firefox again. Fans of all things olive will have just have to keep dreaming the dream, but on the flip side if your eyes were wowed by the KS campaign for Mutant Chronicles: Siege of the Citadel but your wallet was dismayed by those shipping costs, FFG have partnered with Cabinet and Modiphius in a publishing deal that will bring the game to retail once all KS pledges have been fulfilled. This cooperative miniatures game set in a techno-fantasy world still has around 30 hours left on KS if you can’t wait for the retail version.

We missed out recently on mentioning that Alchemists will get its first expansion at Essen. I love Czech Games Edition’s charming worker-placement/deduction game so it’s almost a foregone conclusion that I will be picking this up. Alchemists: The King’s Golem introduces 4 new independent modules, including  Startup Funding to customise your initial resources and The Golem Project in which you’ll attempt to animate, you guessed it, a golem. Perfect for those who feel they’ve cracked the puzzle that is the base game. 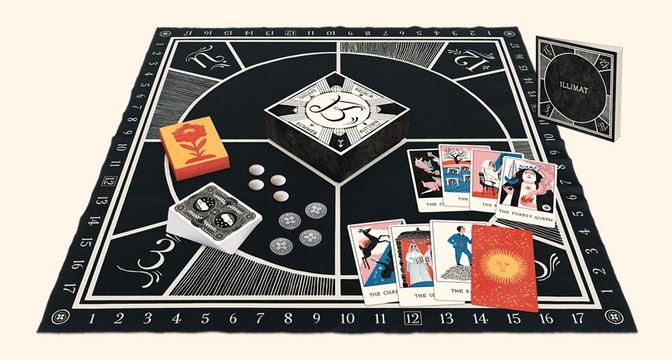 I suppose it speaks volumes for how far our hobby has come that the lines between it and other mediums of entertainment are blurring in the best of ways. We’ve seen a number of recent highly rated TV series treat boardgaming with the respect and care it deserves, and now it seems that the same is happening in the music industry. If you loathe local radio as much as I do, you’ll probably have heard of the critically acclaimed band The Decemberists. Turns out, they’re boardgamers like the rest of us, to the extent that an idea which started as a photoshoot concept six years ago is now a living breathing Kickstarter campaign called Illimat. It’s just the kind of unusual game I hope Kickstarter sees more of. Oh, and the creator of Gloom, Keith Baker, is involved! 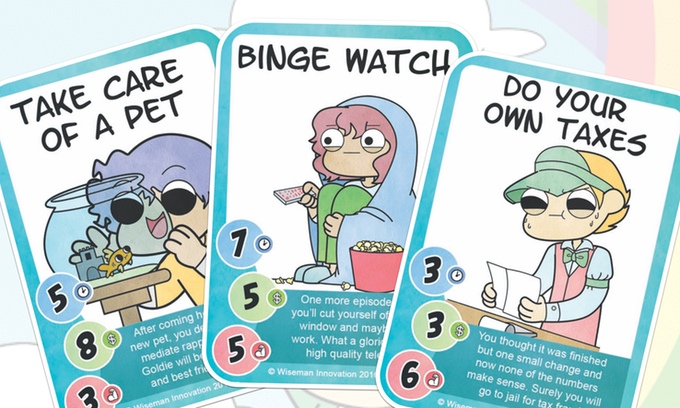 In keeping with the quirkier side of KS, and I title I can relate to entirely – Pretending to Grownup. A casual card game featuring 100 unique cards, the aim of the game is to be the most grownup using the resources of time, money and energy. But you can bend the rules using the magical Unipegasaurus card, because being ALL grown up is no fun at all. 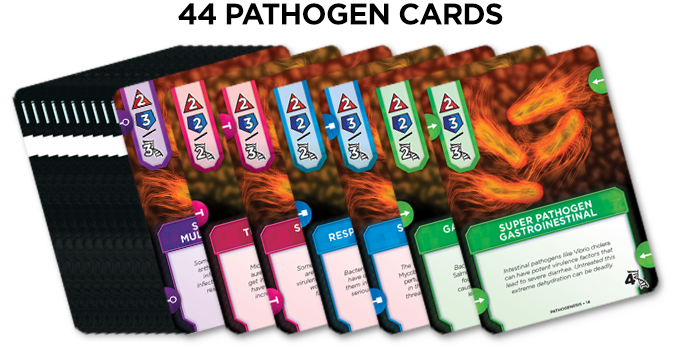 Sick and tired of losing Pandemic? Wanting to know how it feels when the shoe is on the other foot? Pathogenesis is the game for you! In this deck builder, you play as pathogens attempting to overwhelm a body’s immune system. What makes this a genuinely interesting proposition is that the game has multiple modes of play such as solo, competitive, cooperative and is also based on actual science. Not only that, but scalable difficulty and a strong graphic design make for a pretty complete package. And the game is available to demo on Tabletopia. 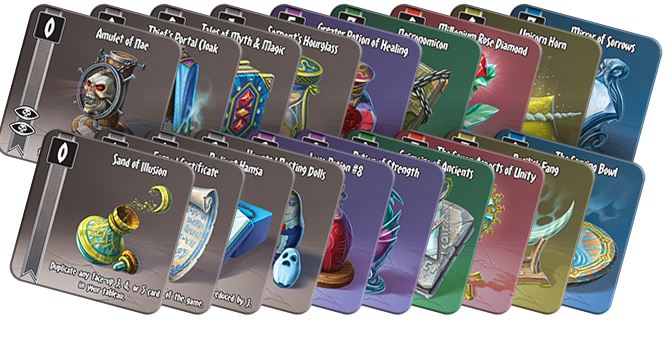 Daily Magic Games have done pretty well with their Valeria campaigns, and they’re hoping to maintain that success with 10 Minute Heist: The Wizard’s Tower. Welcome to the Dungeon proved a fantastic example of how microgames can look as good as they play, and 10 Minute Heist clearly paid attention. The tower holds a number of valuable items, but it’s hard to know which trinkets are cursed. Players start at the top and make their way to the exit below – you can take any item you like and move as fast or slow as you want, but a bonus waits the players quickest out of the tower. There’s even a print ‘n play for you to try before you buy. 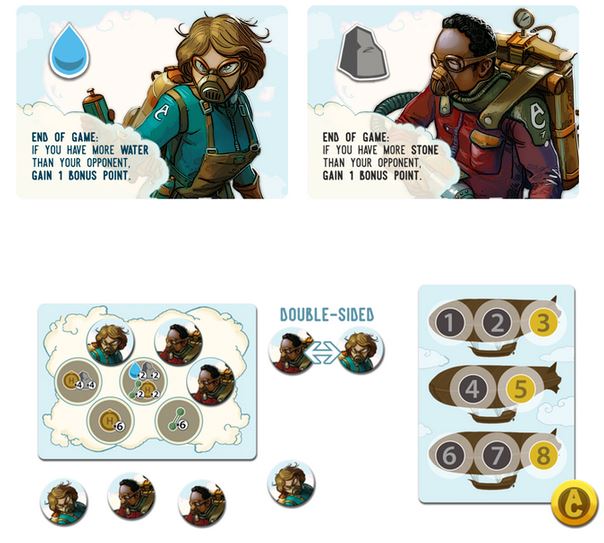 A euro style resource management game of only 18 cards? And packaged in a small vinyl wallet to boot? Ahead in the Clouds has all the makings of the perfect pocket-sized two player game for those who want a more challenging, less casual experience. 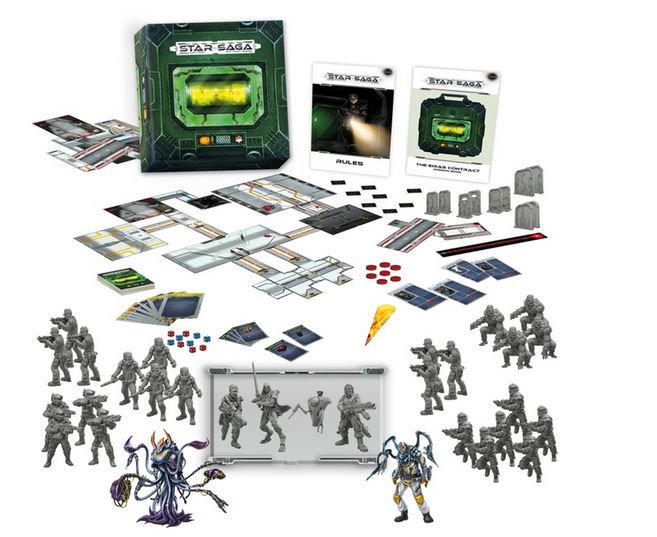 But where are my sci-fi dudes on a map, I hear you lamenting? Fret not, I got you covered. The successor to Dungeon Saga, Mantic Games build off their Warpath Universe to bring us Star Saga: The Eiras Contract. All the excellent minis are there and accounted for, but where Mantic are really trying to differentiate Star Saga from the slew of other sci-fi dungeon crawlers, is with the focus on deeper narrative elements. It’s not the first time I’ve heard a studio promising this approach, let’s hope Mantic actually manage to pull it off.

In app news, the digital card game Shardbound was demo’ed recently at TwitchCon. In what’s described as a combination of Hearthstone and Summoner Wars, you can sign of for early playtest access here. Stuart and I have both been sinking a great deal of time into the excellent Duelyst which has a similar approach, but Shardbound is clearing aiming for the Twitch streamers as it has built-in elements that allow viewers to jump in and play under the banner of their favourite Twitch streamer. 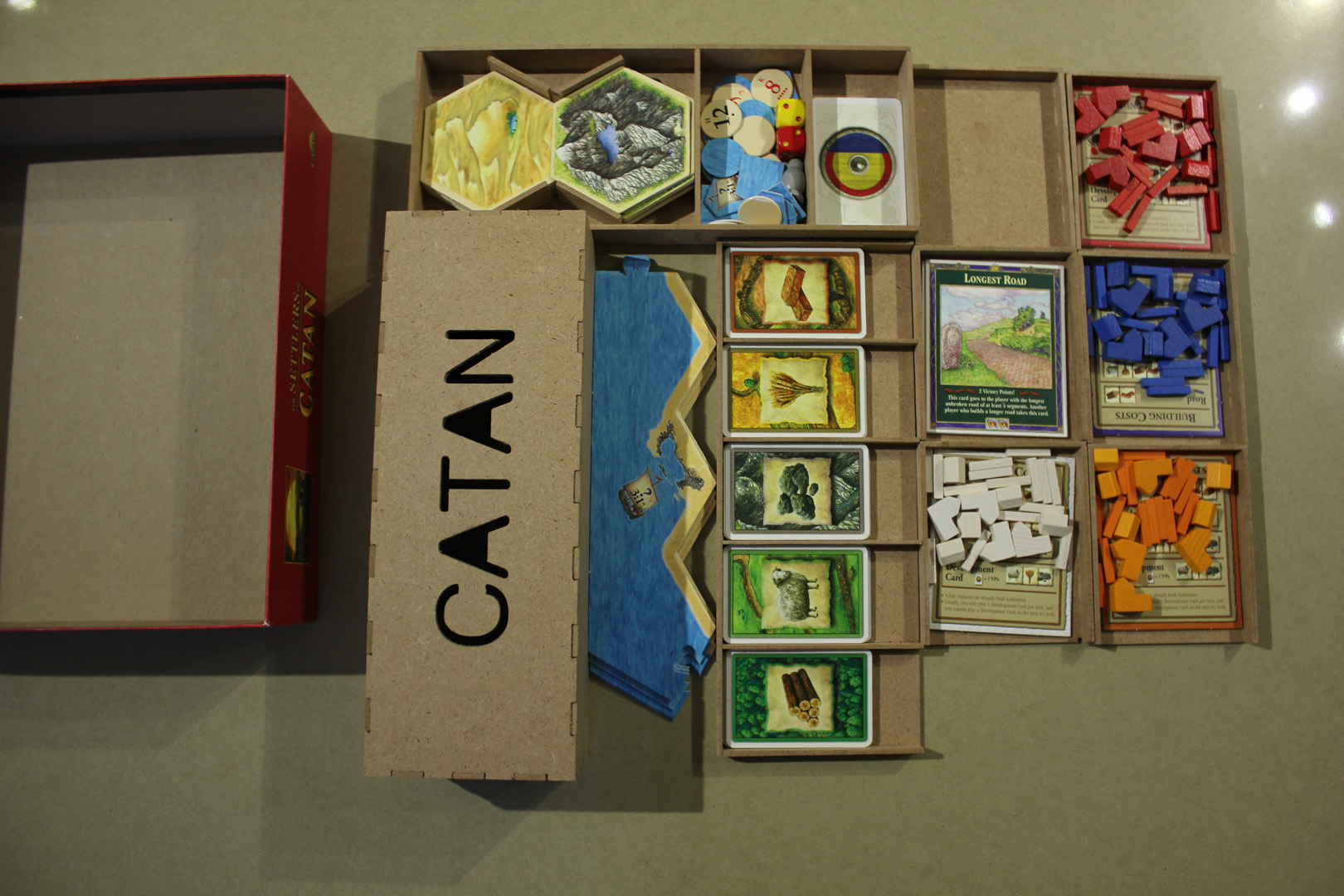 Lastly, our friends over at Just Signs are branching into custom inserts. Here’s a look at a custom Catan insert they recently designed, if your Caverna or your Imperial Assault is the modern day equivalent of Pandora’s Box, hit them up and perhaps they can restore order from the chaos!

This weekend it’s finally rAge time! Forget all the bland digital content they’ll be trying to entice you with, instead make a beeline for the boardgame section – I guarantee it’ll be the stand with the best vibe. Solarpop and Timeless will have a ton of demos for you to try, last year I was lucky enough to attend and had a blast! I’ve seen pics of Cry Havoc and Terraforming Mars and am totally not jealous. Not one bit.

Wherever this weekend sees you, there’s never a better way to spend it that around the table, gaming with friends. Enjoy all!