It’s not quite the fifth Day of Christmas just yet. No geese a laying or lords a leaping, although maybe I’m just going to all the wrong Christmas parties. I haven’t seen a partridge in a pear tree of late and I’m pretty sure SUSD’s reference pear doesn’t qualify. And though I’m certainly no Ebenezer Scrooge, I find myself agreeing more frequently with The Futureheads’ time-honoured lament. Yes lads, it was indeed better in the Eighties. 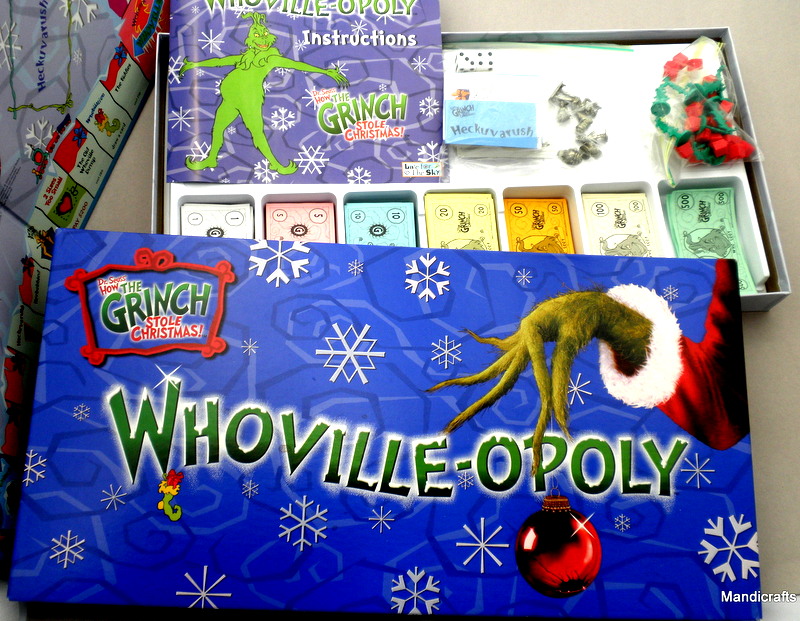 Thankfully however, relishing in the joy of gift-giving isn’t predicated upon oodles of Yuletide cheer. The magic of Christmas may have faded somewhat, but brightly wrapped parcels of ‘something to make you happy ‘cos you make me happy‘ will always be timeless. And besides, who wouldn’t want to give a boardgame as a gift – they’re the perfect gift! They’re incredibly easy to wrap, for starters. Take it from someone who spent a week of Christmas as a teenager wrapping presents outside of a Boardmans store – you don’t want to be wrapping an unboxed Weber braai, no siree.

Boardgames are also the perfectly sized of gift. Substantial enough to engender anticipation, but not ostentatious as to label you a show-off. Want to avoid appliances for the wife or socks and underpants for the husband? Boardgames. What better way to keep the family together after you’ve opened gifts than have one of those parcels be a boardgame? Totally the best presents ever.

And so to aid you in making the right choices, this week the acolytes of CBQ are putting together their lists of ideal games to give. Stuart suggested some stupendous stocking stuffers yesterday and tomorrow Jason will translate his words of wisdom to the digital page. For today, here’s my take on five guaranteed winners. And by guaranteed, I mean if the recipient doesn’t appreciate them, they weren’t worthy to receive them if the first place. Just a quick proviso – these aren’t necessarily my favourite games of the year, but rather games that have been well received with every group I’ve played them with. Everything on the list is in stock locally. 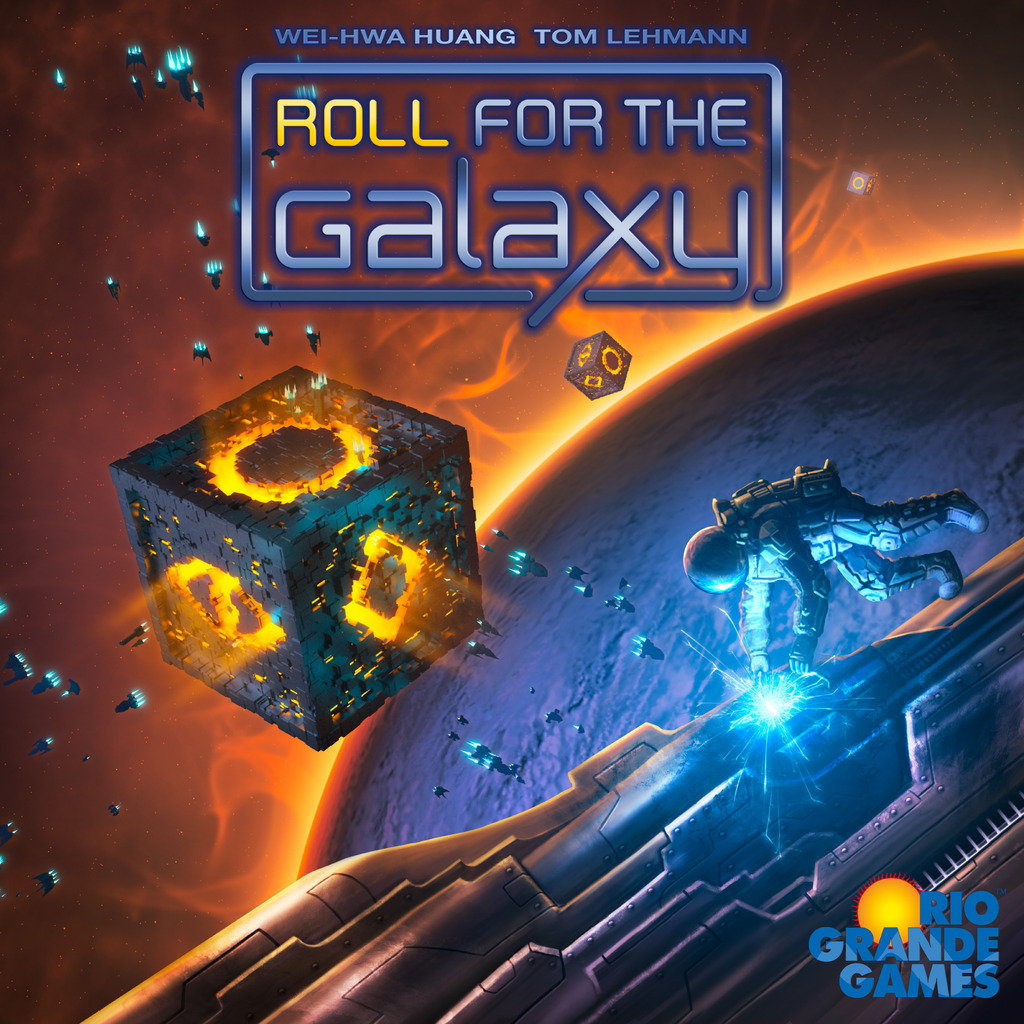 It’s not nearly as evocative as the box promises, but it’s still a cracker of a game

Roll for the Galaxy

Players: 2-5
Who’s it For: For those who enjoy rolling tons of dice, but want to engage their brains
List price: R950

This one is probably best suited for the more serious boardgamer in your life, although once learned it plays smoothly and quickly and might not be that much of a stretch for those more accustomed to Catan. Great at every player count and most importantly, it’s the type of game you just want to get better at playing. I’ll steal from my own review of the game in summing it up:

“What makes Roll for the Galaxy worthy of such praise is, as you may have guessed, the dice. Not just the material thrill of slamming at times nine or more of them onto the table, but the ingenuity so clearly expressed through the design.” 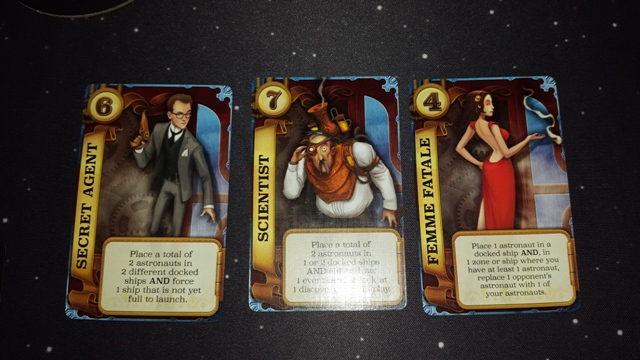 Saboteur card not shown here for your own safety

Some families love to spend Christmas in peace and harmony. Full bellies, calming carols and maybe an afternoon siesta or three. Then there are families who thrive on being competitive. Pictionary is never just Pictionary and Ticket to Ride is more cutthroat than a transport tender in Gauteng. MRP is a game for those families. Also, MRP looks appropriately festive? Kind of? Jason recently reviewed MRP and had this to say:

“All of this is happening, but amazingly you’re looking at an average game lasting only 45 minutes – time flies when you’re building an interstellar mining monopoly. There is very little downtime (selecting character cards eats up the most time), and each player is genuinely invested in the scheming and movements of others in order to (attempt to) stay one step ahead.” 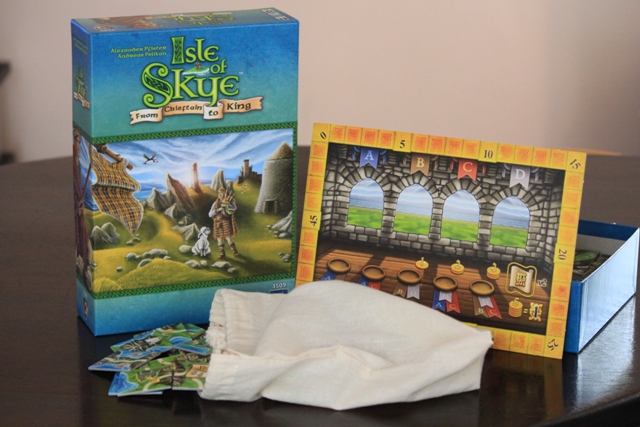 This game really threw my expectations out of kilt-er…

Isle of Skye: From Chieftan to King

Players: 2-5
Who’s it For: Turkey takes ages to digest. It’s a scientific fact that tile-laying games aid in digestion. The rest of the turkey isn’t going to eat itself.
List price: R599

I was genuinely surprised at just how much I enjoyed Isle of Skye. Easy to teach, a good amount of variability and great components – I’m sure you’ve all got that friend or family member who loved it when you taught them to play Carcassonne, here’s the game to really reel them in to the hobby. Isle was also recently reviewed on CBQ:

“as I quickly found, Isle of Skye is deceptive in its strategic depth, and lurking beneath the sturdy tiles and pleasant if unassuming artwork is a rather cut-throat and challenging game. I suppose I should have paid more attention to the title – when two or more chieftains challenge for kingship, the peaceful countryside is going to get a little noisy.” 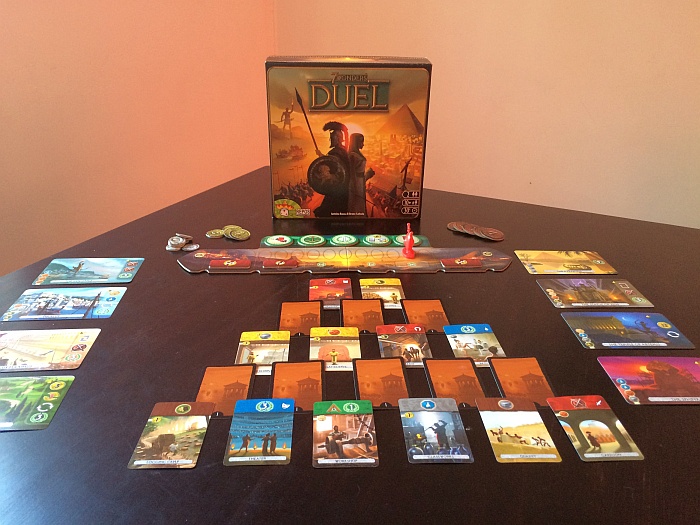 Truly a duel in every sense of the word.

Players: 2
Who’s it For: Those whose idea of the perfect date night is to build Pyramids or the Statue of Zeus.
List price: R500

Couples who game together, look no further. Quick, deceptively simple and yet deliciously devious – I for one can’t wait to lose to my wife over and over and over again. Such a tightly designed game and with a very different feel to its parent, Duel should under every Xmas tree this year. And Stuart thinks so too.

“While not only improving the 7 Wonders formula, Duel attempts to usurp the current world leaders in 2 player strategic board games. With military precision, scientific thought and setting a new standard for 2 player drafting, few are brave enough to stand in its path to glory.” 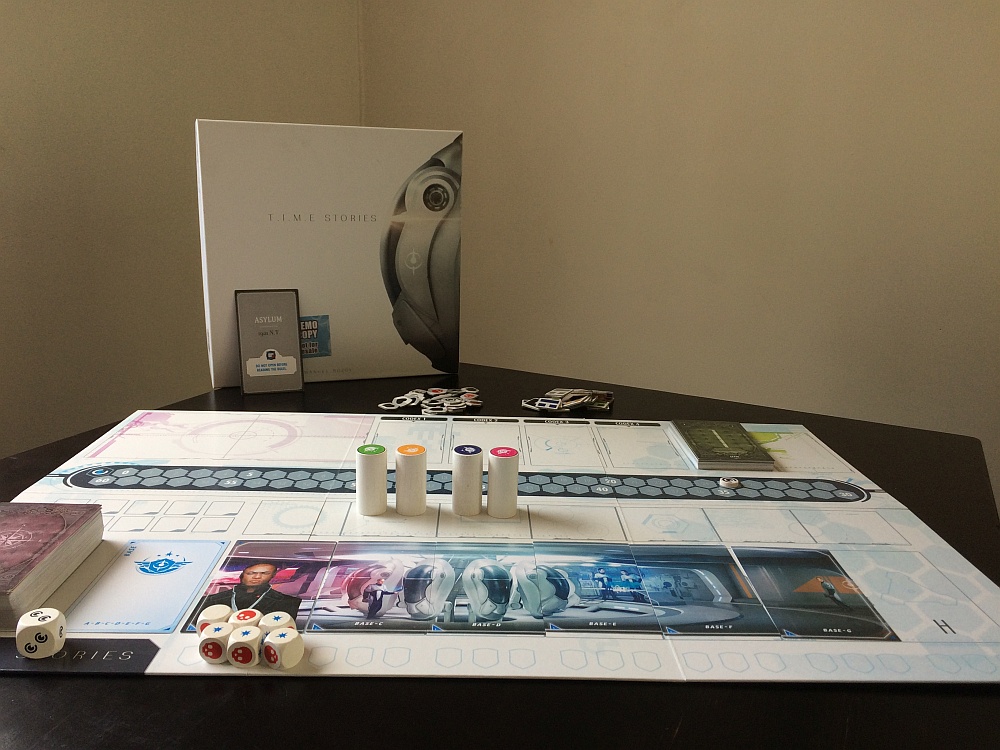 Players: 2-4
Who’s it For: For those who love A Christmas Carol and the idea of reliving the past
List price: R850

A controversial choice, perhaps, but let me couch it like this – the big gripe around Time Stories is the value proposition, that the amount of game in the box isn’t equitable to the cost. Well, what better way to remedy this conundrum than by giving it as a gift! Just make sure the recipient promises, in blood if necessary, to play it with you. In all seriousness, Time Stories has been the best board gaming experience I’ve had this year. I’ve run the Asylum campaign GM-style for two other groups and on both occasions experienced almost as much enjoyment as that first play. What makes this game so special?

“We got lost in the narrative, the puzzles, the characters and the world of Asylum as T.I.M.E. Agents and I haven’t stopped thinking about it since Saturday. Now excuse us while we go solve the mystery of a missing girl in 1992 as a plague sweeps across America.”

Keep an eye out for our review of this and the Artisans of Naqala expansion coming soon. I haven’t intentionally limited this list to 2015 releases, so I’d be remiss in not pointing out how great this 2014 release is. Glorious components and addictive gameplay, I really think the Analysis Paralysis complaints that get leveled against Five Tribes are a non-issue after you’ve played two or more games. If you spot a copy, grab it! 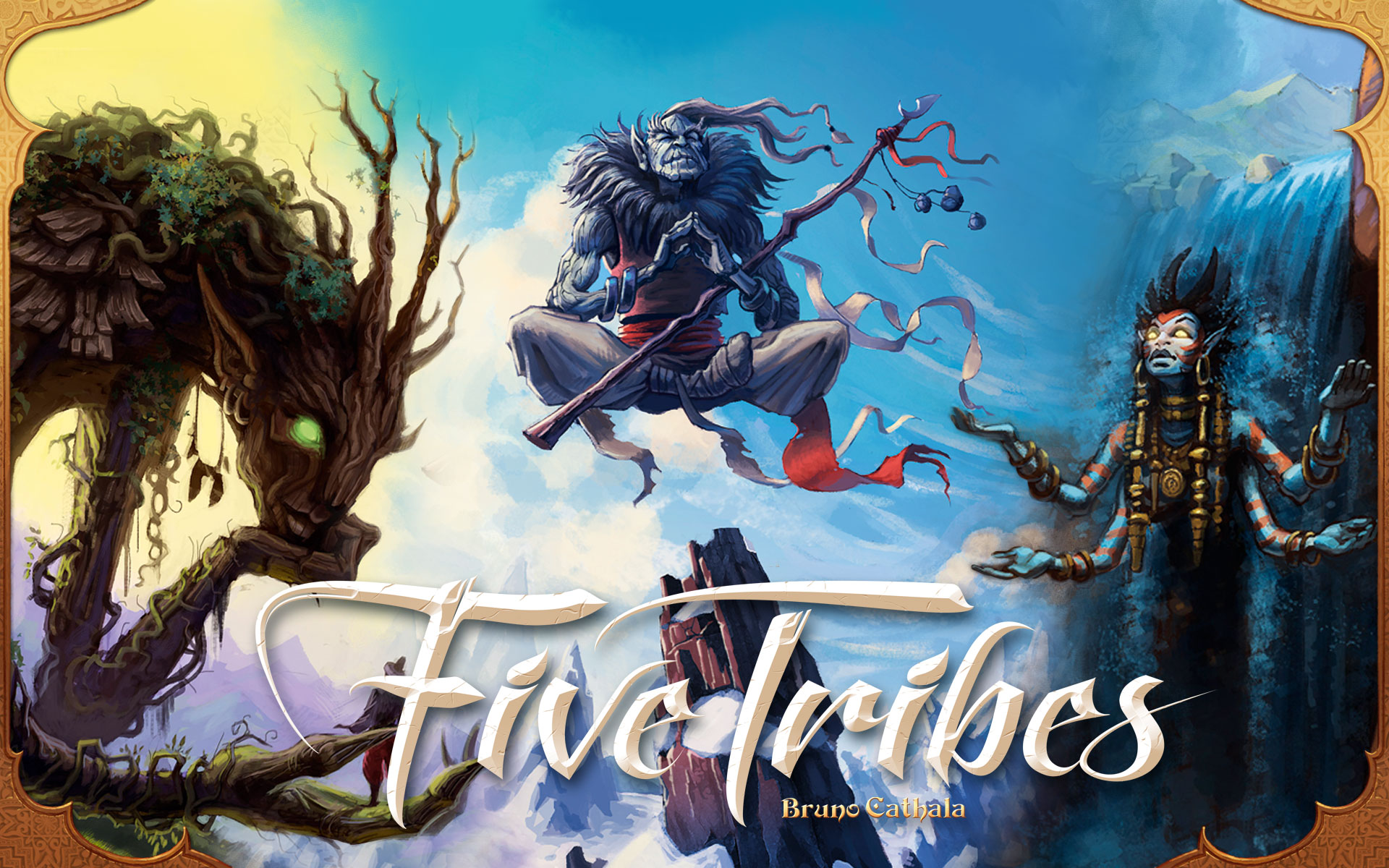 Board gaming is expensive. Thankfully there are a plethora of relatively inexpensive titles running the gamut from laugh-a-minute to seriously thinky. But where does that leave the hobby enthusiast, yearning for a spread of components to rival that of the most indulgent Christmas lunch? If you’re lucky enough to have a partner or a family generous enough to give you Blood Rage for Christmas, thank your lucky stars. But for those of us flinching with every agonizing percentile increase of the rand/dollar, it’s time to think outside the box, so to speak. Instead of getting a gift for each member of your family, why not give them one of the many fantastic family games available – it just so happens that Jason will be listing his favourite family games tomorrow. No need to give your favourite couple individual gifts when Patchwork will give them hours of togetherness.

When the last cracker has cracked and the last chestnut has been roasted into oblivion I can’t think of a gift that embodies the conviviality, generosity and harmony of the Christmas spirit more than a boardgame. Can you?

Don’t forget to check out our competition over on Facebook for a chance to win a copy of Dead Man’s Draw!